You are here: Home / Destinations / Asia / The Best Of Everything I Ate in Tokyo, Japan
Some posts on this site contain affiliate links, meaning if you book or buy something through one of these links, I may earn a small commission (at no extra cost to you!). You can read my full disclosure policy here.

One of the things I was most looking forward to during my time in Japan was all the food! If I could only eat one cuisine for the rest of my life, it would most definitely be Japanese food. It has all my favourite things: noodles, grilled meats, chicken karaage and lots and lots of sushi and sashimi. To help guide your food adventures on where to eat in Tokyo, I’ve included restaurant names and addresses. So without further ado, here is the best of everything I ate: I’ve written about this bowl of noodles in my roundup of the best things I ate in 2015 previously and I stand by those words. Tsukemen is a noodle style where the noodles and broth are served separately. You eat, you dip the noodles into the broth and then slurp it up. The broth itself is a lot thicker so that they stick to the noodles better (or at least that is the reasoning I have for it). 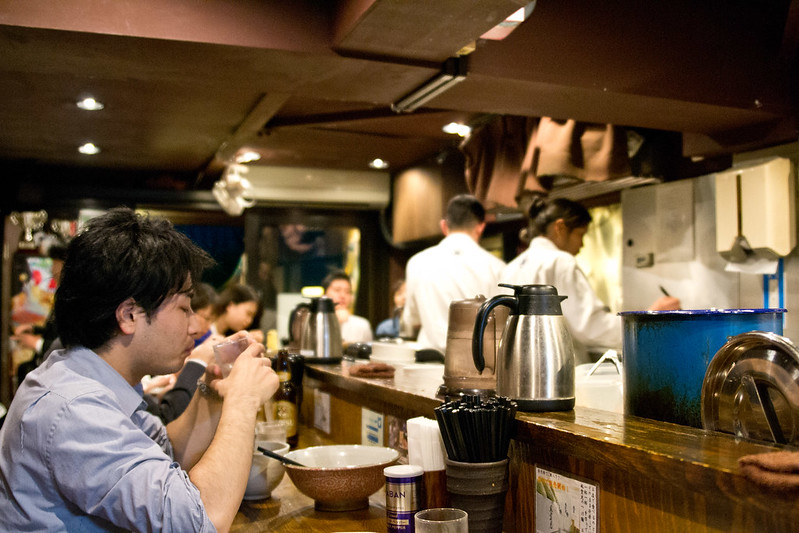 This little noodle shop is hidden under a building in the Shibuya area of Tokyo making it a little difficult to find. We went around in circles before we spotted it. We were lucky when we arrived as there were two seats available. Shortly after, a line started and was out the door by the time we left.

Instead of ordering from a person, you order from a machine. The specialty is tsukemen, but you can select what items you would like served with it. I went with the classic version. Gotta try it in its original form right? 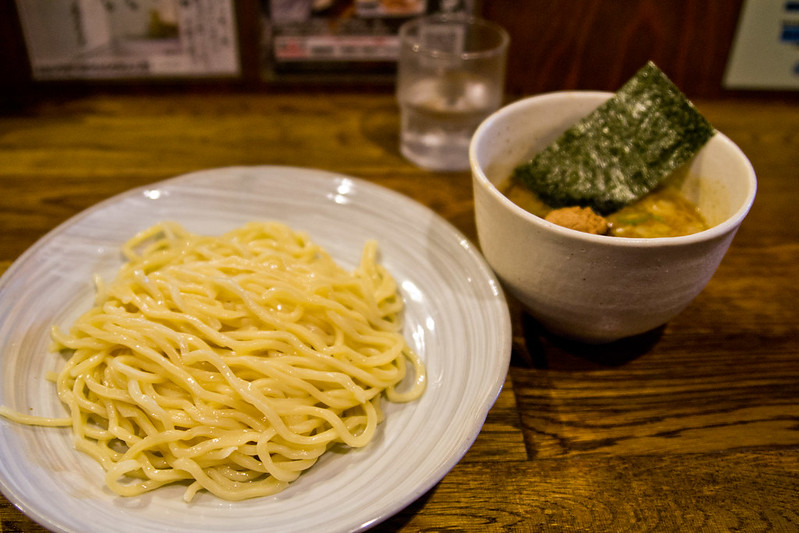 And boy was it tasty! The broth was thick and savoury in all the right ways. The noodles were al dente and when enjoyed together, made for the perfect combo. I’ve since had other bowls of tsukemen both in Japan and at home in Vancouver, but none compares to this. It was amazing. Go seek it out if you’re in Tokyo. 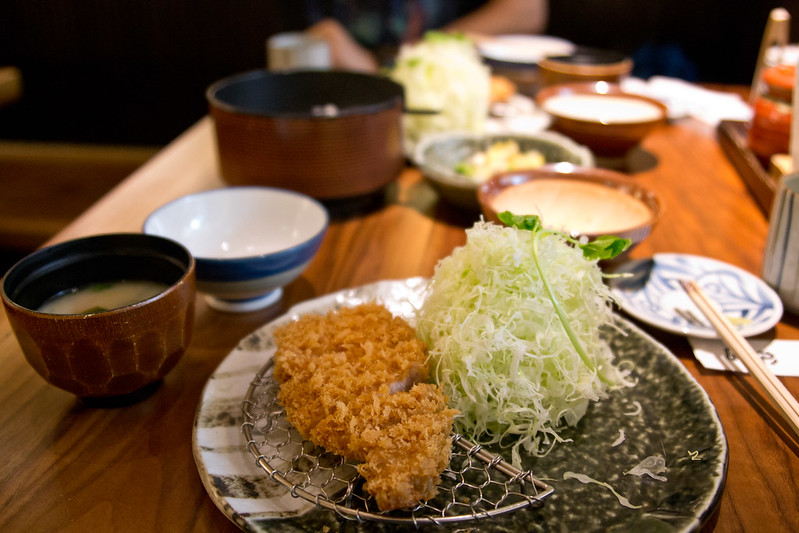 I’ve never been the biggest fan of tonkatsu. I always found the pork to be dry and not very fun to chew. Turns out I’ve just been having bad tonkatsu! My friend found this restaurant located inside a department store that specializes in tonkatsu. You can select the type of pork cutlet you get and how fatty it is. Of course, more fat means more flavour and more tender. Instead of the dry piece of pork I normally get, I was met with a tender and moist pork cutlet. 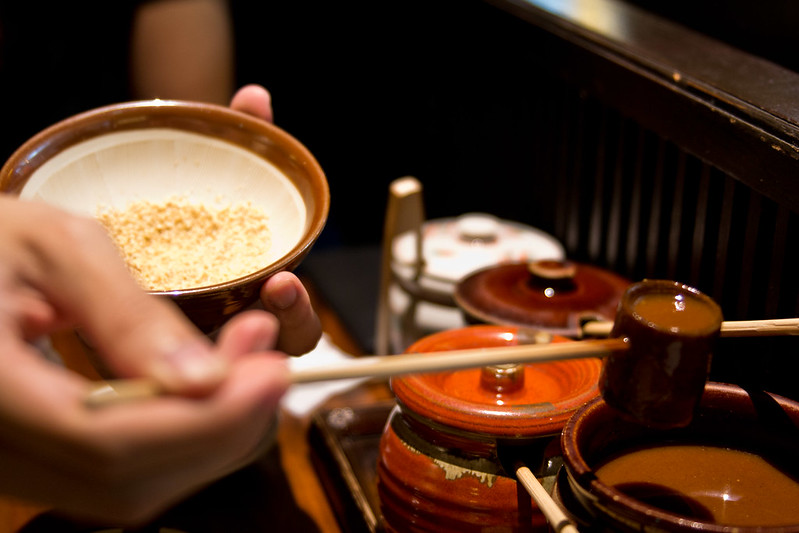 Making your own dipping sauce

The dish came with rice, miso soup, pickled veggies, a variety of dipping sauces and the traditional cabbage salad. I never knew the meal came with so many dishes! The servers were quite accustomed to foreigners visiting the restaurant so they pointed us in the right direction. One fun aspect was pounding your own sesame seeds for the dipping sauce. It made for a very interactive meal, that’s for sure!

When visiting the Tsukiji fish market, you need to grab some fresh seafood while you’re there. After wandering around, we settled on this place because it was busy, but the line wasn’t too long. One dish I always like ordering at a new Japanese restaurant is their chirashi don which is a mixture of sliced raw fish served over seasoned rice. It allows me to try a variety of fish at a reasonable price. While this restaurant isn’t the most famous at the fish market (you’ll need to go to Sushi Dai and brave the long lines for that!), I was pretty pleased with this bowl. It had such a variety of items – some I couldn’t even recognize. It was pretty tasty regardless.

Read more: A Look Inside One of the World’s Largest Wholesale Markets: Tsukiji Fish Market 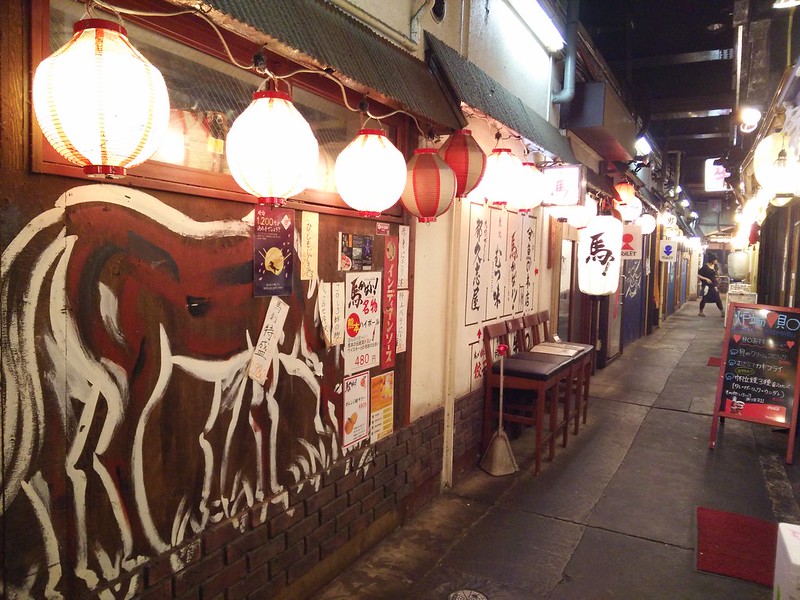 A look down the alley right under the train tracks

Underneath the train tracks in this area on the outskirts of Ginza is a collection of izakayas serving up plates full of grilled meats and tumblers overflowing with beer. Izakayas are essentially bars serving up a variety of alcoholic drinks and food to go along with it. Yakitori are sticks of grilled meat seasoned with a variety of sauces. They also serve grilled seafood and vegetables as well in most places. 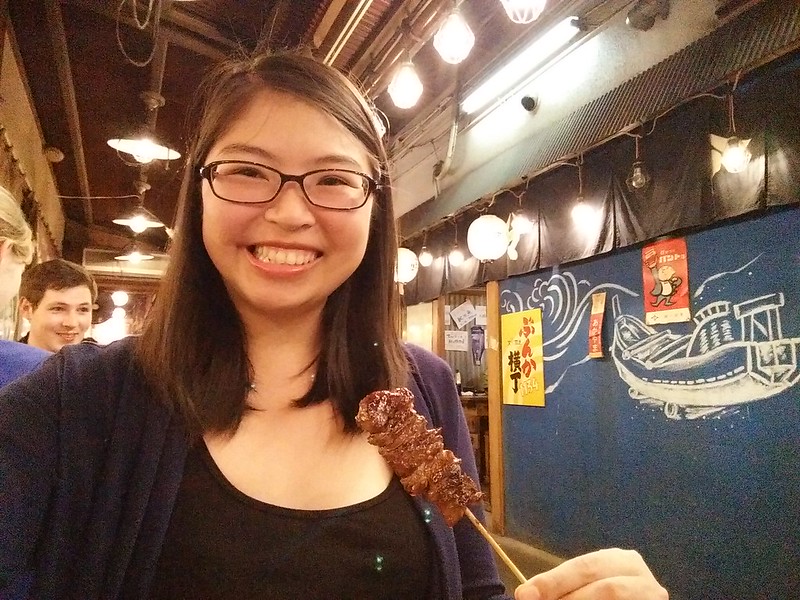 Excited for my grilled meat!

Most of the menus, while there was English on it, were very vague so we really had no idea what we were ordering other than what kind of item it was. I was just happy we didn’t order any chicken liver by accident! We did order what we thought was squid but it turned out to be of a sponge-like texture that we guessed to be a kind of mushroom. 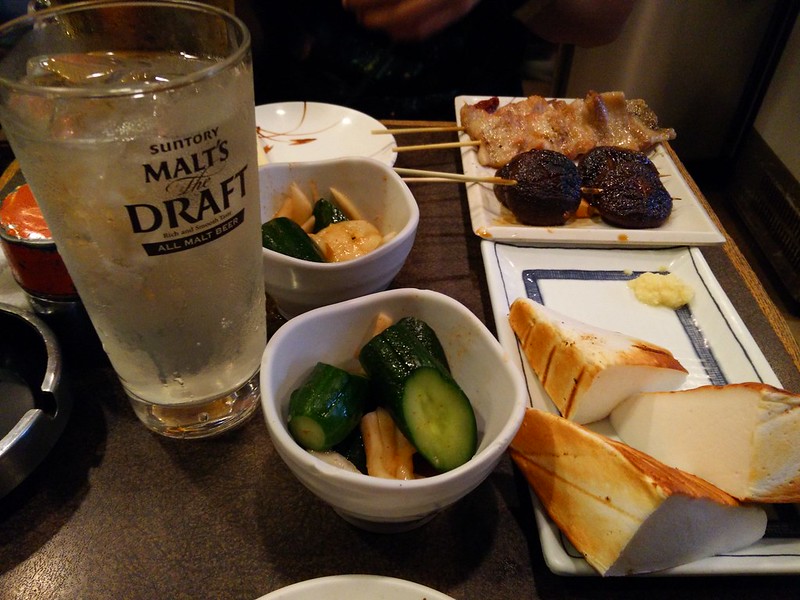 What did we order?! That dish of cucumbers is the otōshi I mention below and that white spongey thing? I think it’s mushroom, but who really knows?

One thing that surprised me was that they charged a table fee. After we sat down, we were given a tiny snack and this is what we were charged for. Apparently these fee is in lieu of an entry fee (in Tokyo, this is called an otōshi). For an evening that we originally wanted to spend izakaya hopping, the prices would have added up quickly due to the addition of these fees! Once we realized this, we just stuck to two izakayas picking busy places buzzing with people. Also, be prepared for the smoke!

Read more: 9 Unique Food Experiences To Have In Japan

Since I’m already on the topic, here are all the other restaurants I visited. While I wouldn’t necessarily recommend them, with the exception of one restaurant, most of them were decent enough if you’re in the area. Here is everywhere else I ate while in Tokyo:

If you like Gundam Wing then a visit to this cafe is a must. With themed dishes, Gundam decor and the anime playing in the background, it’s Gundam everything.

All You Can Eat Yakiniku 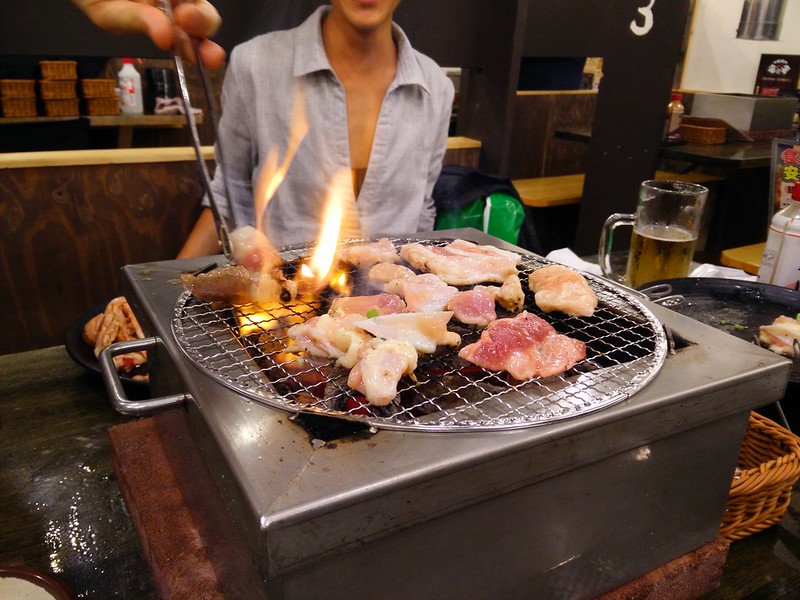 There is nothing more fun than cooking your own meal which is what we did at this all you can eat place. There were no English menus, but surprisingly the servers spoke Mandarin. We left stuffed and smelling of smoke. 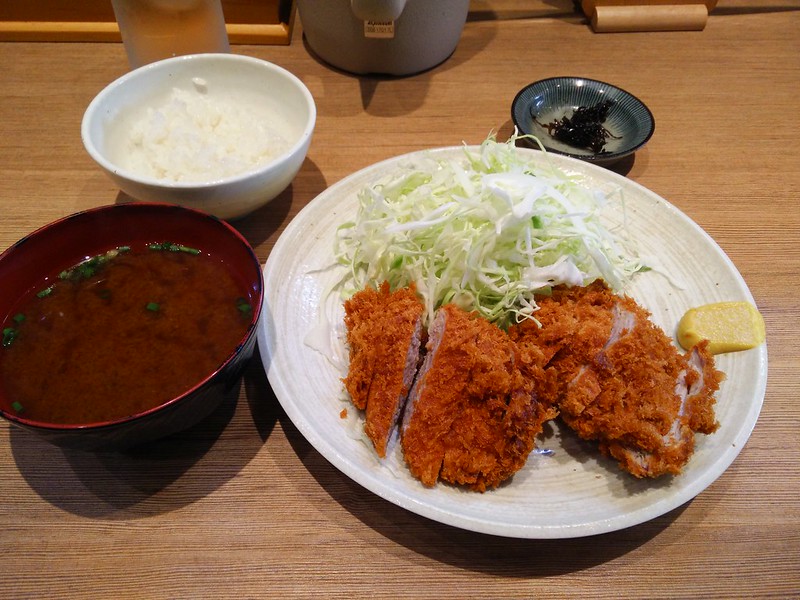 We were looking for food by the Tokyo Tower before heading back to the airport when this popped up. We got there shortly after opening and a line formed rather quickly. While not as delicious as the place I wrote about above, it was still quite tasty. Its location is a bit hidden so good luck finding it! 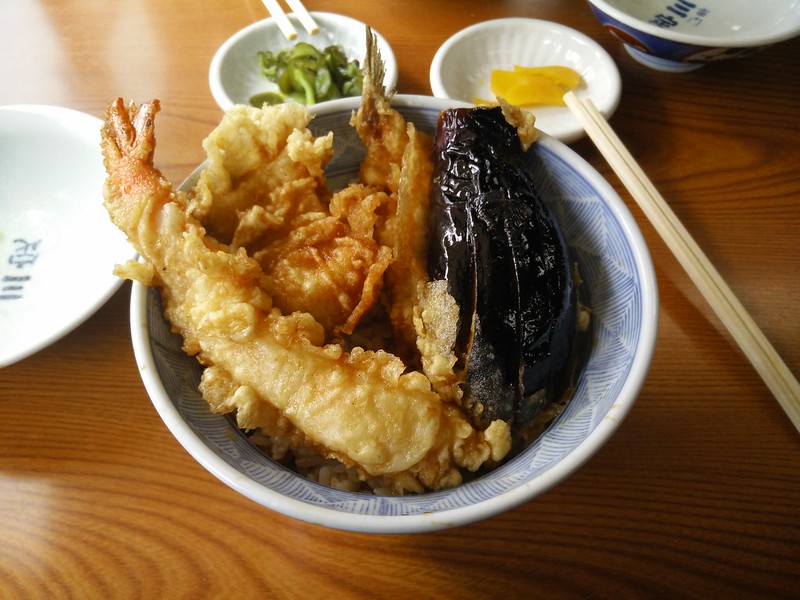 Have you ever had a meal so terrible that you feel like it insulted you? That was this meal for me. The tempura was thick and soggy, not the light and delicate coating that should be on it. There was a line out the door, usually a sign of deliciousness, except I didn’t take into account the location which was right outside the Senso-Ji temple and in a prime tourist location. This was truly atrocious. Avoid at all cost! 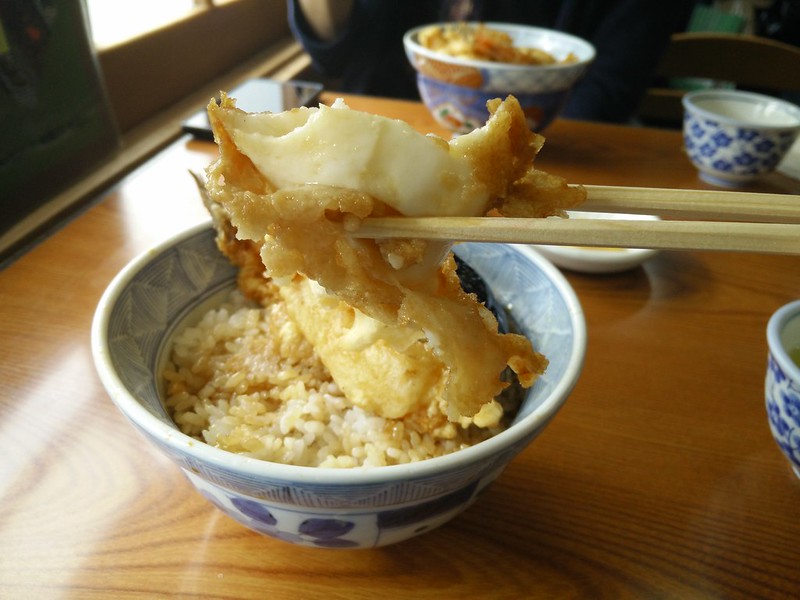 Look at how sad it looks!

So there you have it. The best of everything I ate in Tokyo and then some. I can’t wait to go back to Japan so I can experience more of its food culture. There are so many restaurants and foods I want to try! Have you been to Tokyo? What were some of your favourite meals in the city?

P.S. A Wander Down Dotonburi – Osaka’s Street of Giant Food & An Ode to the Japanese Convenience Store

If you’re new to Pack Me To, welcome!
Stay on top of my travel and food adventures by liking me on Facebook and following me on Twitter , Instagram, and Snapchat