You are here: Home / Destinations / Asia / Inside Yoyogi Park: Tranquility in the Heart of Tokyo
Some posts on this site contain affiliate links, meaning if you book or buy something through one of these links, I may earn a small commission (at no extra cost to you!). You can read my full disclosure policy here.

I always find it fascinating in big cities that they always have a green space right in the middle of the city and I inexplicably find myself in them. Central Park in New York City, Hyde Park in London, Stanley Park in Vancouver, and of course, Yoyogi Park in Tokyo.

Maybe I gravitate to the greenery because I’m surrounded by it at home? Who knows. Regardless, there is always something interesting to be found in a park, even if you’re just people watching or having a picnic. However, Tokyo’s Yoyogi Park had one strange aspect different from all the large parks I’ve visited elsewhere. There were no benches. No grass to spread out on. No one was really dawdling. 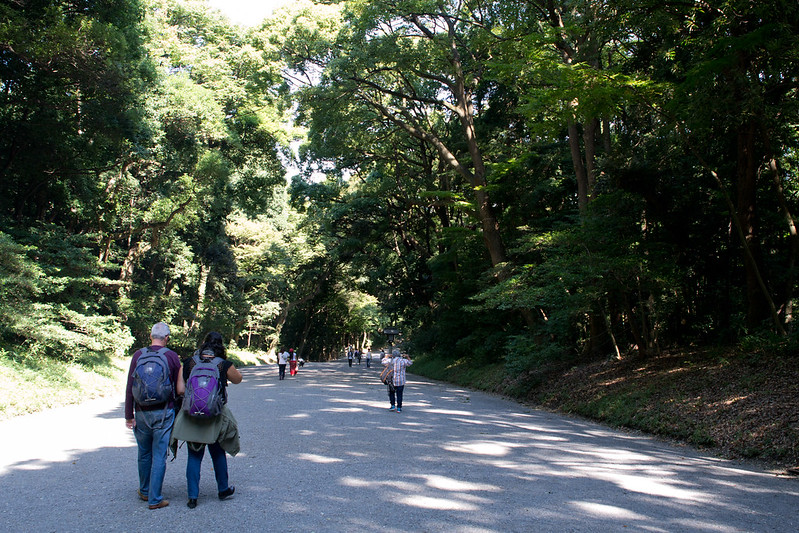 In fact, I found this trend across most of the parks and green spaces I visited in Japan. Strange. I missed the benches the most as I always need a place to sit and rest, especially when wandering around a park as large as Yoyogi. The park is incredibly clean (as with much of Japan) and I found it very entertaining to watch someone “sweep” the path of rocks void of any leaves. The washroom was probably one of the fanciest of public washrooms I’ve visited in a park. It was even worthy of a photo! 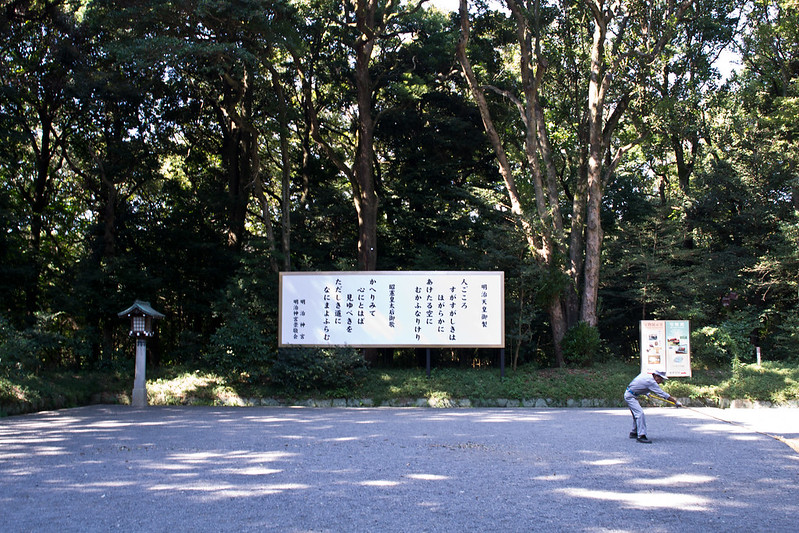 Sweeper with his massive rake on the right

The main attraction in Yoyogi Park is the Meiji shrine. It, surprisingly, doesn’t have as long as a history as you would imagine. It’s only approaching its 100th birthday. In fact, the forest that the shrine is located in was planted during the shrine’s construction, consisting of trees donated from regions across the country. 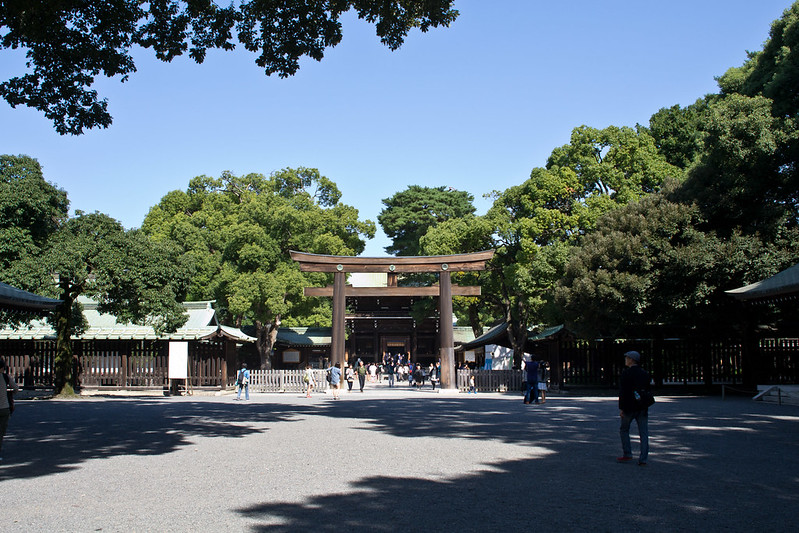 Entrance to the shrine

The shrine was completed and dedicated to the Emperor Meiji and the Empress Shoken in 1920. It was destroyed during World War II, but was rebuilt after. Emperor Meiji was the first emperor of modern Japan and it was under his leadership that Japan started down the path of modernization and westernization.

Along the way to the shrine, you walk through a series of wooden torii gates which are some of the largest ones in the country according to a few of the plaques we walked by. 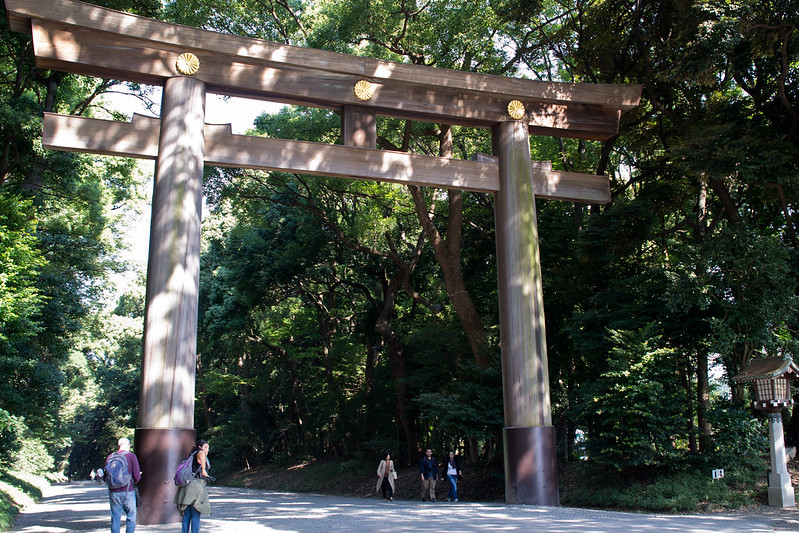 The Meiji shrine follows the practices of a Shinto shrine which are different from the practices I’ve seen at other places of worship. It regularly hosts Shinto weddings and festivals throughout the year and is also home to two sumo dedicatory ceremonies in January and October.

A section of the path is lined with empty sake barrels on one side and wine barrels on the other. Sake has been long associated with the Shinto gods as it is said to bring the drinker closer to the gods. 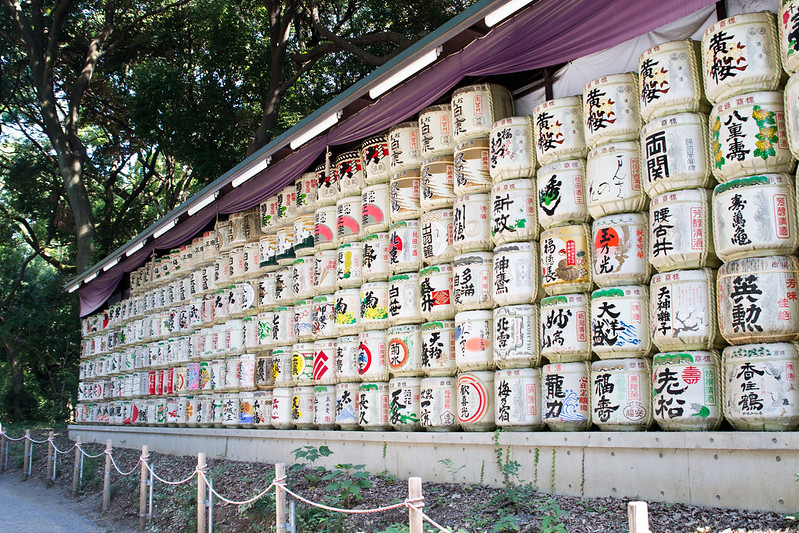 You’re likely to find these barrels by Shinto shrines. Brewers donate sake and barrels to the shrines as a way of asking gods for prosperity for their business. 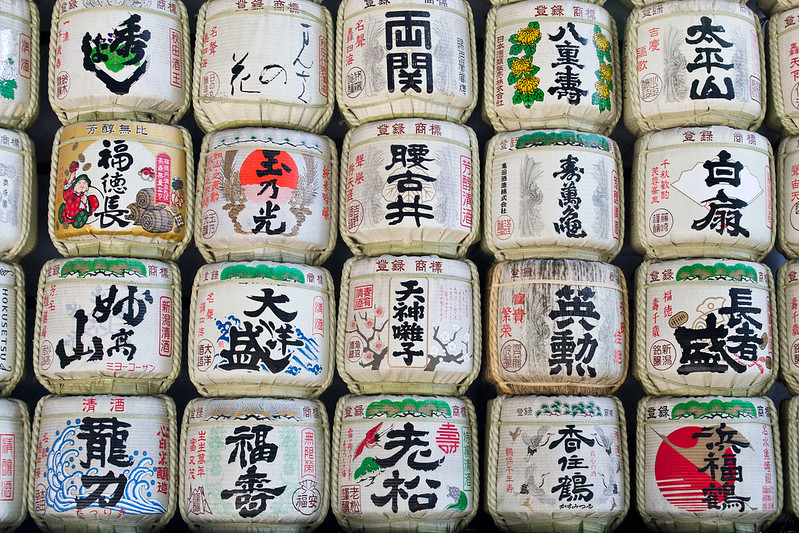 Loving the different designs of the barrels

At the shrine’s main buildings you can make offerings at the main hall, purchase charms or write out a wish on a wooden plate called an ema. 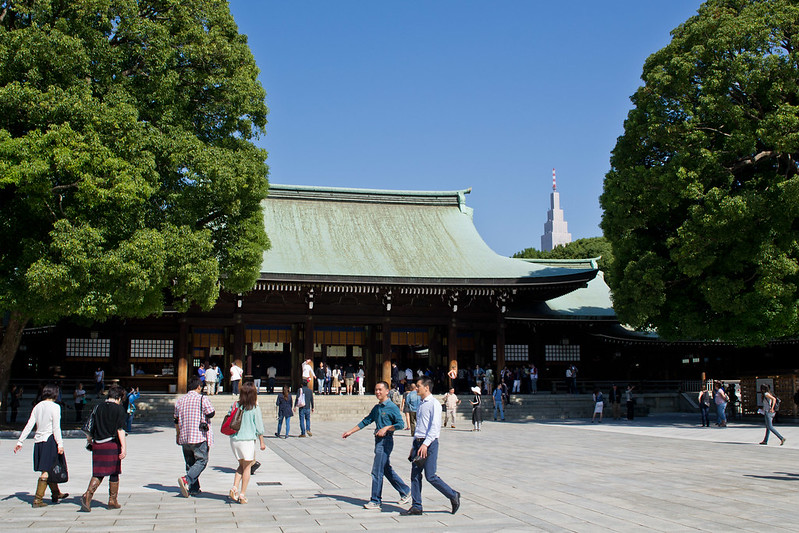 The main building of the Meiji Shrine

However, before entering the shrine, you’re asked to purify yourself using a water basin with a dipper. The prayer / offerings ritual involves bowing and clapping which is interesting to see in person. 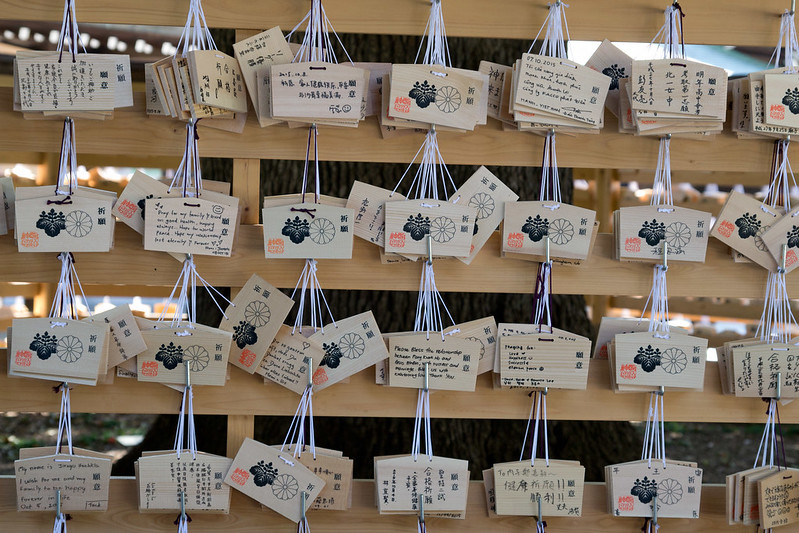 Close up on the ema

There are a few other buildings that you can visit, but we opted to skip them. The Treasure House displays the personal artifacts of the Emperor and Empress. The Inner Garden is especially popular in June when irises are in bloom. Both are 500 yen to visit.

Once you’re in the park, you really can’t hear the city at all even though there is a train line right next to it. The quiet is a welcomed one after the craziness that Tokyo can be for the first time visitor. That said, despite the quiet and beauty of the park and shrine, if you’re visiting other shrines and temples in Japan (especially around Kyoto), then I would suggest not visiting Meiji shrine. Especially so if you only have limited time in the city.

The Shrine can get quite busy on the weekends with worshipers. If you’re jetlagged (as we were), a visit to the shrine in the early hours is recommended. It opens quite early throughout the year. Check their calendar of events to see if your visit falls within one of the shrine’s festivals.