You are here: Home / Destinations / Europe / Austria / A Wander With the Dead – Vienna Central Cemetery
Some posts on this site contain affiliate links, meaning if you book or buy something through one of these links, I may earn a small commission (at no extra cost to you!). You can read my full disclosure policy here.

I’ve recently discovered that exploring cemeteries are really interesting. For the longest time, I thought visiting them was a little creepy, especially when traveling, but times have changed. When I was in Vienna, I made the trek out of the city to visit the Zentralfriedhof, aka the Central Cemetery, mainly because I wanted to see the memorial to Mozart and other composers, but also because cemeteries in Europe are fascinating to walk through. Dating back hundreds of years, every tombstone tells a story. I see them as elaborate works of art with plenty to say about the person buried there as well as the individual who created the tombstone. 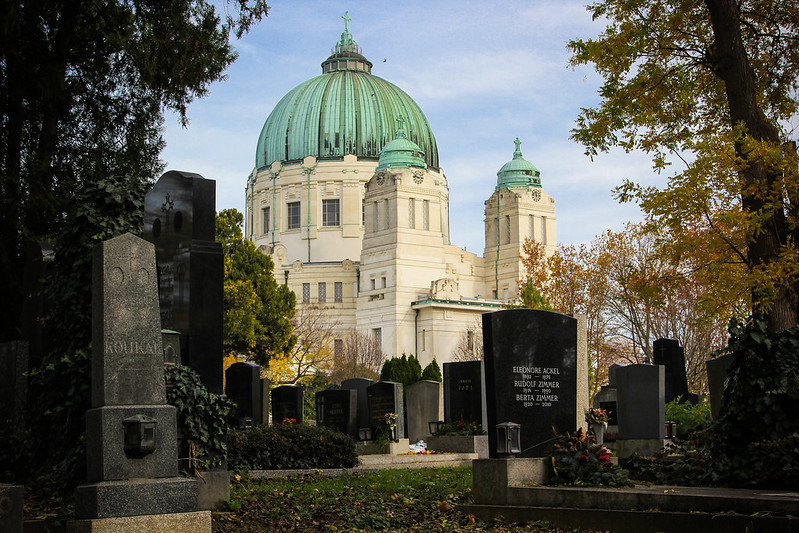 The Central Cemetery is the final resting place of a number of notable figures, including people with accomplishments in literature, music, politics, medicine, among other fields. It was used as a cemetery from 1874 and is Vienna’s largest cemetery by far at 2.4 square kilometers. There are 330,000 graves and 3.3 million people have been buried here. It is the second largest cemetery in Europe by area after Hamburg’s Ohlsdorf Cemetery, and the largest cemetery by the number of interred in Europe. Zentralfriedhof has a dead population of almost twice the present living residents of Vienna. Today between 20 – 25 burials take place every day. 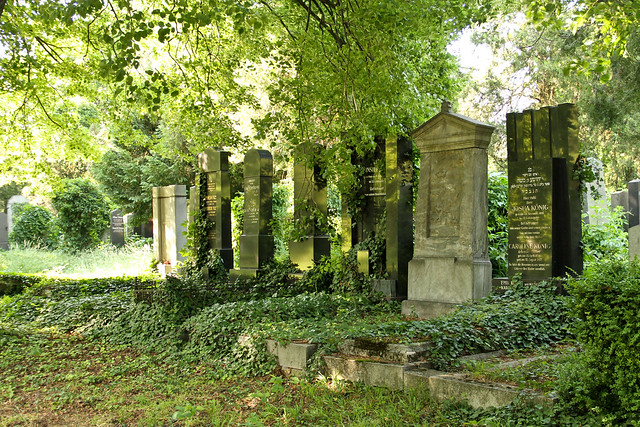 Doesn’t this seem like a scene from The Secret Garden? Photo: a_kep

The Central Cemetery was no different than other European cemeteries with a diverse number of tombstones, memorials and sculptures. Some are laid to rest in big mausoleum-like structures and others are marked with more modest tombstones. Some areas are completely overgrown with trees and plants, others are neatly groomed with pathways and walkways. In many ways, it didn’t even seem like you were in a cemetery – you were just out for a day in the park and there happen to be many sculptures that stand for tombstones around. 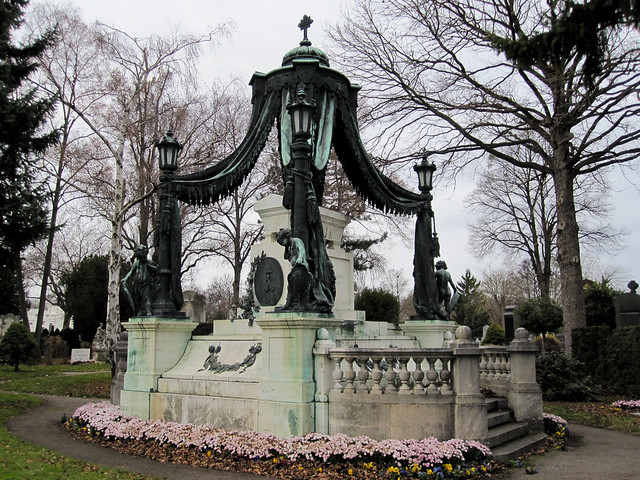 Who wouldn’t want to be buried in something like this?

The winter day was gloomy, and slightly cloudy making for perfect atmosphere for exploring a cemetery. Not a single soul was to be seen for as far as I could see, except for the lone gate keeper who came out to greet us.

Look how big this place is!

St. Marx was very big to wander through. It even has its own bus service to take you around! The cemetery is marked off into different areas and there is a map at the entrance for your reference. At the very center of the cemetery stands an imposing church – the Karl-Borromäus-Kirche, named for the former mayor of Vienna who rests below the high alter of the building. The presidential crypt and honorary graves are directly in front of the church. 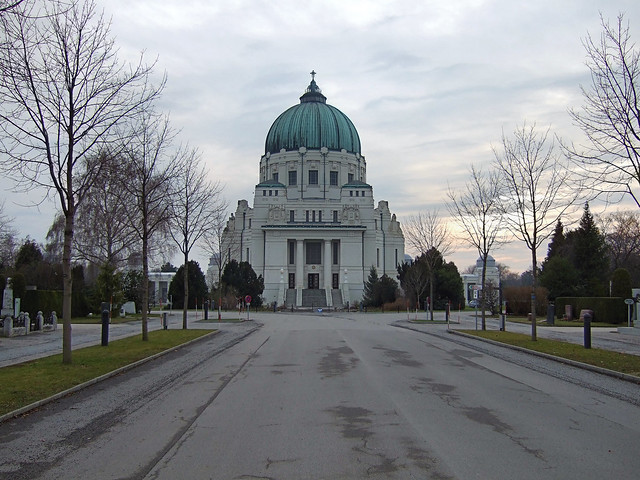 At the time of its opening, the cemetery caused quite a stir. The intention was to have individuals from different faiths be interred in the same burial grounds, which was a big no-no at the time. They were able to compromise and now there are many different areas to the Central Cemetery: a Catholic area, a Protestant area and two Jewish areas. Those from the various Orthodox churches also have their respective areas as do Muslims. Since 2005, there is also a Buddhist cemetery within the Central Cemetery.

The most interesting section, to me at least, being the music nerd that I am, was the area called ehrengrab which is German for “graves of honour.” Here, individuals who have made extraordinary service or achievements in their lifetime are honoured. When the cemetery was first built, it was quite far away from the rest of the city, and they needed some sort of attraction to get people to visit. Their answer? Play to Vienna’s strengths and bury well known people, like composers, on its grounds.

The graves of Beethoven and Brahms

Famous citizens such as Ludwig van Beethoven and Franz Schubert were exhumed and transferred to the cemetery in 1888, others, like Johannes Brahms (in 1897) and Johnan Strauss II (of The Blue Danube fame – 1899), were buried there outright. And so today, hundreds of graves of honour are found. Individuals who are renown in the areas of music, poetry, science, architecture, painting, invention, acting, politics or sport are buried here.

It’s kind of strange when you think about it – the Viennese government used the deaths of its famous citizens to bolster the attractiveness of a burial ground. Clearly it has worked because many people (me included!) make the trek out to visit the graves found here. 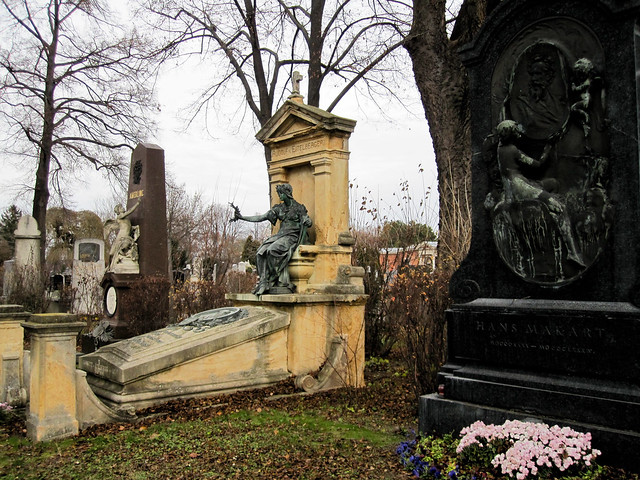 There is so much to see and explore on the grounds. I could easily spend a couple hours wandering around, looking at all the graves and wondering about the lives of those who lived before me. It is a quiet escape from the busy city. I only saw a handful of people during my time there and they were mostly in the ehrengrab area. It did feel strange to be taking photographs, so I’ve supplemented my own with a few I found on Flickr.

Do you like visiting cemeteries when you travel? Which ones have you visited? Will you be visiting any on your travels or do you find it a little creepy?

Getting there: Google transit instructions will tell you to take the S-Bahn and then walk to the entrance. It’s a long way to go, especially as the main entrance is on the other side (there are other gates on the backside, but I’m not sure about them as I didn’t enter that way). Instead you can take the U3 to Simmering and then tram 71 from there. You’ll want to get off at Gate 2 the main entrance. We accidentally stayed on an extra stop and ended up entering through Gate 3 which is the Protestant cemetery area.

There is an audio guide available from the gate attendant at Gate 2. It is €7 and you will need a valid photo ID. The tours vary from 2 – 4 hours in length.

« Best Reads: March 2014
The Other Palaces of Vienna: The Hofburg and The Belvedere »