You are here: Home / Destinations / Become One With the Art at the Trick Eye Museum in Seoul
Some posts on this site contain affiliate links, meaning if you book or buy something through one of these links, I may earn a small commission (at no extra cost to you!). You can read my full disclosure policy here.

After my awesome experience at Minatur Wunderland in Hamburg, I’m all for quirky and unique museums now. When I was in Seoul, beyond checking out the palaces and temples, I wanted to visit the Trick Eye Museum. 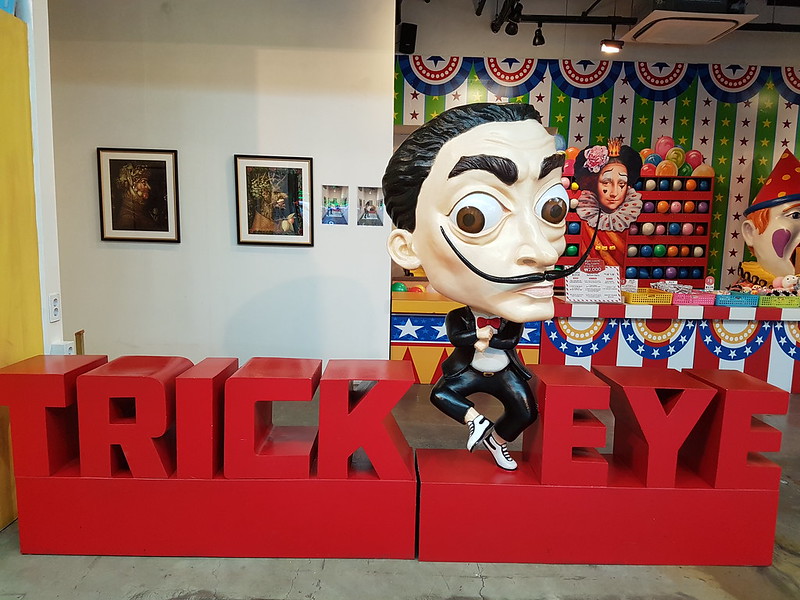 What is the Trick Eye Museum you ask? It’s exactly what the name says – a museum where you interact with the displays, almost as if you are a part of the painting, snapping photos that trick the eye. The paintings are created using ‘trompe l’oeil’ techniques that give each 2D art piece the illusion of being in 3D.

My other half wasn’t so convinced. At first, he just wanted to send me on my own, but having seen some of the photos others have taken at the museum, I was adamant that he come along with me. At the end of it all, he said it was a ton of fun and one of the highlights for all you skeptics out there. 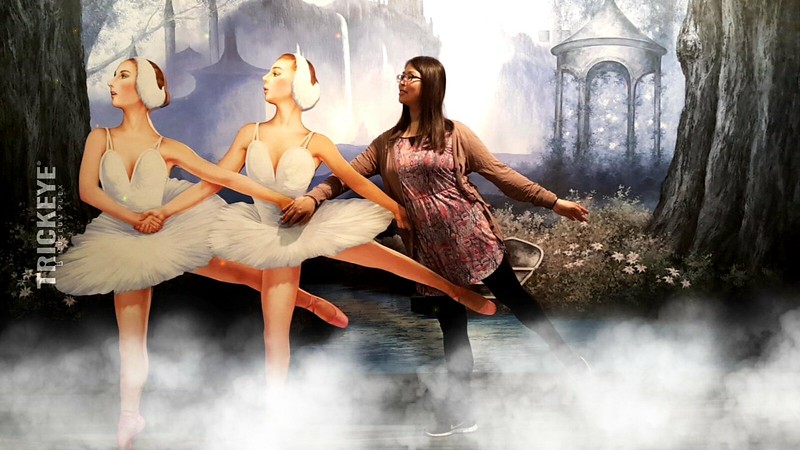 The entrance ticket was a bit hefty at 35000 won or about $35 dollars Canadian each. They were running a promotion which reduced it by 5000 won per person if you downloaded their augmented reality app. I hate adding bulky apps to my phone, but the discount incentive was enough (especially for two people), and little did I know that the app would actually add a TON of fun to the experience. The ticket price also included entrance to the Ice Museum that is right next door. However, it seems that they’ve reduced their price to a much more reasonable 15000 won. 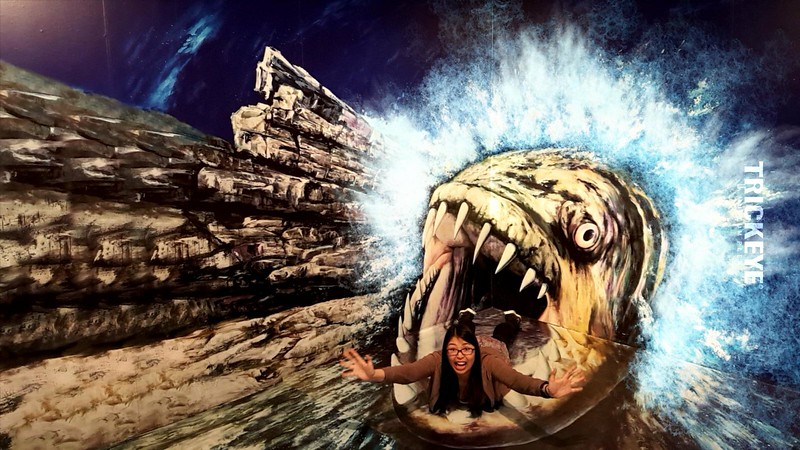 When you walk in, there are overwhelming amounts of things to look at. Bright murals in every direction all trying to grab your attention. I felt like a kid in a candy store, not sure which one to go to first. 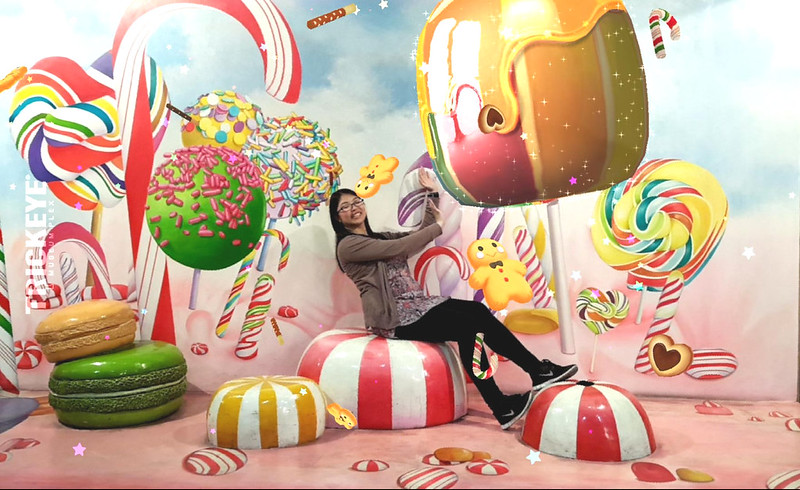 There are often plaques by each of the photo opportunities showing you how to best take the photo. There are also markers telling you the best angle to take the photo from. However, it was more fun trying to figure it out for ourselves. 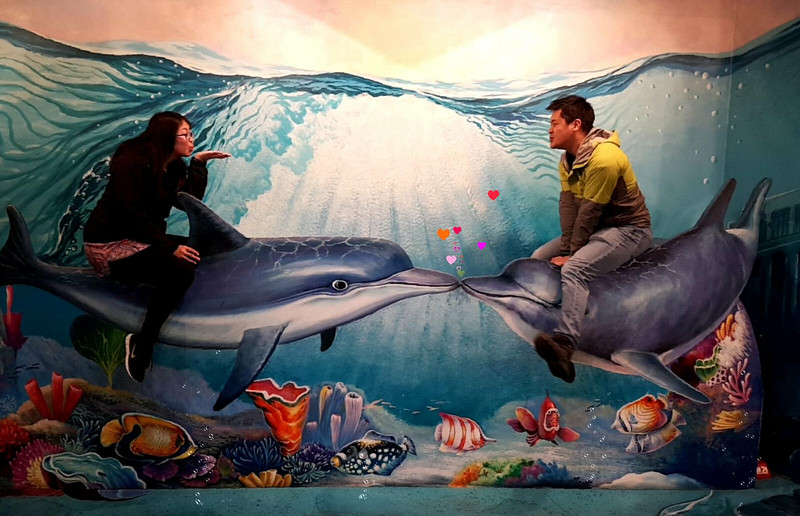 In order to get our pictures, we teamed up with another couple. They took our photos while we snapped theirs which worked out perfectly. It did mean you have to move through the museum together, but you can easily go backwards as well.

The augmented reality app they asked us to download, brought the images to life. From getting snapped at by a snake to getting drowned by water, it was fun to see it all play out on your screen.

Of course, when you’re in front of the camera, you don’t see what’s happening on the screen until after it’s filmed which made for some hilarious footage. You definitely have to try a couple times to make sure it works out properly. 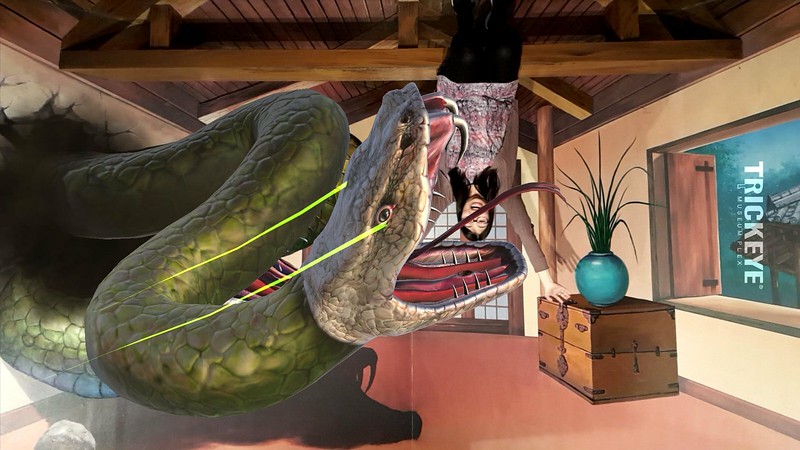 I wasn’t the biggest fan of the quality of images that came from the app. I felt like they degraded anything that my otherwise decent phone camera took. I also really hate that watermark they put on everything. There was no option to turn it off, but you couldn’t see the augmented reality stuff without it. Also, be aware that using the app uses your phone battery up really fast so bring a battery pack!

Going in the offseason was good because I can see how quickly the museum can fill up with visitors. While we were there, there were a handful of other groups there and we occasionally had to wait. Any more people and it would have been a frustrating experience.

Also, some of the murals looked a bit worn from years of use. Someone needs to go around with a touch-up brush! However, this is only really noticeable when you look up close and you can’t really tell in the photos you end up taking.

There are also Trick Eye Museums in Busan and Jeju in South Korea as well as overseas locations in Singapore and Hong Kong.

When you’re in Seoul, do something a little different and head to the trick eye museum. It’s a lot of fun and you’ll leave with a ton of great and hilarious photos and video.

Have you been to a similar type of museum?

« A Look At 2017 Through Food – My Best Meals
Spending a Night in a Capsule Hotel in Tokyo, Japan »