You are here: Home / Destinations / Asia / Visiting the World’s Cheapest Michelin Star Restaurant: Tim Ho Wan, Hong Kong
Some posts on this site contain affiliate links, meaning if you book or buy something through one of these links, I may earn a small commission (at no extra cost to you!). You can read my full disclosure policy here.

Dim sum or yum cha is ubiquitous in Cantonese culture. It’s a time where friends and family come together to eat well and catch up over small dishes of dumplings, rice and lots of meat all washed down with a hot cup of tea. When family comes to visit, you go to dim sum. On special occasions, you go to dim sum. Dim sum is an event, a part of the cultural identity of being Cantonese.

And in Hong Kong, it’s no different. 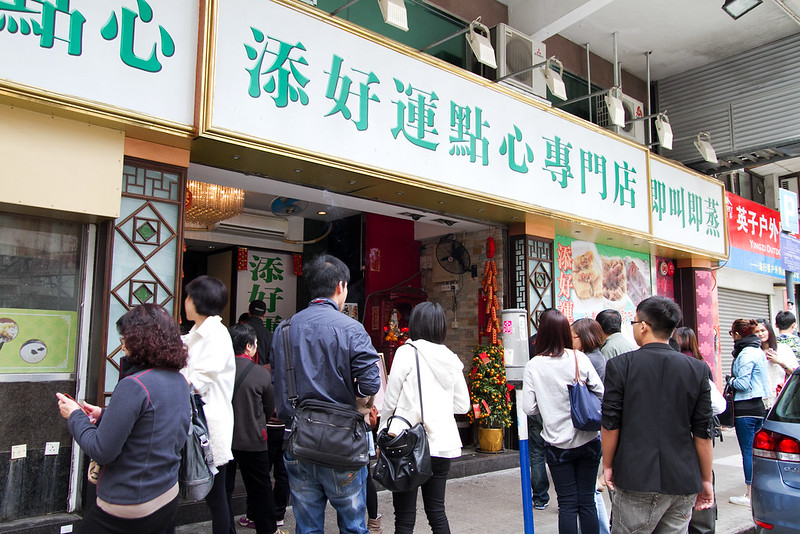 I completely failed in taking a photo of the storefront! Photo: Robyn Lee

Tim Ho Wan, which literally translates to “add good luck”, was opened by the former dim sum chef of the Hong Kong Four Seasons hotel, Mak Kwai Pui, in 2009 with a small restaurant of 30 seats in Mongkok. Diners were promised high quality dim sum at reasonable prices with dishes made in house and never frozen.

From the get go, it was a success and it wasn’t before long it caught the eyes of the Michelin folk who awarded the restaurant its star in 2010. Demand quickly grew and the restaurant has since expanded to 4 other locations around the city and internationally in Singapore, the Philippines and has its eyes set on Australia in 2015. However in 2013, due to rent increases, the original Mongkok location closed.

Now the Sham Sui Po location is your only choice for a certified Michelin star meal. So naturally, that’s the one we went to. With reports of long lines stretching down the street, we woke up early and arrived at the restaurant just after opening at 8:30. There was no line. In fact, the restaurant was still half empty when we showed up. We were quickly seated and an ordering sheet thrust into our waiting hands.

Despite its Michelin star status, the restaurant doesn’t let it go to its head. During our visit, it seemed like we were the only tourists who made the trek out bright and early for a taste. Other tables were filled with locals, those who called this neighbourhood home.

The place mats on the table thankfully were full of photos and we were able to figure out exactly what we wanted to order. There is English on the menu, but you’re never too sure if the English translation is correct. Dishes range in prices anywhere from $15 – $25 HKD. There is also a per person tea fee which is normal.

Quickly bamboo steamers came flooding out of the kitchen onto our table. None of that dawdling over the dishes. These guys meant business. They wanted you to eat and then get out.

First impressions of all the dishes were of how small everything seemed. I had dim sum a couple days prior at another restaurant and portions there were significantly bigger. Everything tasted as it should, but nothing stood out as being exceptionally stellar.

The biggest disappointment was the steamed rice with beef and pan fried egg. I hated the beef mixture. Certain herbs that I couldn’t quite pick out were included in the mix which gave it an odd taste and the texture was mushy and wet, like it wasn’t properly cooked. Except that it was. It’s nothing like the beef and pan fried egg rice that I get here at home. We didn’t finish that one. In hindsight, I wish I had ordered the chicken feet and sparerib steamed rice. Mmm chicken feet.

But the crowning dish – the reason people go to this restaurant are for the BBQ Pork Buns. In hindsight, we should have ordered two plates of these, they were so delicious. Most dim sum restaurants offer a steamed version of the BBQ pork bun where a white fluffy dough encases the sweet and savory pork inside, however, the one at Tim Ho Wan is on a completely different level.

Just look at that crust! Droool

The bun was baked and on top had a crumbly crust, similar to that of a pineapple bun. Biting into the bun was like biting into a pillow of deliciousness. There is a slight give to the thin bun, the crust crumbles into your mouth and then the delicious pork hits you. The perfect combination.

I probably could have skipped the rest of the meal and just had order after order of these buns. They were that good. Perhaps other items on the menu were tastier than the ones we ordered, but I’ll definitely never order anything with minced beef in it again.

I’m glad we didn’t have to line up for an hour for this meal, otherwise I probably would have gotten quite angry after the meal. Based on reviews and word of mouth recommendations, I was really looking forward to trying this place out for myself. In the end, I was pretty disappointed. Sure it’s good dim sum for very reasonable prices, but it just didn’t live up to the hype.

So if you decide to make the trek out to this institution, go early and go for the BBQ buns.

Have you been to Tim Ho Wan before? Or any dim sum restaurant? What was your experience like?

« The Unspoken Rules of Dining Out in Hong Kong
Things to Consider When Planning a Trip to Athens, Greece »