You are here: Home / Destinations / Asia / Craftsmanship and Artistry at the Takayama Festival Floats Exhibition Hall
Some posts on this site contain affiliate links, meaning if you book or buy something through one of these links, I may earn a small commission (at no extra cost to you!). You can read my full disclosure policy here.

Takayama is famous for a variety of things. Its Old Town that dates back to the Edo period. Its Hida beef. Its sake breweries. And for being host to the Takayama Matsuri festival.

The Takayama Matsuri dates back to the 16th and 17th century under the rule of the Kanamori family. Over the years as carpenters and other artisans became more skilled in their work, the floats, reflecting this growth, also became more elaborate and decorative. 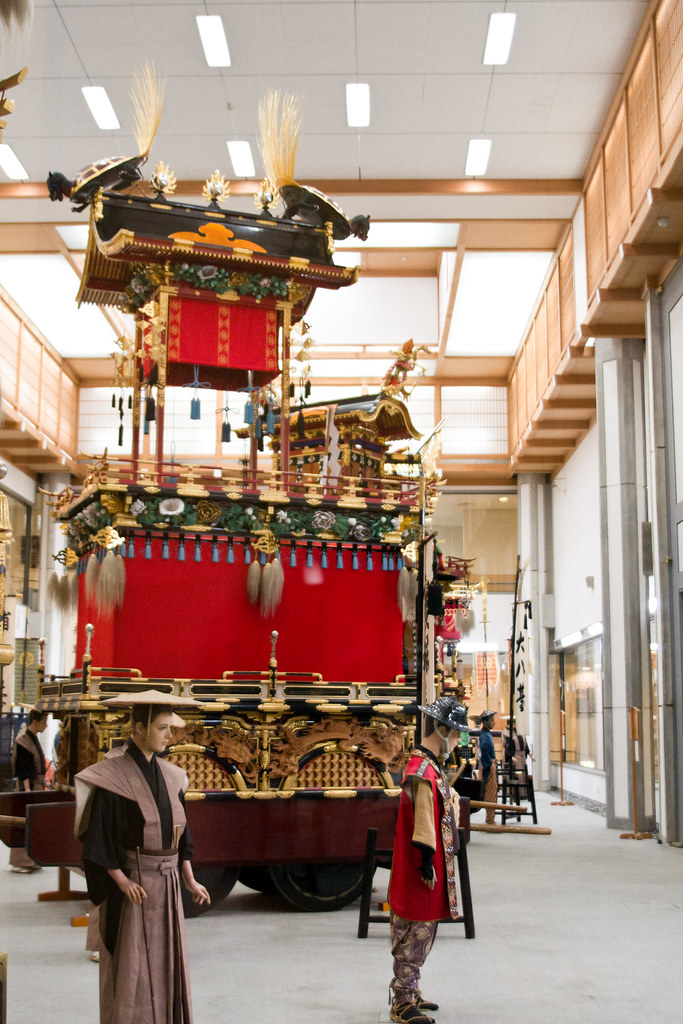 This festival is held twice a year in Takayama: once in the spring (April 14 and 15) and once in the fall (October 9 and 10). The spring festival or Sannō Matsuri (山王祭り) is a prayer for a good harvest in the coming year whereas the fall festival, held after crops are harvested, is for giving thanks. The fall festival or Hachiman Matsuri (八幡祭り) is one of Japan’s three largest festivals with the other two being Kyoto’s Gion Matsuri and the Chichibu Matsuri. 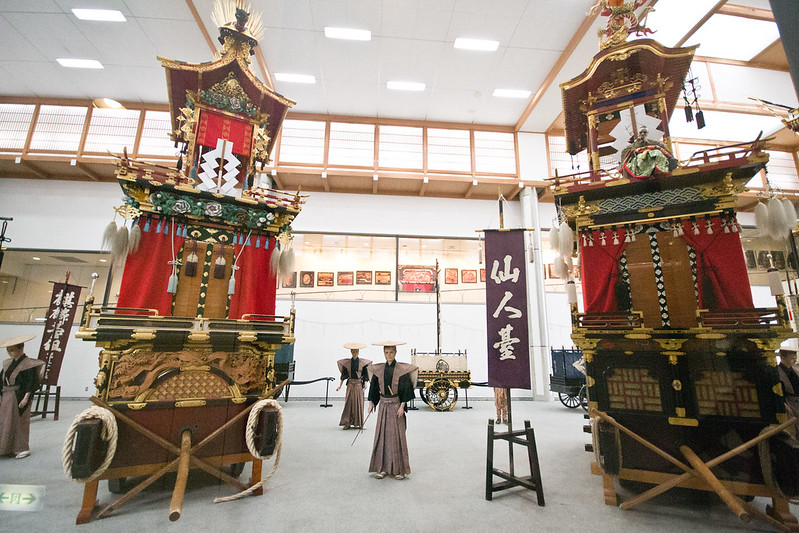 During the festival, 11 decorated floats, or yatai, are pulled through Takayama by people at night. Traditional lanterns on each of the floats are lit before it is taken around the city by people dressed in traditional clothing. Each of the floats is elaborately decorated, often a reflection of the district the float came from, and topped with a karakuri or marionette. The marionettes, a symbol of the fine craftsmanship found in Takayama, are operated by strings and push rods from inside the float. 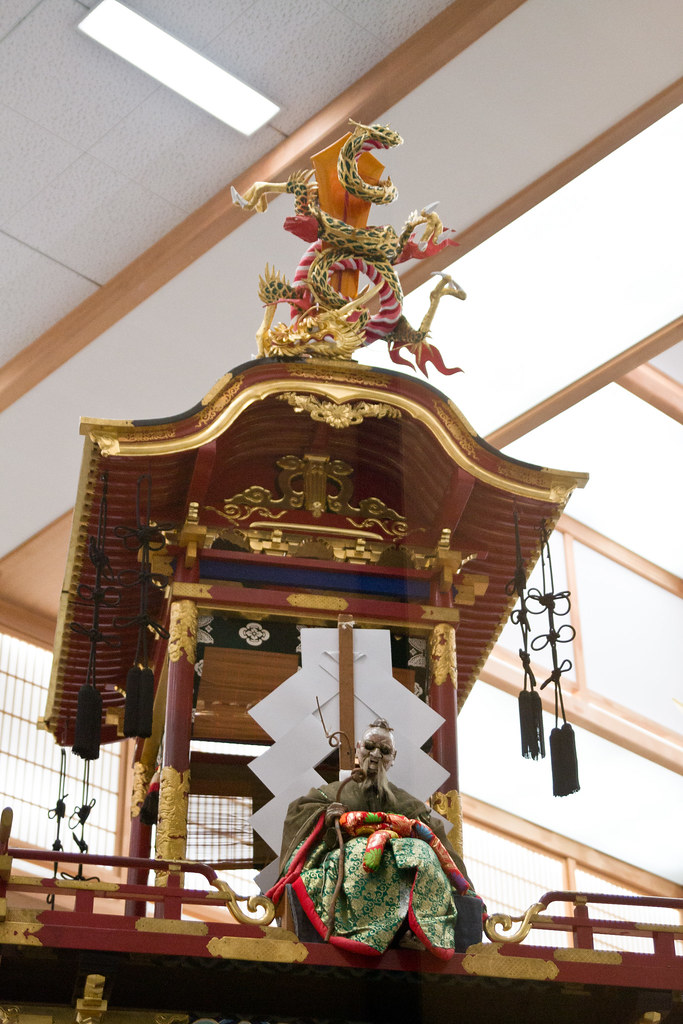 You can see the marionette clearly on this float 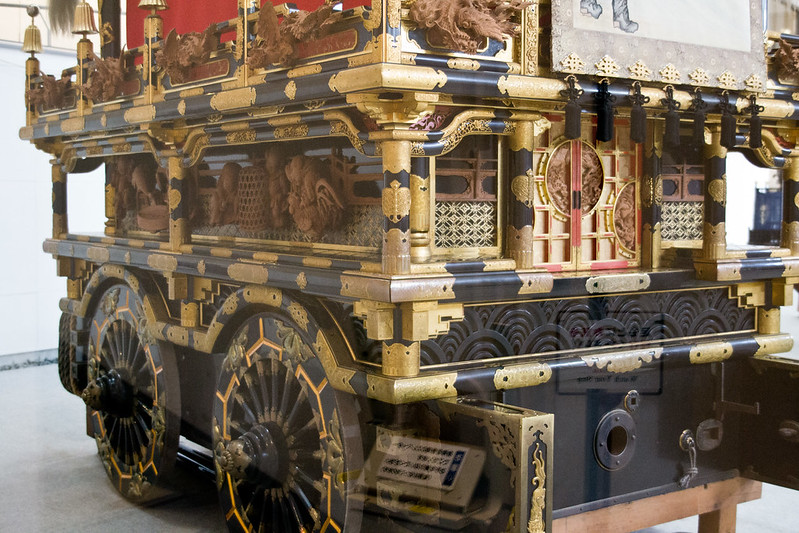 Look at all that intricate carving! 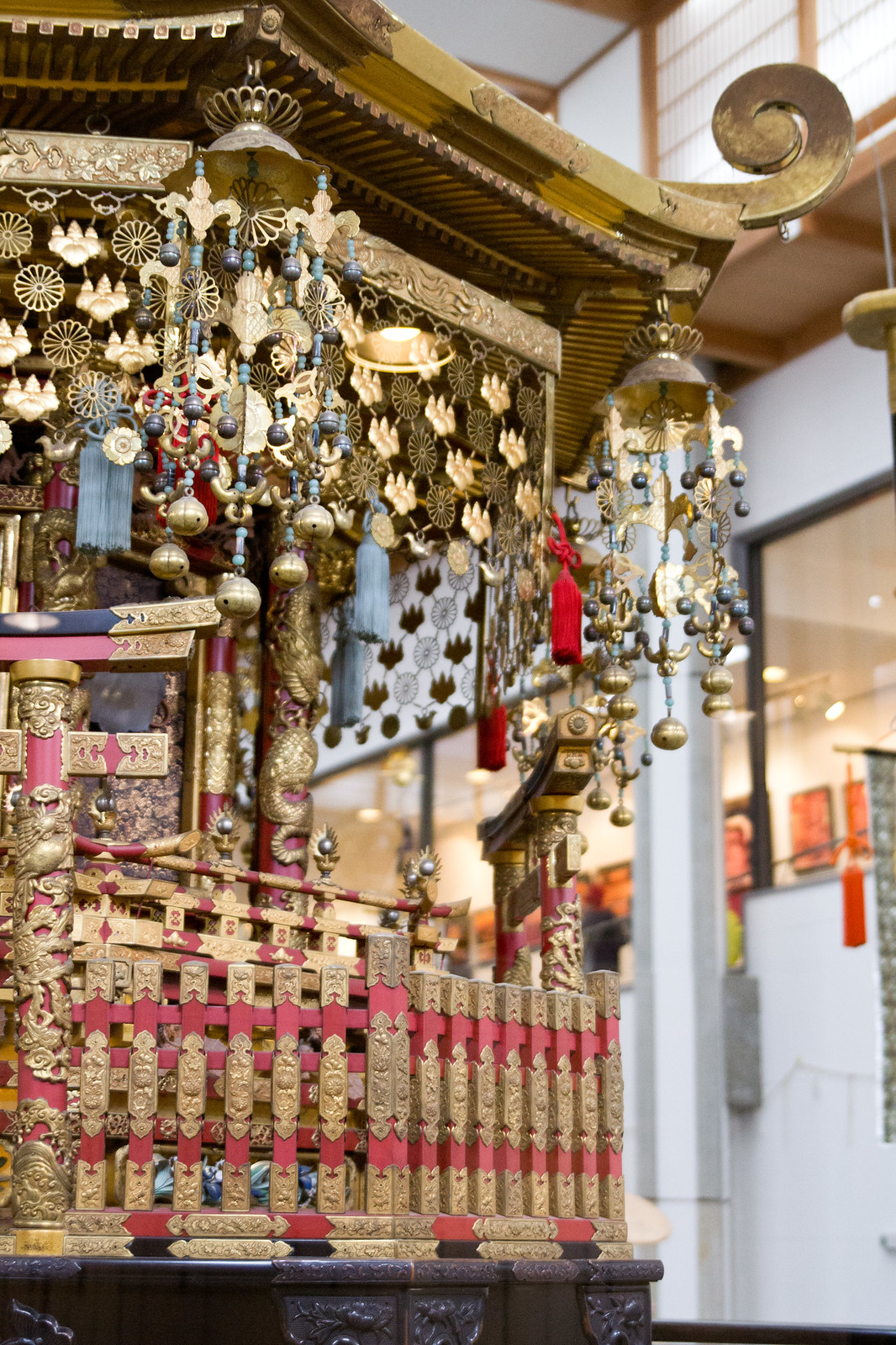 Even though I was visiting in the spring, I was going to miss the festival by about a month much to my disappointment. However, I was pleased to find out that I could actually see some of the floats in person at the Takayama Festival Floats Exhibition Hall. 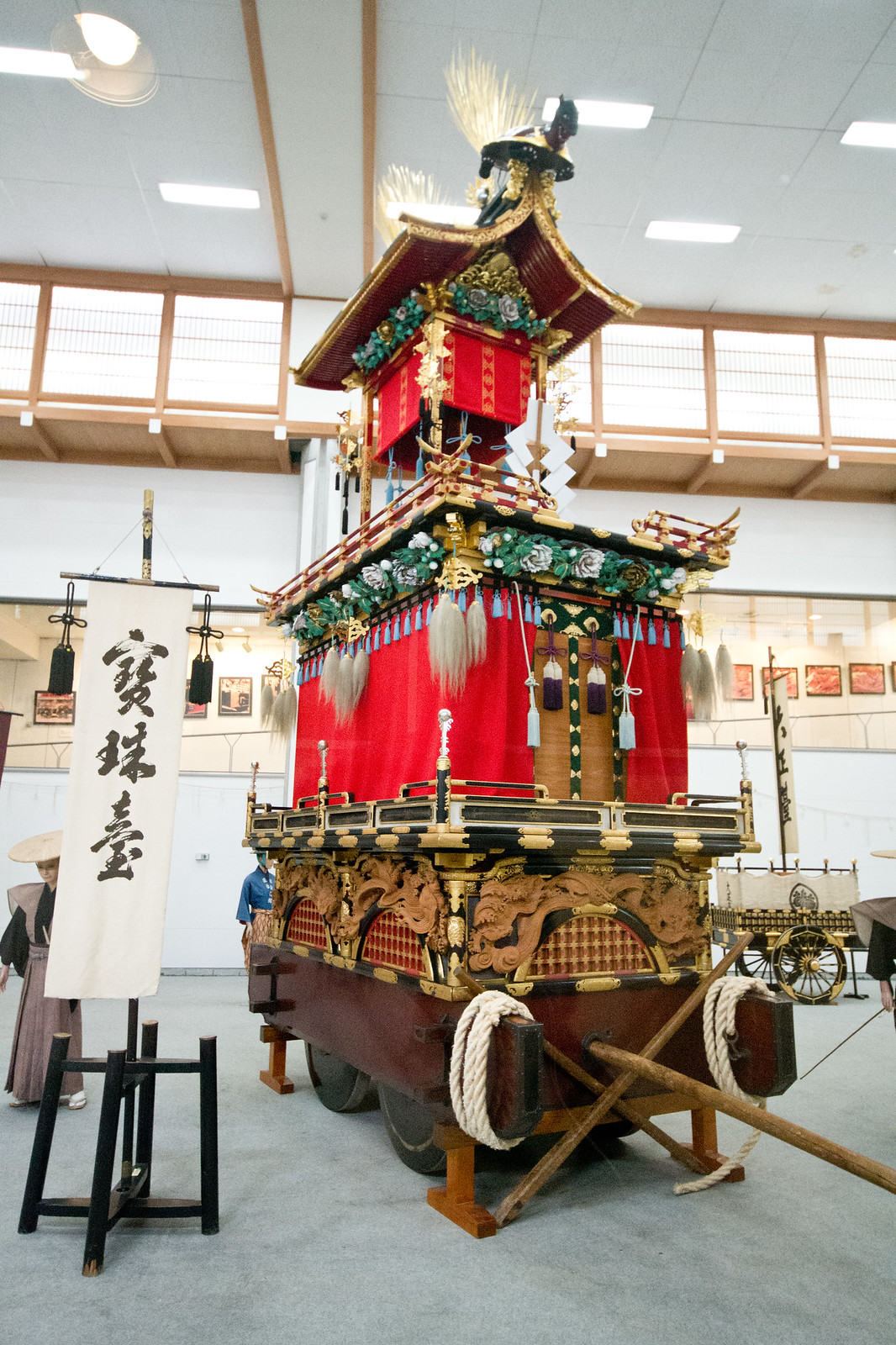 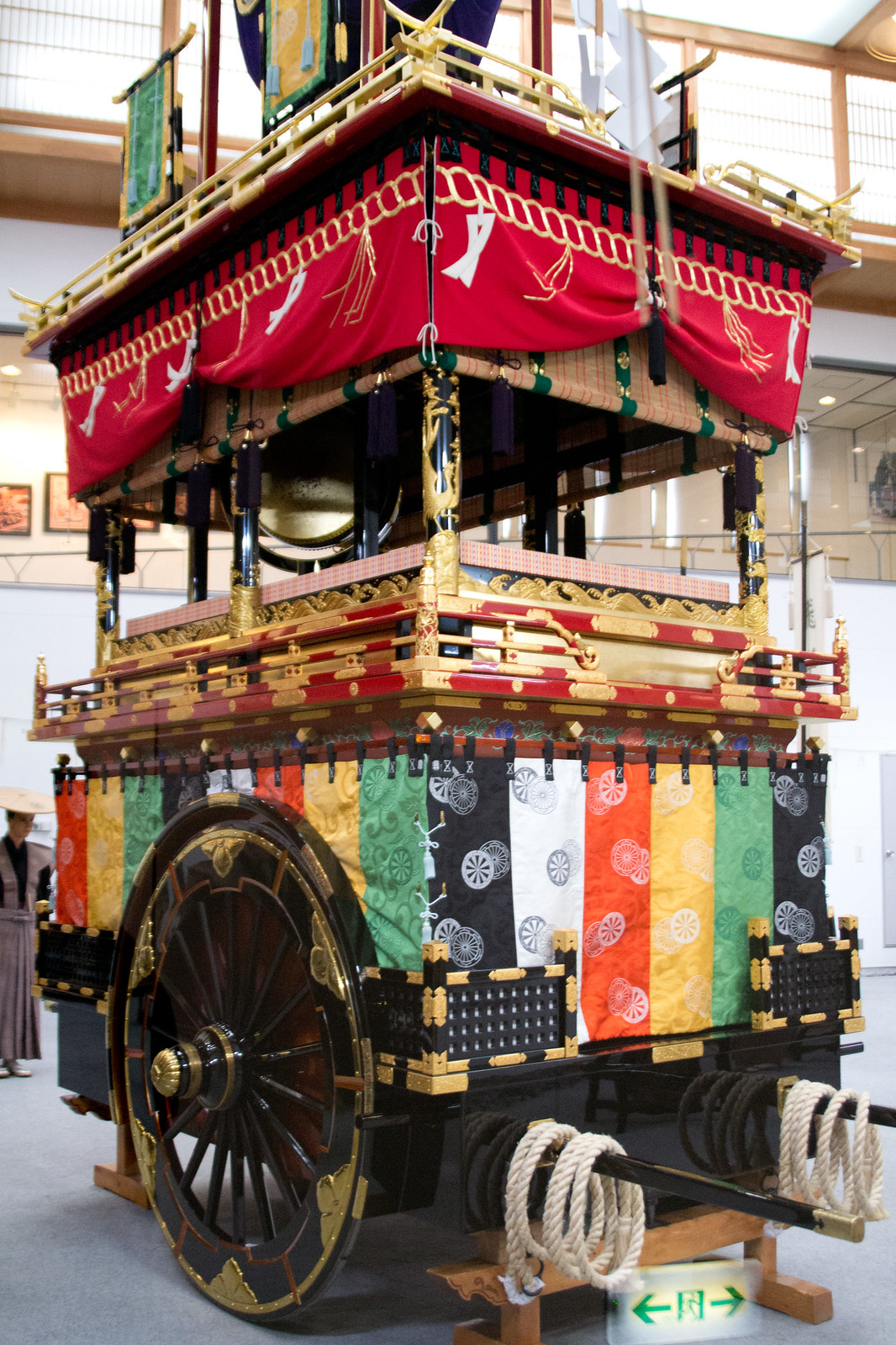 The exhibition hall houses the 11 floats used for the autumn festival. The 4 floats on display are rotated 3 times a year so depending on when in the year you visit, what you see on display will be different. 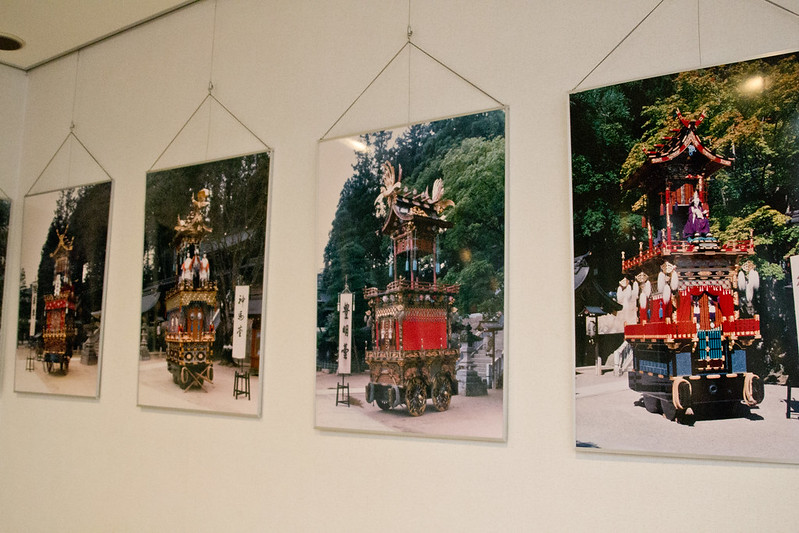 The floats are so beautiful and mesmerizing to look at. It’s clear that each one has its own unique theme and decorations. 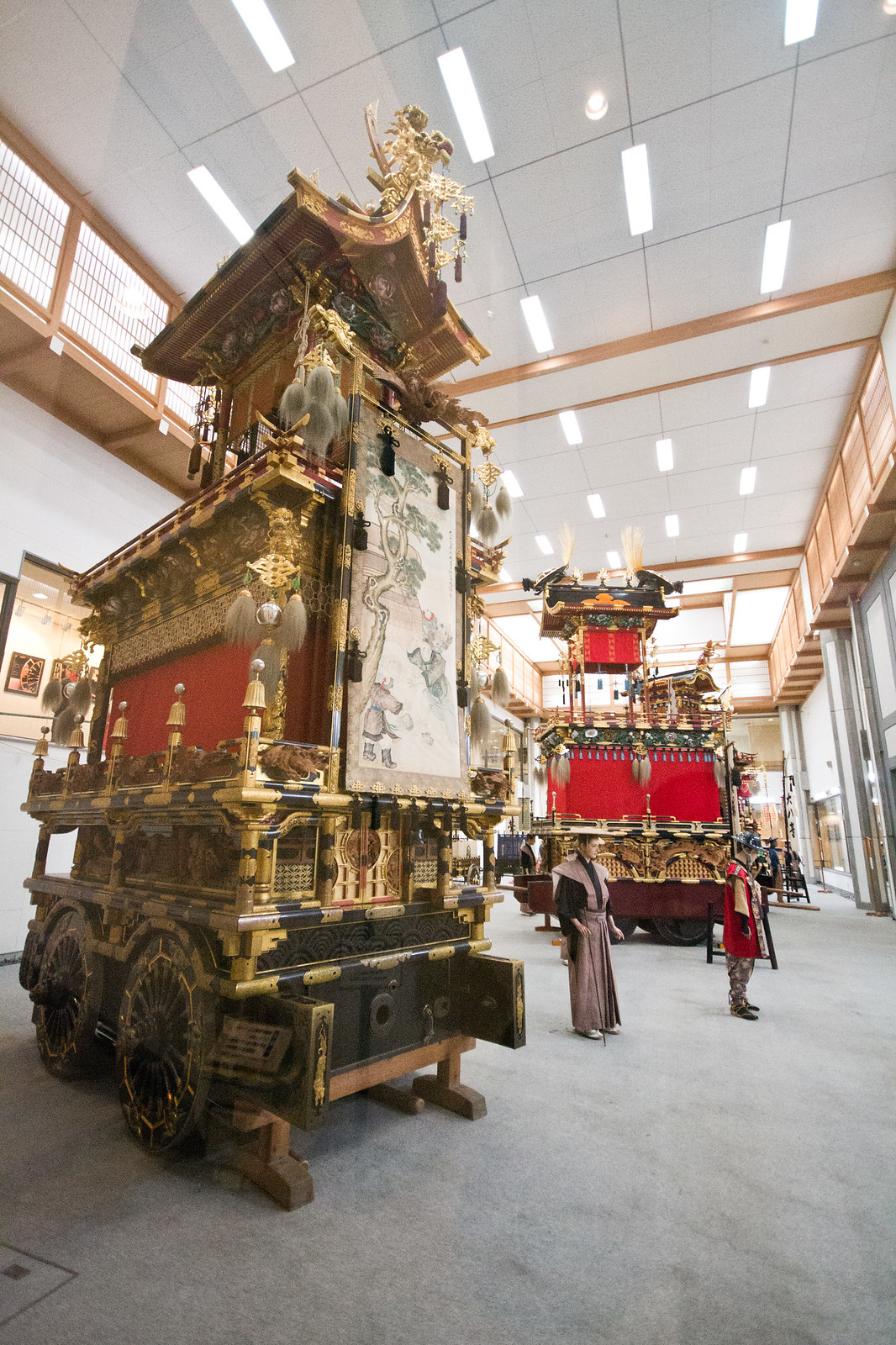 There are English displays throughout the exhibition describing what it is you’re looking at in detail. The exhibition hall also provides a tour guide who can take you through the building and answer questions. On the day of my visit, they didn’t have an English speaking guide available, but they were able to give me a comically large cassette tape audio recording describing each of the floats. The audio guide was essentially just the displays being read out loud though. 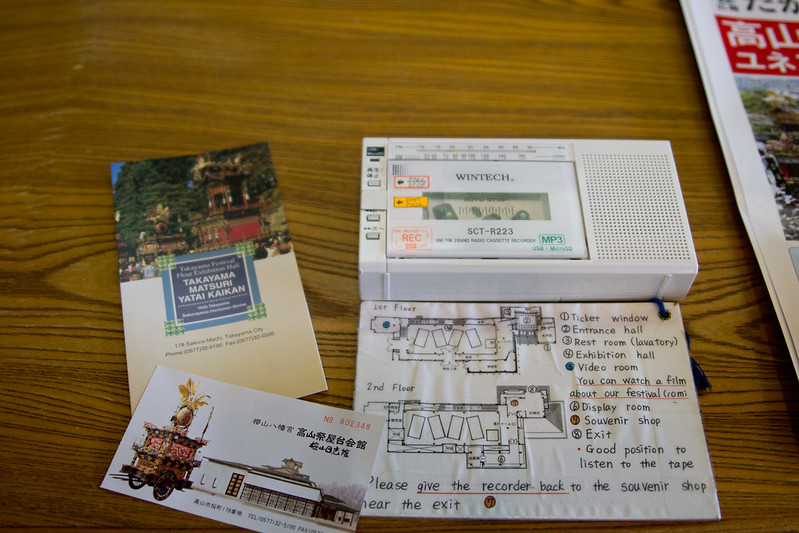 Regardless, you don’t need a tour guide or cassette tape to appreciate the beauty and the sheer size of the floats. 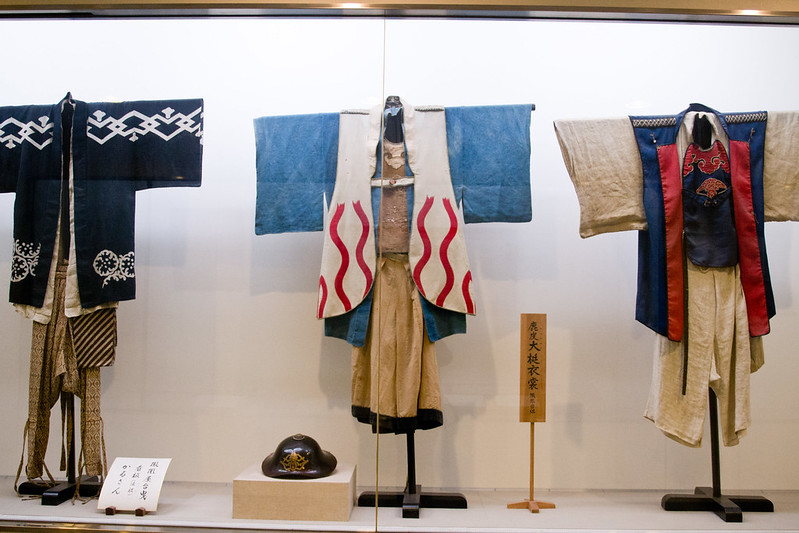 The rest of the exhibit demonstrates how the floats are moved around the city as well as examples of the type of clothing that would be worn during the festival. These displays didn’t have much English and the audio guide, too, had stopped. While it would have been nice to know the specifics, you can sort of figure it out by looking. 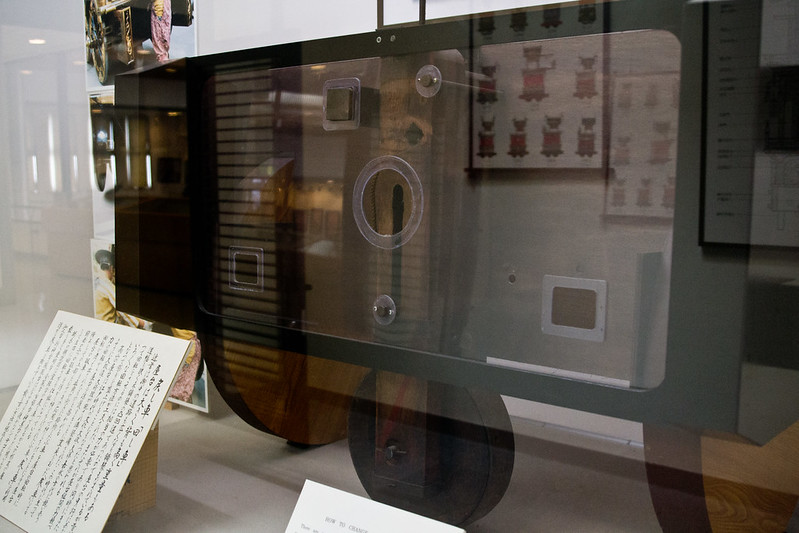 Excuse the reflection in the glass I haven’t figured out how to take a photo with out one!

Admission to the Exhibition Hall also grants you access to the Nikkokan exhibit next door which showcases the city of Nikko at 1/10th scale.If you’re going to be visiting Takayama, I highly recommend visiting the Festival Floats Exhibition Hall. You shouldn’t need more than an hour to see everything and the visit will leave you in awe of the creativity and innovative nature of humanity. The next time I’m in Japan, I’m definitely going to make a point of being in Takayam during this festival and see all the floats in action! 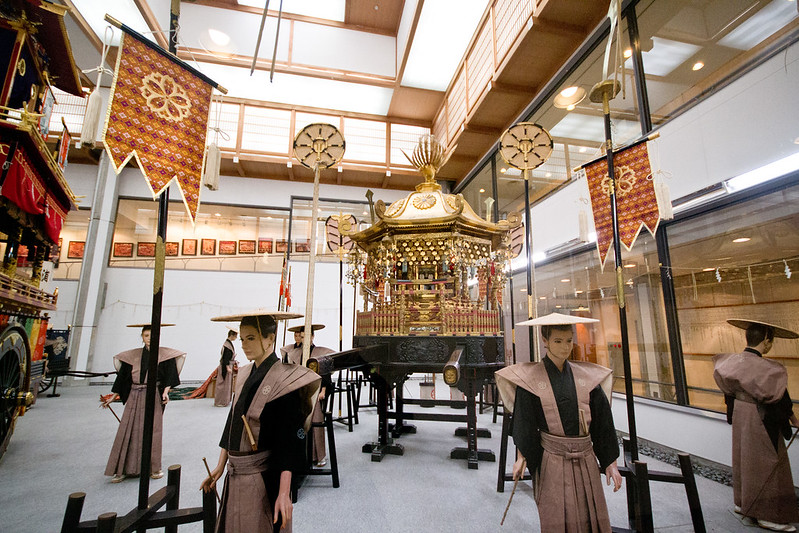 I didn’t notice these when I was wandering around town because I didn’t know they existed until I was doing research for this post. Hidden among the buildings of Takayama, you can spot storehouses that are home to the spring festival floats when they’re not in use. An informational display on the building tells you what float is inside. During the festival, if there is inclement weather, the doors of these store houses are opened to visitors so they can view the floats.

If you’re looking for more information and experiences related to the Takayama Matsuri, there is also the Hida Takayama Festival Forest or Matsuri no Mori (まつりの森) which is located just outside Takayama. The museum features life sized replicas of the floats giving visitors a close-up view of the various designs, decorations and marionettes on each of the floats. Admission is ¥1,000.