You are here: Home / Destinations / Exploring Shibuya Through Its Food
Some posts on this site contain affiliate links, meaning if you book or buy something through one of these links, I may earn a small commission (at no extra cost to you!). You can read my full disclosure policy here.

When you hear of Shibuya in Tokyo, what comes to mind? Perhaps the pedestrian scramble crossing, one of the world’s busiest pedestrian crosswalks? Maybe it’s Hachikō, the famously loyal dog who met his owner at the Shibuya station even after his owner’s death. Or possibly the entertainment options and shopping in the area like the 109 department store.

The famous crossing. What most people think of when they hear Shibuya

But what most people don’t equate Shibuya with is good food. Behind the glitz and bright advertising, there are a ton of hidden places to eat and find delicious bites, if you just know where to look. With the help of Arigato Japan Food Tours, I did just that. We wandered down side streets and alleyways. Learned more about this neighbourhood of Tokyo and dodged tourists and locals. All while eating our way around Japan. 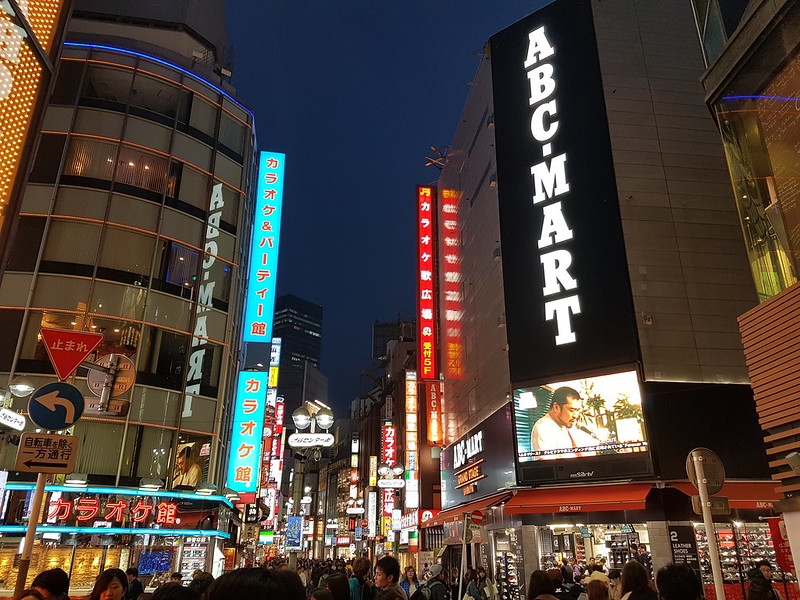 Another common sight in Shibuya: street of shops full of people!

After a fantastic experience on their All-Star tour, I was really excited to see what was in store for this tour. First up was a stand-up sushi place where yen you can enjoy a variety of nigiri at really affordable prices. While some types of fish were more expensive, this is an amazing deal. You can get 2 pieces of nigiri for as little as 162 yen! I’m so sad that I didn’t discover a place like this sooner in my trip because I would have been there every day. 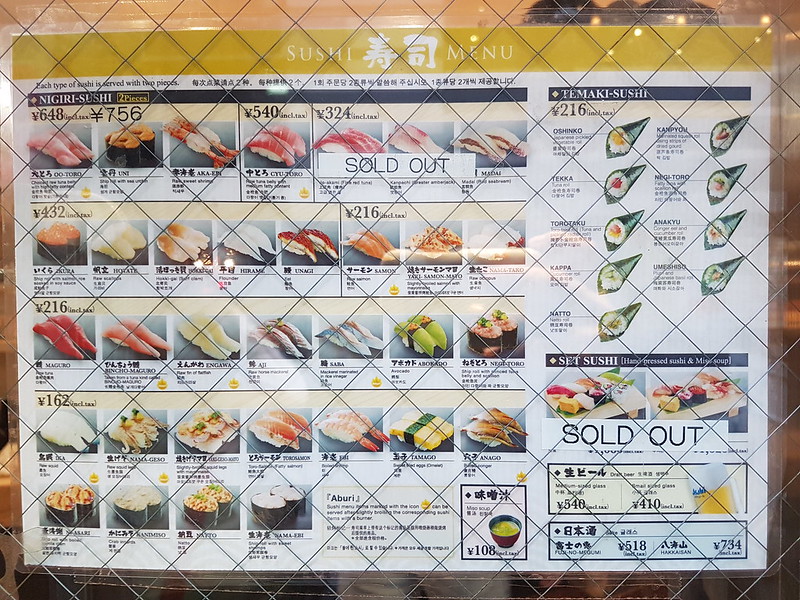 The very tempting menu. Prices are for 2 pieces

When you pick a spot, you’re given a leaf where your sushi would be placed. We were served a piece of tuna, shrimp, tamago (egg), engawa (flounder), aburi salmon and fatty tuna. Aburi sushi is a style of sushi where the fish is charred on top. Typically orders would come with two pieces but for the purpose of the food tour, we split orders so we could have more variety. This was the first time I ever had engawa which is the muscle in a tail fin of flatfish, in this case, flounder. It was cool to try something I otherwise probably would not have ordered. The piece I most enjoyed was the fatty tuna – you really can’t go wrong with this melt in your mouth nigiri.

At your setting, you also have a little pot of green powder which is NOT wasabi but rather green tea powder. There are hot water faucets at the table and you can mix your own tea. The wasabi is already added to the nigiri by the chef as they deem necessary. You can also use grab your own ginger slices which are used as a palate cleanser between pieces of nigiri. 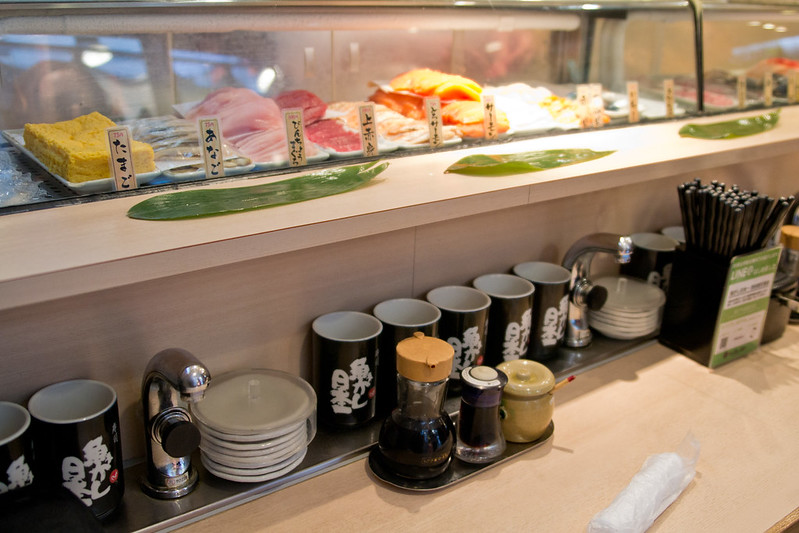 Next, we headed south to the cities of Osaka and Hiroshima to try okonomiyaki which is like a pancake with different ingredients in it. Literally, it translates into “as you like” because you can pick and choose what you would like to be in your own okonomiyaki. What I didn’t know until this trip was that there were two types of okonomiyaki. One originating from Osaka and the other from Hiroshima. While the concept of both are quite similar, how they are cooked are completely different. Now that I’ve had both, it’s easy to tell them apart. 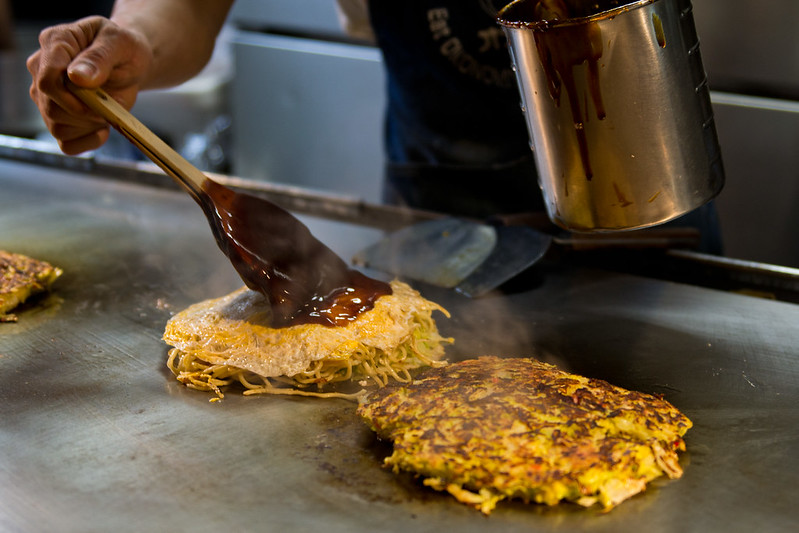 Brushing the okonomiyaki sauce on the Hiroshima version. The other one is the Osaka / Kansai region version.

This family-run restaurant specializes in okonomiyaki and made both types of them fresh in front of us. The main difference between the two is how they’re constructed. Osaka okonomiyaki mixes the batter and the ingredients together before being cooked on the teppan whereas Hiroshima okonomiyaki is constructed layer by layer. 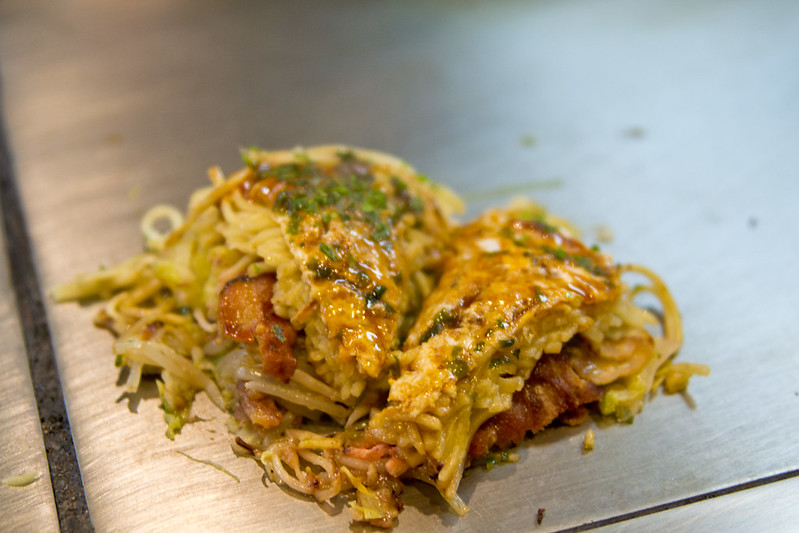 A look at the Hiroshima okonomiyaki. You can see the layers a bit here

We sat at the bar so we could see them expertly construct the okonomiyaki. Between the two, I prefer the Osaka version. It’s what I am most familiar with when you say okonomiyaki. I also liked that I could actually finish eating one. The addition of noodles to the Hiroshima variety made me too full. 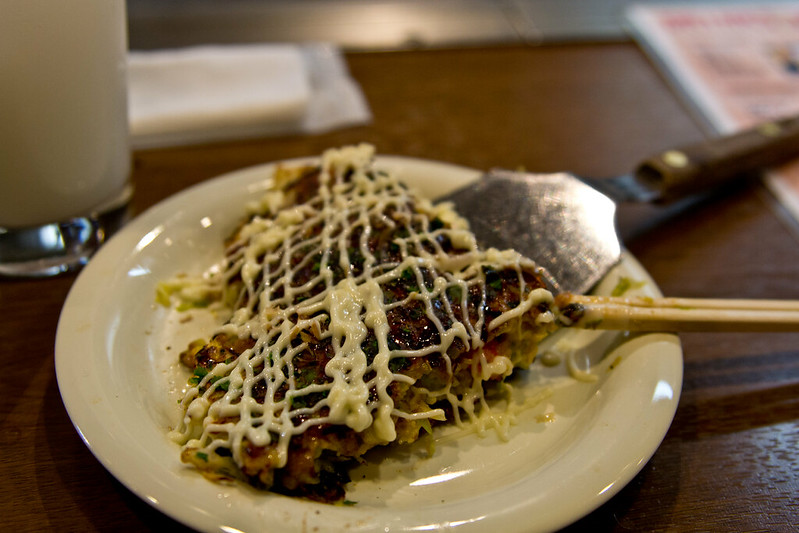 Up close look at the Osaka / Kansai region okonomiyaki

The next stop was for Kobe beef which I was pretty excited about as I hadn’t yet had Kobe beef in Japan. This stand prepared the Kobe simply with just salt and cooked it over charcoal which let the beef just speak for itself. 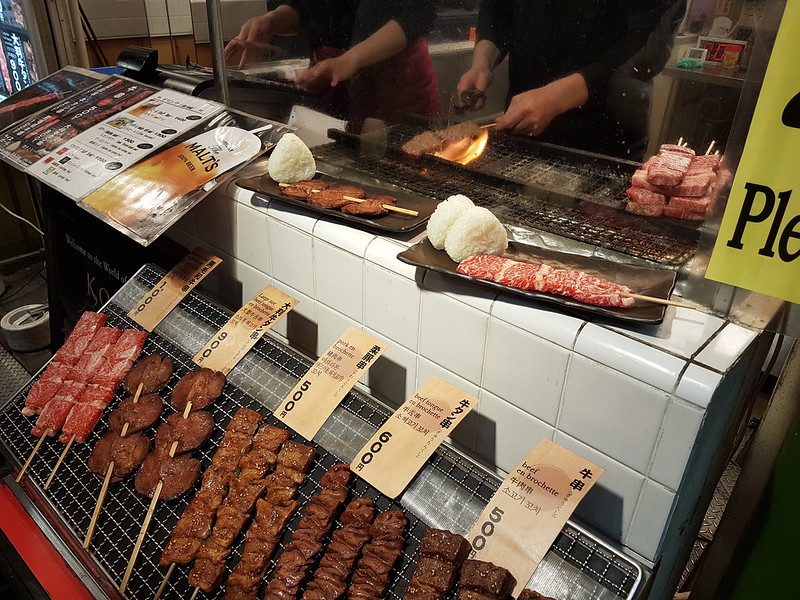 And it definitely did. It was so tender and flavourful. Every bite was just delicious, beefy flavour. 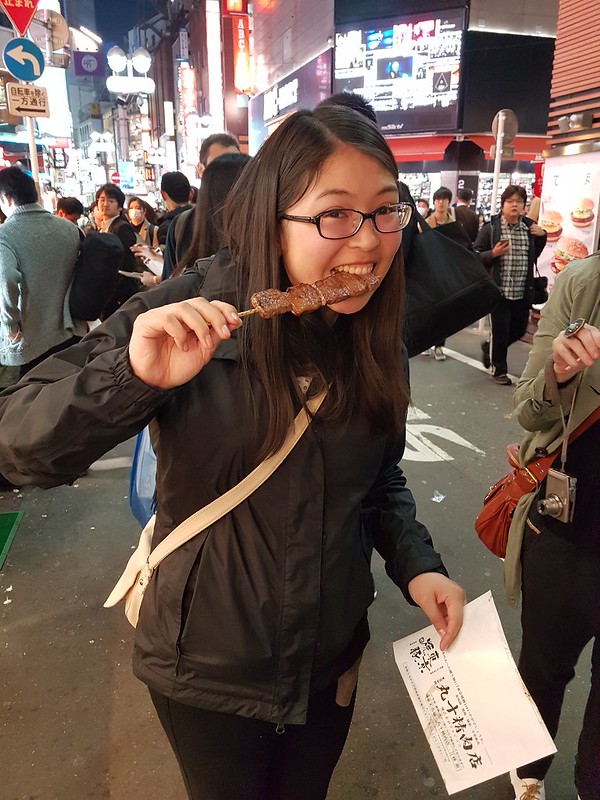 I was a happy camper!

One our way to our next bite, we stopped for a quick wander through Shibuya’s Drunkards Alley or Nonbei Yokocho. The bars here are tiny with only a handful of seats and often you can find them stacked one on top of another. 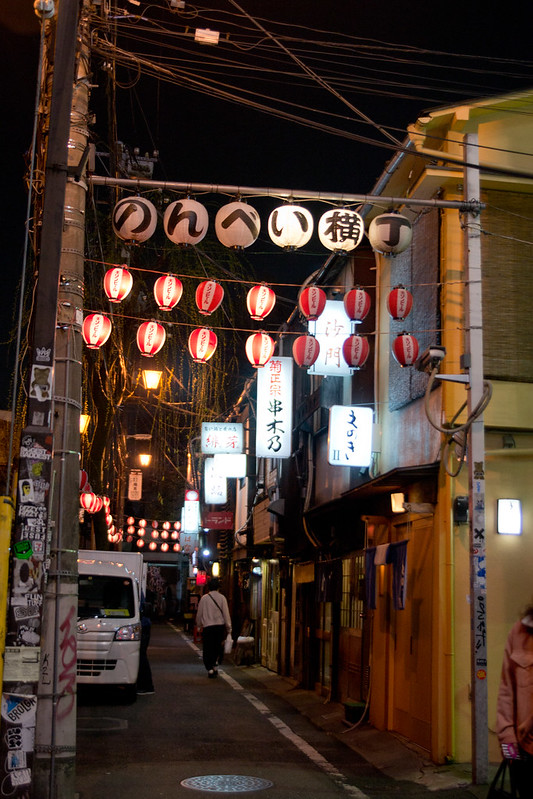 We were there early in the evening so most of them were closed or just getting ready to open. It was still fun to peer into the windows and see the tiny establishments. 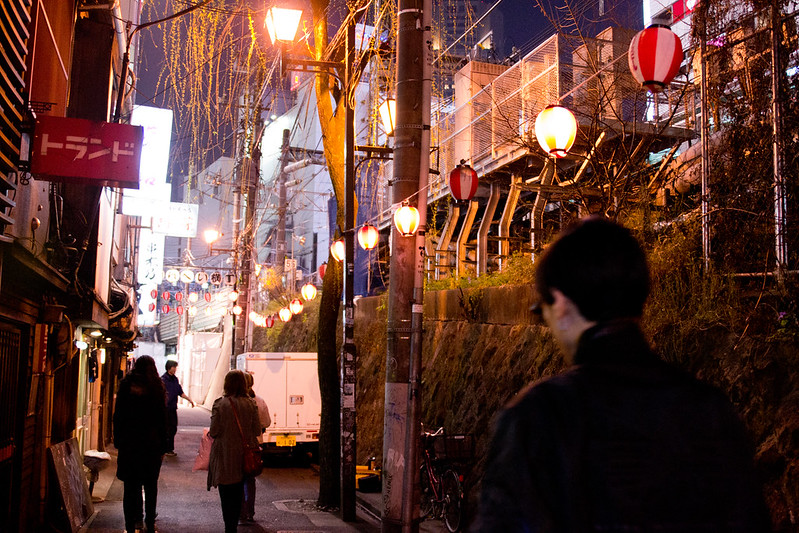 Next up was another Japanese favourite: takoyaki or battered squid balls. I’ve never been a huge fan of takoyaki due to its texture, but I’m always up for trying it again especially at its source. Takoyaki also hails from the Kansai region and I had some the last time I was in Osaka. We visited a takoyaki chain which served up the traditional version that I’m familiar with, but they also had different flavours. We also had one with cheese in it. Seafood and cheese, you’d think it wouldn’t work, but it was surprisingly quite tasty.

You can see the squid piece on the right inside the takoyaki.

Takoyaki is like a round pancake. Batter along with its filling is cooked in a specialized round pan. It is most commonly filled with octopus, but other ingredients are also possible. Once cooked, it’s topped with takoyaki sauce, mayonnaise and then sprinkled with aonori ( a special type of seaweed) and dried bonito flakes.

Our last stop was to head inside a department store to their food level in the basement. Much like a grocery story, you can find all types of speciality items. For dessert, we had one of my favourites: taiyaki. Typically it is filled with red bean (azuki), but since I just had one recently, I opted to try it with custard. 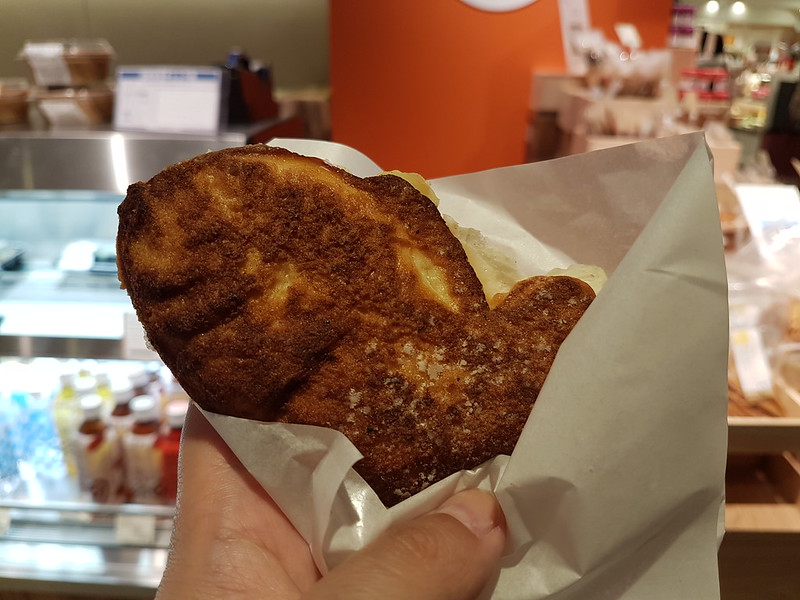 This was the only item I didn’t enjoy, not because of my filling choice. The batter of the taiyaki wasn’t what I was accustomed to and came off as really dry and with a bread-like texture. Not very enjoyable to eat and I ended up eating most of the custard, but leaving the rest. 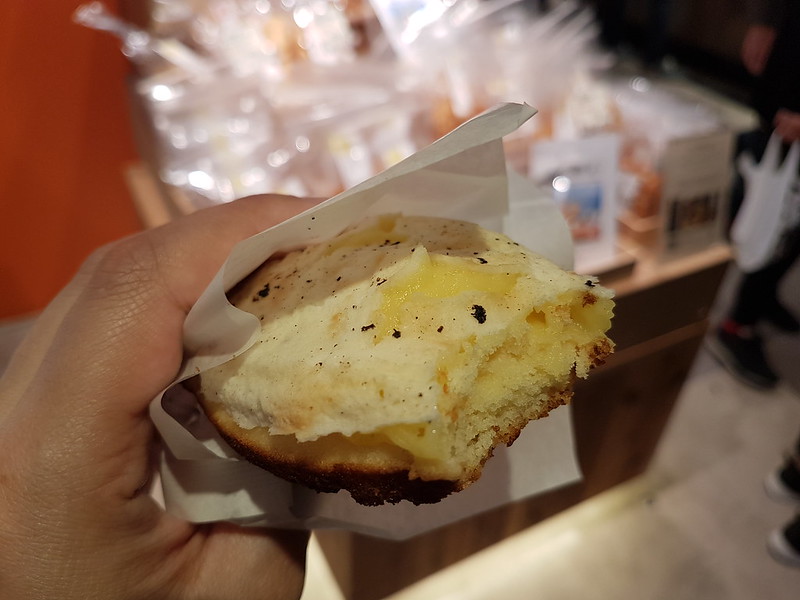 By the end of the tour, I was completely stuffed. Some of the others on the tour decided they wanted to keep on going and headed to the bars of Nonbei Yokocho, but I was exhausted from the month and just wanted to sleep. The tour is definitely a good way of making friends if you’re traveling on your own though. The small group size allowed me to chat with everyone and learn a bit about their story.

Should you go on the Shibuya tour?

I had an enjoyable time eating my way through this neighbourhood and exploring some of the lesser seen parts of this famous area. It was awesome to get context about the area and find out more about the foods we were eating. I enjoyed the variety of food items from restaurants to the street food options and would definitely recommend any visitor to go on the tour on their next visit to Japan.

But what about allergies or special diets?

Be sure to let Arigato Japan know ahead of time and they’re able to adjust to your specifics.

As previously mentioned, I loved the small group atmosphere. With only 6 other people on my tour, I was able to socialize in a comfortable environment. However, depending on your group composition this can vary. On my previous All-Star tour, the group was larger and there were a lot more couples on it. I was the only solo traveler in that group which made it harder to socialize compared to this evening which was with a group of solo travelers.

Happy food explorers and a photo bomber on our #shibuyafoodtour discovering hidden streets, back alleys and delicious experiences #arigatojapanfoodtours link in bio

I was also able to ask all the questions I wanted of my tour guide which really enriched my experience. Even though this tour was coming at the end of my trip, I still learned a ton from her.

I had an enjoyable time on the Shibuya tour and see it being a great introduction to Japanese food. I’d suggest signing up for this tour at the beginning of your time in Tokyo and Japan in general so that you can reap its benefits and knowledge you gain for the rest of your time in Japan. If you are interested in tasting a variety of iconic Japanese foods all in one tour, I’d definitely suggest going on the Shibuya tour with Arigato Food Tours. If you’re looking for something a little different and more unconventional, head on the All-Star tour. Either way, you’re in for a delicious time!

P.S. 7 Free Things To Do in Tokyo & Must Have Dining Experiences in Japan

Disclosure: I was a guest of Arigato Japan Food Tours on the Shibuya tour. As always, all opinions and observations are my own.