You are here: Home / Destinations / Europe / The Start of a Spanish Obsession – 6 Reasons Why I Adored Spain
Some posts on this site contain affiliate links, meaning if you book or buy something through one of these links, I may earn a small commission (at no extra cost to you!). You can read my full disclosure policy here.

I didn’t think I would love Spain as much as I did. I’m not completely sure what it is that calls to me. Maybe it’s finally being back in Europe after a long time away. Maybe it has something to do with the sun and slightly warmer weather. Maybe it was the food or my company. Regardless, when it came time for me to leave, I really didn’t want to go. Spain has definitely captivated me.

The first thing I saw: Plaza Mayor in Madrid

This trip was a long time coming. I had a trip planned for the end of 2012 – kind of like one last hurrah before moving home from my time living abroad. However, I managed to find a job at the last minute and wasn’t able to go. So I put it on hold for a couple of years until last month when I went to Madrid, Seville and Cordoba. 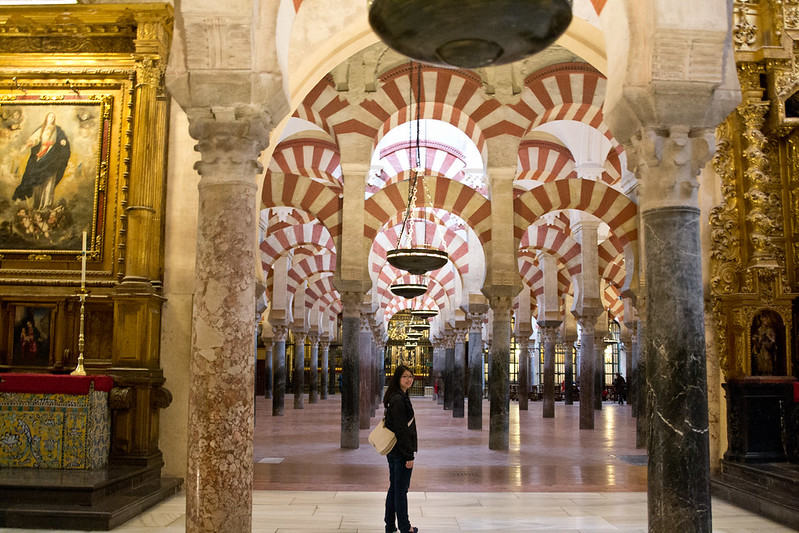 Inside the Mezquita-Catedral in Cordoba. Gorgeous!

I was a bit apprehensive about going to Spain. I have one really good friend in Madrid that I met in Budapest that I knew I could count on. Otherwise, my Spanish is non-existent. I knew virtually nothing about the country or culture beyond paella and tapas. However, not knowing has never stopped me before and usually when I have no expectations, the trip turns out amazing. And in this case, it really was. Here’s why I adored it and why you should go to Spain too! 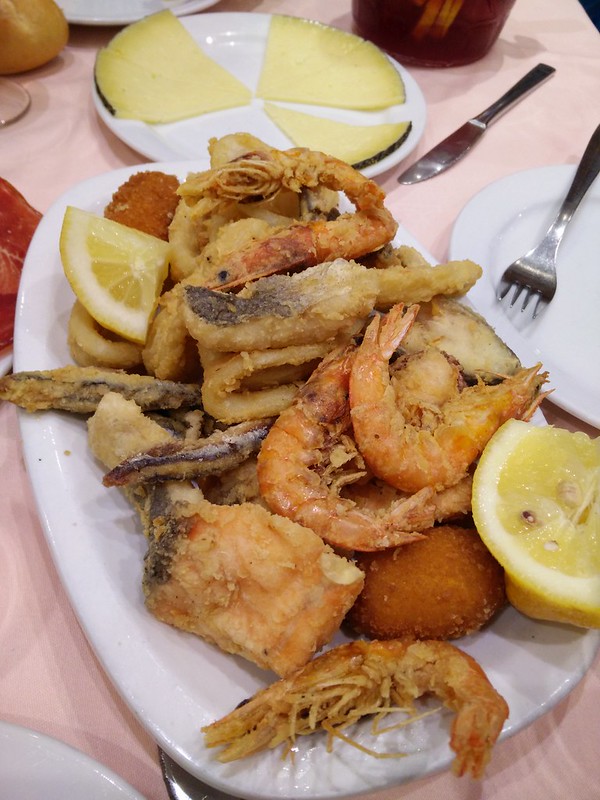 Yum! So much variety

We boast about our seafood on the west coast of Canada. Of our fresh salmon, oysters on the half shell, and fantastic Dungeness crab, but I wasn’t prepared for the great seafood in Spain. Even in Madrid which is right in the centre of the country had a great selection available brought it daily from the coast. 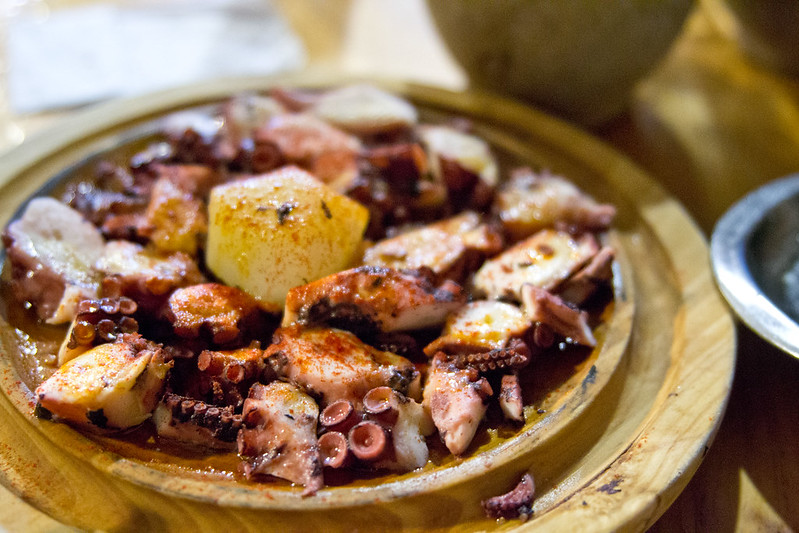 Galician style octopus at a restaurant in Madrid.

Squid that isn’t chewy at all. Plump juicy clams. Crispy calamari. Melt in your mouth salmon. Deep fried. Grilled. Pan seared. Regardless of the cooking method, everything was good and so flavourful.

Actually, all the food was great 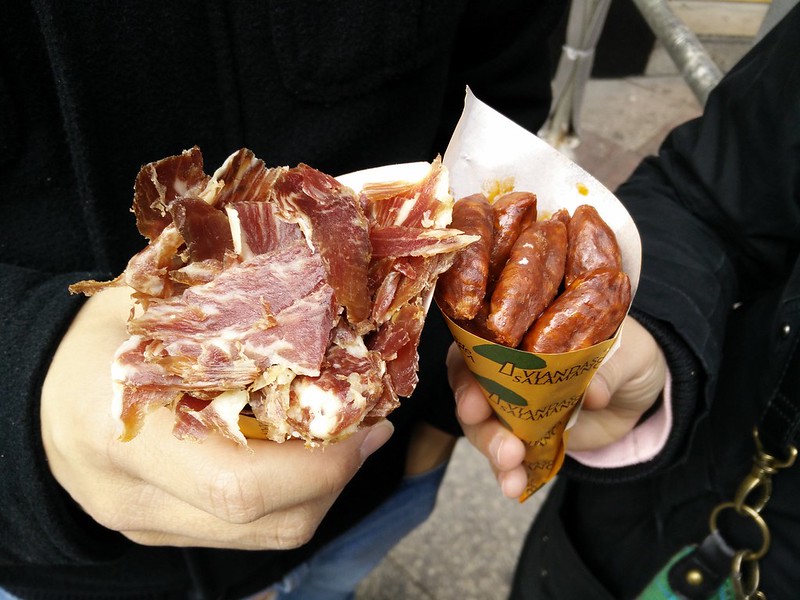 Can’t say no to a meat cone or two!

Beyond the seafood, most of everything I ate was fantastic. The jamón was delicious and so affordable compared to home. We tried to get as much of it as possible. We went out for tapas for almost every day ordering a variety of items. From dishes I was already familiar with like patatas bravas to Spanish omelettes to others that I just ordered because it sounded tasty or exotic, I didn’t have anything I didn’t like. 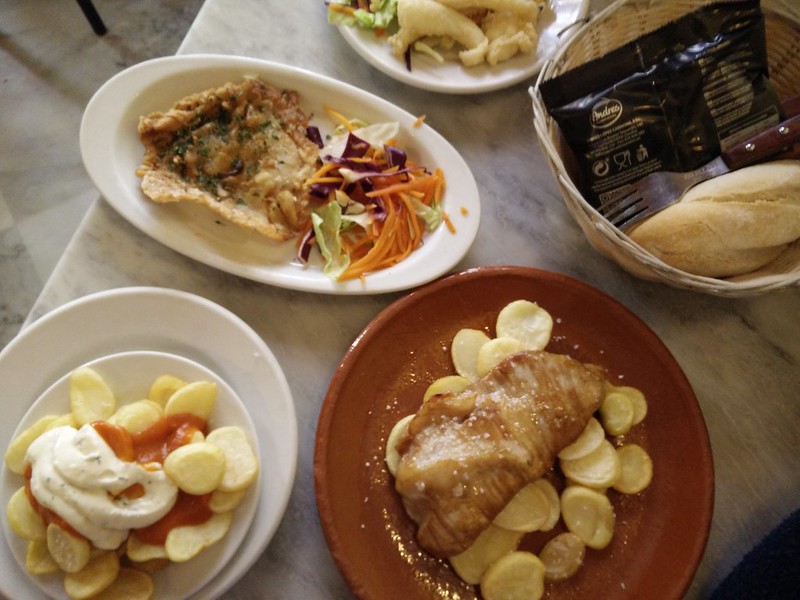 A selection of tapas we enjoyed in Seville

While I did find a couple dishes to be really oily and greasy, you really can’t say no to fried food right? Well, I can’t. I do wish we had a little more in the vegetable department, though. We combatted this with grocery store salad lunches at the hostel every couple of days.

The people are incredibly nice

I went on this trip with my boyfriend, C. Our first trip abroad and longest time spent together consecutively. If that doesn’t test a relationship, then I don’t know what will. One thing I learned about him on this trip was his uncanny ability to make friends with anyone regardless of language. I definitely err on the quieter side of the spectrum and it takes me a little while to warm up to people. But not C and it’s great because the people we met were all incredibly friendly. We went to a number of restaurants where no one spoke English, but the wait staff were patient and kind – a vastly different experience from other experiences in Europe!

We made time to take silly selfies too. Super important.

Sure it was easier when others spoke a little bit of English, but when we were delayed on our flight back home (due to an air traffic controller strike in France), he managed to make friends with the Spanish family sitting next to us. Aside from their nine-year-old daughter who spoke some English (but was too shy to use it), we somehow managed to have a broken conversation with them. Lots of gestures and smiles all around much to the amusement of everyone surrounding us on the plane. 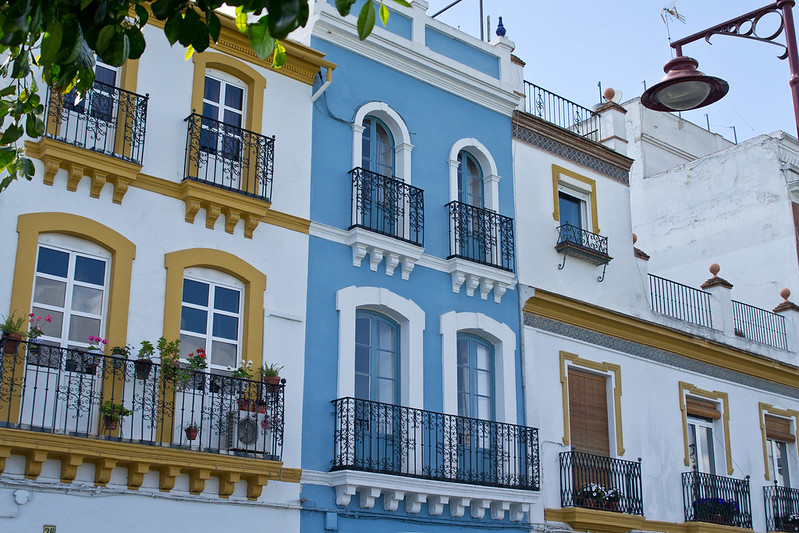 I have always loved Europe for its beautiful architecture and stunning buildings. Spain definitely had these majestic and grand buildings, but what they had even more of was colour. I loved the vibrancy through the cities, especially in the south. Brightly coloured buildings with hues of red and orange others white with colourful accents and embellishments. 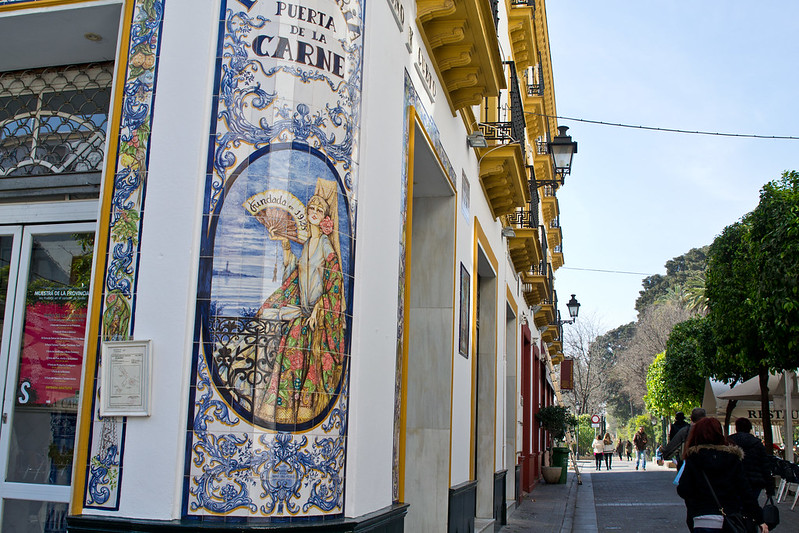 Such a pretty mural

Vivid and intricate murals decorated the exterior some advertising the services inside or a nearby place name. Others decorated for purely aesthetic reasons. The colours gave such life to the city.

Gorgeous! A sunny day in Seville

It’s hard to go to Spain and not mention the sun and I think it definitely contributed to my current love affair with Spain. Of the nine days we were there, the sun was out and shining for all of them. Madrid was surprisingly chilly (but still warmer than Vancouver!), but once in Seville, it was much warmer. Coming from the dark, gloomy and rainy Vancouver, this was heaven.

It would be hard to write an article about why I liked Spain if I didn’t mention money. For a European holiday, Spain was surprisingly really affordable. Especially now with the Canadian dollar so low, Spain was a really good choice! Our biggest expenses were trains (which we opted to do over buses as we didn’t have much time) and hostels. We averaged about 24 euros a night in a mixture of dorm and private rooms. Meals, in general, were inexpensive. The selection of tapas in the photo above (4 tapas and a coke) cost us 10 euros and we were both stuffed afterwards.

I managed to do the utmost stupid of stupid. I left the majority of my Euros on my desk. At home. Far far away. #travelfail

In a major travel fail, I accidentally left the majority of my money on my desk at home. I had my moment of realization on the first leg of my flight. Talk about highly embarrassing. I had about 150 euros on me, but C had his half of the euros we had exchanged. In reality, we didn’t even need those extra euros because we still had some leftover when we came back. It was a pleasant surprise to be able to do everything we wanted to do and do it in an affordable way. 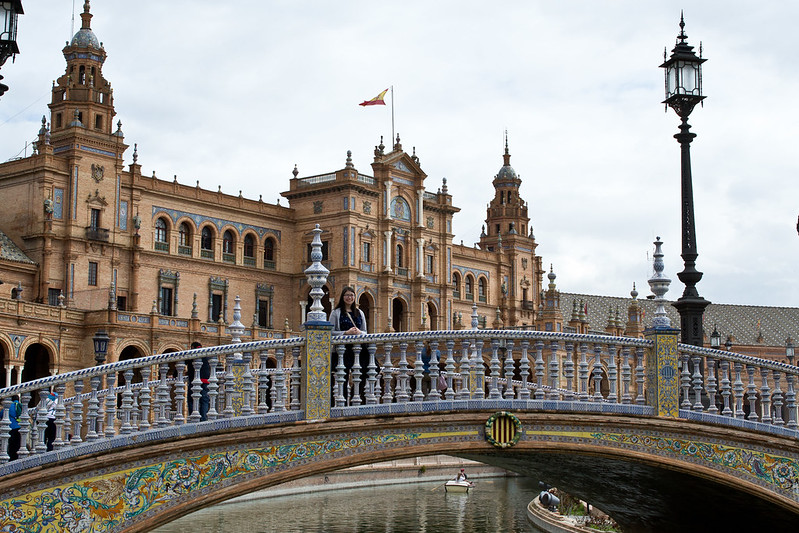 At Plaza España in Seville

In the nine days, I was in the country, I already knew I had to come back. There is so much more to see and explore. Each region is so different. Next time I’d like to head north to the Barcelona area or perhaps over to Galicia and walk the Camino de Santiago or maybe I’ll head back south to further explore Andalusia and see Granada. So much possibility! If you get a chance to go to Spain, then definitely do it!

Have you ever had an unexpected affinity for a place you visited? Have you been to Spain? Did you like it as much as I did?