You are here: Home / Living Abroad / Unintentional Brushes with the Law (or What Not To Do When Using Transit in a Foreign Country)
Some posts on this site contain affiliate links, meaning if you book or buy something through one of these links, I may earn a small commission (at no extra cost to you!). You can read my full disclosure policy here.

The other day I was riding the Vancouver Skytrain (our subway equivalent but above ground) when my mind drifted off to thoughts about transit police. See, Vancouver’s system doesn’t have any barriers to entry. It’s run on a very Canadian honour system which clearly doesn’t work because the system is constantly not making enough money and there are so many abusers of the system who ride free.

At the entrances and exits of random Skytrain stations and some times on the train, transit police will come and check for valid tickets, but generally there aren’t that many. For some reason, even though I’ve done nothing wrong, I’m always neurotic and on the look out for them.

Perhaps it stems from my few not so pleasant encounters with similar police in foreign countries. These kinds of encounters are made so much worse due to the language barrier and in some cases complete ignorance on my part.

I definitely don’t condone what I did in the past and highly recommend you don’t do what I did back then. Regardless, they all make good, if somewhat foolish, stories.

When I went to Prague, it was probably a stupid idea. I was so broke from moving abroad recently, I was still learning how much the Forint, the currency in Hungary, was worth and I just didn’t have much disposable income as when living in Canada. So going to Prague was a very silly idea.

But it sure is pretty!

On the last day of my short trip I only had a handful of Kroner left. Enough for a bus ticket and a meal except I needed 2 bus tickets. So on the first part of my journey, I went without one. All was good until the second to last stop when two controllers stepped on.

I produced my unvalidated bus ticket knowing full well that we were going to get fined. I had read about this online. I had heard about this from friends. We were poorly positioned or I would have just validated my ticket and be done with it, but the controller stood between me and the punch. I was doomed.

After some serious pleading on our part, we walked away 70 euros lighter each. Well, really my friend walked away 140 euros lighter. I literally had no money on me so thank goodness he did. Not the best way to end a weekend getaway.

Living in Budapest I was always careful to have a validated month pass on me at all times when taking transit. I rarely got checked on the tram, but to enter the Metro there is almost always an inspector. Because I had a student ticket, I had to make sure I had my student card as well so I kept them together in a plastic sleeve. There are particular routes that it is common to get checked – usually in tourist areas.

One day a group of us were heading to the Central Market which enters this danger zone. On the tram, my friend turned to me in sudden realization that her month pass had expired the day before. And joked that it would be bad if the controllers came then. Of course, as luck would have it, they did.

Under the right circumstances, the Budapest trams are really atmospheric!

I don’t know what I was thinking, but in a moment of sheer stupidity, after I had showed the inspector mine, I turned around and gave it to my friend. Of course that turned out as expected with the controllers calling us out on it, making us get off at the next stop (our destination anyways), and taking away my pass.

In Budapest there is a law that the transit police cannot take what belongs to you (at the time I didn’t know this). Only the police can do that. So as soon as the controller took my pass which also contained my student card, my friend started making a huge fuss, yelling at the guy, demanding the pass back. The stop was right in front of a university and in a tourist area so there were plenty of people in the area who spoke English and understood enough to take stock of the situation. Police, and transit police especially, are generally seen in an unfavorable light by most Hungarians so it wasn’t long before they started yelling at them too in our defense.

The scene of the crime. You can see the tram stop in front and that’s the Central Market in the back.

Eventually one guy was able to get the pass back from them. He told us that we were wrong to try and pass off my pass as my friend’s pass, but that they were equally as wrong for holding us back and for taking away what belonged to me. While the controllers had threatened to call the police, that guy threatened the same. I don’t know exactly how he managed to get me back my pass exactly as the exchange was in Hungarian and I barely understood how to count to 3 at that time.

This encounter was stupid through and through. I had a knee jerk reaction and wanted to come to the aid of my friend. What’s even more stupid is that my friend, had she gotten a fine, could have gotten out of it by presenting her pass for the previous month. Usually they’re lenient about it if it’s only a day out of date. Even if the controller had taken my pass, I could have just walked away from the situation. The transit police had no control over making me stay at the scene. In the end, a good Samaritan came to our aid and with a bit of luck I walked away fine free.

This encounter was through no fault of our own. My friend and I were rushing to make the start of a tour across town in time. We had originally intended to walk the distance but we dawdled too long in one location and needed to make up ground fast. We found a bus route that would get us where we needed to be. 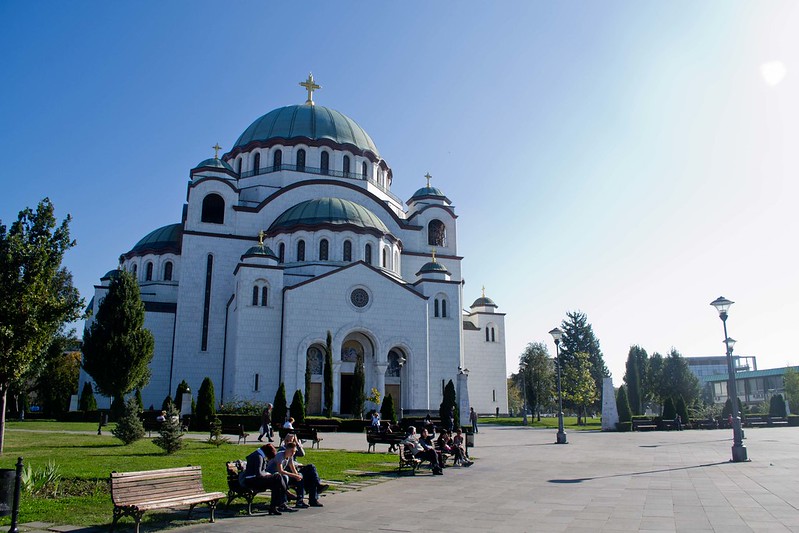 We spent too long wandering around in this church – the Cathedral of Saint Sava.

The only problem was how were we suppose to pay for our fare? We didn’t even know how much. Luckily we found a male group of what looked like to be university students who took pity on us in our confused state. We inquired about where we could buy a bus ticket. Nowhere nearby. We asked if we could buy one on the bus. Again no. They told us to just get on and that there were rarely any inspectors.

We were okay for most of the ride. It wasn’t until we were getting close to our destination that we spotted them. Smartly dressed men in blue uniforms converging on the bus. Thankfully the bus was very crowded and we were in the middle of the bus away from the doors. We used this to our advantage and managed to squeeze ourselves among the people who had been checked by one inspector. Luck was on our side and the next stop wasn’t that far away. My friend and I made a break for it and managed to get off the bus unscathed. Needless to say my heart was pounding away in fear of getting caught. That would have resulted in a fine of 2000 Serbian Dinars (approx. $18 USD at the time of writing), which in the big scheme of things isn’t a lot, but encounters like these are no fun. 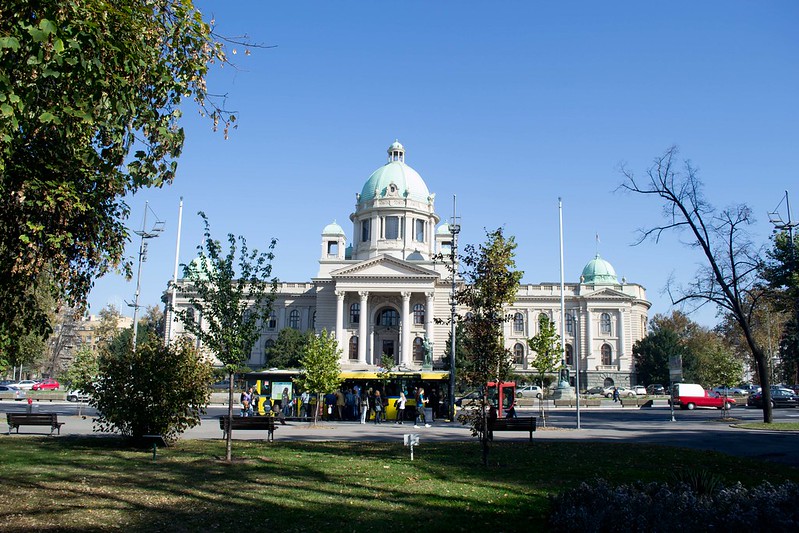 A bus stopped in front of the Parliament building in Belgrade after our daring escape.

Upon searching later, we found out the group of guys really weren’t completely lying to us. All of Belgrade uses a fancy electronic system of cards that need to be validated for each trip. Convenient if you’re a local. Confusing if you’re visiting. You are able to buy paper tickets on the bus though so I really wish we had just attempted to get a ticket from the driver.

So there you have it, three cities, three encounters with the transit police. I’m not proud of these occurrences so clearly do as I say and not as I do and make sure you buy and validate your transit ticket before you take public transit abroad!

Have you ever tried to get away with not paying for transit before while traveling? Did you have any close calls?