You are here: Home / Destinations / North America / Canada / British Columbia / Memorable Provincial Parks in British Columbia
Some posts on this site contain affiliate links, meaning if you book or buy something through one of these links, I may earn a small commission (at no extra cost to you!). You can read my full disclosure policy here.

April 22, 2014 was Earth Day and in honour of that, I’ve been showcasing photos of National and Provincial Parks of British Columbia and Canada on my Facebook page. In a happy coincidence, I also found out it was National Parks Week in the US.

While seeking photos of Provincial and National Parks I realized that despite traveling through most of the country, I haven’t been to many parks outside of BC. I’ve visited a lot of parks in British Columbia, mostly through random hiking adventures and the occasional camping experience.

Here is a collection of some of the most memorable parks I’ve visited in British Columbia. Some of these I featured on my Facebook page this past week, plus I’ve added a few more favourite parks from this beautiful province that I get to call home. 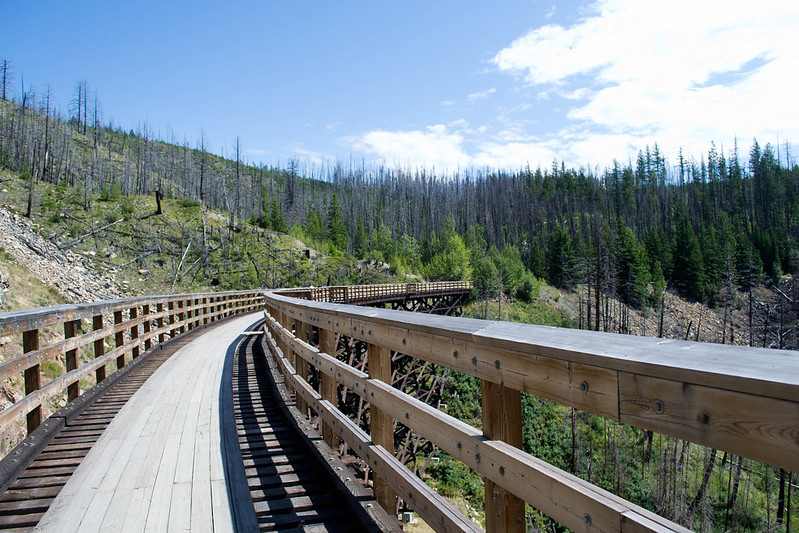 Last summer while in the Okanagan I explored the Myra Canyon Trestle Bridges which is a part of the Myra-Bellevue Provincial Park. I really enjoyed exploring all the trestle bridges and seeing what can happen when a community comes together when disaster strikes. The park itself is very large and the canyon is only a small portion of the park. There are a number of other trails that you can hike and the park is open for horses and horseback riding as well.

I’ve gone camping a number of time at Manning Park. Located a 3 hours drive from Vancouver, there is plenty to do in this park. There are many camping areas, but be warned, the ones along Lightning Lake go the fastest. If full fledged camping isn’t your thing, there are also cabins (and a whole resort complex) that you can book. These go even faster so book early.

The water is so clear

There is plenty to do in the park from hiking to hanging out by the lake. There is also the option to rent boats, kayaks and canoes. Fishing is also possible within the park’s rivers and lakes. You can take a drive up to Cascade Lookout and get a beautiful view of the whole park. While I’ve only gone in the summer, the park also has a mini ski hill which you can enjoy in the winter. It looks like it would be a good place for a beginner to pick up a winter sport.

MacMillan Provincial Park is one of my favorite provincial parks simply because you can visit Cathedral Grove and hug a tree. 800 year old Douglas fir trees tower above with the biggest reaching 75 m (250 ft) tall and 9 m (29 ft) wide. That’s a massive tree! You feel so small up against it. 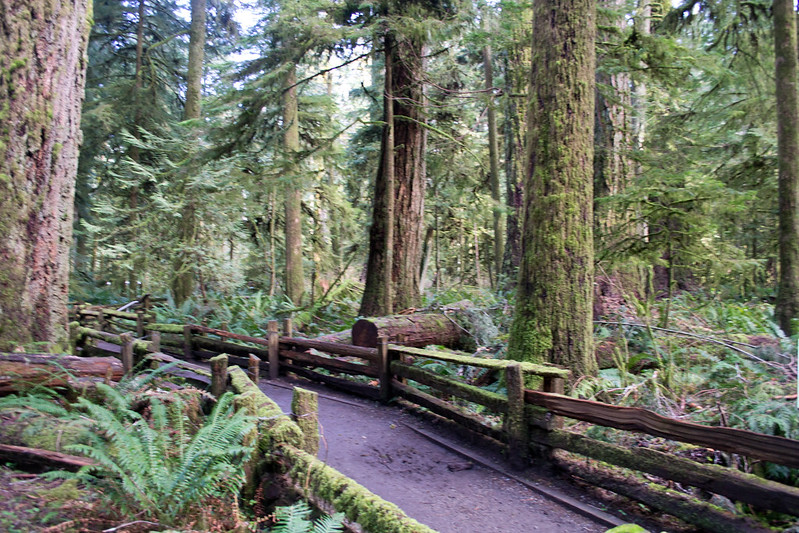 Located on Vancouver Island, Cathedral Grove is a must visit, especially if you’re en route to Tofino or Ucluelet on the west side of the island. The highway runs right through the middle of the park so you can’t miss it. The south side is where you will find the biggest tree and to the north you can wander through ancient Western red cedars. The paths are wide and easy to walk, making it accommodating for all. Even if the weather is crappy like it was during my visit, it’s still so gorgeous. 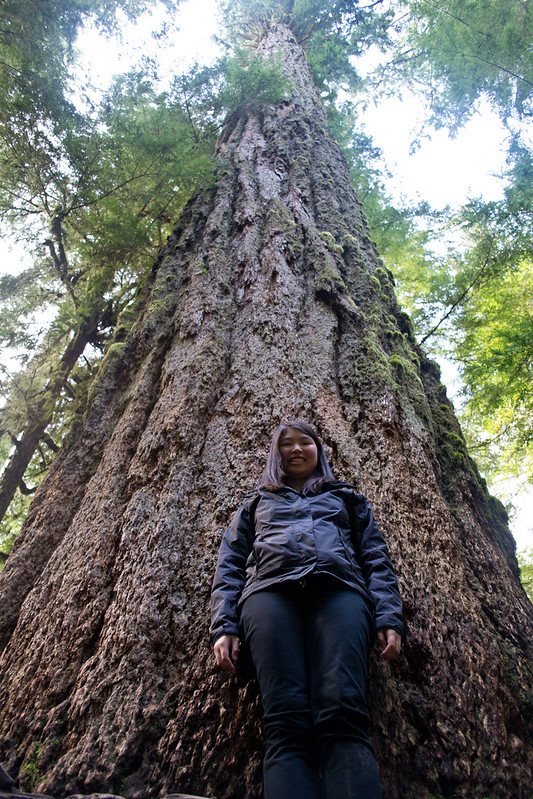 I feel so small!

Before you enter the park, make sure you stop off at the Coombs General Store and grab some ice cream. You’ll know you’re there when you spot the goats on the roof.

The view looking down to Long Beach from Radar Hill, a war memorial site.

The Pacific Rim National Park runs along the left coast of Vancouver Island. Known for its beautiful coast lines and rainforests, the park is split up into three areas: Long Beach, the Broken Group islands and the West Coast Trail. I’ve only visited the Long Beach portion of the park which is located a short drive away from Tofino and Ucluelet. 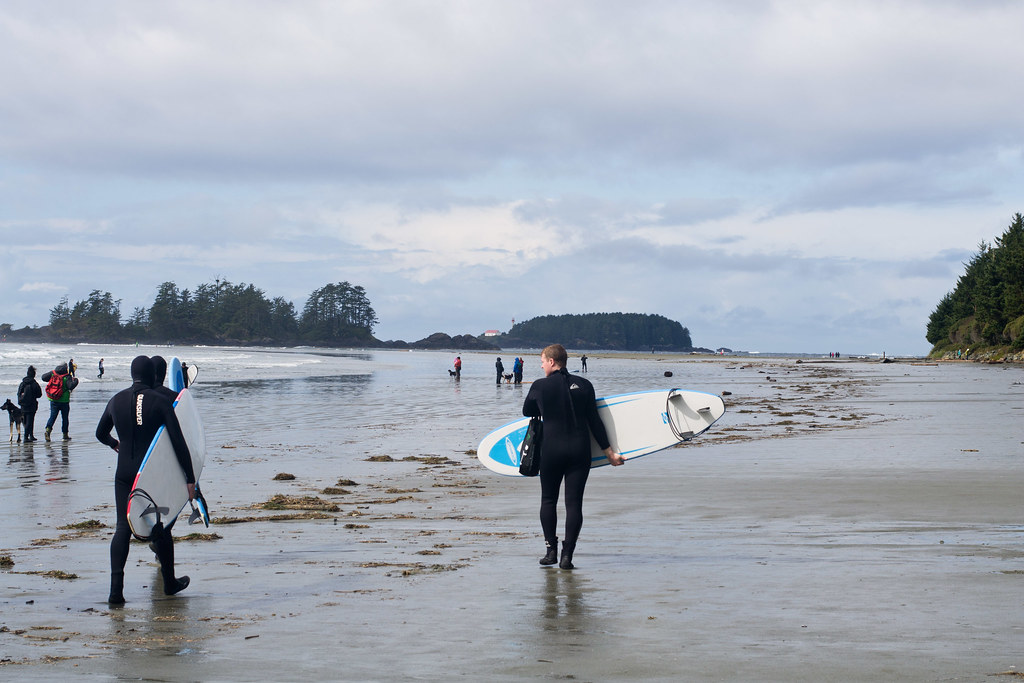 The beaches in this area are long with waves coming in from the open Pacific Ocean making it a mecca for surfing enthusiasts. Even if you’re just learning, there are plenty of businesses in the area who offer lessons. I visited during a grey and wet April and opted to stay out of the water, but I’ll have to go back one day and try my hand at some surfing! 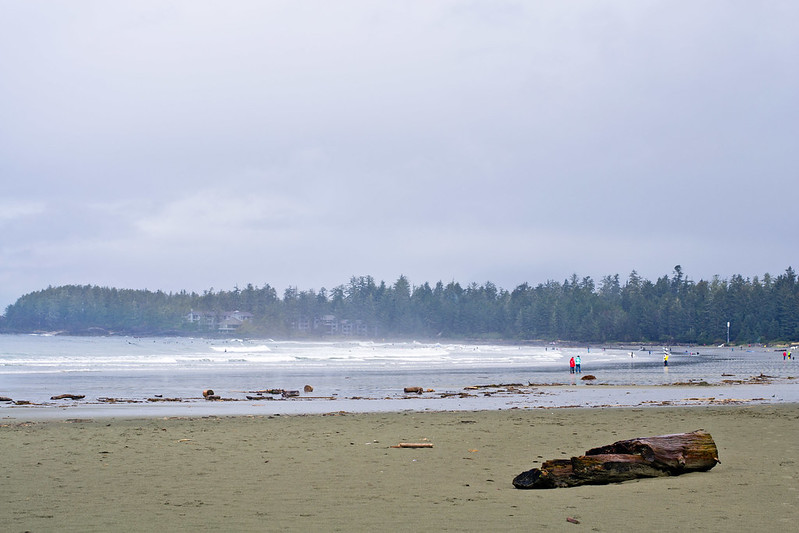 Beyond the beach, there are lots of trails and hikes available. The park provides interpretive programs as well which introduces you to the flora and fauna in the area and explore some of the park’s history. There are options to camp directly in the park, or you can stay in nearby Tofino or Ucluelet.

Looks so eerie doesn’t it?

For more about the Pacific Rim National Park, check out the posts at Wanderlust Megan. She went on a solo camping trip (!!!) last summer to the region and has shared a lot of her experiences in her blog.

Visiting Desolation Sound Marine Provincial Park is probably the coolest provincial park I’ve visited, all because of the circumstance that surrounds it. In high school (yes I’m talking years ago, but it’s too memorable to not mention), I was given the opportunity to learn how to sail in Desolation Sound. The name is no joke, it really is desolate, but so serene and beautiful. Desolation Sound is located on the Sunshine Coast of BC, 150 km north of Vancouver.

I’m on a boat! I could have sworn I had a pic of me behind the wheel, but this will have to do.

I was on a boat with 5 of my friends and an instructor learning how to sail and navigate. At the end of it I came away with a boating license. I like to joke that I learned how to drive a boat before I even sat behind the wheel of a car. Not that I’ve been boating since. I also found out during that trip that I don’t like being on a small (if you call 40 ft small) boat.

We went on a hike up the mountain to see a waterfall. That’ll be our boat in the background.

Hurray for pre-digital camera days, but I think the red flare adds something to the image doesn’t it?

The only way to see this park is on the water either by boat or kayak, the latter you can rent from nearby Powell River. The park has more than 60 km of shoreline, several islands and numerous small bays and picturesque coves. There are plenty of trails and waterfalls to explore. There is an option to camp in the park as well. I would love to return to the area one day. It’s so beautiful.

For those unable to sail and visit the coves of Desolation Sound, you have Porteau Cove Provincial Park. An hours drive out of Vancouver, en route to Whistler, lies Porteau Cove on the most southerly fjord in North America.

I’ve only been here during the day, but there are options for camping or renting a cabin as well. You can go swimming, explore the beach and pier area or go windsurfing. This is also a popular place for scuba divers. Two ships were sunk in the area to provide interest for divers and to encourage marine life.

Which of these would you most like to visit? Do you like camping or do you prefer to stay where there is running water?