You are here: Home / Destinations / Going Underground at Postojna Caves, Slovenia
Some posts on this site contain affiliate links, meaning if you book or buy something through one of these links, I may earn a small commission (at no extra cost to you!). You can read my full disclosure policy here.

The Postojna Caves is the largest cave system in Slovenia with over 21 km of passages, galleries and halls. The caves have been open to the public for over 200 years, making it one of the first caves to be turned into a tourist attraction. 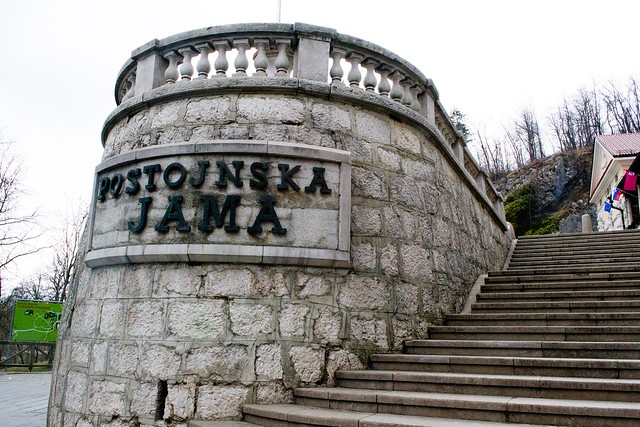 I’ve never been one for going underground. I find spaces like that claustrophobic and I’m constantly worried that the ground above or below is just going to give out resulting in me being crushed to death with no way of escape.

Over active imagination? I think so.

My friends wanted to go so I put on my big girl pants and went along. If travel isn’t for challenging oneself then you might as well just stay at home.

I had a fantastic time exploring the caves and I didn’t feel claustrophobic at all (okay, maybe a little at the beginning. It was a bit disorienting and so dark inside, but it was fine after a minute).

Some people said that the caves looked too touristy and a bit tacky, especially with the advertised train ride. I didn’t feel it was at all. The train is only there to take you from the entrance into the cave where you get to walk around. 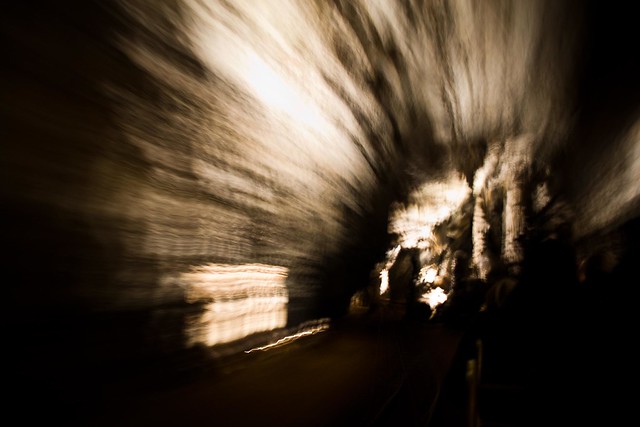 On the train speeding into the caves

Once you get into the main part of the cave, they break you up into smaller groups with tours in a variety of languages. Even though you’re in a smaller group, I still found it difficult to hear my guide. The chambers are large, sound just gets lost and there are so many other groups with different languages that you can’t help but overhear. I was there in the off season so I can’t imagine what it would be like in the summer.

Looking up at the Russian Bridge that connects two parts of the cave.

Thanks to elementary school geology classes, while wandering around, I successfully remembered the difference between a stalactite and a stalagmite. Stalactite has a c in it for ceiling and stalagmite has a g in it for ground. Simple!

The Most Famous Stalagmite

The most famous stalagmite inside the caves is called the Brilliant. It stands at 5 meters tall and is so shiny and so white. No wonder they gave it that name. This stalagmite stands underneath a consistent and even drip from the ceiling which gives it that beautiful shiny white colour.

Did you know 1 mm of stalactites takes 10 years to form? One of the many cool facts you learn on the tour. It really makes you appreciate how old these caves are.

My favourite room was the White Hall.

Look at it. It’s gorgeous.

Everything is beautifully white from the pure calcite.

The caves are also home to the human fish or the olm (proteus anguinus), the largest troglodytic amphibian in the world. These blind amphibians get their nickname from their human coloring. It is a neotenic animal which means, despite looking like a baby, the animal actually has adult-like functions. They can grow up to 16 inches long. They look a bit creepy to me!

The coolest part was being able to send postcards from the 112 year old underground post office. Seeing how much I love sending postcards, I was all over this. Postcards for all! The post office was located inside the room they call the concert hall. With a massive ceiling, perfect for acoustics, they occasionally hold concerts inside. That would be a fantastic way to spend a couple of hours!

I thoroughly enjoyed my time at Postojna and would love to explore the nearby Skocjan Caves the next time I’m in the area. I didn’t feel claustrophobic and my worries were for naught. Maybe one day I’ll be brave enough to try some caving!

Have you been inside a cave? Did you enjoy it?

All photos inside the cave were provided courtesy of Postojna Caves. Photography is not allowed inside.

Know Before You Go

« A Perfect Day at Lake Bled, Slovenia
Predjama Castle – Not Your Typical Castle »