You are here: Home / Destinations / Discovering the Treasures of Berlin’s Museum Island
Some posts on this site contain affiliate links, meaning if you book or buy something through one of these links, I may earn a small commission (at no extra cost to you!). You can read my full disclosure policy here.

In the heart of Berlin, there lies a little island in the middle of the Spree river. On it are five world-renowned museums that make up Museum Island, a UNESCO World Heritage Site. Each of the museums, built between 1824 and 1930, are home to art exhibitions.

Overlooking part of Museum Island from the Berlin Cathedral

These museums depict the evolution of museum design as each of the museums were built and its collections of artifacts and art span 6000 years of history. That’s incredible that in a day (if you up for a very hectic day!), you can have the potential to walk through 6000 years of history all on an island in Berlin!

The five museums are:

Beyond the museum themselves, the island that they’re set on is worth a wander as well. With pedestrian bridges connecting it to the rest of the city, it’s very picturesque to walk through, especially in the fall with the changing and falling leaves. 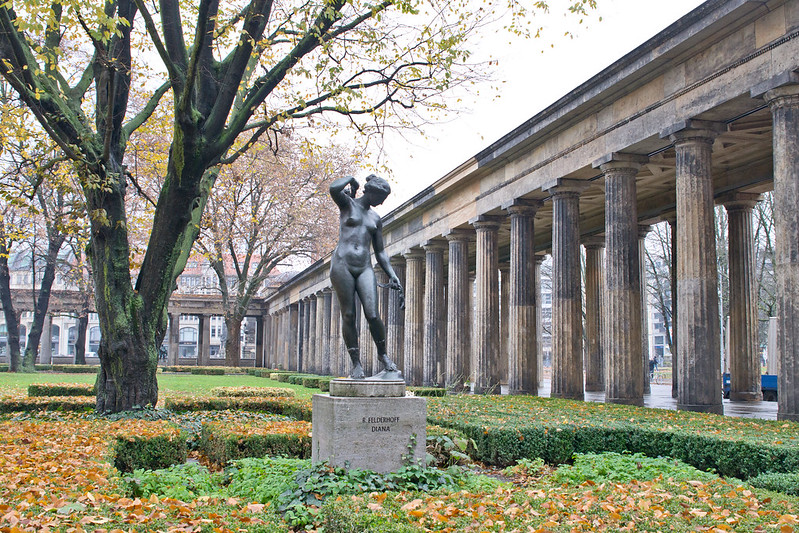 With limited time in the city and so much to do, I was only able to visit The Pergamon and the Neues Museum.

The Pergamon is easily my favourite museum of the bunch. Massive, grand displays is what I associate with the Pergamon and it’s really impressive to see it up close. 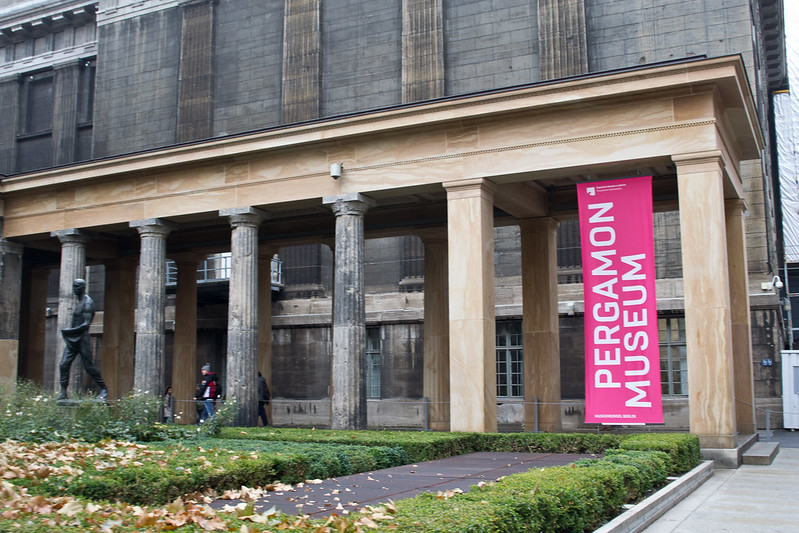 It is currently undergoing restoration rendering its namesake inaccessible and closed to the public. I still remember heading into the Pergamon on my last visit to Berlin, not knowing what to expect, and walking into this huge, bright, white room where all you see is the Pergamon Altar in all its glory. 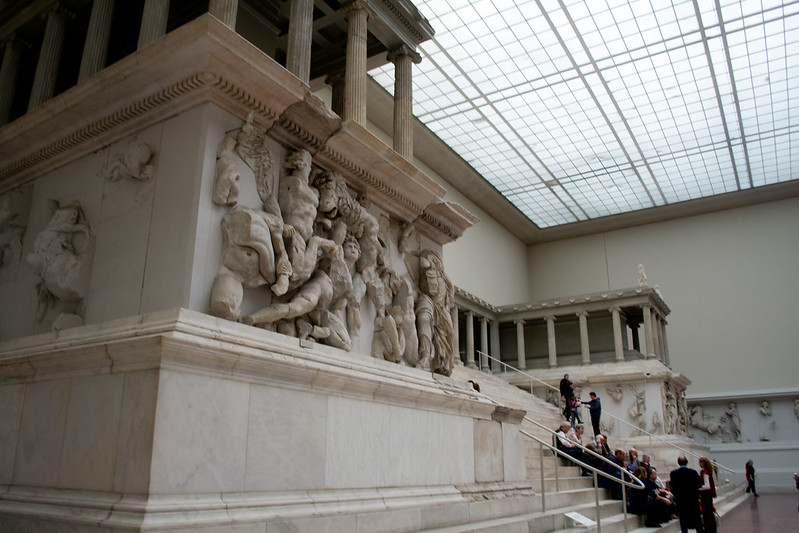 It’s huge and encompasses the whole room. You can only imagine what it must have been like before it was excavated and moved to the museum. That feeling of grandness as endeared me to the museum and so it was much to my disappointment to find out that it was being restored during this visit. 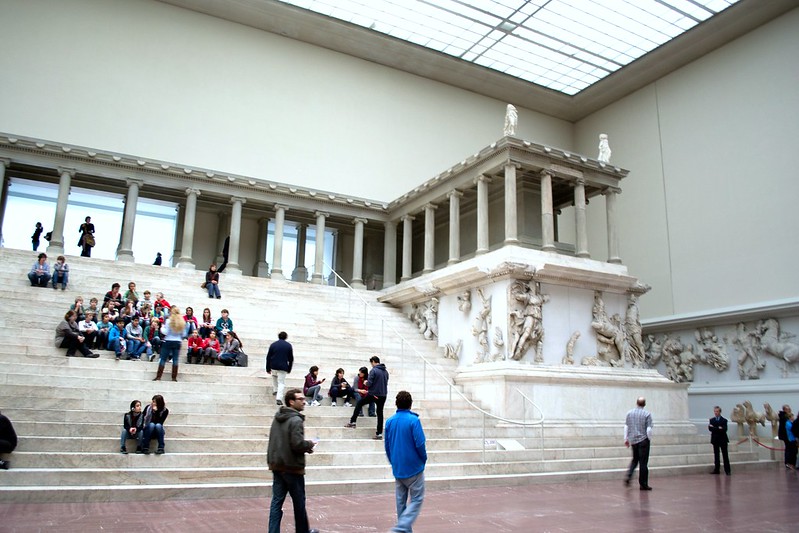 Regardless, the rest of the museum is equally interesting with huge gateways and interesting items from Assyrian, Sumerian and Babylonian culture. Walking through the Procession Way of Babylon towards the Ishtar Gate, the 8th gate into the inner city of Babylon, again you can only imagine what it must have been like to walk down it in its full form. The detailing along the walkway and the gate itself are incredible. 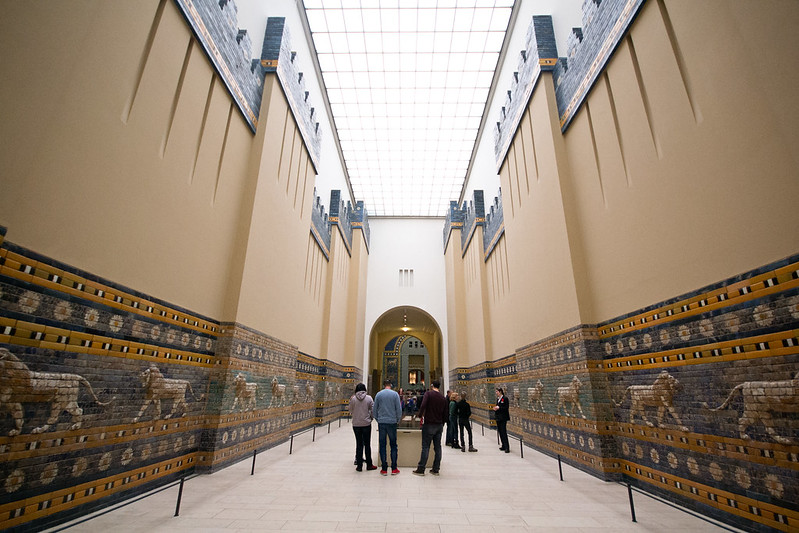 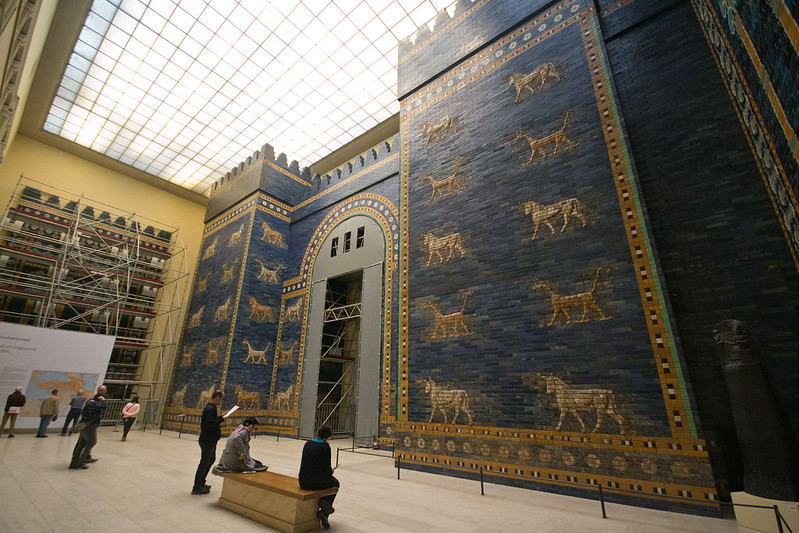 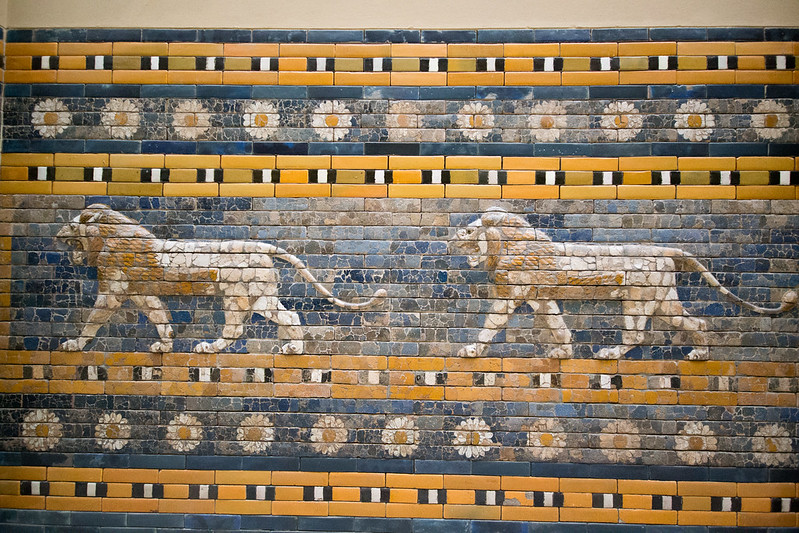 The museum also features a section of Islamic Art with artifacts from 8th to the 19th century from Spain to India with a spotlight on the Middle East including Egypt and Iran. Items of note in this area are the Alhambra Cupola, taken from Alhambra in Granada, the Mschatta Façade from Jordan and the painted wooden panelling in the Aleppo Room, the oldest surviving wall panelling from the territory of the Ottoman Empire. Be sure to pick up a complimentary audio guide which really helps to explain what it is you’re looking at. 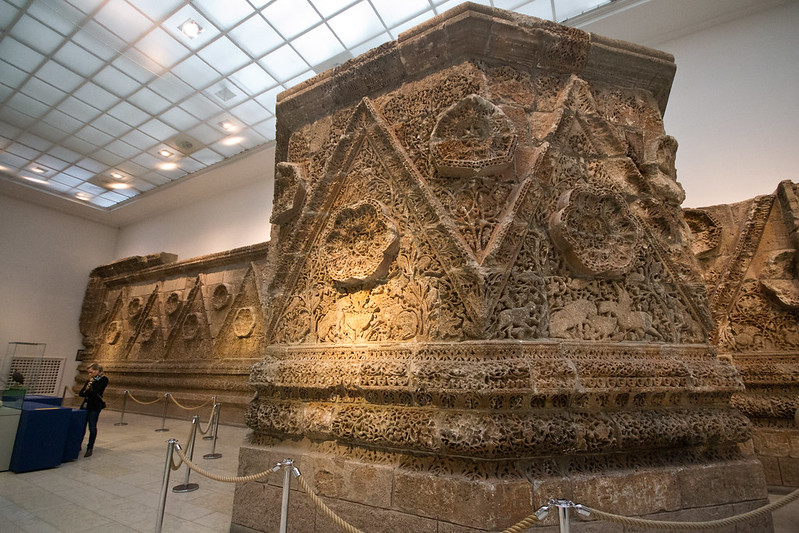 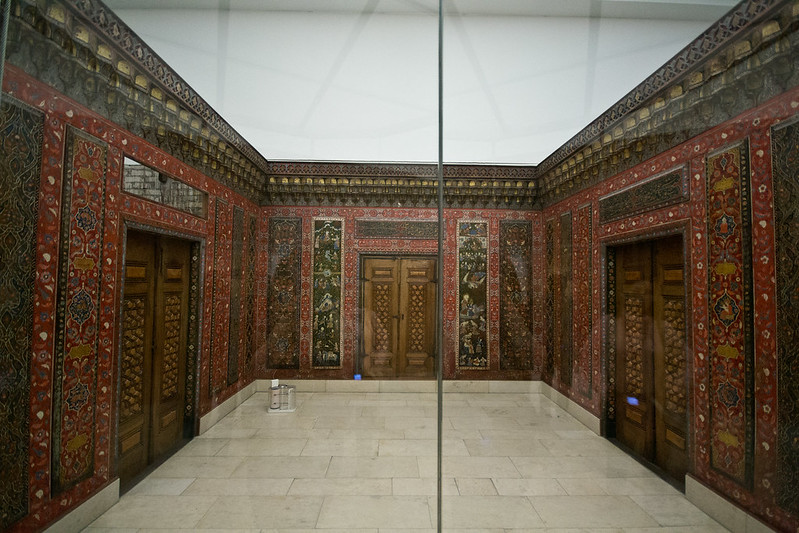 The panel walls of the Aleppo Room

Does anyone else find it a little weird to be seeing these artifacts that have been excavated elsewhere and moved into these grand museums (ie. British Museum in London, the MET in New York City)? However, in this case, it’s almost a good thing since much of the region where these artifacts were pulled from are now areas of conflict. We’re seeing the destruction happening in Aleppo, Syria right now and it’s heartbreaking before and after images of the city, so having these artefacts in museums perhaps is a good way of preserving them for the future?

The Neues Museum is home to two collections: the Egyptian Museum and Papyrus Collection and the Museum of Prehistory and Early History. It’s most famous exhibit is the bust of Nefertiti, the Egyptian queen. 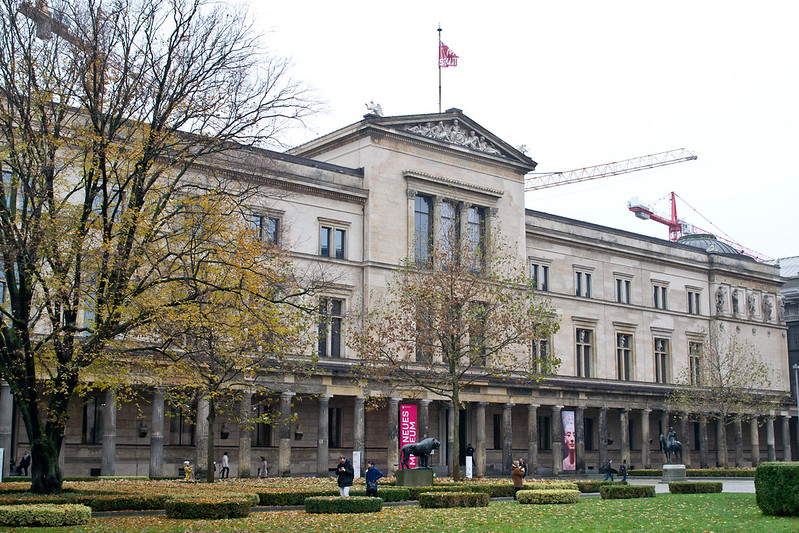 I have a fascination with mummies and the Egyptians so this museum was perfect for me. One of my favourite rooms was the Egyptian courtyard which was full of stone sarcophagus’. Along one wall Books of the Underworld were displayed full of Egyptian hieroglyphics on papyrus which were really interesting to inspect up close. 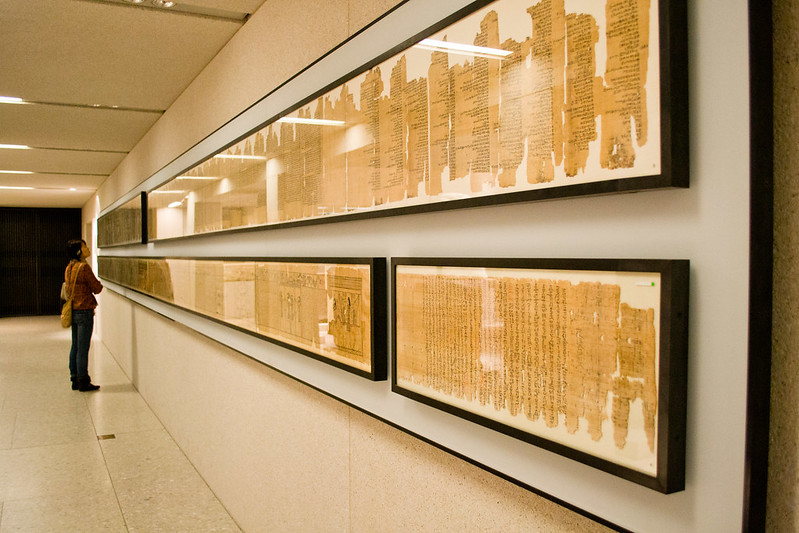 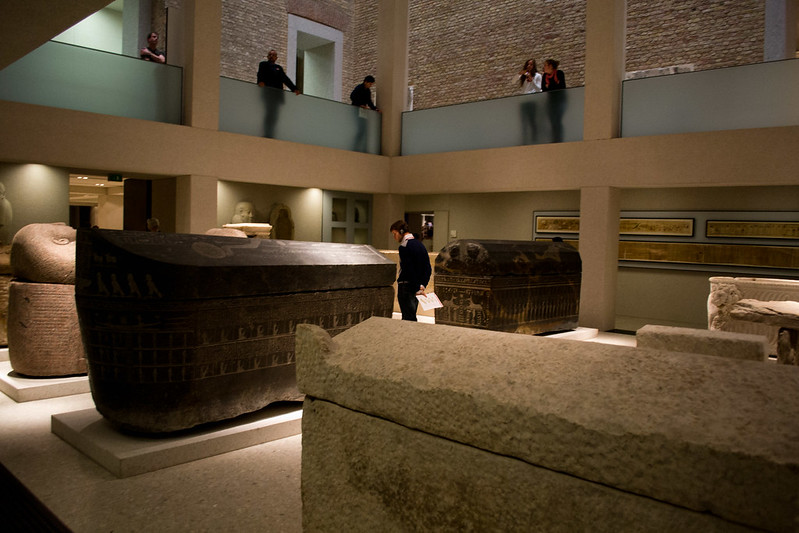 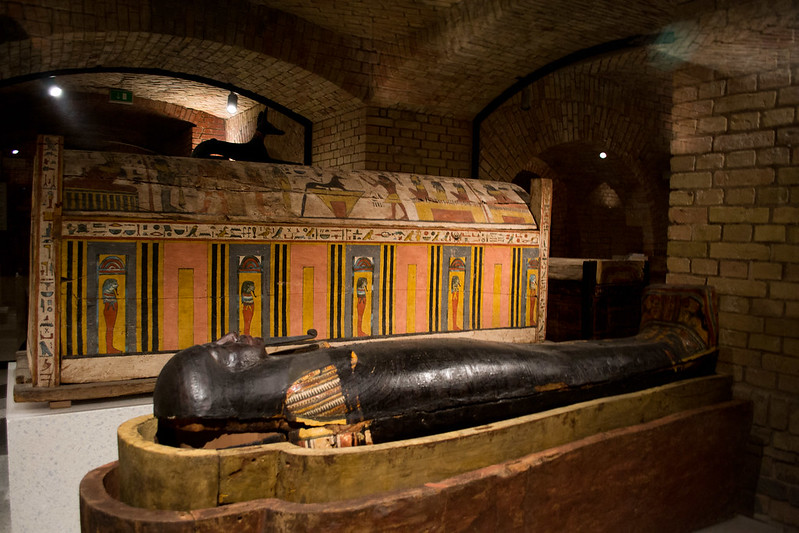 One thing I really enjoyed was the architecture of the building. From the high ceilings of the entryway to the arches in the basement of the building, the way the museum was built further highlighted the artifacts on exhibit. 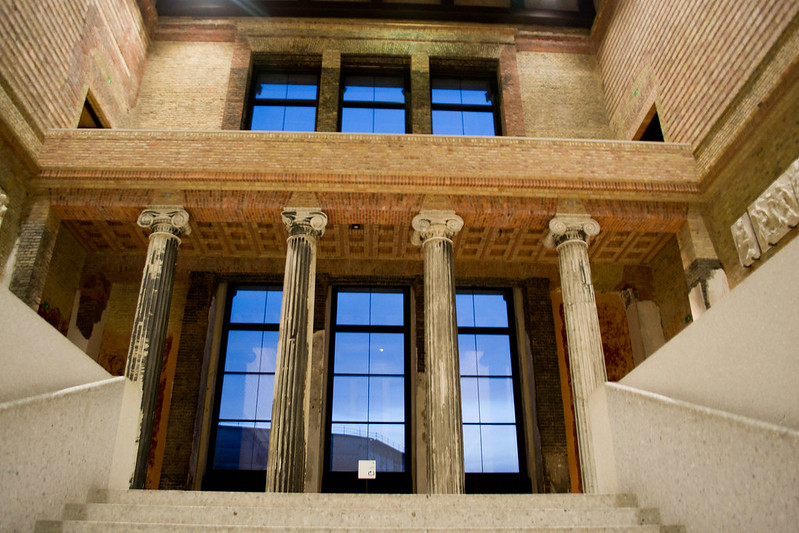 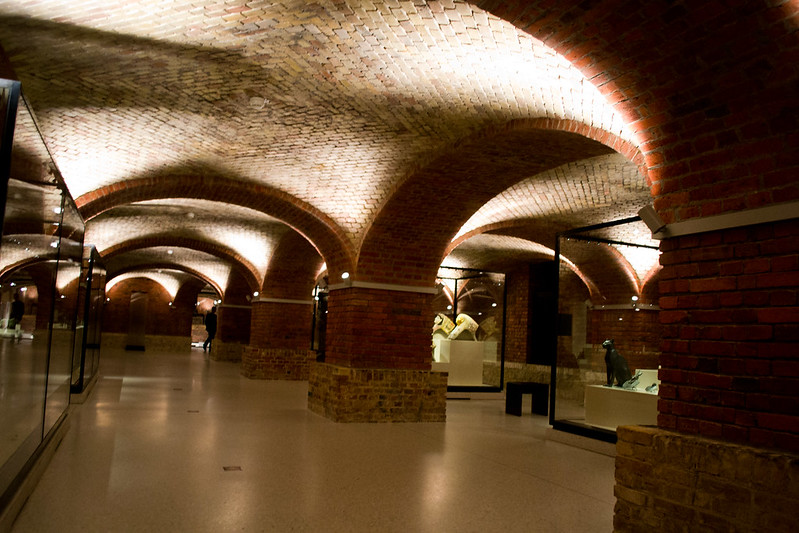 Pretty cool atmosphere to look at artifacts no?

It is surprising to me that the building and museum were only recently opened to the public in 2009. Much of the building was destroyed during World War 2 and was left neglected, in ruins until after the Berlin Wall fell. Yet, during my visit, it didn’t really feel all that modern. Sure, much of the “museum-y” aspects were modern, but the building itself was restored and renovated in a way to keep its historical context.

A Note on Tickets:

My visit to the museums were during the off season so I was able to access the museums without much of a line. However, during high season, lines can stretch quite long. The best way to skip the line is to pick up a Berlin WelcomeCard 72 hours plus Museum Island (44€) which allows you access to the Berlin public transportation system (otherwise 7€ a day, or 30€ for a week), discounts at other tourist attractions as well as all of the museums on the island. Otherwise, individual entry to the museums would set you back 56 euros, or if you’re ambitious and want to see them all in a day, 18 euros. Alternatively, you can also pick up a Berlin Museum Pass which gives you access to museums across the city for 3 days for 24€ which is good value – my first time to Berlin I used this and bought separately a transit pass for multiple days.

Both museums offer significantly more interesting items to explore, however, these were the highlights for me. For fans of art and antiquities, a visit to Berlin’s Museum Island is a must. The area is undergoing mass renovation with each of the five museums eventually being connected together underground. Despite the closed areas of The Pergamon, the museums are a great way to spend a day, especially when you’re confronted with rainy Berlin weather like I was on this trip! The buildings are beautiful and worth the wander, plus you get to see some really cool things from our history.

Experiences in this post were made possible in partnership with Visit Berlin. As always, all opinions and observations are my own.