You are here: Home / Destinations / A Strange Night Out in Metelkova, Slovenia
Some posts on this site contain affiliate links, meaning if you book or buy something through one of these links, I may earn a small commission (at no extra cost to you!). You can read my full disclosure policy here.

When I was in Slovenia, I happened to have a friend who was living and working there. We met up for a night on the town.

Before heading out, we tried some of their national beer. It wasn’t any normal beer though – it was flavoured. Hungary has flavoured beer (apple, orange, lemon) as well, but the ones in Slovenia seemed so exotically flavoured. I tried the Red Orange one and it tastes much better than the ones available in Hungary.

Another drink we tried was Borovničevec which is a blueberry liqueur. It was very sweet, but also very strong. I actually quite like it, and it tastes much better than the palinka that Hungarians are so fond of. Mixed in with the liqueur are bits of blueberry that have soaked in the alcohol and sugar making it very strong.

That night, they took us to a neighbourhood called Metelkova which is an autonomous social centre in the city. Consisting of 7 buildings, the site became a communal space for artists, vagrants, musicians, outcasts and backpackers to exercise their free will and creativity. The grounds are former military barracks which were squatted in 1993. Now the site is home to a number of nightclubs, artist galleries, concert venues and a prison turned hostel. 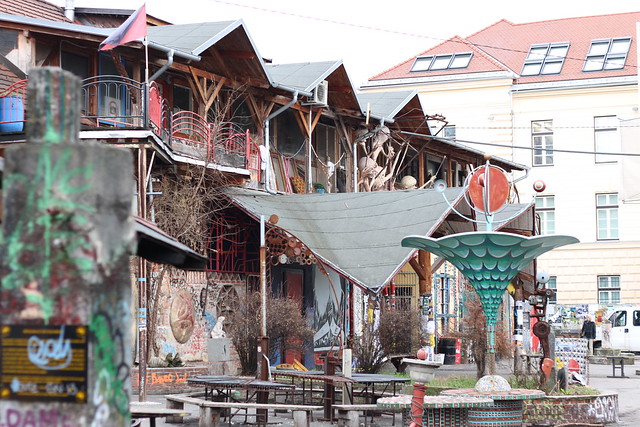 Prior to going, I had no idea what I was walking into or what to expect. The others had assured me that we were walking into a very alternative part of Ljubljana which didn’t help put me at ease. At first, I was a bit creeped out by the strange artwork and sculptures in the moonlight. Plus, it was extremely busy with tons of extremely drunk people wandering about and being rowdy. Once I relaxed and started taking in the atmosphere, it wasn’t so bad.

We ducked into a strange building full of graffiti, got our hands stamped and headed down a long hallway decorated with advertisements for bands and shows. Through an unmarked door and we entered a dark room with very loud Slovenian music. On occasion, a familiar tune would pop up, but mostly, it was music that I never heard before. With a beer in hand, I bobbed away the night. 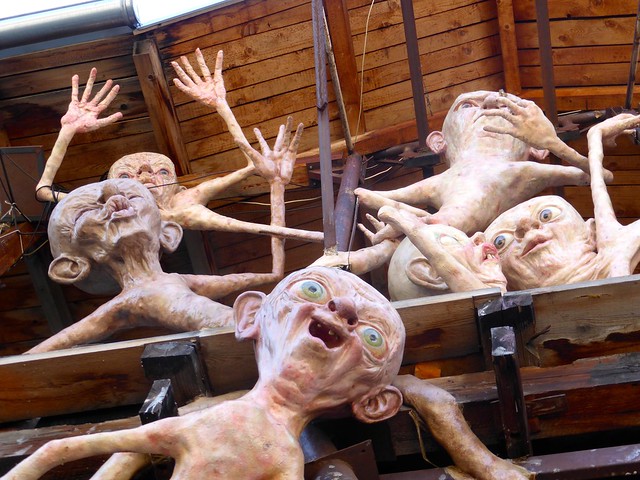 Seeing this at night? Not so much fun. Photo: Michael R Perry

Under the cover of darkness, unpronounceable street names and twisted roads, I really had no idea where we were in relation to the rest of Ljubljana and our hostel. Of course, I didn’t have a map on me. My local friends wanted to stay longer, but my friend and I had a long day and decided to call it a night.

Getting back to our hostel was an adventure and a half. Wandering around medieval Ljubljana at night was a magical experience, though. All the bridges were beautifully lit with quiet cobbled streets.  I didn’t have a camera with me so I wish I could share the pictures I have in my memories with you.

In the end, my night at Metelkova was a very cool experience. I have never seen anything like it. I wish I could have gone in the daylight as well just to see the different buildings properly. In many ways, it was almost like we were Alice stepping into Wonderland filled with bright colours and patterns, where up was down, and nothing made sense.