You are here: Home / Destinations / The Beautiful and Fantastic Bridges of Ljubljana
Some posts on this site contain affiliate links, meaning if you book or buy something through one of these links, I may earn a small commission (at no extra cost to you!). You can read my full disclosure policy here.

Wandering about Ljubljana, you’d be immediately struck by how many bridges there are connecting parts of the inner city. You’d probably think that there is nothing special about the bridges – they just connect medieval Ljubljana to modern Ljubljana, more a means to an end. However, if you look closely, you can easily tell them apart. Each of them have unique features and have their own stories to tell. 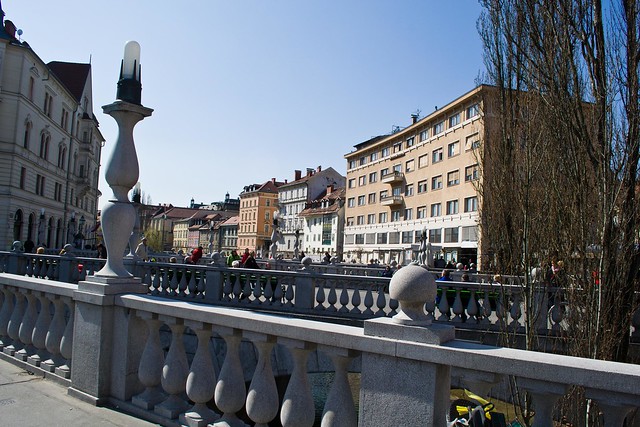 Crossing the river from Ljubljana’s main square, Prešeren Square, is the famous Triple Bridge. Originally only one bridge stood here. With increasing traffic over the bridge, plans were made to add two additional pedestrian-only bridges on either side.

Now, the whole area is a pedestrian only area. At night, these bridges are all lit up with lights, making for a very pretty scene – and in many ways looks Italian. An icon of Ljubljana, you can see a version of this bridge Mini-Europe in Brussels. 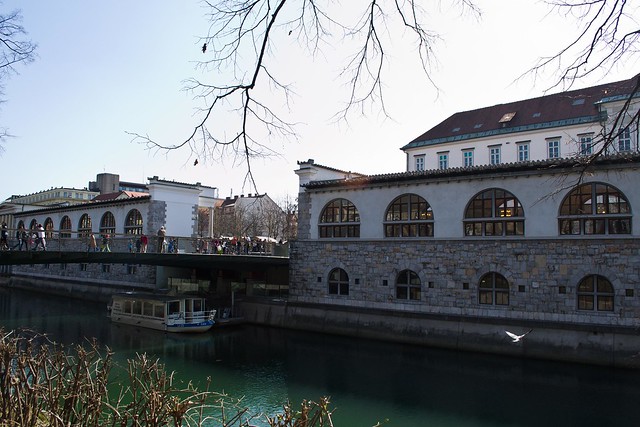 Butchers’ Bridge, connects the Ljubljana market with the other side of the Ljubljanica river. This bridge was originally planned to be installed in the late 1930s, but with the start of World War II, the plans for the bridge were never fulfilled. Nearly fifty years later, the plans were revisited, and the bridge built. Originally the bridge was to be covered and be a part of the market, but now its a pedestrian-only crossing. 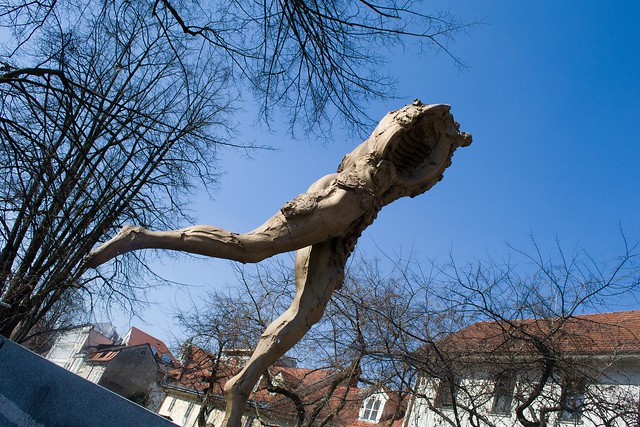 There are a couple of sculptures on the bridge, most noticeable is the running and disemboweled figure of Prometheus who was being punished for giving knowledge of fire to mankind. There are also a number of grotesque sculptures of frogs and shellfish decorating the top of the bridge fence which are really strange. 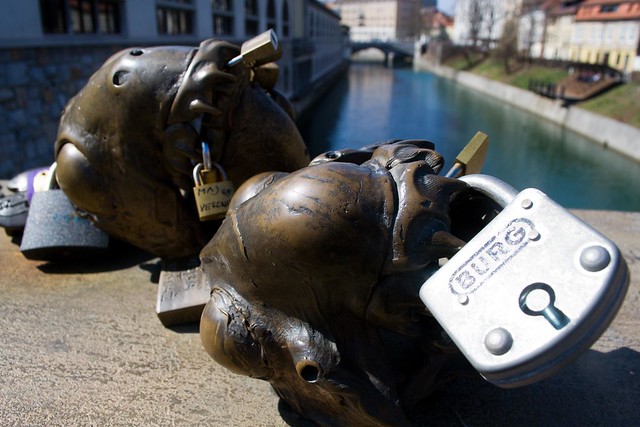 Despite its name, many local and foreign couples have chosen this bridge to be one of the world’s ‘love bridges.” Dotted along the steel cables, are padlocks with initials and names etched in. Couples come and place their lock on the bridge, throwing their key into the river, symbolizing their undying and forever love. This practice of latching padlocks engraved with the names of couples in love isn’t unique to the Butchers’ Bridge in Ljubljana and the most famous display is probably the Pont des Arts in Paris. 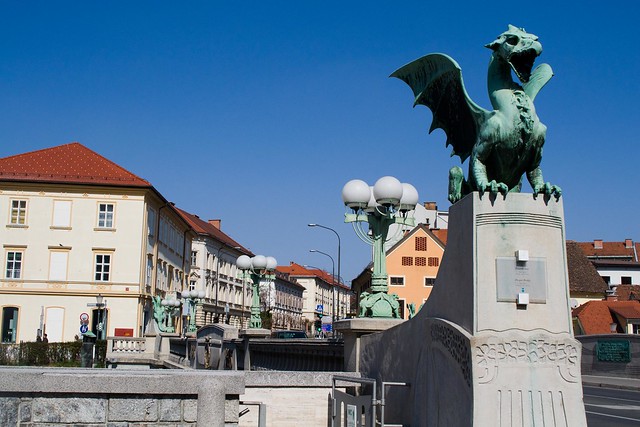 My favourite bridge of the bunch because of the beautiful dragons that decorate it. This bridge connects to the other end of the Ljubljana market. Originally it was named after Franz Josef I, but was renamed shortly after as the Dragon Bridge due to the 4 dragons that perch on the four corners of the bridge. The Dragon, is actually a common motif found around Ljubljana; it can be found on the coat of arms for Ljubljana.

Where does this dragon come from? According to legend:

Greek hero Jason and his Argonaut comrades stole a golden fleece, the coat of a golden ram, from the King of Colchis on the Black Sea. On board the Argo they fled their pursuers and found themselves at the mouth of the River Danube instead of going south towards the Aegean Sea and their Greek homeland. There was no way back, so they went on, up the Danube and then along the River Ljubljanica. They had to stop at the source of the Ljubljanica and overwintered here. They then took the Argo apart and in the spring carried it on their shoulders to the Adriatic coast, where they put it back together again and went on their way. According to the legend, on their arrival between what is now Vrhnika and Ljubljana, the Argonauts came across a large lake with a marsh alongside. Here lived a terrible marsh dragon that Jason killed after a heroic struggle. The monster would have been the Ljubljana dragon. It is said that Jason should have been the first real Ljubljana citizen. (source) 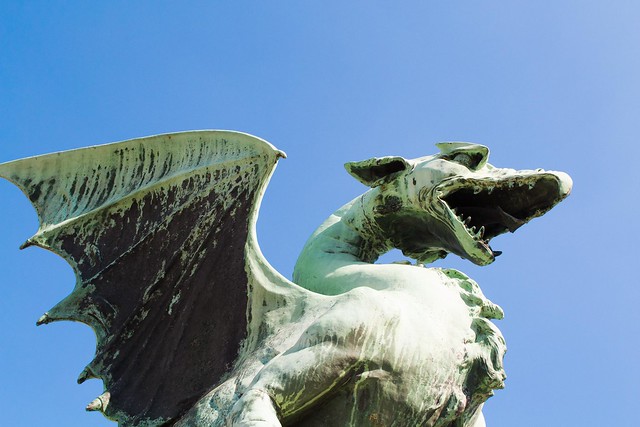 Everywhere you go in the there is this dragon motif. I even picked up a magnet of the city complete with dragon on it. 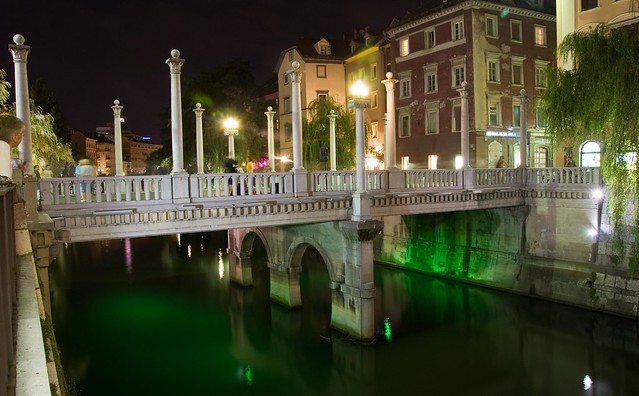 The oldest bridge of medieval Ljubljana, it dates back to at least the 13th century. Originally a wooden bridge, and most likely a drawbridge, many shoemakers set up their workshops on the bridge which is why it is called the Shoemaker’s or Cobbler’s Bridge. The six pillars that rise up from the bridge on either side were remnants of a planned roof. 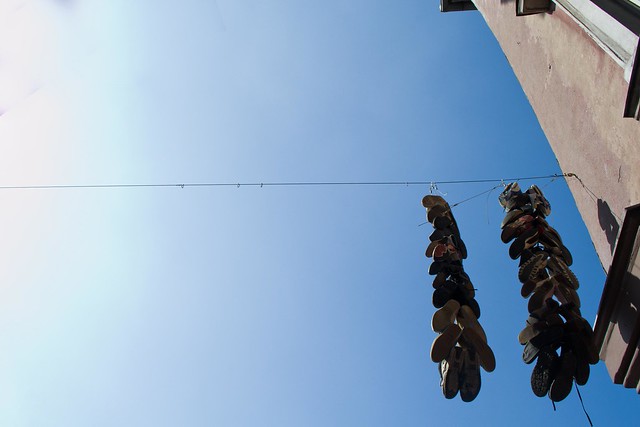 Today while there are no more shoemaker stalls, if you look up, you might spot a few individuals playing homage to the bridge’s name by slinging their old and worn shoes onto power lines nearby.

There are plenty of other bridges in the city, but these are the ones with the most interesting stories. When exploring Ljubljana, think about all the history that these bridges have seen and how many people have wandered over them.

« 7 Free Things To Do in Ljubljana
A Strange Night Out in Metelkova, Slovenia »