You are here: Home / Destinations / Asia / Visiting the Stunning Kinkaku-ji: Kyoto’s Golden Pavilion
Some posts on this site contain affiliate links, meaning if you book or buy something through one of these links, I may earn a small commission (at no extra cost to you!). You can read my full disclosure policy here.

With over 1600 temples in Kyoto, it can be overwhelming to decide which ones to see. After a lot of sightseeing, you can run into temple fatigue. I definitely did. That said, I can easily pick out my favourite one of the bunch. Kinkaku-ji, or the Golden Pavilion, in one word, is simply stunning.

As you round the corner on the pavilion grounds, you’re hit with a bright golden light in your eye. First from the pavilion itself, and second from the glimmer off the water. I remember muttering a “wow” to myself as I walked forward to get a better glimpse. This is a case of where not over planning won. I really had no expectations as to what to expect at this temple. 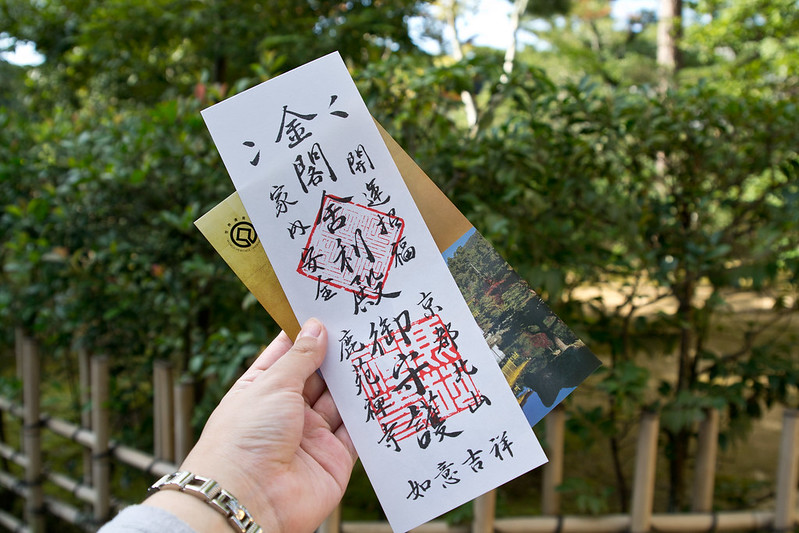 Even the ticket is pretty

The Golden Pavilion sits above a pond surrounded by water and trees making it picture perfect. The reflection of the building shimmers and dances with the movement of the water. For a moment you can pretend you’re royalty, come home after a long day of shopping, before the crowds of tourists shoving cameras in your face remind you that you’re not.

Despite the calm and serene in these photos, the scene behind me was anything but that. We had arrived just before closing as was recommended to avoid crowds, but it was clear that they got the same memo and the gardens were still incredibly full of people. There were a few tour groups there as well which didn’t help with the crowds. 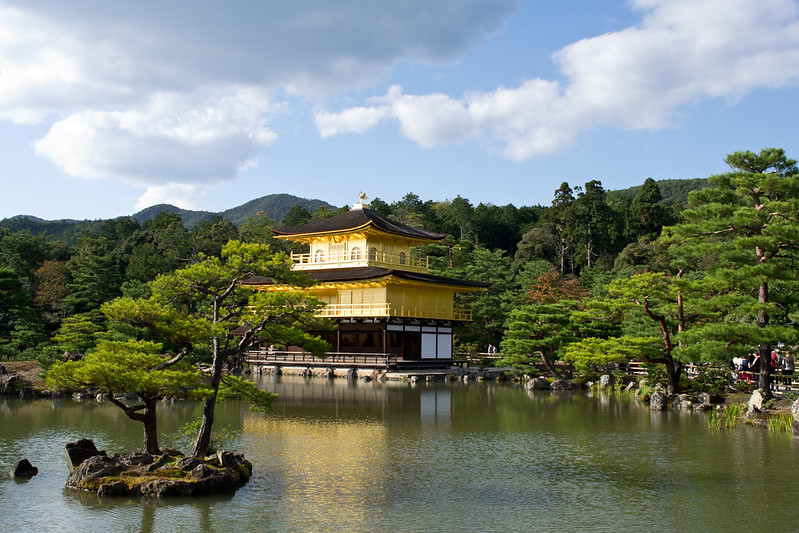 A Little Bit of History

The pavilion was originally a retirement villa for a shogun which was later transformed into a Zen temple upon his death in 1408. However, this is not the pavilion you see today. The one currently standing on the grounds was rebuilt in 1955 following an arson incident in 1950. Between the two versions, there were different versions of the temple as it was rebuilt after wars and fires that destroyed the building. 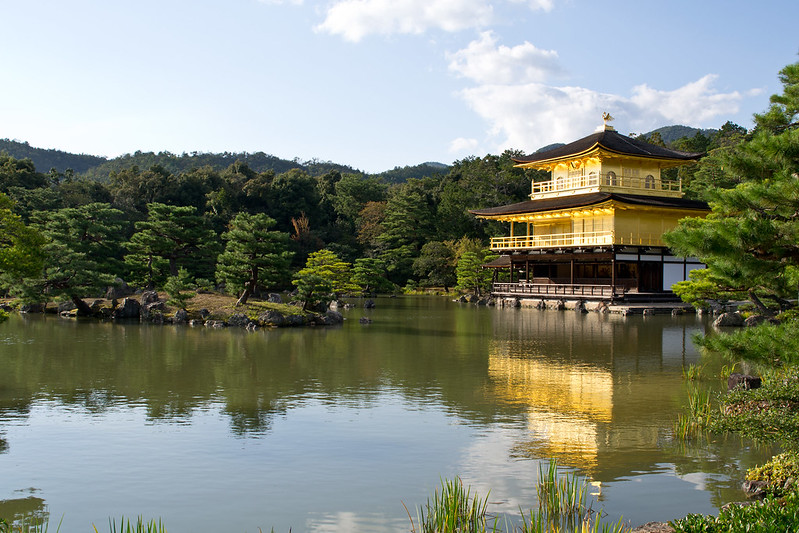 Each of the three floors of the pavilion were built with three different styles of architecture. The top two are covered in gold leaf, giving the building its signature look and name. The gold seen today is also a recent application having been updated in 1997. Unfortunately, you’re not able to go inside the temple. 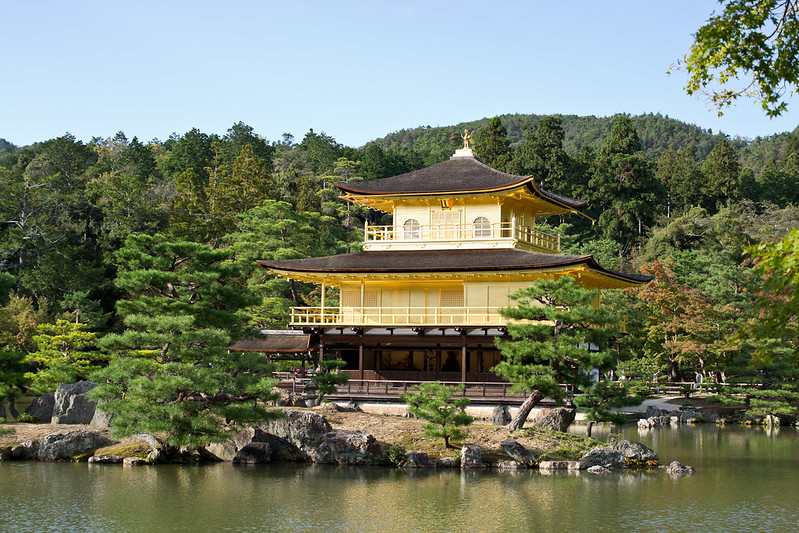 Other Things to See

Also, on the grounds are the head priest’s former living quarters (hojo), the temple’s gardens which have retained their original design, and a teahouse. While pretty, the gardens are nothing spectacular. 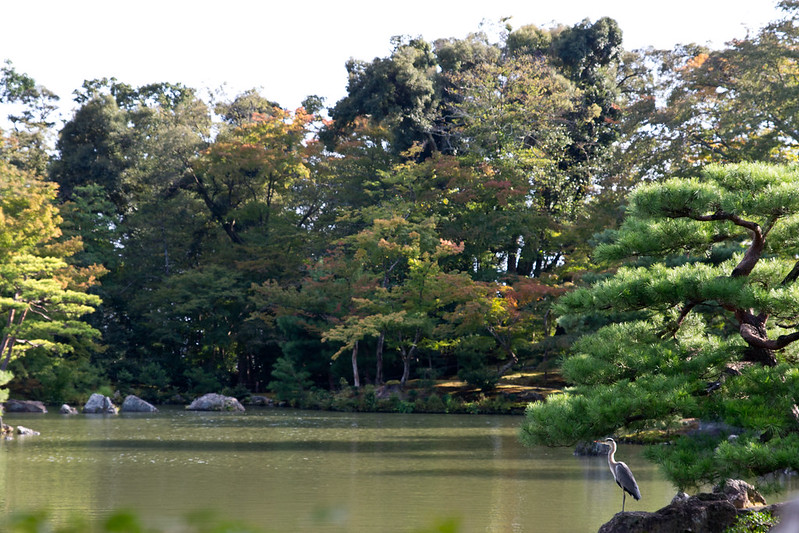 We did spot a heron, though.

However, the garden’s paths allow for a variety of view of the pavilion and a closer look of its backside as well. 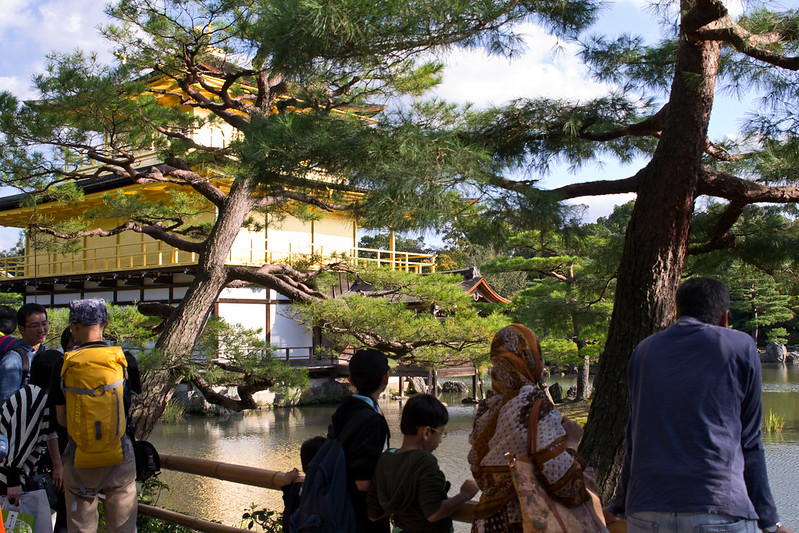 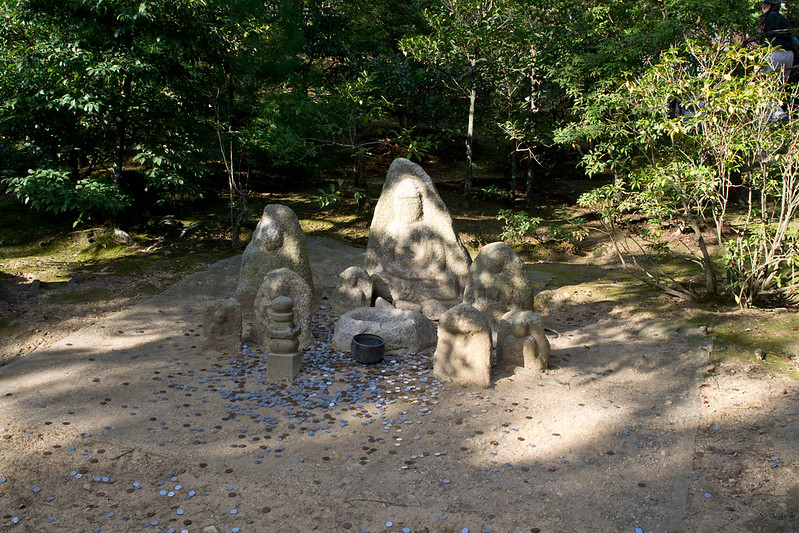 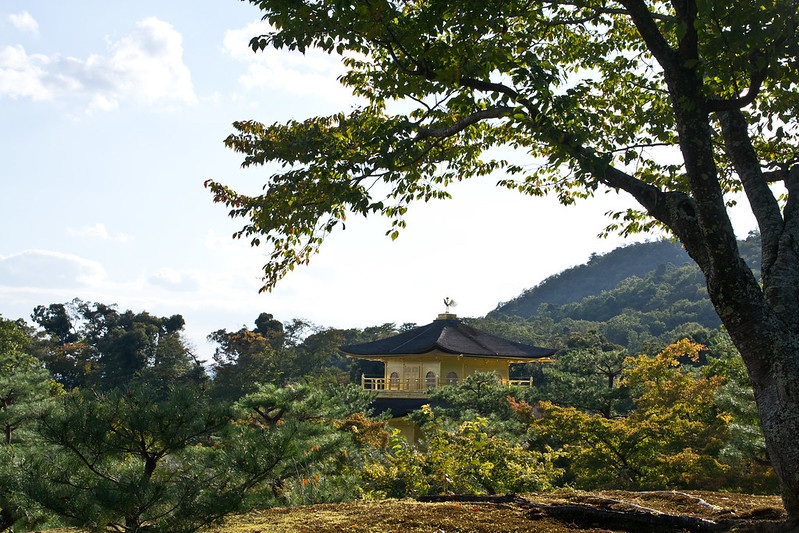 While what we see today at the Golden Pavilion isn’t necessarily indicative of what it looked like in the past and has been updated to maintain its glamour, it’s still gorgeous and well worth the ‎¥400 admission price to get a glimpse. That first wow factor still sits with me even when I look at my photos again.

Getting There: Bus 205 from Kyoto Station. There is a bus stop just down the street from the entrance to the temple grounds.

If you plan on getting photos, think about where the light will be and plan accordingly. Our afternoon light was a bit harsh to take photos of people but allowed the pavilion to shine (literally) spectacularly.

Beyond viewing the temple itself, there isn’t too much to see and do on the temple’s grounds. Plan for about an hour to visit depending on how long you want to view the temple and how long it takes for you to walk the winding road to the exit.

This post is linked up to Travel Tuesday with Slightly Astray and Bonnie Rose.