You are here: Home / Destinations / Take a Journey to Churchill at the Assiniboine Park Zoo
Some posts on this site contain affiliate links, meaning if you book or buy something through one of these links, I may earn a small commission (at no extra cost to you!). You can read my full disclosure policy here.

One of the things I want to do in my life is to go see the polar bears in Churchill in Northern Manitoba. With my adversity to cold (I know, I make a terrible Canadian, but in my defense, it doesn’t get cold in Vancouver!), and the cost of getting to Churchill in the middle of winter, it just hasn’t happened yet. Until then, visiting the Journey to Churchill exhibit at the Assiniboine Park Zoo allowed me to get my polar bear obsession fulfilled. 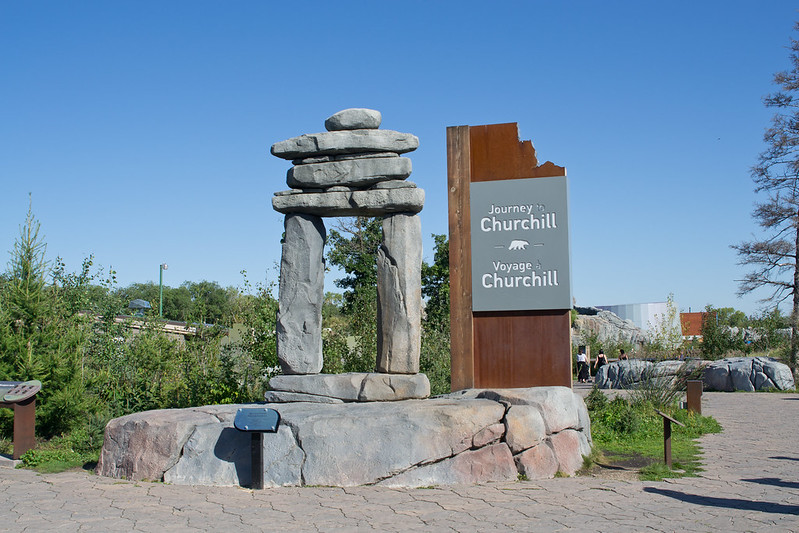 The Journey to Churchill exhibit is the most comprehensive northern species exhibit in the world featuring polar bears, muskoxen, Arctic fox, wolves and other northern species. Spreading across 10 acres, the exhibit takes you from the Wapusk Lowlands to the tundra of the Arctic. While I was able to spot a few snowy owls, much of the animals in this area were hidden. 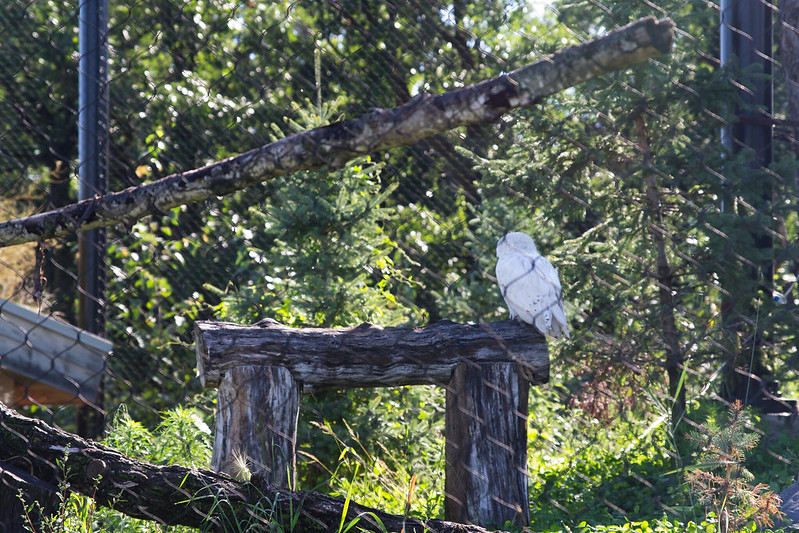 Hedwig, is that you? (Spoiler: no)

To complete the experience, the zoo has recreated parts of the Churchill facade down to the “polar bear jail” that the real Churchill uses to house polar bears that wander too close to the city until they can be released back into the wild. 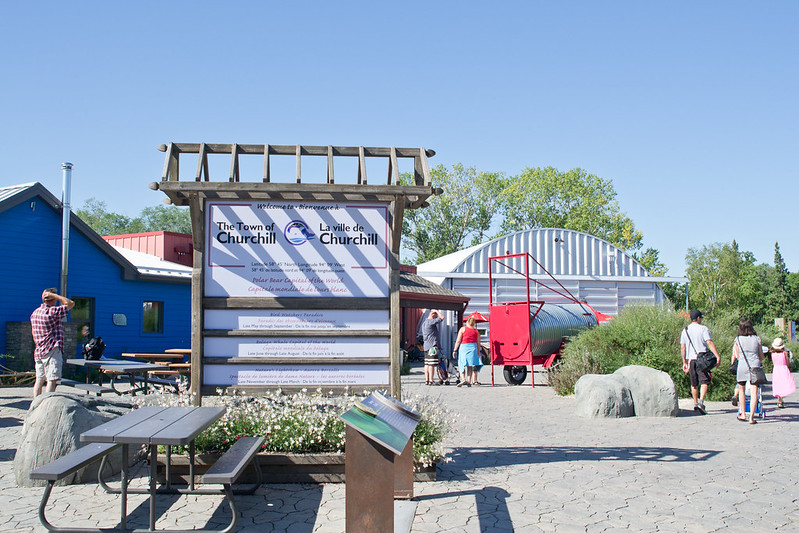 The white building in the back is the “polar bear jail”

Gateway to the Arctic

This exhibit is where the magic happens: the primary viewing point of the zoo’s polar bears as they wander through their vast habitat. Home to seven polar bears, there are a number of viewing points as well as an underwater viewing passage to watch them swim. For their size, it’s incredible how graceful they are underwater. I definitely spent way more time that I should have just watching them move and sunbath. 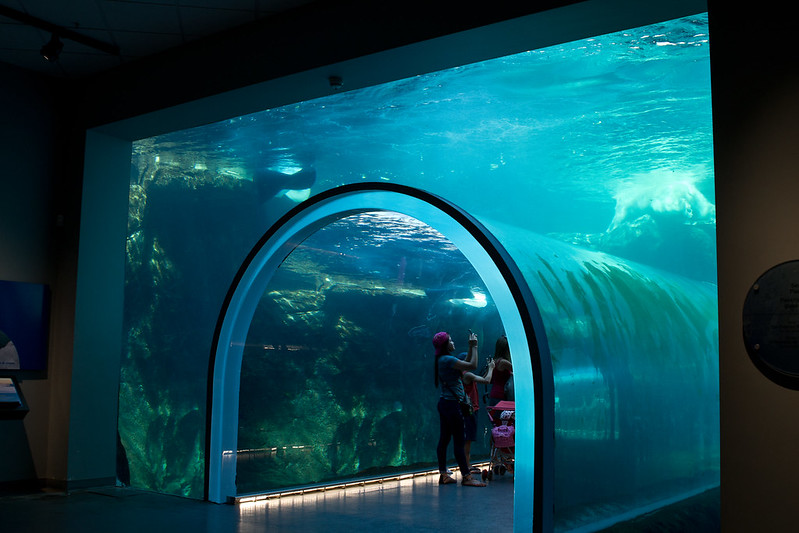 Most of the polar bears were either orphaned cubs rescued from Churchill or brought here from other zoos when their mothers rejected them. 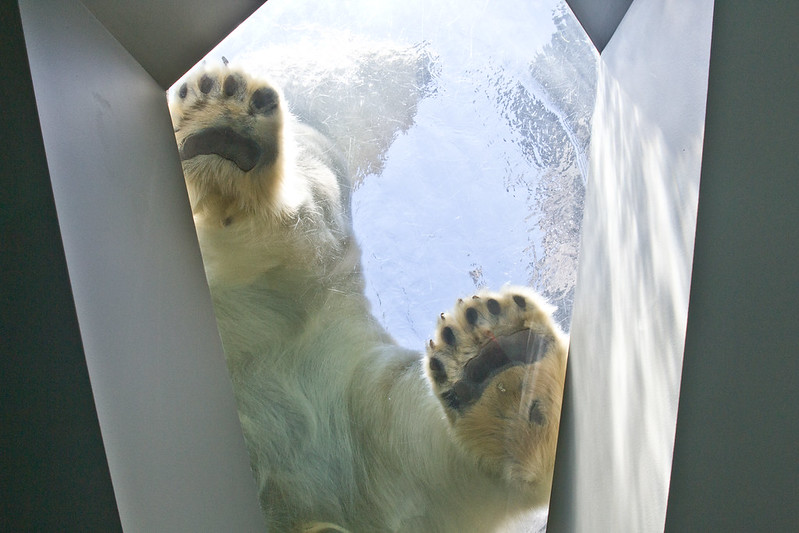 One of the things I was concerned about was the temperature. Don’t polar bears need the cold? It was a hot day on my visit with temperatures rising above 30 C. I was told that weatherwise, Winnipeg and Churchill are quite similar and that the polar bears actually enjoyed the sun and its warmth. You can often find them sunbathing or doing what humans like to do when it’s hot – feet dipped in the water, body lounging in the sun. Of course, if they get too hot they have the option of going swimming or finding a shaded nook to hide in. 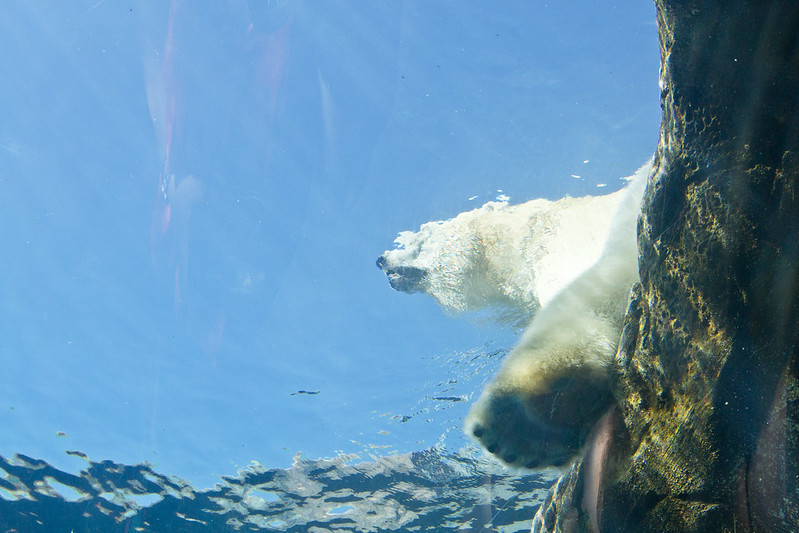 Half in, half out 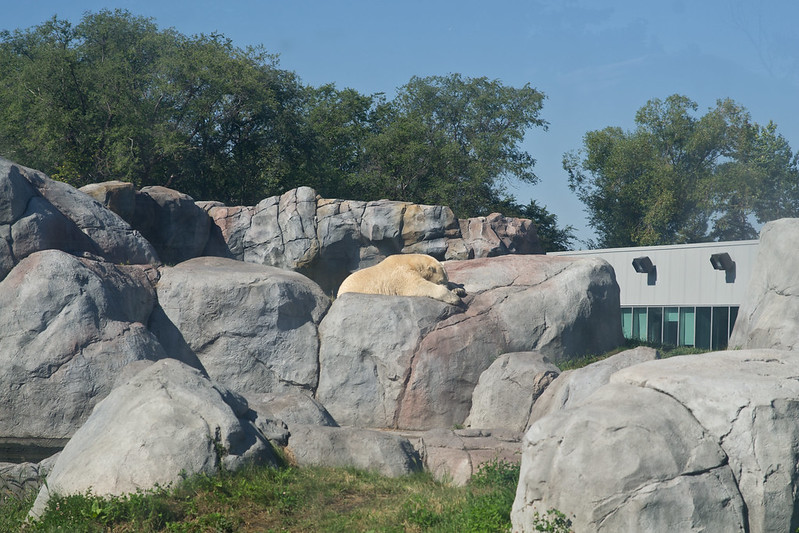 Chillin’ on some rocks

Next to the polar bears are the seals which loved interacting with visitors. Wave a hat around and they will track and follow it. The numerous school groups that were visiting had a blast running around with the seals. It was so cute to watch.

Beyond the animals, there are numerous displays discussing climate change and conservation. The Leatherdale International Polar Bear Conservation Centre highlights these issues as well as discusses what you can do to reduce your footprint. Also in the centre are two orphaned polar bear cubs, York and Eli, who were rescued from Churchill. They would not have survived on their own with the guidance and protection of their mother. 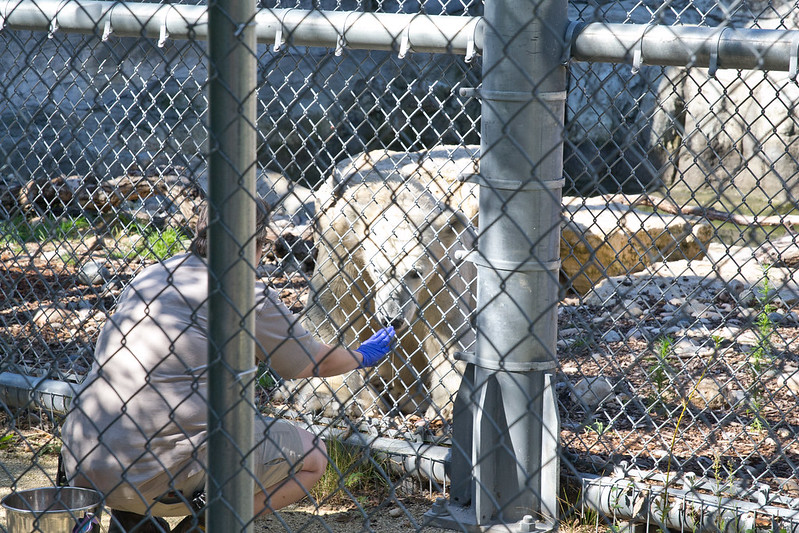 Feeding time! Trying to get the cub to lie down

My visit was well timed as I was able to watch the two cubs be fed and trained. While cute as a button, polar bears are dangerous creatures even as cubs. The trainers only interacted with the cubs through the safety of a fence and communicated with each other during the whole process. 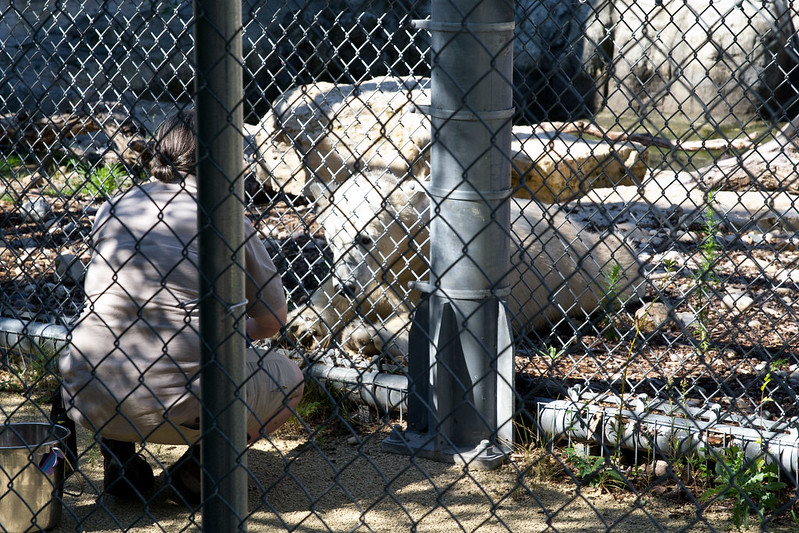 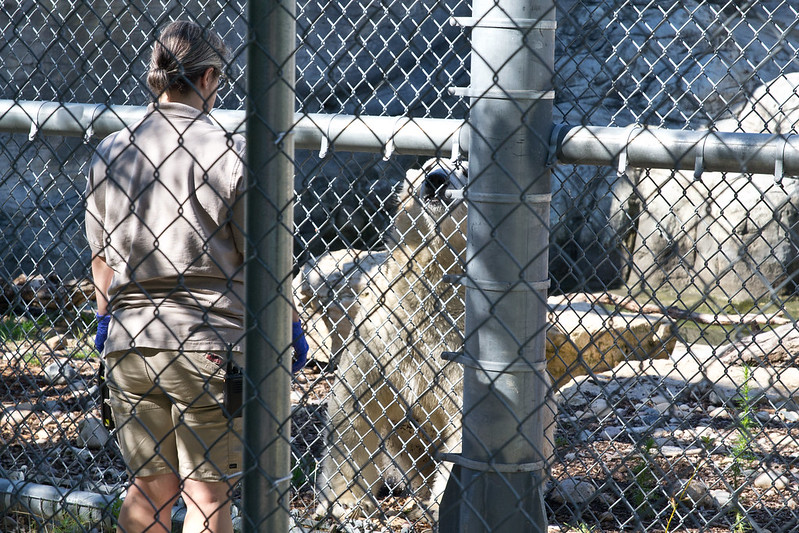 Now time to stand up!

Zoos can be really hit or miss for me. I get really sad when I visit a zoo and find small areas for the animals and in general, I try to avoid these experiences. However, with over 80 acres, the Assiniboine Park Zoo isn’t about this at all. The zoo is in the middle of redevelopment and the majority of the animal enclosures are large with lots of room to roam. There is definitely still areas of improvement needed though as some of the enclosures outside of the Journey to Churchill exhibit were still quite small. For much of my visit, I just felt like I was on a stroll in the park with the occasional animal encounter. 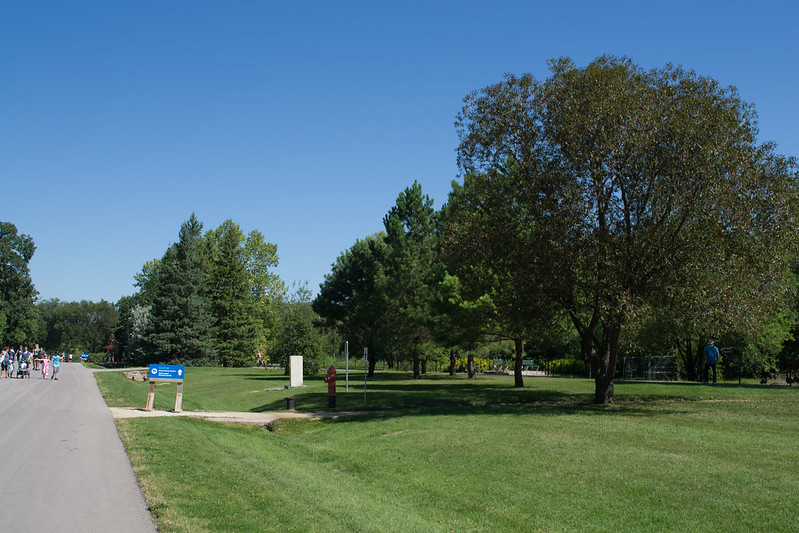 Especially the area for polar bears. There are so many viewpoints and so many hidden areas you can’t see from one side to another. Not to mention, I think I only saw three of the seven that were in the exhibit while the rest were hidden elsewhere. 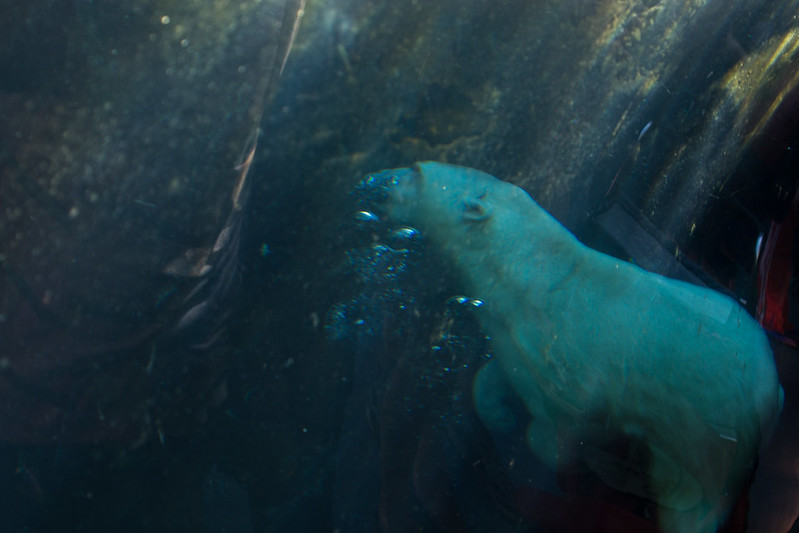 Looking into the seal enclosure. You can’t see the wall in the photo, but it’s there

Beyond just the sheer size of the enclosures, many of them are designed with no visible barriers so the animals can see and smell one another. A prime example is the Gateway to the Arctic exhibit where seals are housed right next to the polar bears with only a clear wall between them. In doing so, they create a dynamic and enriching environment for both species. 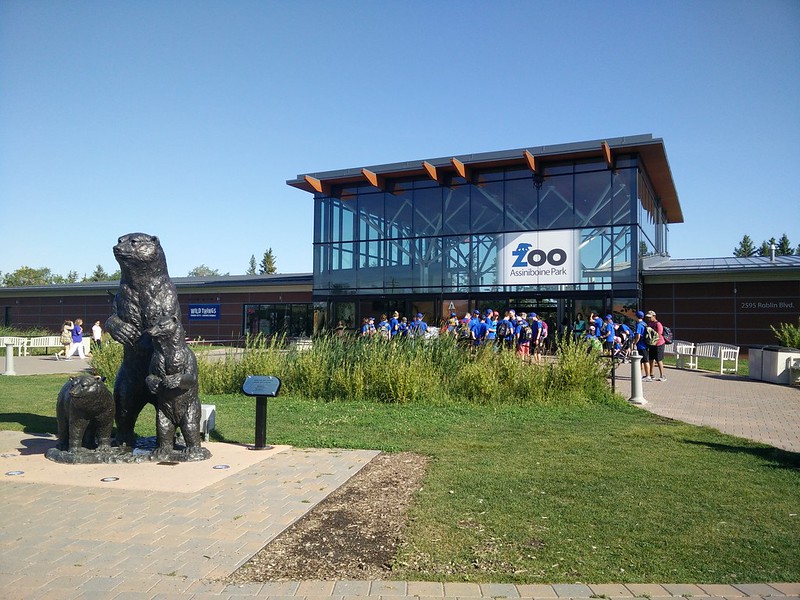 I was pleasantly surprised by my time in at the Assiniboine Park Zoo. I could not stop watching the polar bears and I probably asked too many annoying questions of my guide. There are a number of other areas to explore in the zoo, but due to time, I didn’t get a chance to fully explore them. If you’re as fascinated as I am by animals, but cannot get yourself to Churchill, I recommend the experience at the Journey to Churchill exhibit as a good replacement. It was a wonderful way to spend the morning and left me with a deeper understanding of a little-explored region of the world.

Do you have any desire to see the polar bears in Churchill?

My experiences in this post were made possible in partnership with Tourism Winnipeg and the Assiniboine Park Zoo.