You are here: Home / Destinations / Europe / Croatia / A Day in Zagreb, Croatia
Some posts on this site contain affiliate links, meaning if you book or buy something through one of these links, I may earn a small commission (at no extra cost to you!). You can read my full disclosure policy here.

I spent one quick day in Zagreb on a road trip from Budapest to Ljubljana. Zagreb is the capital and largest city in Croatia and I had no idea what to expect. Croatia is not a part of the Schengen zone, and has only recently joined the EU, so you need your passport to cross the border. There was a short line at the border, but before long we were at the front. They took a quick glance at our documents and then we were through. Nothing like crossing the border by car from Canada to the US.

My first glimpse of the Zagreb was Ban Jelačić Square. There was some sort of festival happening the day we were there so we couldn’t full appreciate the length of the square. The colourful buildings around a main square reminded me in many ways of the main squares in Brussels or Antwerp. Loving the colours and intricate architecture!

We had a couple hours to explore the city, but our first order of business was to get some food in us. One of my friends traveling with us knew someone from Zagreb and she had recommended to us a place to eat. We walked and walked around in circles, making our way down the same streets over and over again. It was difficult to read the street signs and find the right that we were looking for. Getting lost among the streets.

In our wanders to find the restaurant we passed through the Dolac Market. This market, set right above the hustle and bustle of Ban Jelačić Square, was one of the quietest markets I had visited. It was eerie. There were no people shopping. The vendors were quietly sitting by, not trying to stir up business from an non existent crowd. Granted, it was an open air market which made the market seem larger than it was. Beyond the fruits and vegetables that you typically find at a market, I spotted these cute wooden items. I wanted to get one of those miniature brooms purely because of the cute factor! We ultimately ended up at the the Zagreb Cathedral (also known as the Cathedral of the Assumption of the Virgin Mary). Its two spires, each looming at over 300 feet tall, can be seen from all parts of the city. The cathedral houses an 800 year old treasury and a sarcophagus of the controversial 20th-century Croat Cardinal Alojzije Stepinac, who publicly condemned the Yugoslav government and its actions during World War II. He was put on “trial”, found guilty and was incarcerated until his death. Like many other cathedrals around Europe, one of the top spire was under construction, so it was hard to truly appreciate the size and masterpiece that it is. One thing that never ceases to amaze me though, is the intricate detailing on the building. Just look at this arch right over the entryway. Beautiful. Finally we were able to locate the restaurant and I had the most amazing mushroom risotto. I was starving and was too excited to eat that I don’t have a photo. Just trust me when I say it was amazing.

After lunch, we did a bit more wandering of the city by heading up to the Upper Town. Zagreb’s centre is broken up into two parts: Gornji grad, Upper Town, and Donji grad, Lower Town. The Upper Town, the medieval centre, is further broken down into two sections: Kaptol, the seat of the Bishop (where the Cathedral is located), and Gradec, the free town where tradesmen and artisans lived. We passed through a gate where there were plaques and a Virgin Mary on display. There were people lighting candles and praying, but at the time I had no idea what it was and it seemed very random to be there. After doing some research, I’ve found out its called Kamenita Vrata (the Stone Gate), which was one of the four entrances to Gradec:

“In 1731, after a devastating fire had consumed the surrounding wooden buildings, a painting of the Virgin Mary was found in the ashes, remarkably undamaged. Kamenita Vrata was reconstructed and became regarded as a place of miracles. Today locals come here to pray and pay tribute to the Virgin: there’s a delightful shrine adorned with flickering candles and the walls are hung with small plaques saying Hvala (thank you)” (tripwolf.com) The main square of Gradec is focused around St. Mark’s Cathedral. I love the details in the roof of the church and the colours made it stand out against the surrounding buildings and sky.

The rest of our time in Zagreb was spent wandering aimlessly. We took in the view of the Lower Town from above… 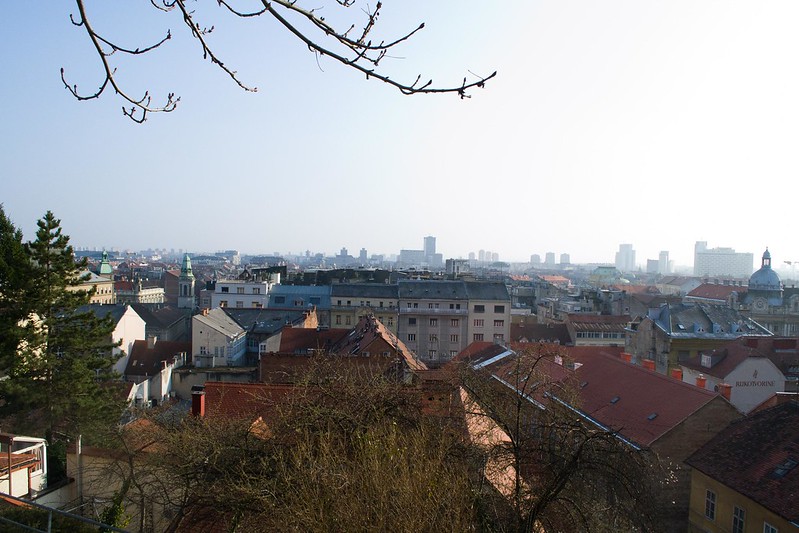 …visited a statue of the famous Nikola Tesla (if you do one thing today, click on this link – your mind will be blown)… …got in tune with nature… …and hugged the sun. What I originally thought was just a random piece of art, is actual a part of a much bigger piece that is spread around the city. This is the sun, in the solar system that is spread out across the city. There is no plaque or any sign explaining what it was and as a result there is a lot of graffiti and writing on it. I would have loved more time to find the rest of the solar system.

Zagreb is a small capital city. In many ways it looks very generic with many similarities to other European capitals. The buildings were very well maintained and had many intricate details. The whole city was quiet! In our wanders, the streets were so empty. While a lot of people could speak English, there weren’t that many tourists around (granted, we were there in mid March during off season), which was a nice change from the rest of Europe.

Many people skip Zagreb when they travel to Croatia, instead opting to go to the seaside. I can understand why, especially if you’ve been to other cities in Europe, Zagreb can be underwhelming. That said, it is still a beautiful city, worth a day or two’s exploration. I wish I had gone to the Museum of Broken Relationships – everyone recommends it! Next time. Visiting Zagreb is a great way to escape the tourists and have some peace and quiet while you wander around.