You are here: Home / Festivals / Maximize Your Good Fortune With These Chinese New Year Traditions
Some posts on this site contain affiliate links, meaning if you book or buy something through one of these links, I may earn a small commission (at no extra cost to you!). You can read my full disclosure policy here.

Happy Chinese New Year! This festive season is a fun time in my family. I have such fond memories of all the good food, candy, traditions and most of all the red pocket! It was like Christmas and one of my favourite holidays growing up. Even though we were in Canada, my grandmother makes sure we were following traditions to a tee. Traditionally, celebrations last for 15 days with specific activities and rituals for each day of the new year. However, in our family the days leading up to and the first few days of the new year are the most important.

This year, the Lunar New Year falls on February 19, ushering in the Year of the Sheep (or Goat or Ram depending on your preference). Even though China adopted the Gregorian calendar in 1912, many of its holidays still follow the Chinese or Lunar Calendar. The new year typically falls on the second new moon after the winter solstice meaning this holiday typically occurs in late January and early February. In my house, it’s quite normal to have calendar with both Western and Chinese dates printed on them so that we know where we are in the year according to both calendars.

The calendar that hangs in our kitchen.

Much of the reasoning behind the traditions have been lost to time. Every family will have a different reason for doing each thing. When explaining some of these traditions to my non-Chinese friends, everyone thinks I’m crazy, which in fairness, when you look at it objectively, many of these things are quite silly. Behaviours specifically to encourage good luck and prosperity.

Regardless of whether or not you believe in them, these things are a part of my upbringing and a way of life in my family when it comes time for the new year. While I don’t necessarily believe in it, I think they’re kind of fun! So here they are, the funny traditions that my family keeps from year to year:

Think of this as the Chinese version of spring cleaning except it doesn’t happen in spring. I remember as a kid, my mom would always nag me to clean my room in the days leading up to Chinese New Year and that no, shoving everything into the closet didn’t help. Everything need a thorough scrub down. Why? Because the cleaning process rids your house of any bad fortune from the past year and makes room for good fortune to come in. There also can’t be any cleaning during the new year either because then you may be throwing away your good fortune along with the trash.

Our garbage day in my neighborhood is on a Thursday and this year’s Chinese New Year falls on a Thursday. You bet we won’t be putting out garbage that day. I threw out as much as I could last week.

This was one I struggled with as a kid and I mostly ignore it. The thinking goes that during the first day of the new year you’re not supposed to wash your hair because you can wash your good luck away.

Growing up, I danced a lot and January and February (usually when Chinese New Year happened), was right in the middle of competition season. That meant a lot of rehearsals and performances and all sorts of gel, hairspray and gunk being in my hair. I don’t care about washing away my luck. All that stuff needs to get out my hair!

Getting a hair cut

Yes, another tradition to do with my hair. It was important to start the year with a new hair cut. Sharp objects like knives and scissors were to be avoided during the beginning of the new year as you can cut away your good luck (noticing a trend yet?).

Leading up to Chinese New Year 2012 when I was living in Budapest a friend of mine cut my hair. Pot for demonstrative purposes only. Sleepiness all me.

Every year when Chinese new year rolls around, I have this overwhelming urge to get my hair cut. It’s ingrained in me almost. Due to poor planning, I didn’t get a chance to do it this year. Hopefully that doesn’t ruin my chances at good luck!

Wearing something new and ideally red

New clothing represents the idea of having an abundance of things. You have enough so that you can afford to wear something new for the new year. The colour red is preferred because it is a bright colour and is said to bring prosperity and good luck which is why you see it everywhere during the holidays. Red also is said to scare away bad spirits, only keeping the good.

This was definitely one of my favourite traditions growing up. What girl needs an excuse to go shopping right?

Pay off all debts

This tradition has only come to light in recent years for me as I’ve headed into the work force and actually had money to lend or owed others. The belief is that if you start the year off owing people money, then it is likely you’ll end the year in debt as well. The same idea with lending money. By starting the year off lending money to others, it’s believed that you’ll be doing the same the rest of the year. I’m not sure how this works with bigger debts like mortgages and loans and what not.

As mentioned above, the colour red symbolizes good luck. Houses get adorn with red lanterns, red banners and various other red decorations. Banners with popular sayings for good luck and fortune for the new year are put up around the house. They offer wishes for good health, peace, safety and if you’re a child for growth and a studious year. 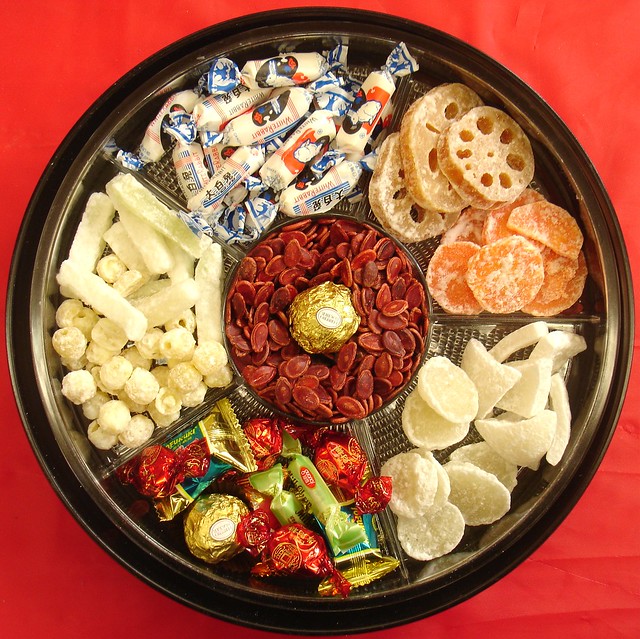 What a typical tray would look like. Those white rabbit candies are classic! Photo: Tina

The best part of the decorating process is putting out the Tray of Togetherness which is filled with various candies and treats. This tray is offered to family and friends who visit during this festive season. Traditionally, these trays have 8 sections and are filled with Chinese candy treats which may not necessarily seem like candy to those growing up with a western palette. Our trays were often filled with weird things like unusual dried fruit, strange seeds, and nuts. Mixed in were less traditional items like chocolate coins and chewy candy. As a kid, having easy access to all this candy was heaven!

So there you have it. Some of the crazy and weird traditions that are upheld in my household during the lunar new year. One day I’d love to see the celebrations in Asia, but until then, you’ll find me hovering over the tray of candies.

Does all this seem crazy to you? Have you experienced a lunar new year in Asia?

« An Anti-Love Story: What Happens When You Fall in Love Abroad
7 Free Things to Do in Hong Kong »