You are here: Home / Destinations / Asia / The Best Part of Chinese New Year – the Food
Some posts on this site contain affiliate links, meaning if you book or buy something through one of these links, I may earn a small commission (at no extra cost to you!). You can read my full disclosure policy here.

Happy Lunar New Year! The best part of Chinese New Year for me is, of course, the food! There are so many delicious foods and treats to be had during this festive holiday. From multi-course elaborate meals to candy and savoury snacks to dim sum meals with family, there is a lot of good stuff being shared and eaten. The Chinese are a superstitious group and this is reflected in the foods eaten at this time. There are certain foods that are eaten during the holidays which are said to bring good luck and prosperity in the new year. Plus, they all taste delicious, so why not?

Here is a video from my Snapchat (username: packmeto) introducing some of the snacks that you typically find:

During the 15 day festival, there are a number of meals where family come together to eat. In my family, it is our tradition to have a meal on Chinese New Year Eve with my immediate family, and sometimes with my father’s side of the family. On day 2 of the new year, we have a meal with my mother’s side of the family. I love Chinese New Year food so much that one year my flatmate and I attempted to cook a massive new year dinner while living in Budapest for 26 people! We were crazy or what?! Here are a few of the must have dishes gracing the table.

Traditionally, on the first day of the new year many people, especially Buddhist, do not eat meat. While in my family, we don’t strictly follow this, we often try to have a few vegetarian items such as stir fried bean curd, radish cakes, daikon cakes, vegetarian noodles and dumplings. 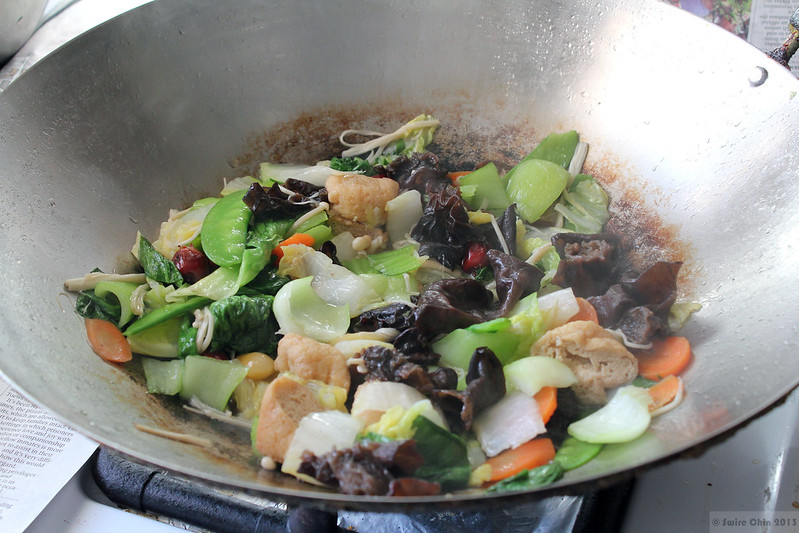 Another option is to serve Buddha’s Delight (羅漢齋) which is made up of a variety of vegetarian foods including a seaweed-like vegetable called fat choy (髮菜). When cooked, it looks a bit like hair, but because its name sounds similar to words that mean to “strike it rich,” it is an auspicious food to eat during the new year.

Noodles are a symbol for life. The longer the noodles, the longer your life. This is why you should never cut your noodles. Noodles are also served for birthday feasts as well for the same reason.

A little bit non-traditional, but my family always goes to the local butcher for some roasted and barbeque meats. These aren’t necessarily Chinese new year foods, but they always make an appearance on our table for special occasions. Typically we will get barbequed pork (char siu 叉燒), roasted pork (siu yuk 燒肉), and roasted duck. 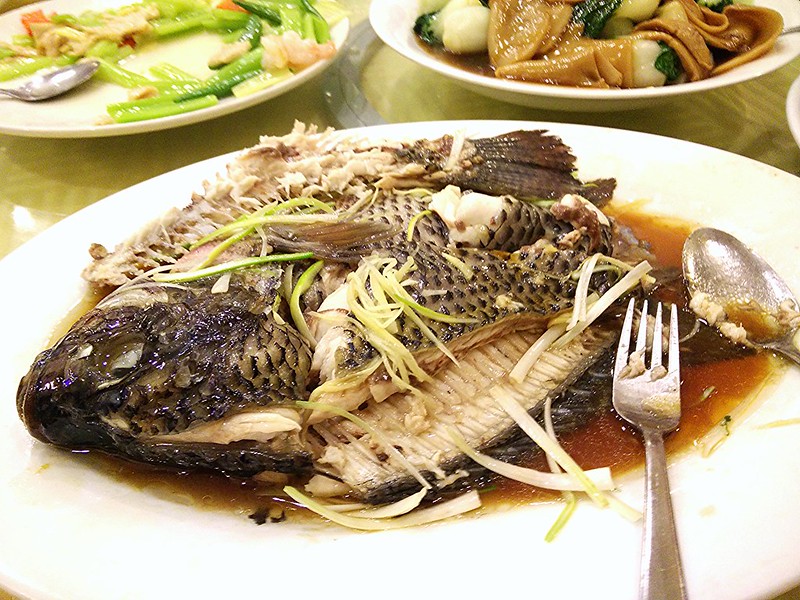 There is a common Chinese saying “年年有餘” which means every year you have surplus and abundance. The last character (餘yú), sounds like the Chinese word for fish (魚yú) which is why fish is a common dish to have during the Chinese new year. It is also important to keep the fish intact with a head and a tail when served which symbolizes good fortune the whole year from start (head) to end (tail). It is common to serve fish on new year’s eve, but not eat all of it, so that you have some crossing over into the new year. 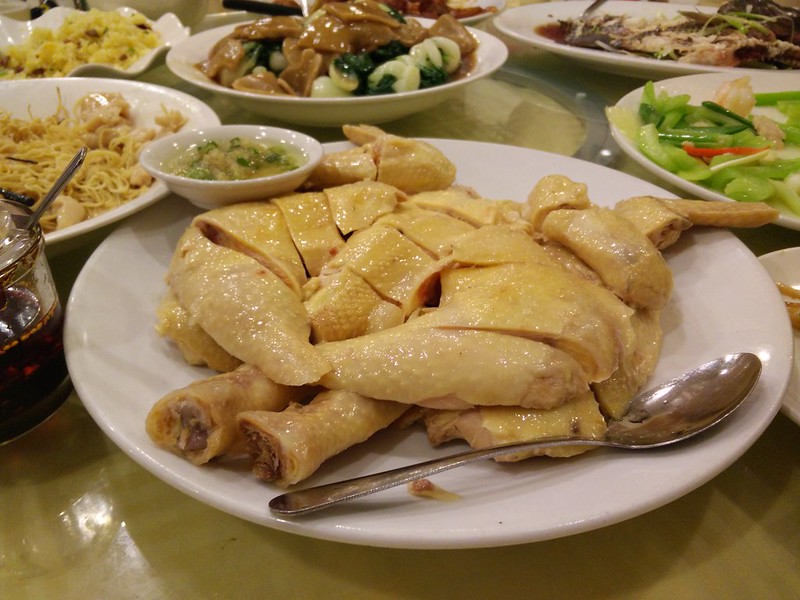 Like fish, a chicken is also served whole. In my family, we normally have a salted chicken, but there are a variety of ways to prepare it. The important part is to ensure that it is a whole chicken. The chicken represents togetherness and bringing together the family.

Some of my favourite foods during this time come in the form of snacks and junk food. They’re nothing like the western sense of the word, though.

This was my favorite thing growing up as a child. What child wouldn’t be mesmerized by a tray filled with candy all for my taking without any limit? I’m sold! Traditionally, these trays have 8 sections and are typically filled with Chinese candy treats such as candied fruit, dried coconut, and red watermelon seeds. The Chinese candies are nothing like the western concept of candy and they’re not very sweet. To modernize this, my family cuts down on the Chinese treats and add in gold chocolate coins, chewy White Rabbit candies and Starburst like candy called Sugus.

While not like a cake in the Western sense, nian gao is a must have during the new year. It is made from glutinous rice flour. It is eaten during this holiday because it is believed that it will bring you good luck as “nian gao” in Chinese sounds like “higher year” which implies prosperity year after year.

They come often adorned with the character for prosperity (福) as seen in my example above. Sometimes they take on other auspicious shapes. I remember receiving nian gao in the shape of fish before which is another symbol of Chinese New Year. To eat this, I normally slice it up, dip it into some egg and then fry it. What results is a sticky, slightly sweet, slightly salty delicious treat. So good!

Oranges are passed around throughout Chinese New Year. If you go visit someone during this time, you go with a bag of oranges, and as silly as it sounds, leave with a bag of different oranges. They’re also often on display. Why? It’s because the Chinese words for oranges and tangerines sound similar to the words for luck and gold respectively.

When the branches are still attached they also mean fertility. My mother likes to put some on top of our tray of togetherness.

Literally meaning oil dumpling, these are a crunchy snack filled with peanuts, coconut flakes, sesame seeds, and sugar. It is a little bit savory and a little bit sweet. Biting into one of these is sure to create a mess as the filling can get everywhere!

Essentially it is a dumpling that has been deep fried. Check out these photos to see how they’re made.

Nothing is better than a freshly fried sesame ball especially during Chinese new year. These golden balls are made from glutinous rice flour, fried and filled with red bean paste. The dough itself is crispy on the outside and soft and chewy inside.

When I was younger, I learned a Chinese rhyme which when translated literally says “sesame balls rolling around, filling the house with gold.” I’m pretty sad that I’m missing this year’s batch of sesame balls from my grandma this year.

There are so many delicious things to enjoy during Chinese New Year and these are only some of my favorites.

Have you celebrated the lunar new year?