You are here: Home / Destinations / Chania – A Stunning Discovery on the Island of Crete
Some posts on this site contain affiliate links, meaning if you book or buy something through one of these links, I may earn a small commission (at no extra cost to you!). You can read my full disclosure policy here.

When I was doing research on where to go on the island of Crete, there wasn’t too much information out there and what I did find was very sparse and not informative. This was the first trip my boyfriend and I went on and you know as the saying goes: traveling with your significant other is always a test of a relationship. Of course I wanted it to be perfect (spoiler alert: it wasn’t, but because of too packed an itinerary, not fighting so yay). It was with sense of trepidation that we set off from the village of Panormo, where we were staying, to explore Chania.

I’m so glad we decided to make our way to this town, despite not really knowing what we were getting ourselves into. I was so completely blown away by its stunning beauty. Chania (sometimes spelled Hania) is famous for its old town and Venetian harbour, both of which did not disappoint. 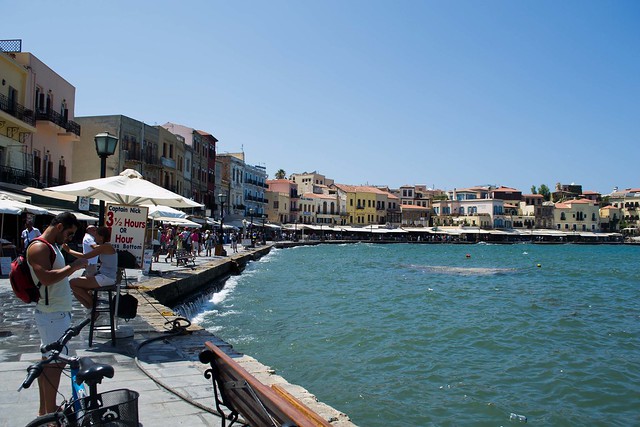 The harbour was built during the Venetian period between 1320 and 1356. Facing out from the harbour is the imposing lighthouse and breakwater. There is a Turkish mosque located on one side of the harbour and on the other side is the Firkas Fortress. The fourth side of the harbour is lined with tourist shops and restaurants, while rather generic, provided a fantastic view for lunch. 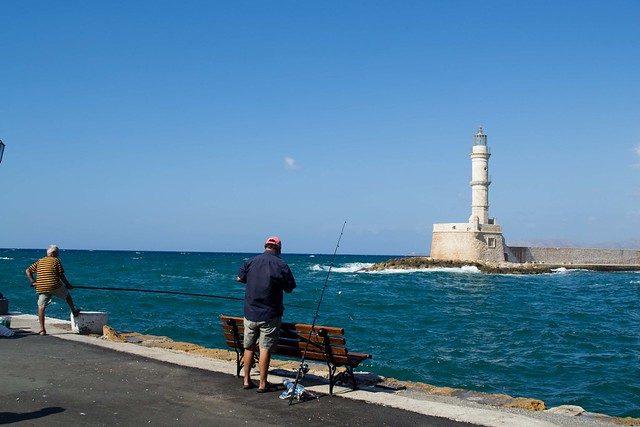 The famous lighthouse and breakwater. Fishing anyone?

As we walked to the old city, we somehow picked up a stray dog. He started following us around. It was rather unnerving. This was just the start of the trip so I wasn’t as accustomed to all the stray animals in Greece – especially all the cats! Through our trip and especially on the island, cats were everywhere. Often they would come up to you at a restaurant and beg you for food. At first I was rather wary and uncomfortable with their presence, but eventually I got accustomed to it and just ignored them.

Seriously?? Are you kidding me?!

Our first order of business was to find something to eat. With plenty of restaurants to choose from along the harbour front (probably most of which were tourist trap type places), we picked one that had a friendly waiter who didn’t push us and plenty of people seated out front. The view as we dined was fabulous. I stupidly ordered lamb – I’m on an island, I should have ordered fish – but it was still melt in your mouth delicious. We were offered complementary raki (a strong spirit), drinks (didn’t taste that great) and a small dessert (yum!). I was amazed at the hospitality of the waiter and restaurant in general. Meanwhile, I couldn’t take my eyes off the beautiful harbour in front of us.

I wish I had this view for every meal.

The waves and water were so violent and would regularly come up above the path that goes around the harbour. Some of the restaurants and bars that lined the harbour on the western side were flooding, with the water levels following the ebb and flow of the waves. 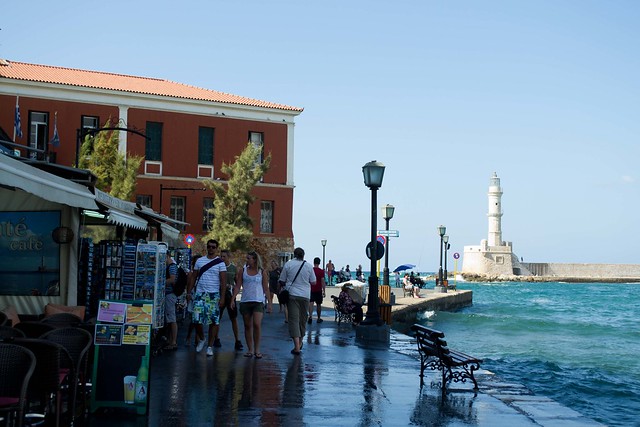 Don’t sit on that bench. You’re just asking to get soaked.

The waves were massive against what would be the equivalent of the Vancouver seawall. With no other islands to break up the waves, they crashed heavily into the concrete. There were some rocks and boulders stretching out about 10 meters to break up the water, but they didn’t do much to deter the big waves. The kids running around were having a blast chasing the waves and getting soaked. 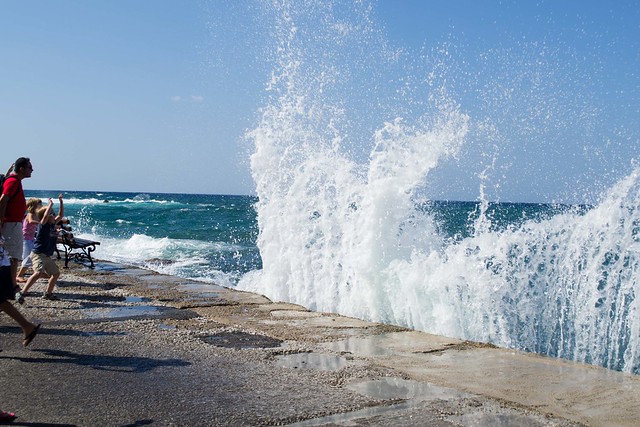 I love that kid on the left. He was so excited!

While wandering the street that was right along the water, we had to be careful of oncoming waves. It was inevitable though and only a matter of time before we got completely drenched. With the warm sun and air, we were dry in no time. 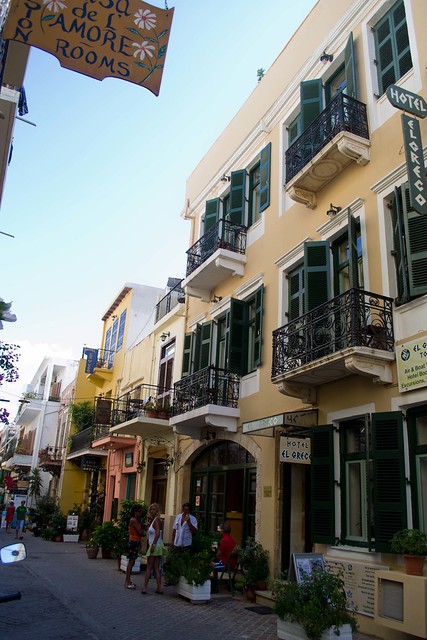 The old town itself was a tangled web of narrow streets and passage ways, some overfilling with tourists and locals, others were completely void of a single soul. 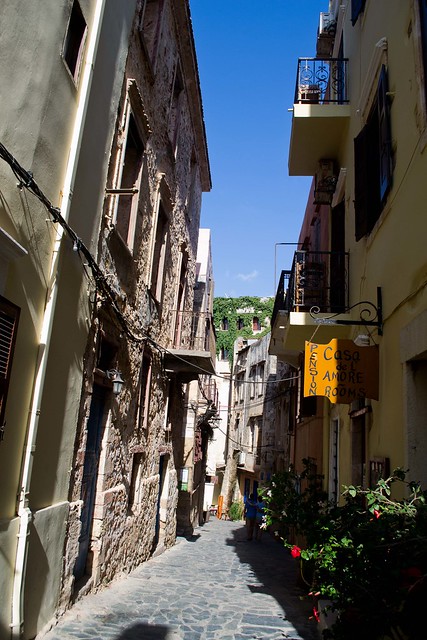 Scrambling up and down the pathways of the city, I was reminded of Italy and in many ways, these streets did look and feel like we were lost in a Tuscan village. I especially loved the various balconies on all the buildings. 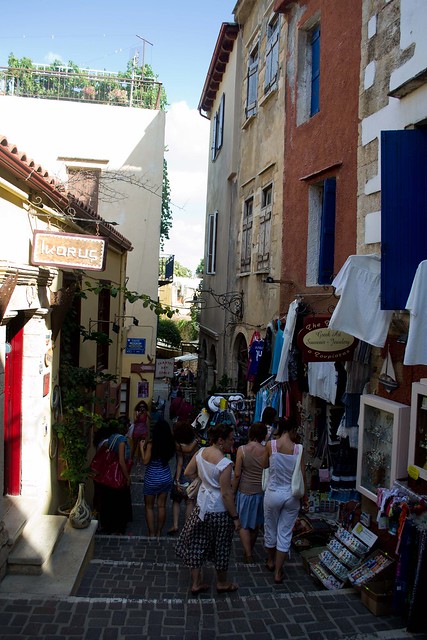 The day was hot, almost stifling at times. Going to Greece in the middle of summer is a BAD idea, especially if you’re like me and hate the heat. The streets of Chania were perfectly lined up with the wind coming off the ocean and the refreshing breeze was wonderful. 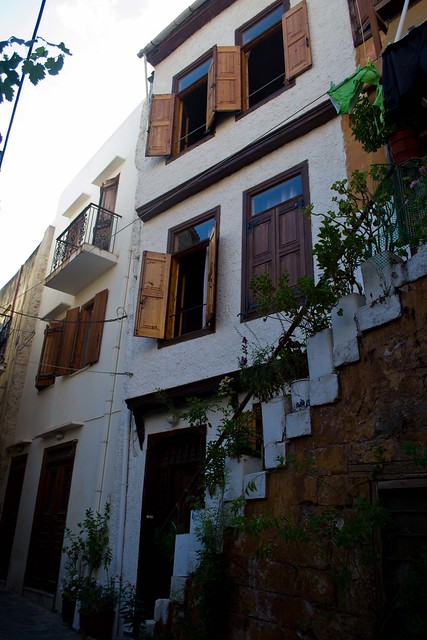 We wandered the city with no destination in mind, just exploring on foot. It’s a good thing we weren’t looking for anything in particular. Greek is just impossible! And I thought Hungarian was hard enough, but at least that uses the same alphabet. For the most part, street signs had Roman letters on it, like the sign in the below picture, but it was rather confusing to look and not be able to read anything. 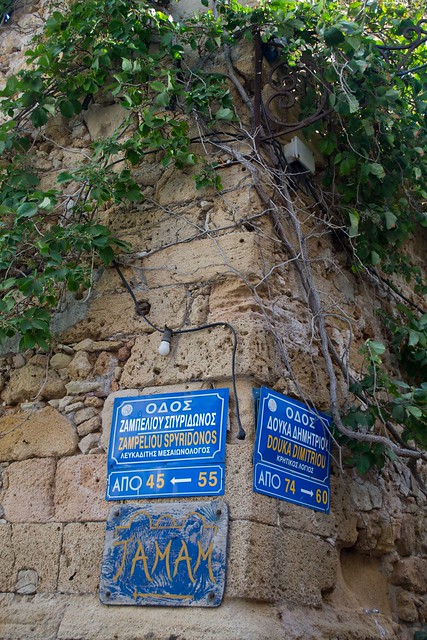 Of all the places I visited in Greece, Chania was my favourite of them all which is why I had to share about it first. The winding streets of the old city and the gorgeous Venetian harbour charmed its ways into my heart. If I were to go back, this would be at the top of my list. I wish we had decided to stay in this town. I didn’t want to leave it! If you ever get a chance to go to a Greek Island, I’d definitely recommend you go to Crete and visit this gorgeous city.

Has a town unexpectedly and completely blown you away? Tell me about it!

« A Strange Night Out in Metelkova, Slovenia
Starting Off on the Wrong Foot in Greece »