You are here: Home / Destinations / Now and Then: The Evolution of the East Side Gallery in Berlin
Some posts on this site contain affiliate links, meaning if you book or buy something through one of these links, I may earn a small commission (at no extra cost to you!). You can read my full disclosure policy here.

While in Berlin, I managed to reconnect with a number of my friends from my time living in Budapest. For one of them, it was her first time in Berlin and one of her “must do” activities was to visit the East Side Gallery. I was eager to see it again since I really enjoyed walking along the gallery and seeing all the murals on my first visit to Berlin in 2011. This time around, however, it was a completely different experience.

The East Side Gallery is an open-air gallery of over a 100 paintings by artists from 21 different countries painted after the fall of the Berlin Wall in 1989. Running 1.3 KM along the banks of the Spree river, the gallery was painted on an outer section of the Berlin Wall. Many of the murals are painted with commentary on politics and current events of the time, but others are a celebration of freedom and hope for the future. It is interesting to see how each artist chose their own way to express themselves on the bit of wall they were given.

For the most part, much of the wall and the murals remained the same. I saw a bunch of my favourite murals. 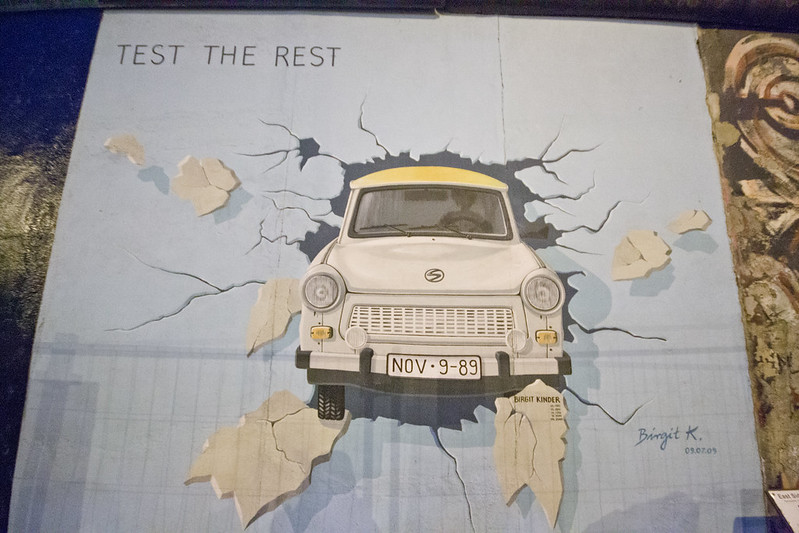 The Trabant Car – ever a symbol of East Germany

However, the biggest difference and obstacle to my enjoyment was that most of the gallery was set behind huge metal fences. 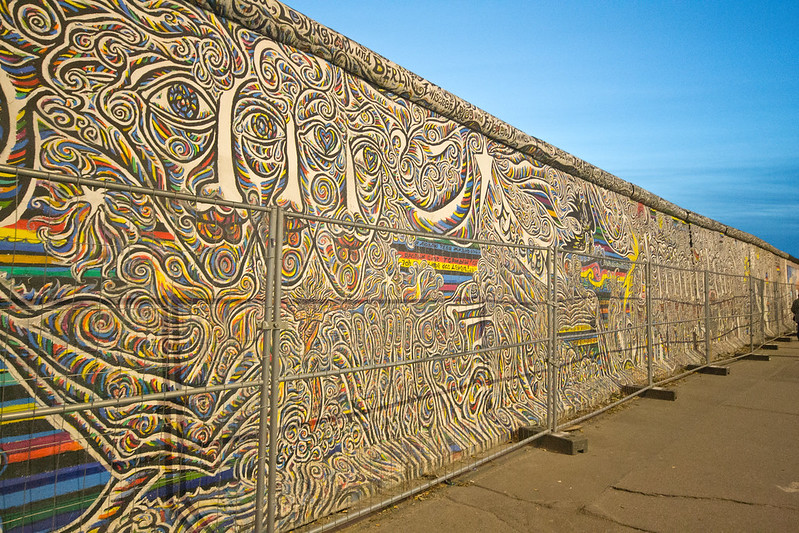 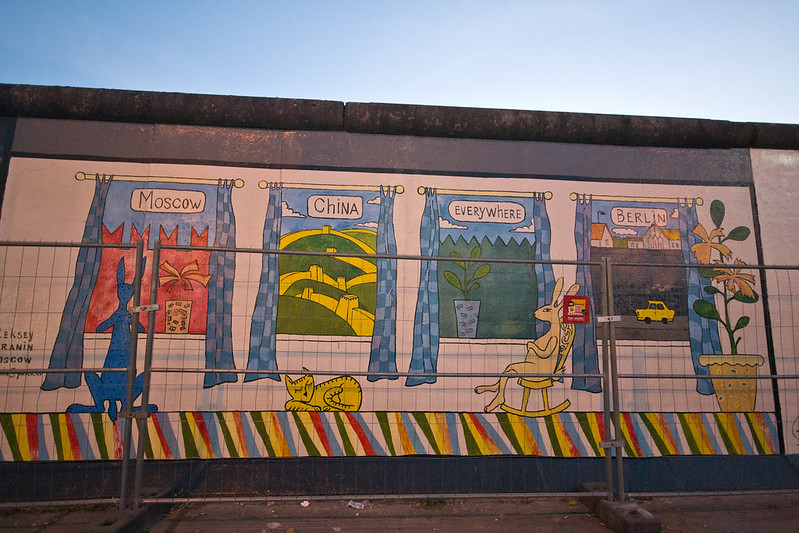 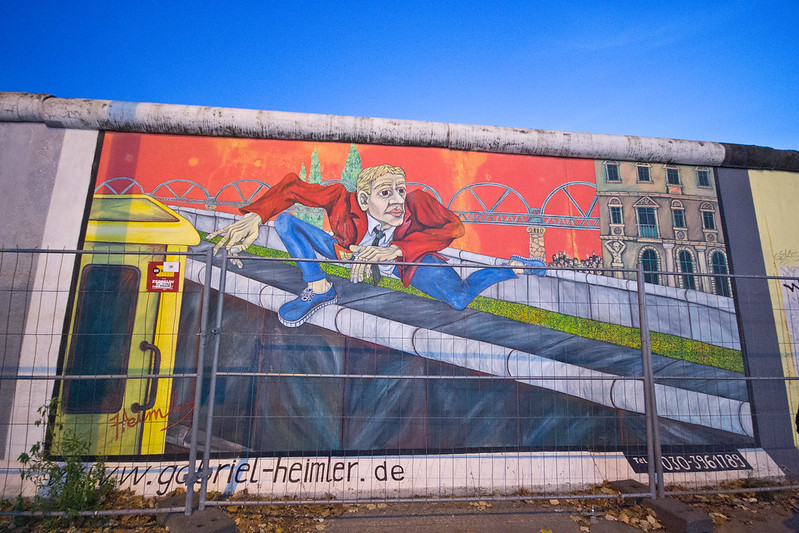 The parts that weren’t covered up were filled with graffiti and other forms of vandalism. 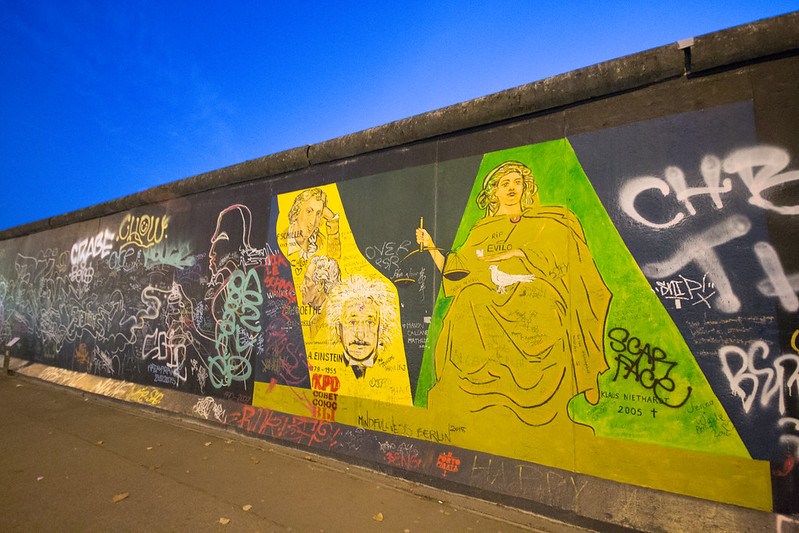 On my first visit, there were some tags and scribbles on the Wall, mostly in open spaces, but for the most part the murals were left untouched and you could clearly see what was painted on them. 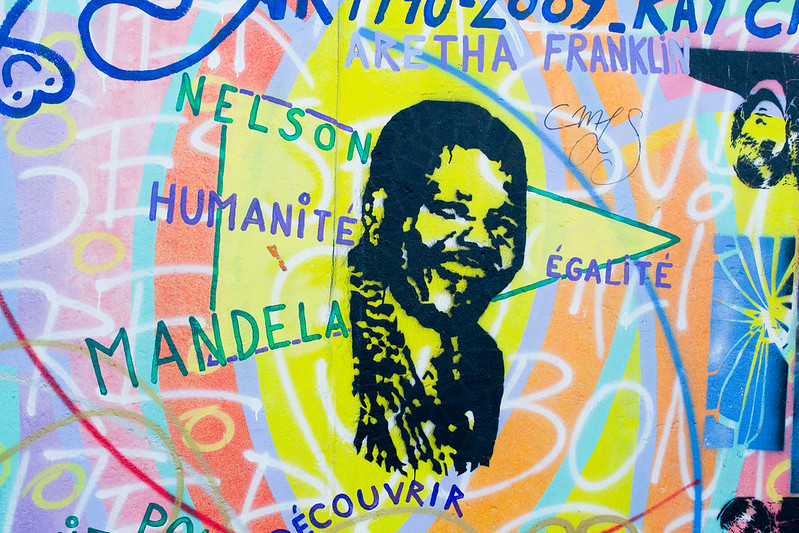 I was so disappointed and upset to see all the graffiti this time around. I wasn’t expecting it to be in that bad condition. I don’t understand how people have so little respect for the works of these artists, not to mention the significance of these Walls. Of what they represented for years for so many people in the past and what they stand to remind us of today. 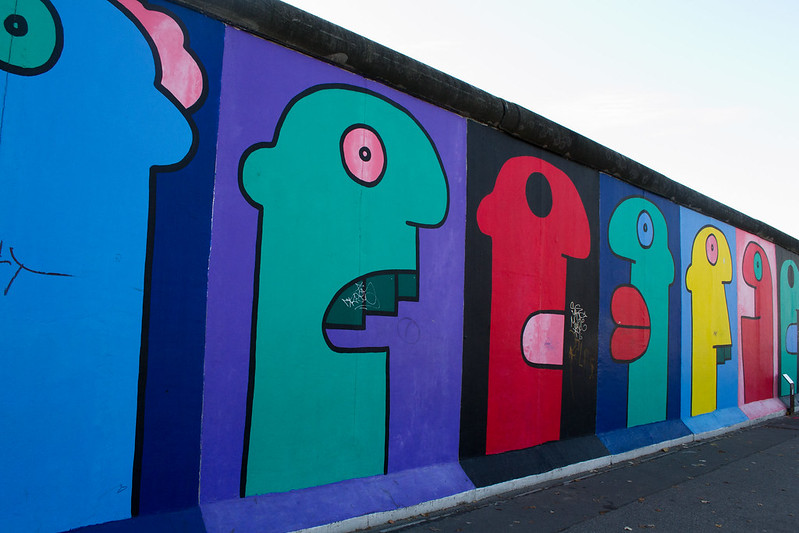 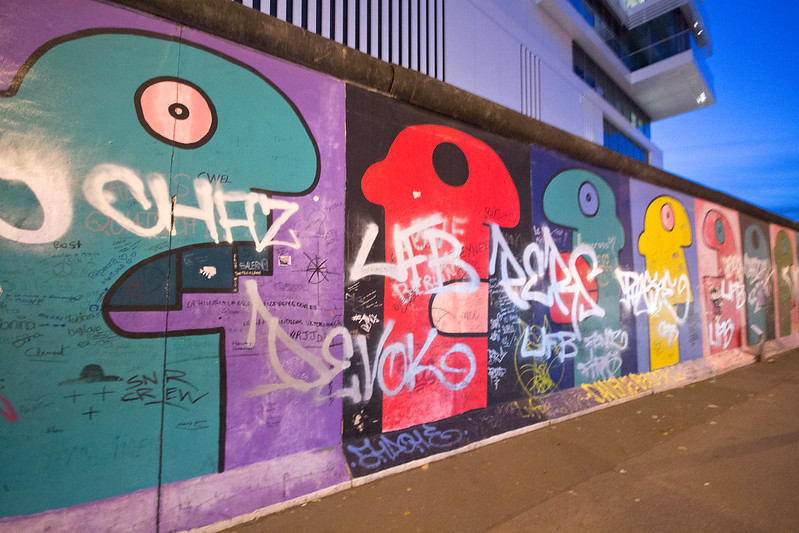 That same mural in 2016. There’s also an addition of a building behind the wall. 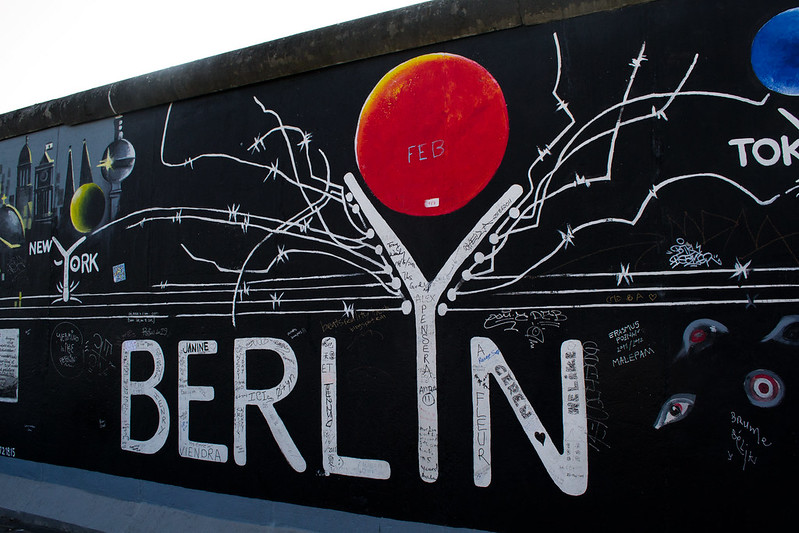 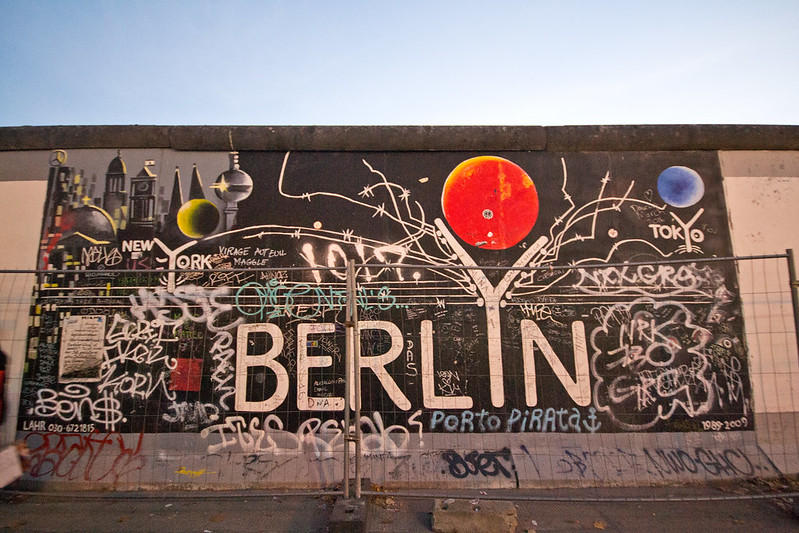 It was clear that some parts of the Wall had been recently cleaned – especially when you compare my photos to images captured by these bloggers in 2014 and 2015. 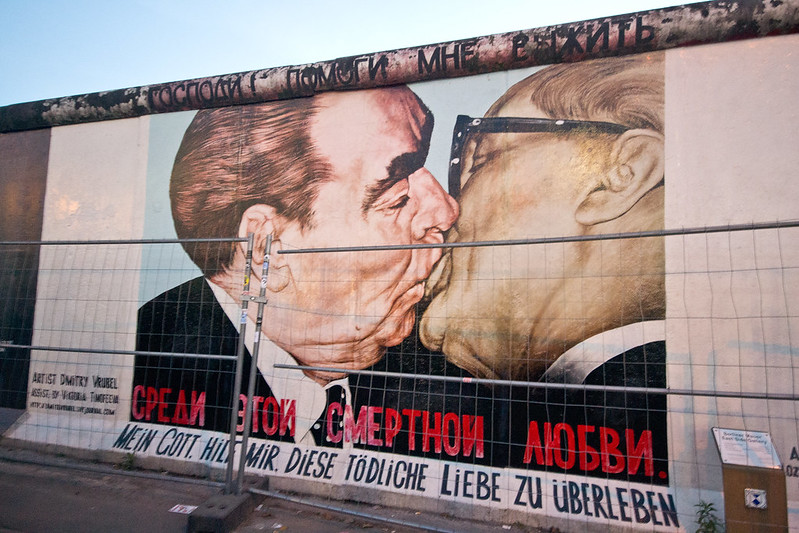 The Fraternal Kiss had clearly been cleaned up based on photos from others. 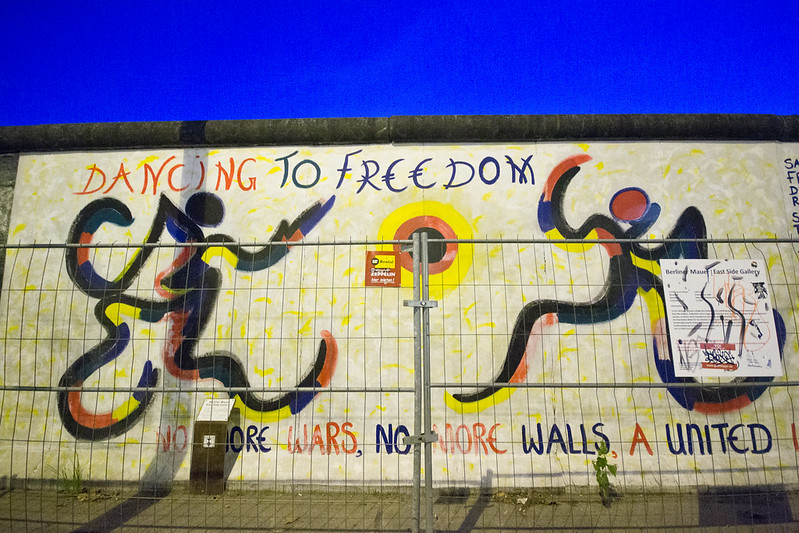 This one had a huge black mark removed compared to the image in 2015.

Following my visit, I did some research and turns out the Wall and the gallery had undergone renovations in 2009 so it was still in very good shape when I visited in 2011. Now five years later, with thousands of tourists visiting the location every day, it makes sense that there is so much more destruction unfortunately. 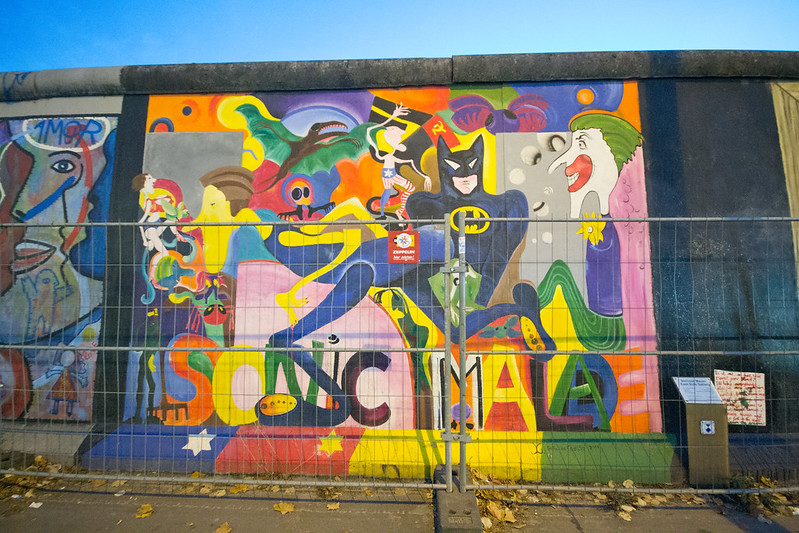 Maybe Bruce Wayne will swoop in to save the day

There is talk of developing a more permanent solution to protecting the murals from the weather and from vandalism. Such an undertaking will likely involve a lot of money and the right people pushing the project ahead. Time will tell exactly what they come up with and whether or not it is a sustainable solution to preserving such an important part of history in Berlin and the world.

Have you gone back to a place to find it completely different? Do you have any solutions for the Gallery?

« 7 Free Things To Do in Berlin
A Day in Leipzig: History, Bach, and Cake »