You are here: Home / Destinations / Behind the Scenes at America’s Got Talent
Some posts on this site contain affiliate links, meaning if you book or buy something through one of these links, I may earn a small commission (at no extra cost to you!). You can read my full disclosure policy here.

About a year ago this time, I was getting ready to go to New York City with my brother. When people find out I went to New York, they ask if I went to see any Broadway shows. I opted to not go to any this trip and focus on other things in the city. But then I slip in that I ended up going to see a live taping of America’s Got Talent. They were filming the first of their semi finals that week and seemed like a great way to spend an evening. 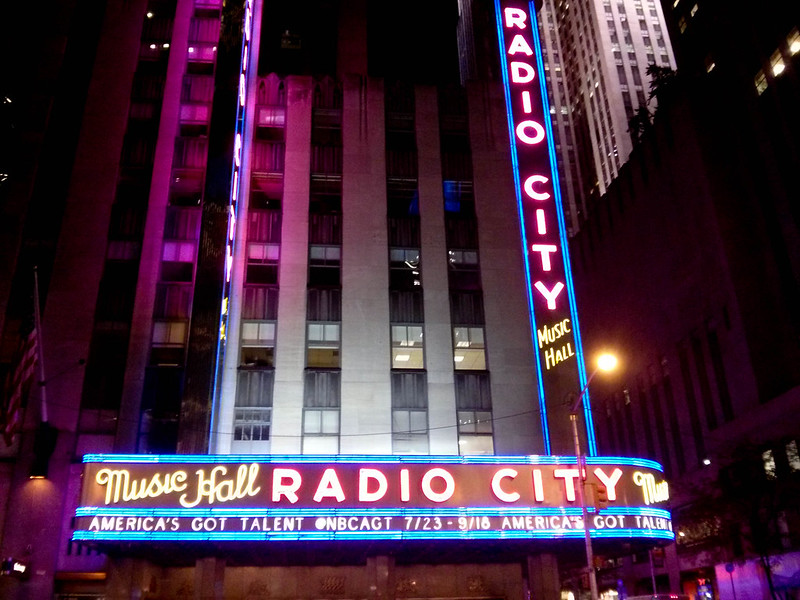 Getting to go inside Radio City Music Hall! Super cool.

For as long as I can remember, I’ve wanted to go and see a filming of a TV show, whether it be a reality show, talk show or something else. As long as it’s on TV. I still have high hopes I’ll get to go see Ellen one day too! There is something so mysterious about what goes into making a TV show. The average person has no idea what goes into making everything run so smoothly, especially when it is live.

We had been watching the show together with my parents so I was really looking forward to getting a behind the scenes glimpse into the magic. I had to get tickets!

Unfortunately, by the time I realized we could sign up for tickets, everything was taken for the day that we wanted, but there was one option to sign up for the wait list. I did that, without really thinking that we’d be able to get tickets. About a week before the filming date, I received an email saying that tickets had become available and I can now select a time for ticket pick up. Hurray! 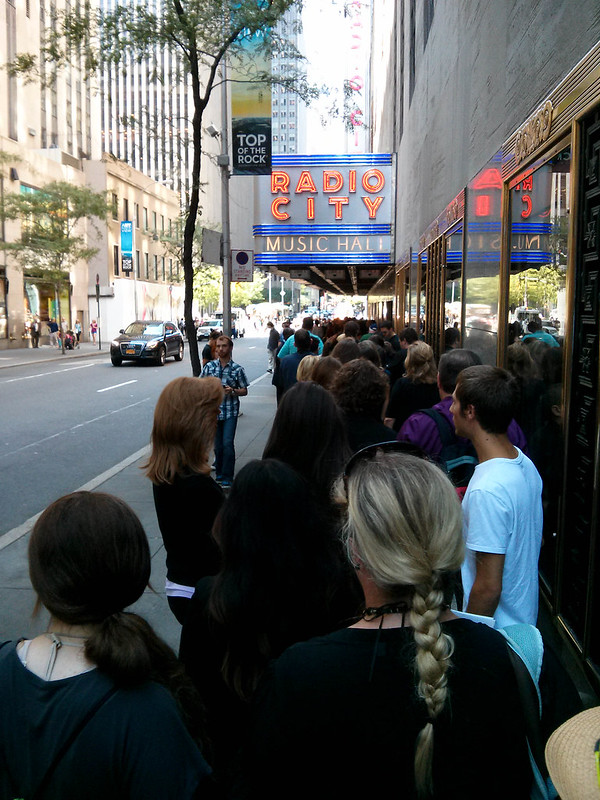 Such a long line down the block

When you sign up for tickets, you sign up for a time slot to pick up your tickets. The day of, I lined up outside Radio City Music Hall at my assigned time. There were so many people! Despite the theatre being able to seat ___ people, I was definitely concerned about how many they would have available. The line moved quickly and before I knew it, I had picked up my tickets. You don’t get a choice in where you get to sit. It’s just luck of the draw and for us, we were bit unlucky. We were put in the balcony. 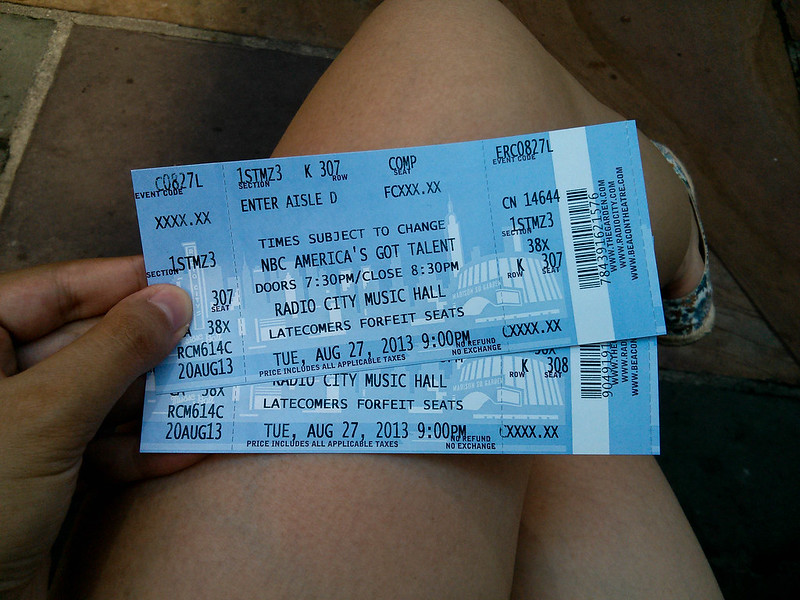 We were told to return to Radio City by 7:30, despite the show not starting until 9. I found out the reason why later.

When it was time, we headed to the doors and joined a quick moving line to get inside. We were pointed the right direction and before long we found our seats in the balcony. 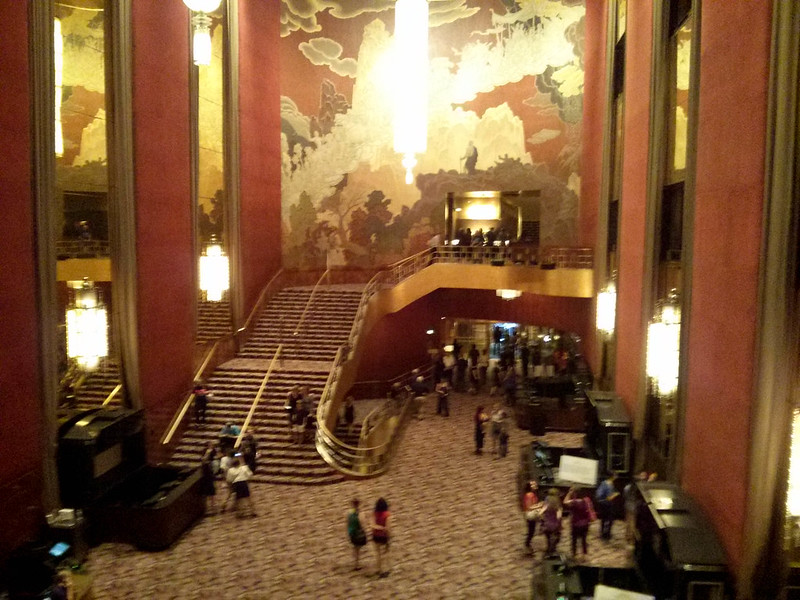 A blurry shot of the foyer of Radio City Music Hall

They were fairly quick to start with everything running on time. There is a guy that comes out and hypes out the crowd. He tells jokes and gets the crowd ready for the show. He tells us what to do and when to do it. He stood on the corner of the stage and waved his arms to signal when to clap and interact with the judges. At the beginning of the night, the energy was infectious. Everyone was so enthusiastic and energetic. 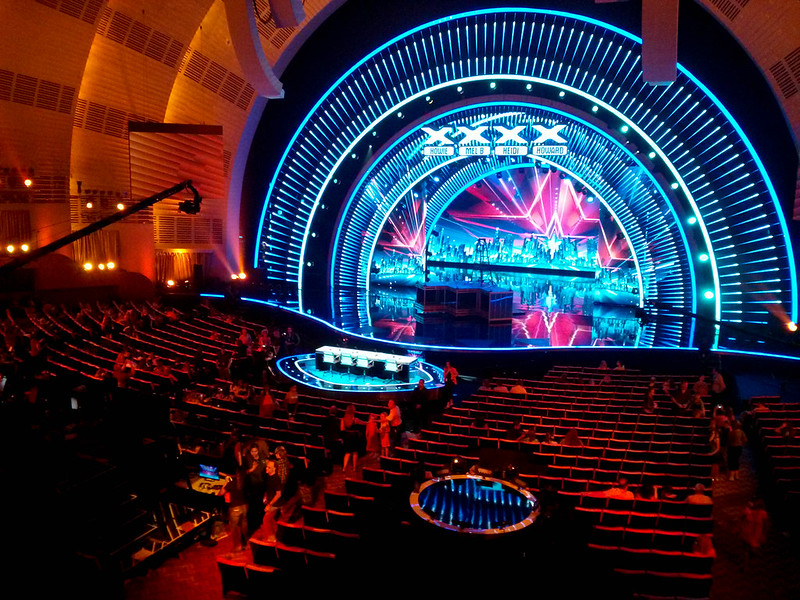 The view from the front of the balcony. We were seated much further back.

The reason for the early call back was so that they could film one act and the opening before the show. After seeing the whole show, I understand why they had to pre-film the intro and the 2nd act of the night. Because of the sequence of the acts and what was required to be built on the stage, the commercial break isn’t long enough to fully change the stage.

However, not everyone returned on time. While we were seated in the balcony, someone from the show came around to ask if anyone wanted to be fillers. To sit in the empty seats closest to the judges so that the theatre looks full when the camera pans around. I snapped at the chance, and off we went. 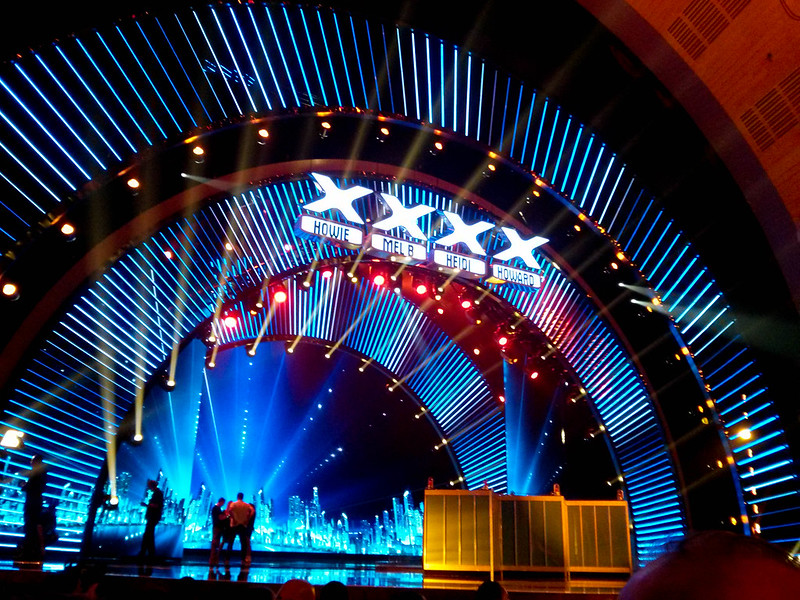 It was a completely different experience on the ground flour. The judges were right there and we were so close to the stage. I didn’t bring my actual camera for fear of them confiscating them so I resorted to blurry pictures of them. We watched the act and filmed the opening sequence before getting kicked out of our seats. 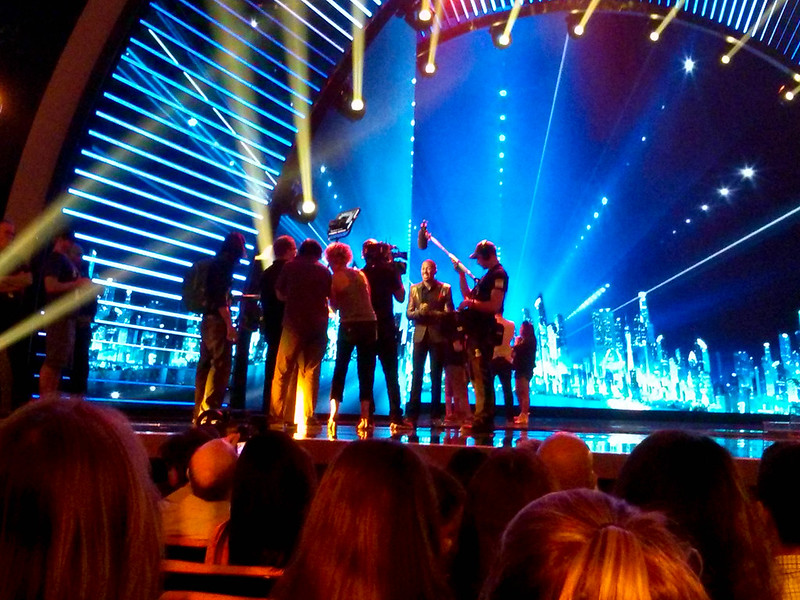 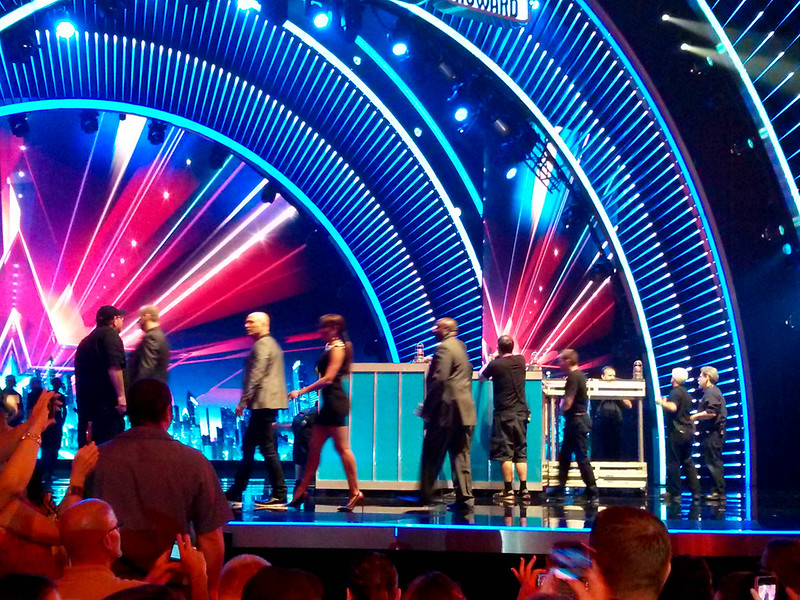 I spy with my little eye, two judges on the panel. Do you? Howie Mandel and Mel B are in the middle there.

Back to the balcony we went.

Sitting on the balcony felt like you were removed from all the action and we weren’t able to engage as much. They would as for a standing ovation, but in the back of the balcony it doesn’t really matter considering they can’t even see us on the camera. There are less people so you don’t get the whole mob feeling of being in a big crowd of people enjoying a show. 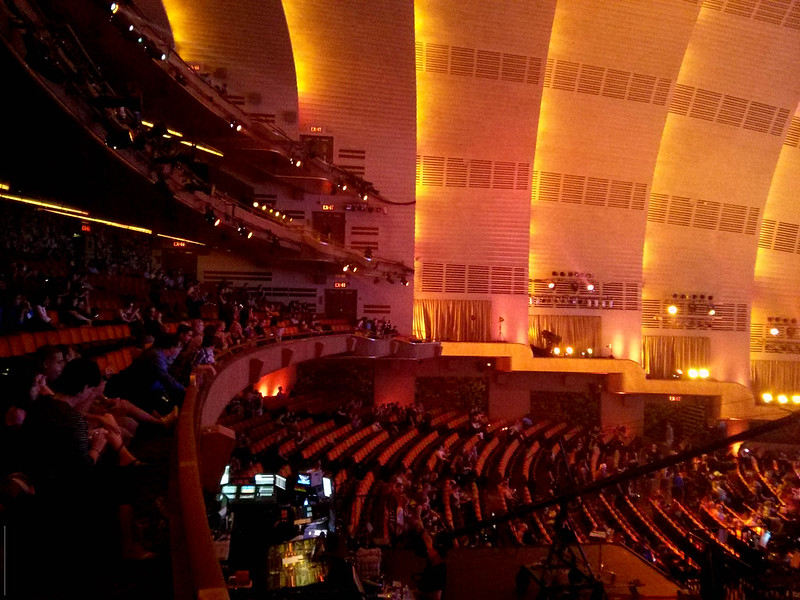 We were prompted to cheered when going to commercial, and when coming back from commercial. They had us start clapping and cheering with 10 seconds to go back from commercial break. That’s a lot of hooting and hollering in one night. They tell you to not wave at the camera, but pretty much everyone did when the camera was on them.

It can be hard to hear what is going on sometimes. The mics that the judges and the host, Nick Cannon, wear can’t be heard by the studio audience. It goes directly to the TV feed. The feedback that the judges give, sometimes you can’t really hear it , especially if the crowd is cheering (or booing), which we were prompted to do. A lot. Unless you’re sitting close, it can be difficult to see what is going on. At home, on the TV, you get close ups of everything so it’s all clear. In the theatre? Not so much.

Surprisingly most things were done live for the TV. Other than the one act and the opening of the show being filmed prior to the start of the show, everything else was live. It was very interesting to see the stage crew change the stage from act to act, building and taking away sets and dressing for the act. 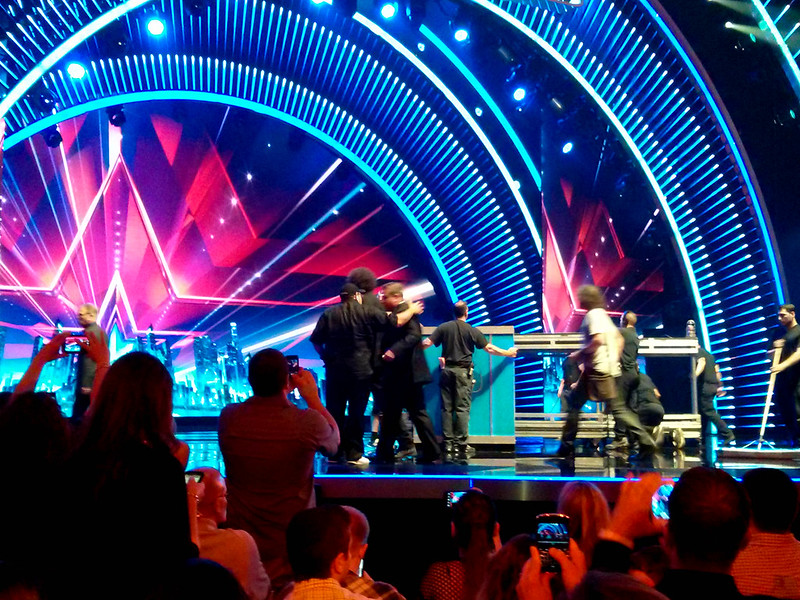 The crew moving sets around

The energy in the room significantly died towards the end of the night. I’m not sure if it is because the acts weren’t as good, or if people were just tired, but definitely it wasn’t as energetic at the end of the night and our minder had to keep trying to get the energy levels up. By the time we were let go, it was almost midnight and I was exhausted from all that yelling and expelled energy.

When I returned home, I watched the actual episode that we watched being filmed and it was a completely different experience. The acts seem better on TV compared to real life. Of course that makes sense though considering it is being made for TV, but you’d think that it would still be entertaining in real life as well.

All in all, the experience of watching America’s Got Talent being filmed live was very cool. For a couple hours you get to lift the veil of TV magic and see its inner workings. Best of all, the whole evening was free! And in NYC, a city notorious for being expensive, free is always good.

P.S. See everything I ate while in NYC & walking the High Line – how the city was able to rejuvenate an area of the city.

If you’re new to Pack Me To, welcome! Be sure to sign up for my newsletter below. The first one comes out this week!