You are here: Home / #SummerOfYVR / A Magical Night Out with the Bard
Some posts on this site contain affiliate links, meaning if you book or buy something through one of these links, I may earn a small commission (at no extra cost to you!). You can read my full disclosure policy here.

If you do one thing this summer in Vancouver, make sure you go to Bard on the Beach and see A Midsummer Night’s Dream. It is a gut busting good time. Your cheeks will hurt by the end of the production from all of the laughing and giggling you will do.

But how can something so confusing and stiff as Shakespeare be so funny, you ask? 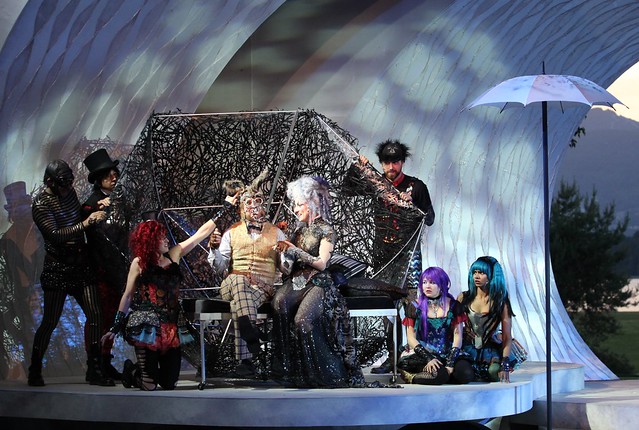 Photo provided by Bard on the Beach

Because of moments where characters break their Shakespearean character and do something modern.

Because of moments where characters break the 4th wall

Because you’ll fall in love with Puck. I had such a major crush on the character because of the way he was brought alive. Do you know how strange it is to say that about a Shakespearean character?! 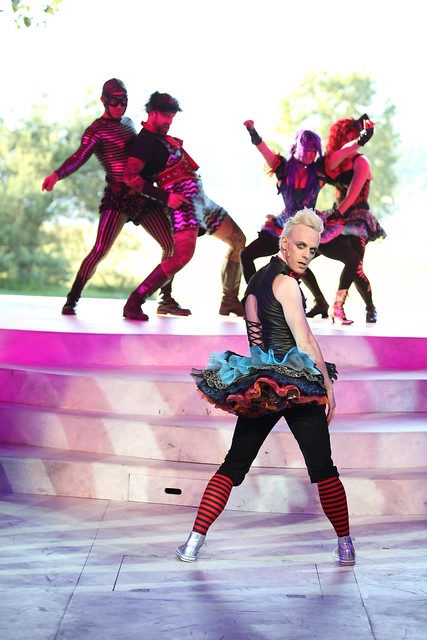 Kyle Rideout as Puck. Photo provided by Bard on the Beach.

A Midsummer Night’s Dream tells a tale of three separate stories and how they’re interwoven. One story is about a complicated love square, another tells of a company of amateur actors and thirdly a group of fairies who end up causing a lot of trouble. The result is a comedy of mischief, lovesick characters and bumbling, but hilarious actors. The makings of a great production.

Bard on the Beach is a unique experience because of where it is located. Instead of a theatre, the production is produced outside in an open-ended tent in Vanier Park, looking out at the mountains, sea and setting sun. You know you’ve arrived when you see the red and white stripes of the Bard on the Beach tents. Between the two stages, each night, over a 1000 patrons are taking in a production. The night I was there, it was completely sold out. 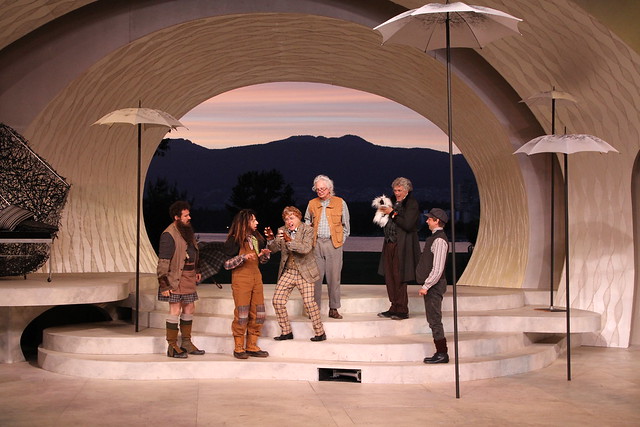 Look at that gorgeous sunset! Photo provided by Bard on the Beach

Years ago, my high school did a production of A Midsummer Night’s Dream and as I was watching this production, memories from years ago were coming to the surface. Of course we were terrible in comparison, but it was fantastic to see a play that I already liked come to life in the most fantastic of ways.

What a cool looking stage! Lots of hidden tricks in here.

I left the theatre in the best of moods having fallen even more in love with the characters of the play. Bard on the Beach is a magical experience and you don’t even have to like Shakespeare. They make the play accessible and easy to understand despite the difficult language. No wonder they’re #3 on the list of things to do in Vancouver on TripAdvisor and were recently named one of the top 10 Shakespearean festivals for travellers by Lonely Planet. This year is extra special for them as they’re celebrating 25 years of Bard on the Beach. Whats even more incredible is that this whole organization is a non profit and have been run through generous donations and volunteers.

Fangirling with Megan from Wanderlust Megan and Leslie of Ms. Leslie Santos over Christopher Gaze, the Artistic Director of Bard on the Beach.

Even if you’re not able to go see this particular production, any of the plays by Bard on the Beach are sure to entertain. In the past I’ve seen productions of Twelfth Night, Macbeth and The Tempest (currently playing again this year) which were all great to watch.

So do yourself a favour if you’re in Vancouver in the summer and go watch and production at Bard on the Beach. It’s an evening well spent.

Want to read up on the play and all the characters before you go? The Bard website has lots of resources, plus the day of the play, they offer an “In the Nutshell” session that offers a summary of what you’re about to see.

A Midsummer Night’s Dream is approximately 2h 30mins including intermission. The production contains smoke & haze. There is no photography allowed during the production. Cell phones must be turned off as well. There is a concession stand with snacks, tea and coffee available.

Tickets are very affordable with regular evenings going for $47, Sundays and Matinees for $35. See the full ticket prices here. When selecting tickets avoid sitting in the right-most section of the theatre (section 7). They get blinded by the sun as it sets. I felt so bad for the people sitting there using their hands and programs to block the sun.

Throughout the festival the Bard on the Beach also holds special events like an early performance and VIP viewing of the Celebration of Lights and and talks exploring the world of Shakespeare.

Disclosure: I received complimentary tickets to the production courtesy of YVRBloggers. Needless gushing, fangirling, and opinions are all my own. This is an awesome production and I highly recommend it. I’m considering going again and dragging my family with me. It’s so good.

« Falling Under the Spell of Berlin – Why You Need to Go Now!
20 Reasons Why British Columbia is the Best Place on Earth »