You are here: Home / Destinations / Asia / An Ode to the Japanese Convenience Store
Some posts on this site contain affiliate links, meaning if you book or buy something through one of these links, I may earn a small commission (at no extra cost to you!). You can read my full disclosure policy here.

The reputation of the Japanese convenience store precedes it. One of the first things anyone shared with me when they found out I was going to Japan was their praises for their 7-11s and the amazing selection of food they have available. 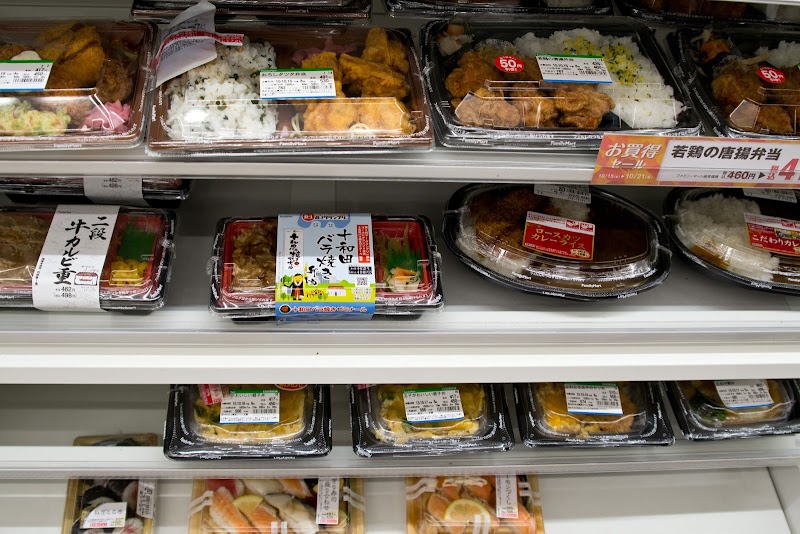 Where do I even begin?!

And I definitely was not disappointed. 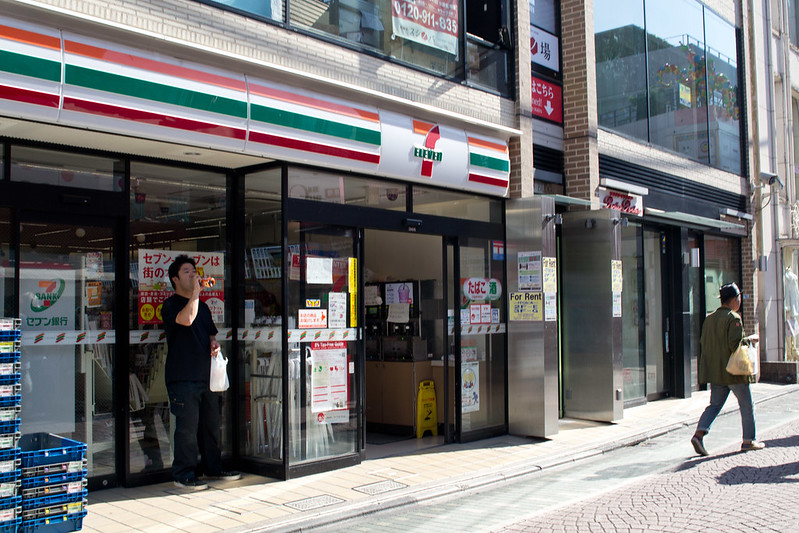 Yup! Looks the same as home.

While most people think of 7-11 when they think of convenience stores, we found a competing store, Family Mart, to be more prevalent. There are a few other chains as well (Lawson, Circle K were the most common), but they all more or less sell similar things. I didn’t have enough time to really see if there were any differences in quality. Regardless of the name, there was a convenience store on virtually every corner in the cities we visited it seemed. 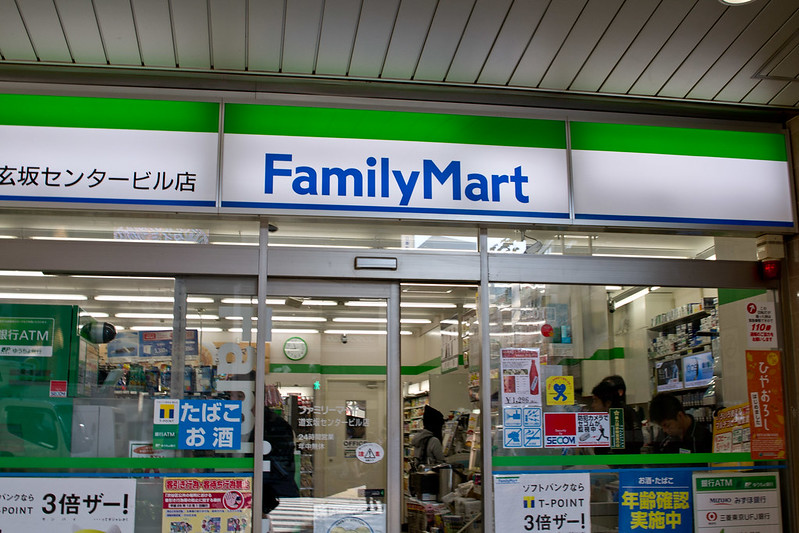 When I travel I always like to visit supermarkets, but these convenience stores were another story. There were so many fascinating things to look at. Ready to eat food, chips, candy, drinks, toiletries and they took it a step further and included things like clothing.

Chocolate! And other snacks 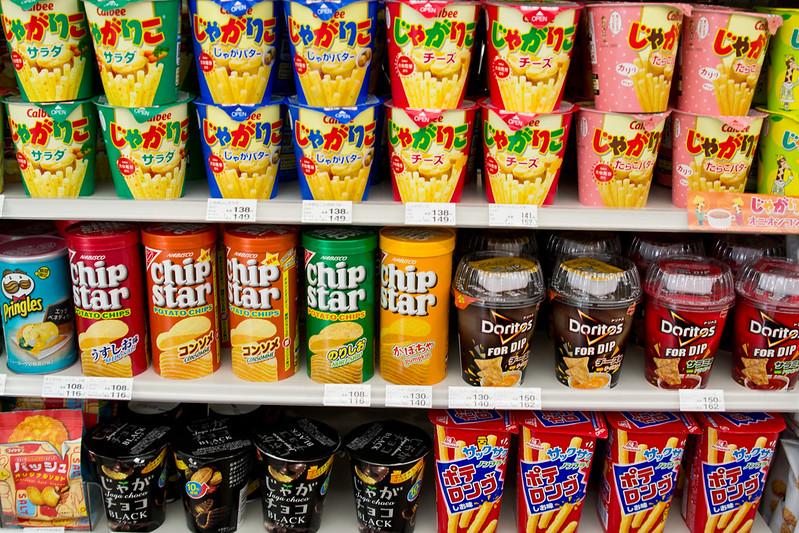 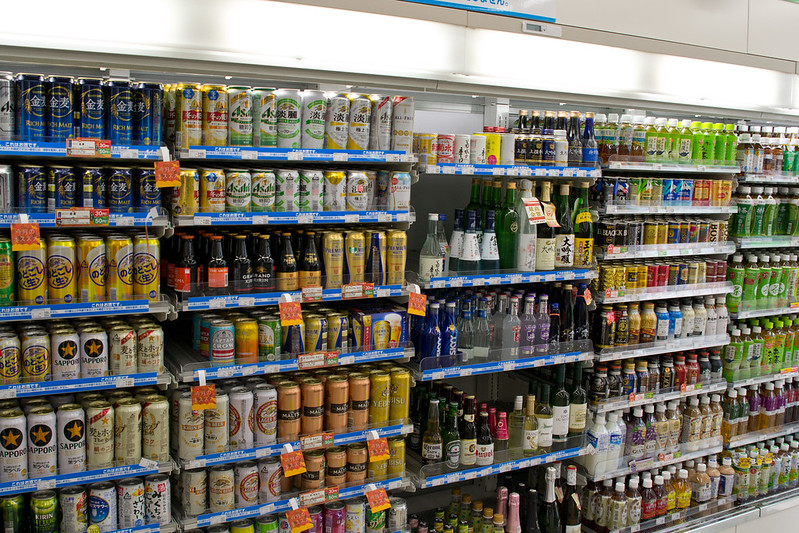 So much variety in alcoholic beverages! 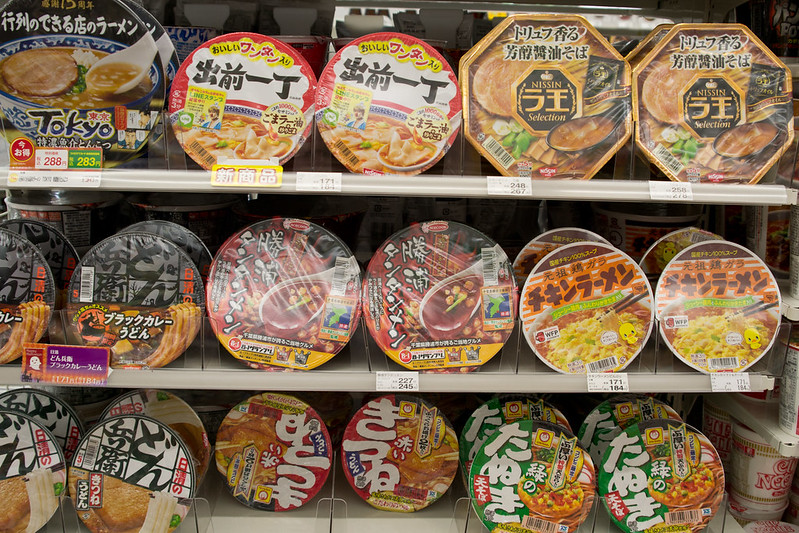 Of course you gotta have instant noodles 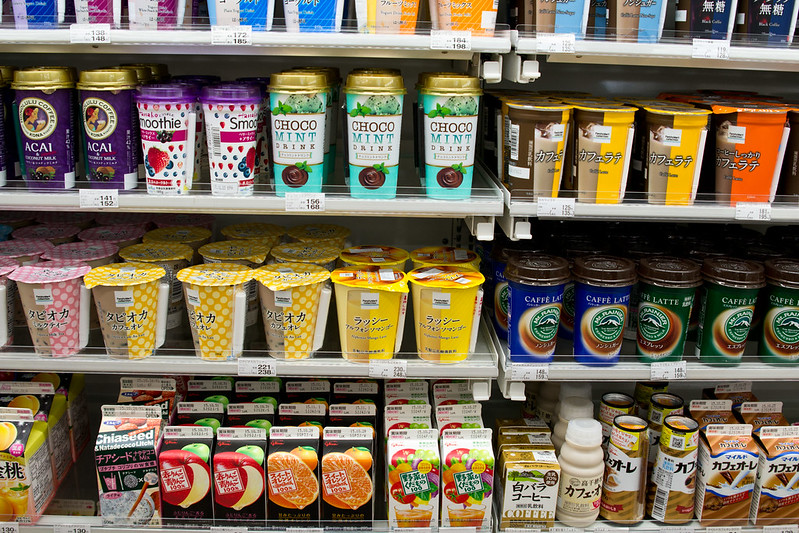 Smoothie or coffee to go?

A Variety of Ready to Eat Foods

I loved the selection of ready to eat foods they had which would put any convenience store in Canada (and anywhere else I’ve been to really) to shame. From rice balls to noodle sets to sandwiches, there were so many things to try. 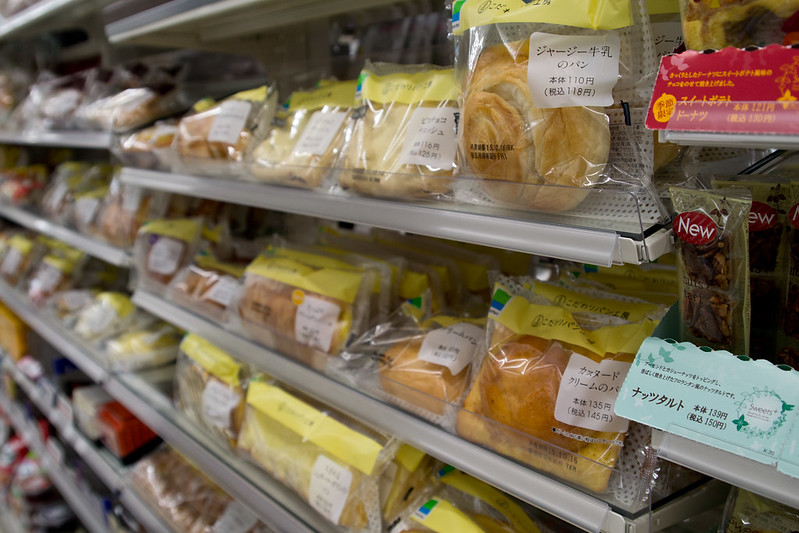 A variety of pastries 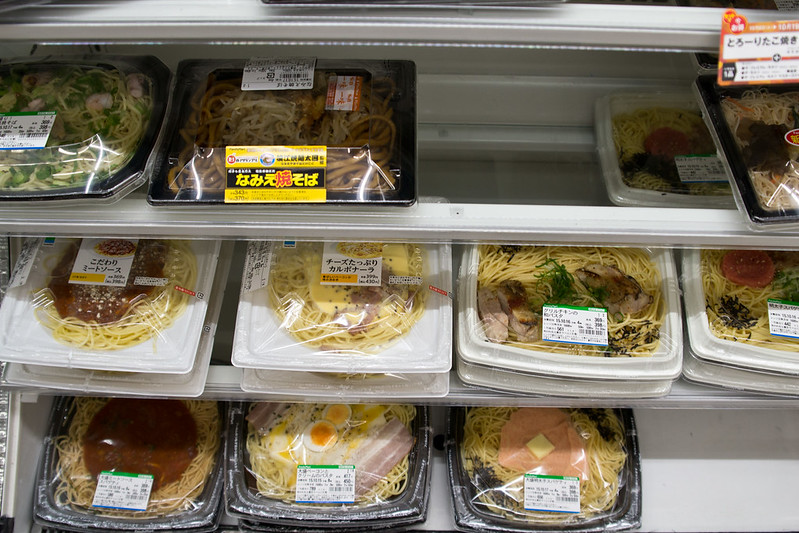 All the different kinds of noodles you could want 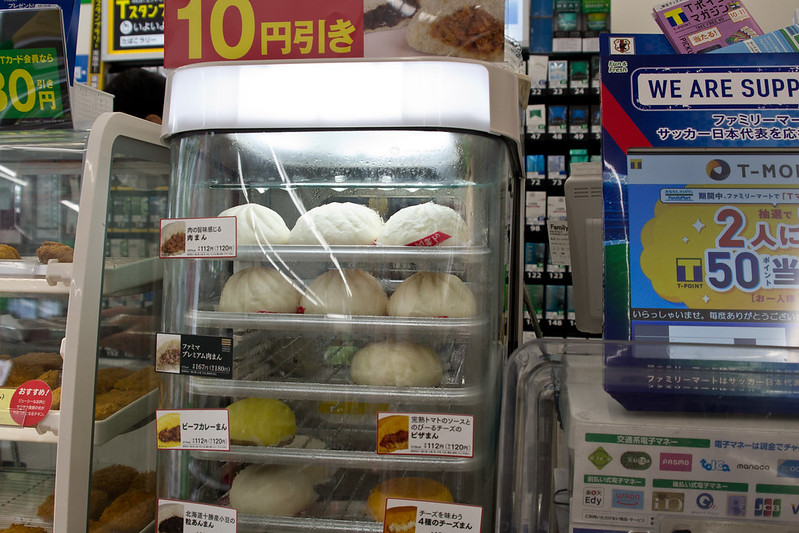 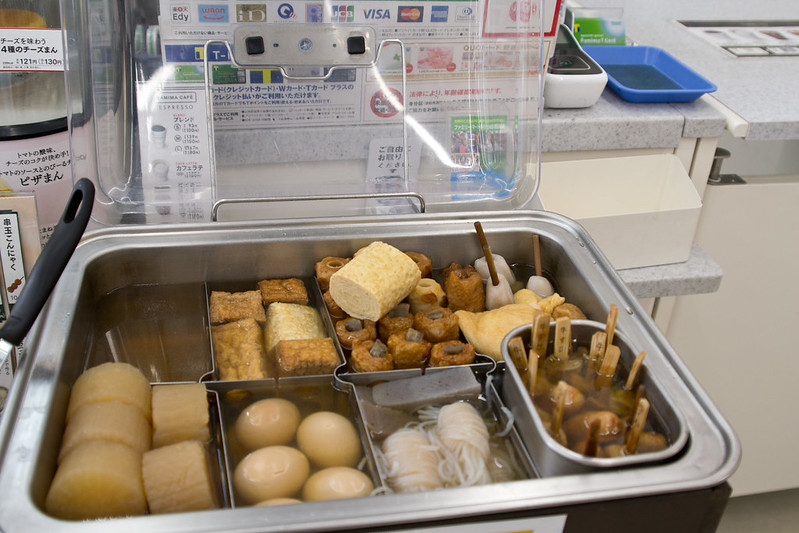 Beyond the egg and what looks to be tofu, I’m not really sure what all of this is. 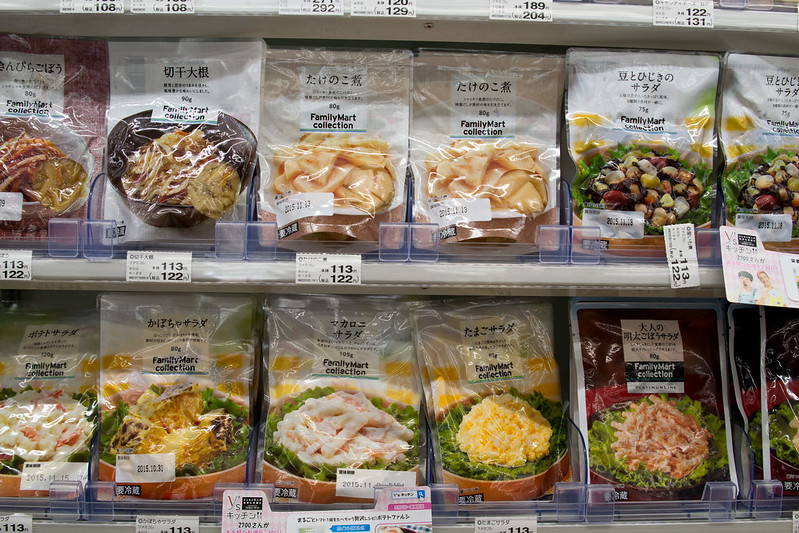 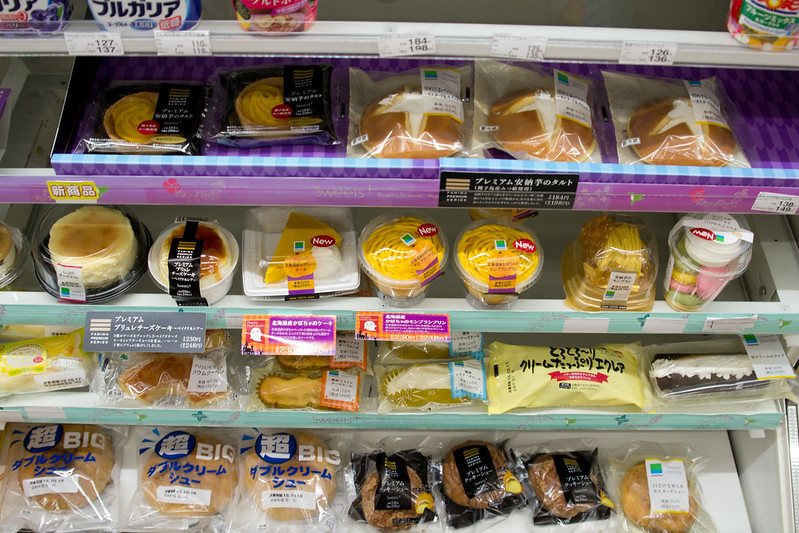 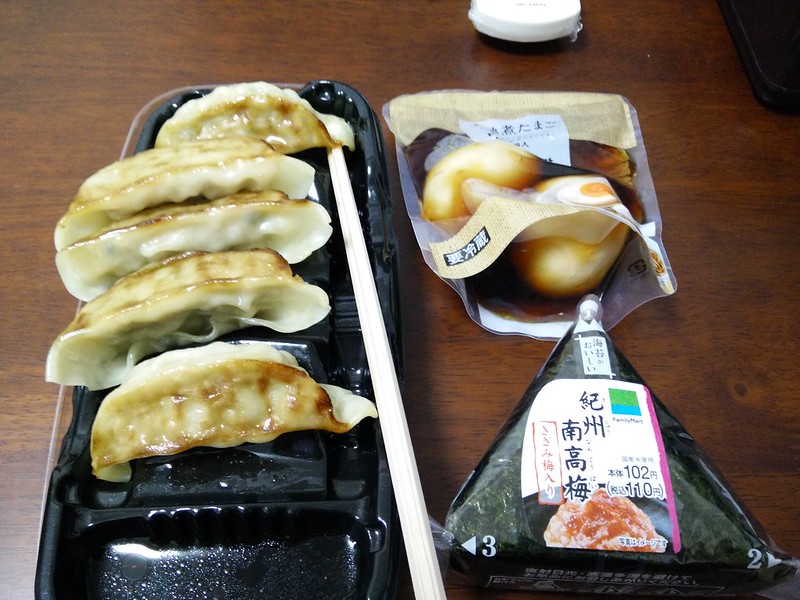 A breakfast from a convenience store: gyoza, half boiled eggs and an onigiri

I was really looking forward to eating the onigiris they had. Onigiri are rice balls formed into a triangular shape and filled with a variety of items from fish like salmon or tuna with mayonnaise to pickled vegetables to fried foods like tempura. I ate quite a few of these during my time in Japan. Almost one a day as they made for a great snack or cheap breakfast. 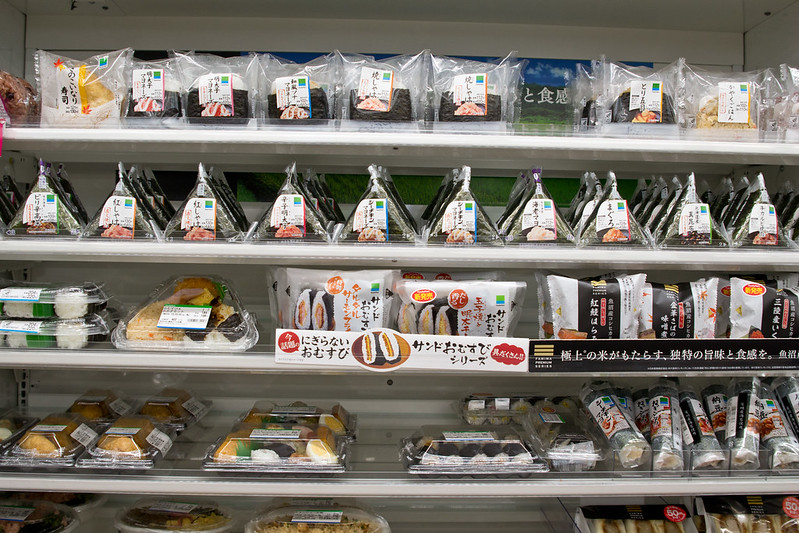 So many to choose from!

It was a bit like a game of chance with the filling. Not being able to read Japanese made it a bit difficult and even using Google translate didn’t help too much. Regardless, I found most fillings to be quite tasty. The only one I didn’t like was filled with pickled ume (umeboshi) which left a sour (both literally and figuratively) taste in my mouth. 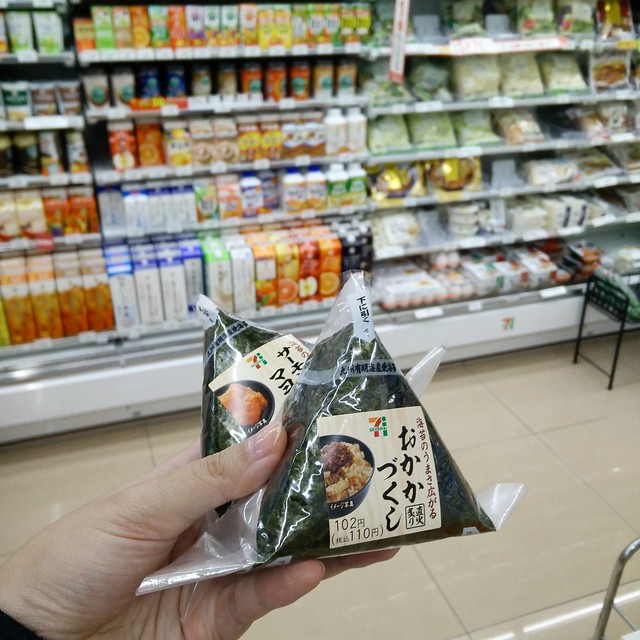 I also especially enjoyed the half boiled eggs they had available. It’s pretty incredible to me that they’re able to keep the correct egg yolk consistency. 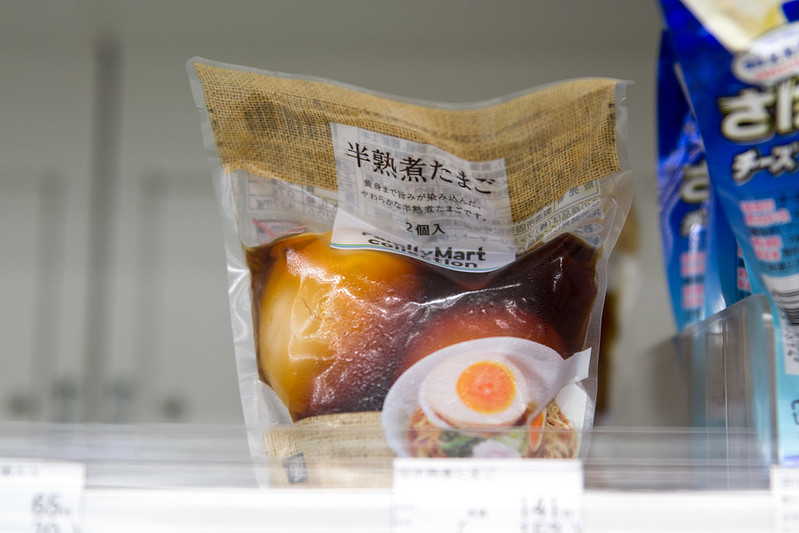 Another favourite were the mini bubble teas in the Family Mart which were the prefect size for me. They came in a variety of flavours like coconut, milk tea and coffee. 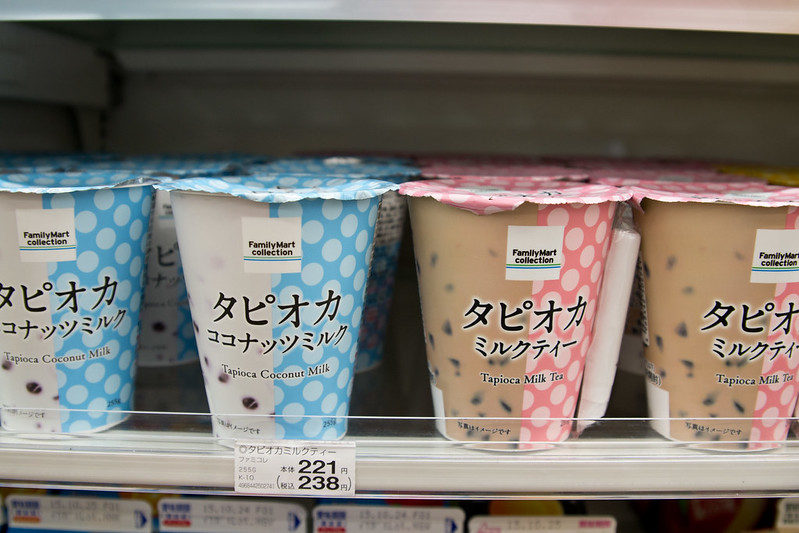 I also discovered these canned cocktails which I think has shōchū, a Japanese distilled spirit, mixed with juice or soda called Chu-Hi. I tried quite a number of flavours all of which I thoroughly enjoyed.

The Weird and Wonderful

There were quite a number of unusual things I found too: 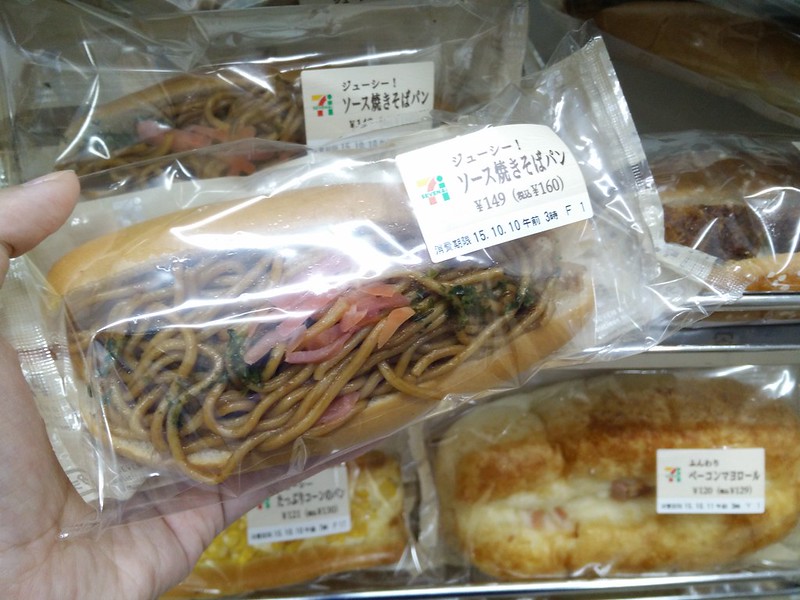 I like my noodles, but not so sure about it in a bun 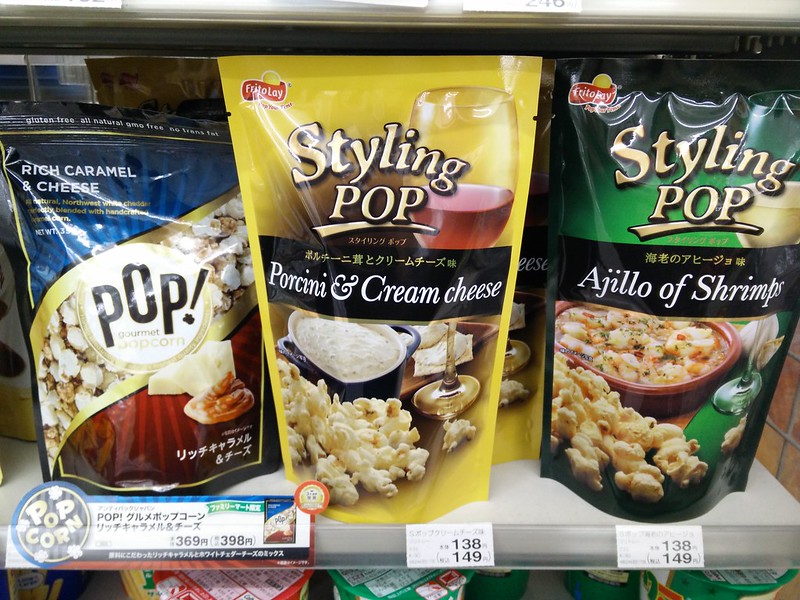 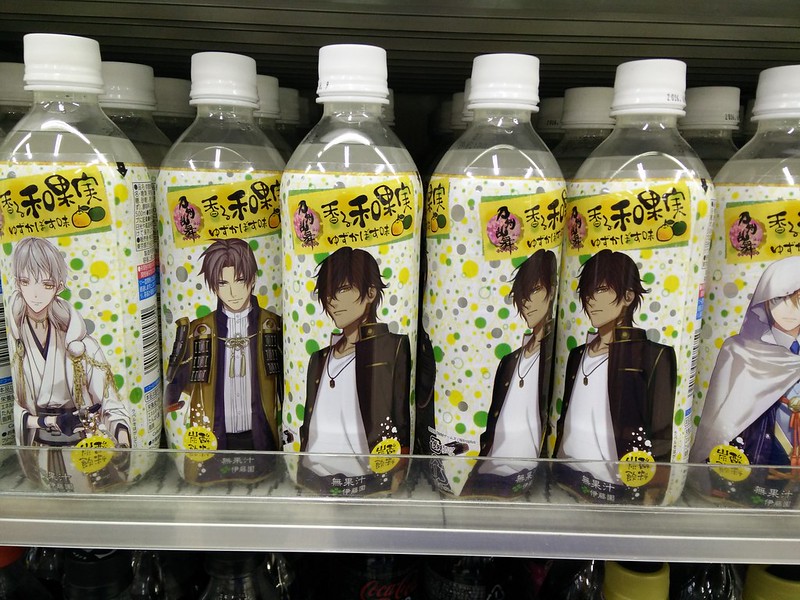 When in Japan anime is the selling point 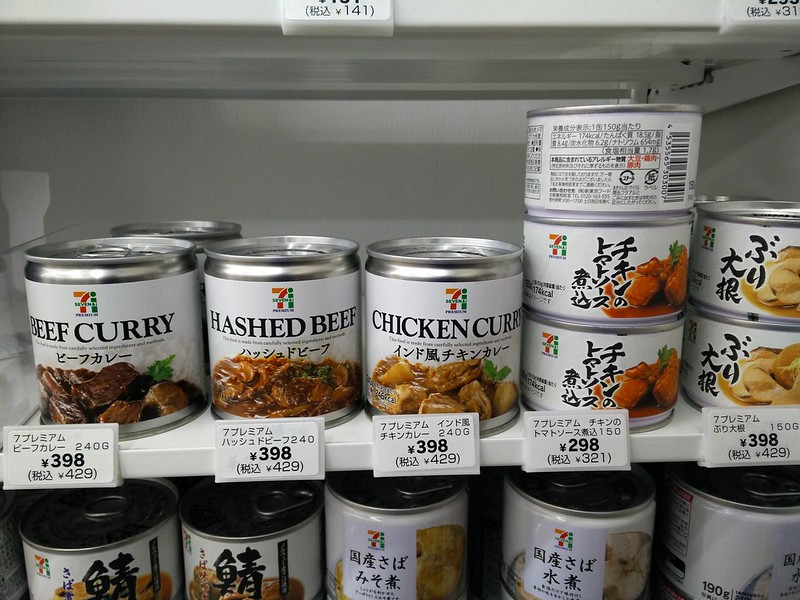 I had such a great time wandering through the convenience store. I could have easily spent an hour just looking at all the different brands and things for sale. Not to mention eat my way through it! Now, if only I could pack one of these convenience stores home with me, that would be fantastic!

What unusual aspect of a culture tends to fascinate you when you travel? Have you been to a Japanese convenience store? What were some of your favourite discoveries?

« Dreaming of Iceland: The Land of Fire and Ice
Inside Yoyogi Park: Tranquility in the Heart of Tokyo »