You are here: Home / Destinations / Europe / Walk Among the Gods at the Acropolis of Athens
Some posts on this site contain affiliate links, meaning if you book or buy something through one of these links, I may earn a small commission (at no extra cost to you!). You can read my full disclosure policy here.

Dominating the skyline of Athens, high above the city, is the famous Acropolis, one of the most recognizable monuments in the world. The Acropolis, and especially the Parthenon, is a symbol of ancient Greece and democracy. Built in the 5th century BC under the direction of Pericles, the Acropolis is made up of a series of buildings, and today it is a UNESCO World Heritage Site and a must-visit for anyone in Athens.

Getting into the Acropolis is easy thanks to its two entrances, one in the north by Monastiraki and the other to the south by the Dionysiou Aeropagiou pedestrian street. While the south entrance passes by two ancient theatres and offers a gentler incline to the Acropolis, the north side is recommended by many due to its cultural significance, although it has a much steeper incline. 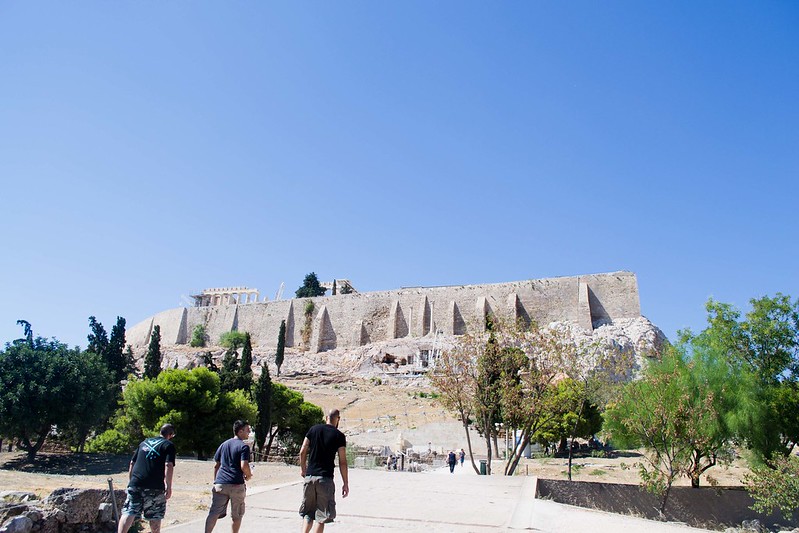 Regardless of which you choose, be prepared for the steps. Much of the pathway is clear, but occasionally there are loose rocks, and, in some parts, the path is worn due to many footsteps over time. Go early to beat the crowds, and in the summer, avoid the draining heat.

If entering from the south, be sure to explore the Theatre of Dionysus, which dates back to the fourth century BC, and the better-preserved Odeon of Herodes Atticus, which is now a prominent performance venue. 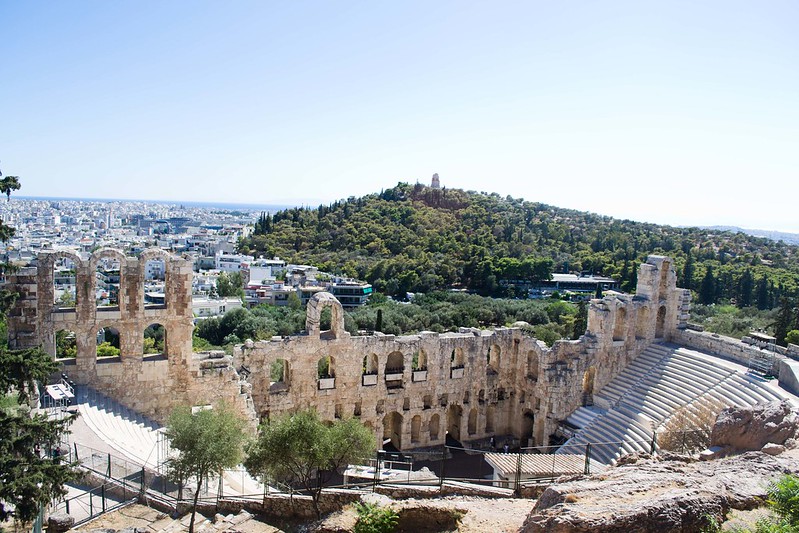 Providing a grand entrance to the Parthenon is the dominating Propylaea. Built from marble, it provided security to the other buildings within the Acropolis. Other historical buildings like the Brandenburg Gate in Berlin and the Propylaea in Munich mimic the centre columns found here. 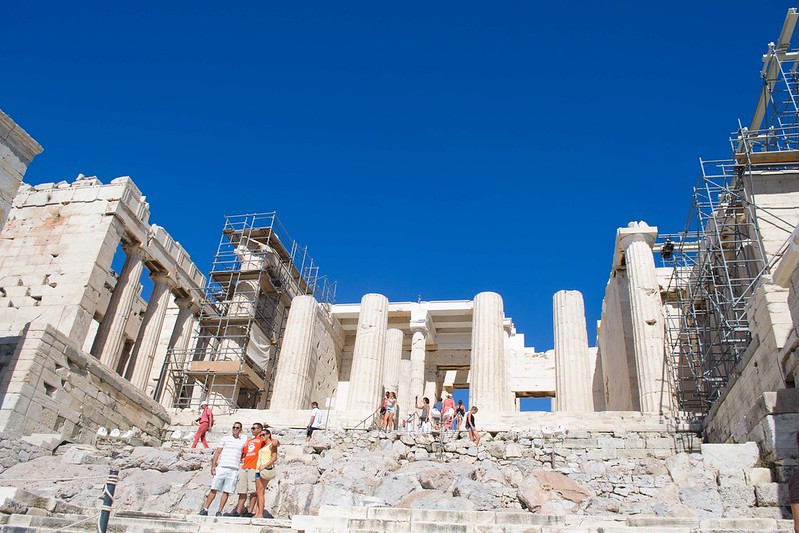 Doesn’t look as grand these days due to all the scaffolding and repair work.

From a distance, the Parthenon doesn’t look that big, but its sheer size and magnitude is clear. The Parthenon was built to honour the goddess Athena, who the people of Athens considered their patron. It has experienced quite the violent history, with it exchanging hands many times, and even now, there is controversy over marbles that once adorned the building. 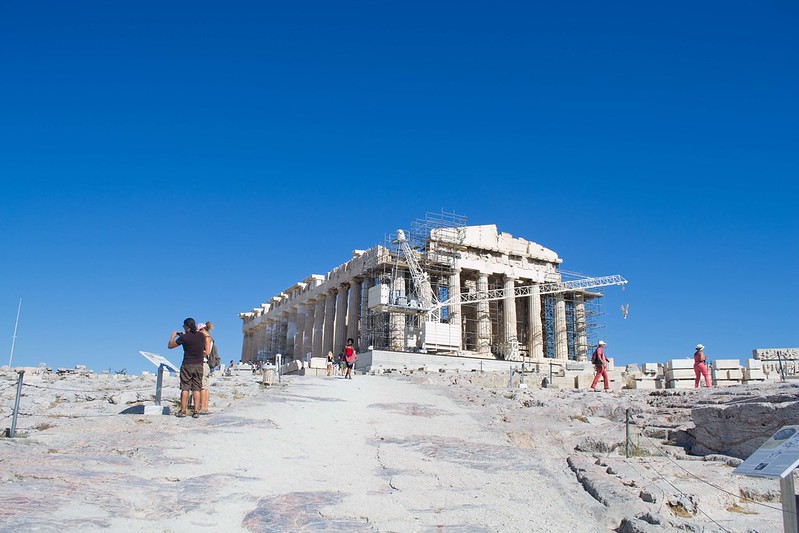 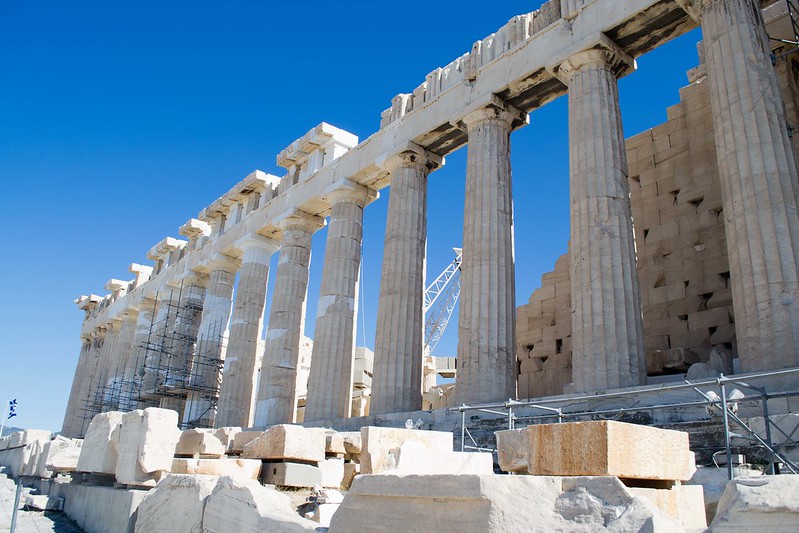 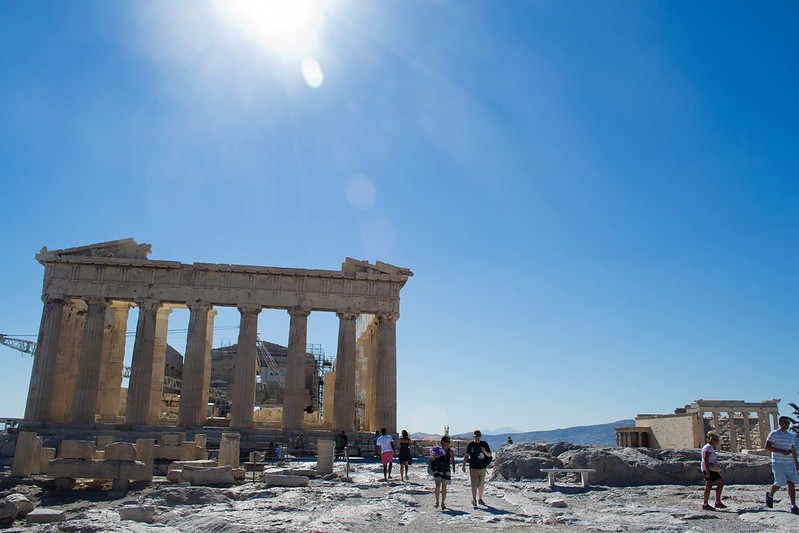 Scaffolding and various other construction materials have surrounded the buildings on the site for years. While detracting from the overall aesthetics of the building, this is necessary work to preserve the building for future generations. 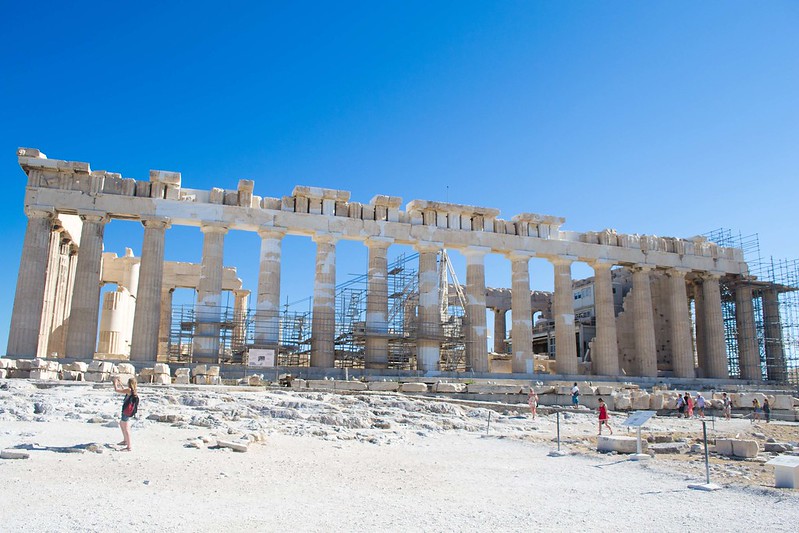 Other Buildings of Note

Other buildings of note at the Acropolis include the small Temple of Athena Nike and the Erechtheum. Despite its size, the Temple of Athena Nike has significant importance as the first Ionic style building in Athens. The Erechtheum is said to have held some of the most ancient artifacts of the time and is famous for the Caryatid Porch which features beautifully carved maidens and supports the building. 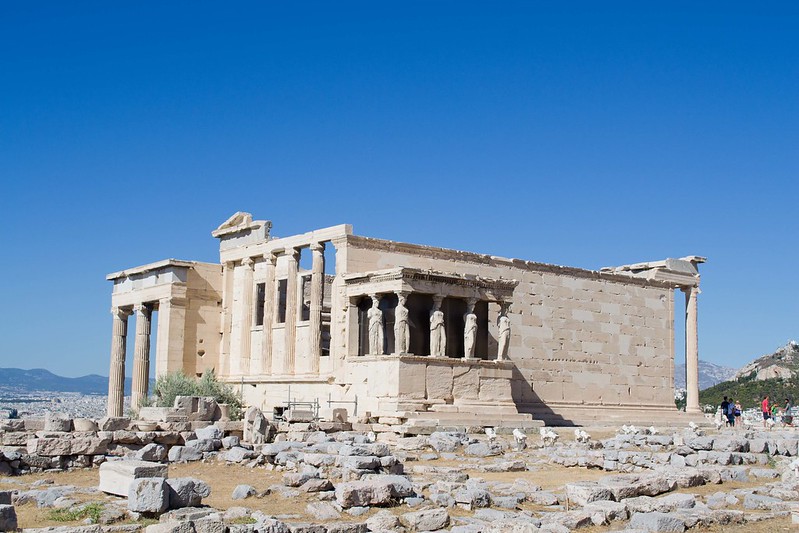 You can see the Caryatid Porch and the carved maidens of Erechtheum in the centre of this shot here.

Have you visited the Parthenon? What was your favourite building?

« The Markets of Hong Kong – A Shopper’s Paradise
In Photos: Hong Kong at Night »