You are here: Home / Destinations / Incredible India: Visiting the Taj Mahal
Some posts on this site contain affiliate links, meaning if you book or buy something through one of these links, I may earn a small commission (at no extra cost to you!). You can read my full disclosure policy here.

When I found out for sure that I was going to my friend’s wedding in India, I knew I had to somehow make a trip to see the Taj Mahal. I had to figure out a way to get myself to Agra from Chennai where the wedding was to be held which is on the south-east coast. 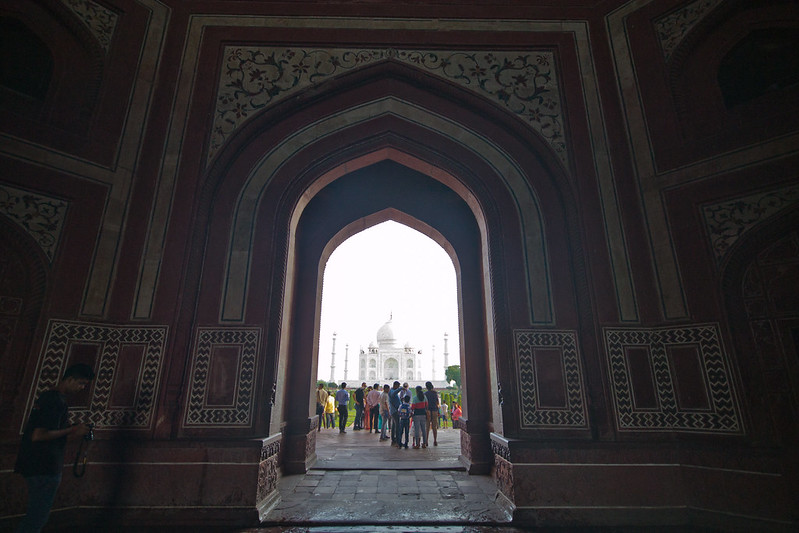 A first glimpse through the entry way

Luckily, I was able to carve out a handful of days to head up to New Delhi and Agra. While it was amazing to experience some of the things in New Delhi like this stepwell and the Lodi Gardens, the raison d’etre of being up north was to visit the Taj Mahal. 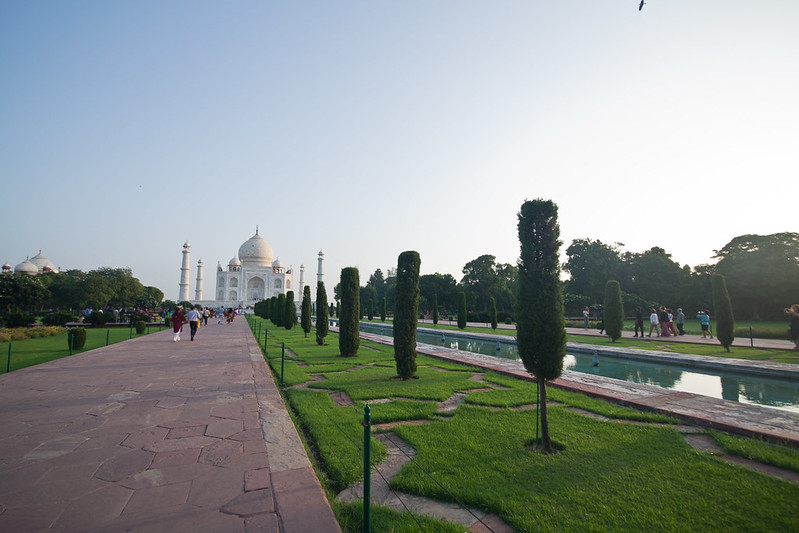 I didn’t think I would even see the Taj Mahal in my lifetime. To be honest, the idea of visiting India terrified me so it was never a priority for me to make plans to go. So when all the pieces starting coming together and a visit to see the Taj Mahal became a reality, I was so incredibly excited. 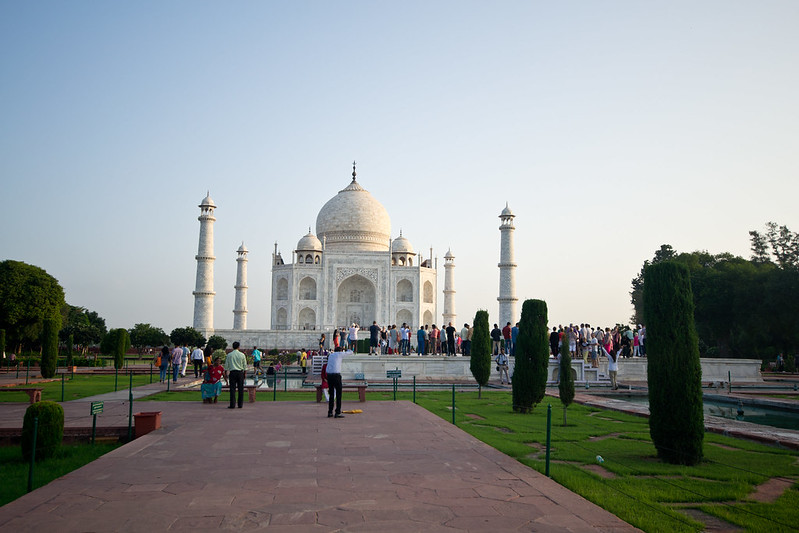 The Taj Mahal is a mausoleum commissioned by the Mughal emperor Shah Jahan to house the tomb of his favourite wife. It was completed in 1648 and is considered one of the best examples of Mughal architecture combining elements from Persian, Indian and Islamic architectural styles. 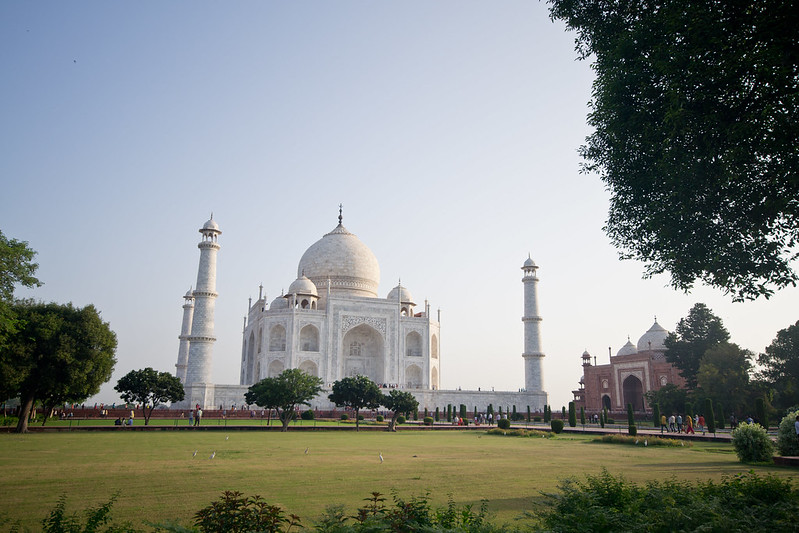 The Taj Mahal is built using materials from all across India and Asia. The translucent marble that is the dominant feature of the building came from Makrana, Rajasthan. The calligraphy is jasper, or black marble, hailing from Punjab. A total of 28 types of precious and semi-precious stones are inlaid into the marble coming from as far as China, Tibet and Afghanistan. 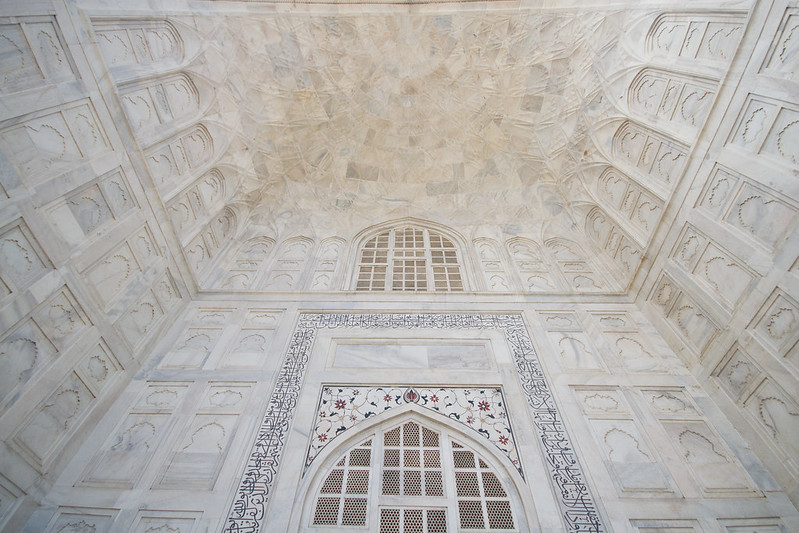 In 1983, the Taj Mahal was designated a UNESCO World Heritage Site for being “the jewel of Muslim art in India and one of the universally admired masterpieces of the world’s heritage.” It is listed as one of the New 7 Wonders of the World. 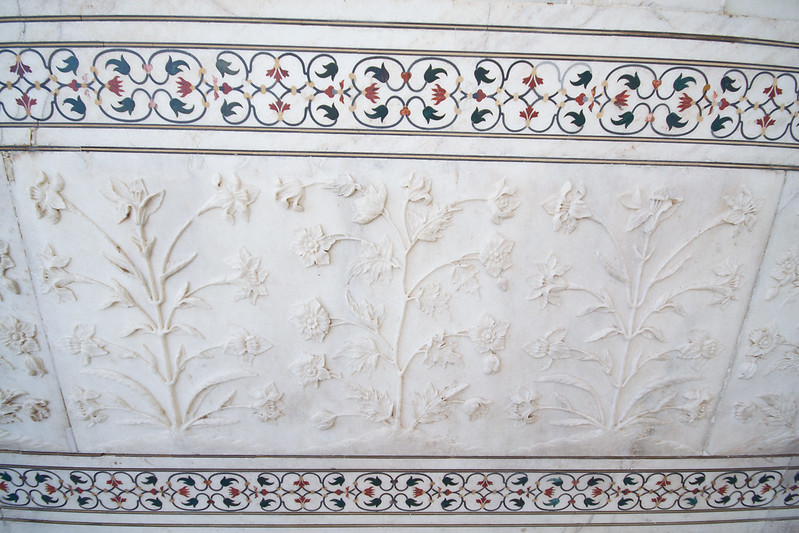 Look at how intricate it is! 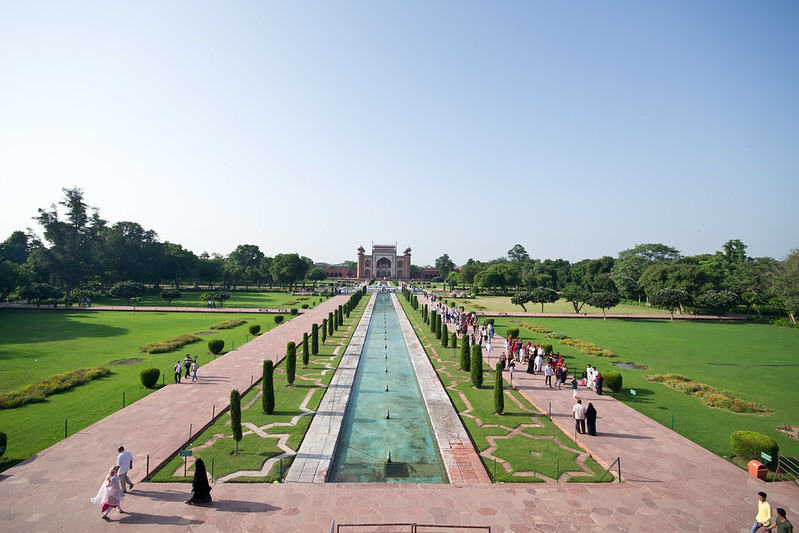 Overlooking the gardens from the Taj Mahal

To get up close to the Taj Mahal, you have to put on some protective booties. You can also enter the building to see the tomb inside. Most of the building is empty and is a series of hallways. If you were coming to the Taj Mahal to see the inside, you’d be sorely disappointed, so don’t expect much. It really is all about the exterior.

While the mausoleum is the focal point, also within the complex are a mosque and a guest house. Running behind the Taj Mahal is the Yamuna river. There is also a viewpoint of the Taj Mahal from the other side of the river. 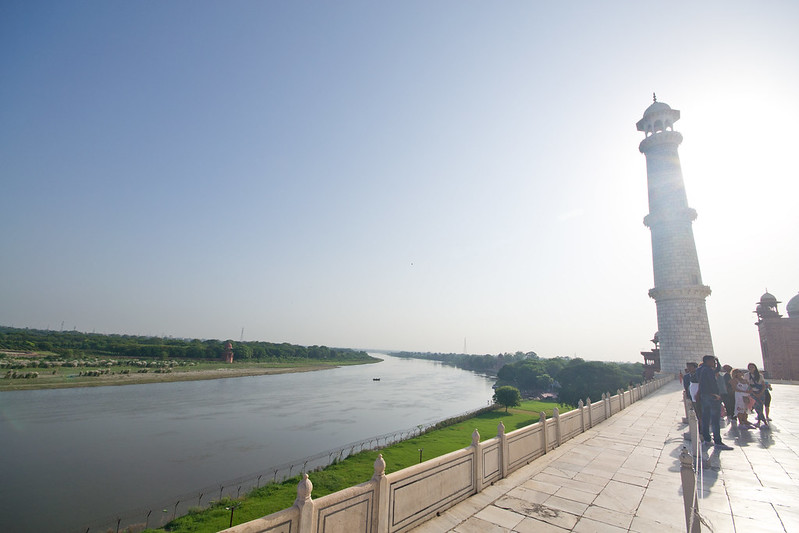 The Yamuna river behind

Some of my friends told me that it wouldn’t be worth the trip – that the Taj Mahal is overrated and overrun with tourists. But to be honest, what major tourist attraction isn’t filled with tourists? That’s what they’re there for and I’m totally okay with that! And while I’ve been underwhelmed by some major sites (like the Leaning Tower of Pisa), at least I still have gone to see them myself! 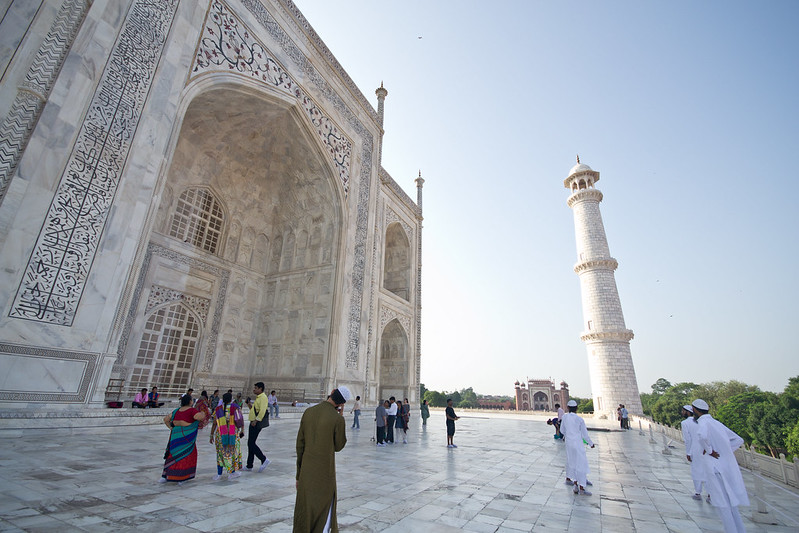 Others who have visited warned me about the contrast between the complex and its surroundings making them feel uncomfortable. I thought this was odd before the visit, but afterwards, I could kind of understand. The Taj Mahal and surrounding grounds are impeccable and incredibly well maintained, but just outside the gates, you return to the rest of India with its crumbling sidewalks and buildings, organized chaos and litter. The juxtaposition wasn’t lost on me and it definitely was strange to see that. However, the same can be said about most of the other spots that I visited in India: Lodi Gardens, the Agra Fort, Gandhi’s memorial and the Prem Mandir temple to name a few. 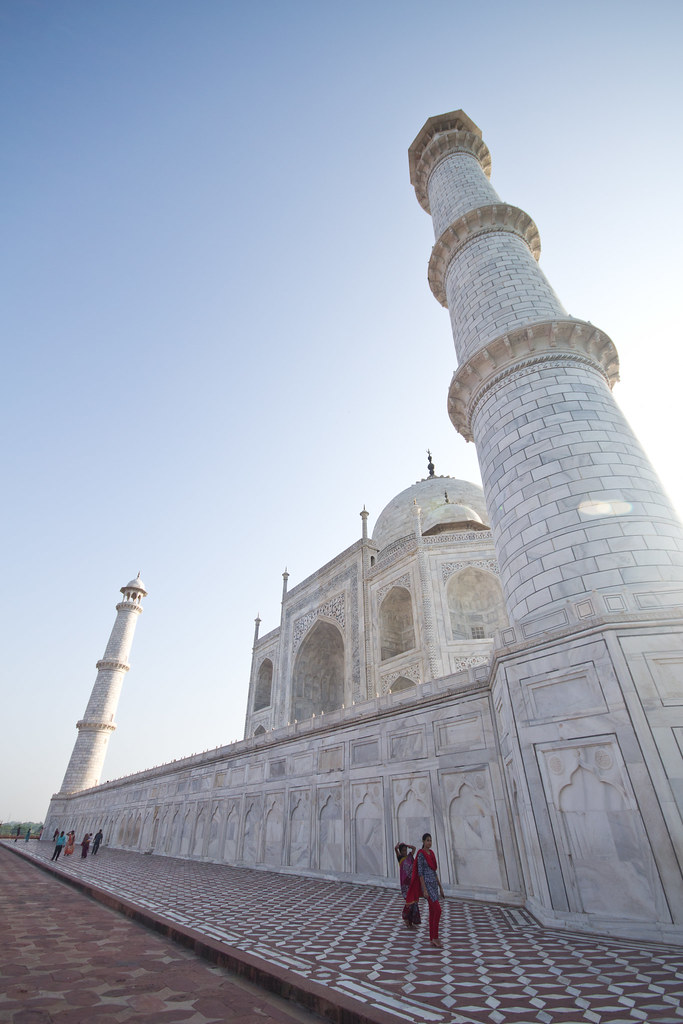 Despite the warnings, I was so completely blown away from the Taj Mahal. It’s so much more than I could have ever imagine from pictures. It’s bigger. It’s whiter. It’s more intricate. And when set against the pale blue morning sky, it looked like a painting. It really has to be seen in real life to appreciate it. 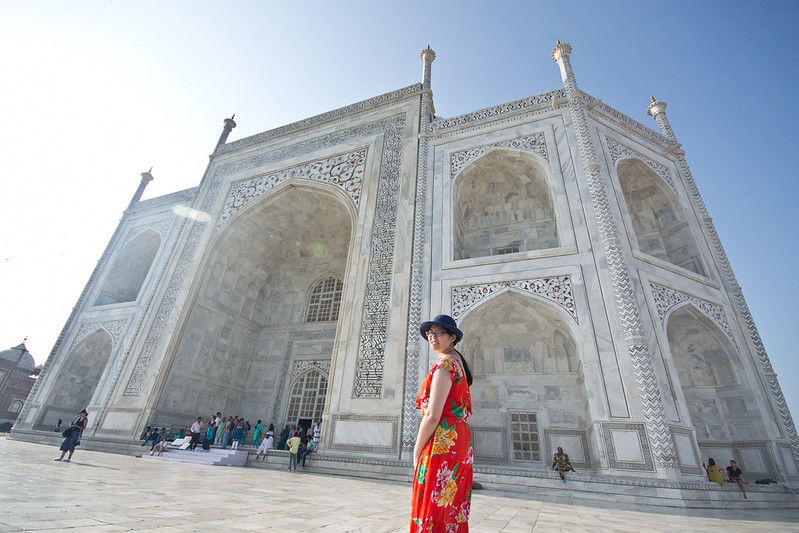 I’m so glad I decided to make the effort to fly up north and drive out to see the Taj Mahal. It really was just incredible and one of the more memorable experiences during my time in India. Sure, getting up early sucked, but it was so worth it. The Indian tourism agency markets themselves as Incredible India and after seeing the Taj Mahal, it really does make that ring true.

Looking for accommodation for your trip to Agra?

I stayed at the Radisson Blu Hotel which is just a short walk away from the ticketing booth for the Eastern Gate. The room was extremely comfortable and came with breakfast. It’s also really reasonably priced especially for a Radisson which can get quite expensive in North America. Book your stay on Booking.com or Hotels.com and check out reviews on Tripadvisor.

Have you been to the Taj Mahal? What did you think? Have you been impressed or disappointed by any major tourist destinations?

« Lodi Gardens: Tombs, a Mosque, and So Much More
Adventure in the Arctic – Top 10 Things to Visit »