You are here: Home / Personal / A Look At 2017 Through Food – My Best Meals
Some posts on this site contain affiliate links, meaning if you book or buy something through one of these links, I may earn a small commission (at no extra cost to you!). You can read my full disclosure policy here.

Food and trying out new dishes and flavours is such an important part of travel for me. Every year, besides sharing my most memorable moments of the year, I like to take a look back at some of the best meals I’ve had that year in celebration of the travel and meals I had.

Because of the amount of time I spent in Japan and the effort I took to seek out really good food while there my best meals of 2017 is heavily focused on my Asian adventures. Beyond that, I managed to find a couple of other tasty things from other places I’ve visited in 2017. Here are the best things I ate in 2017:

Beef so good, I dedicated a whole post to it. While you may have heard tons about Kobe beef in Japan, I bet you’ve never heard of Hida beef. While both are wagyu (aka Japanese cattle), Hida beef comes from the Hida region of Japan and Kobe from Kobe. The beef is reflective of the diet that the cattle have where they are raised. That one meal of beef was so tender and so delicious. 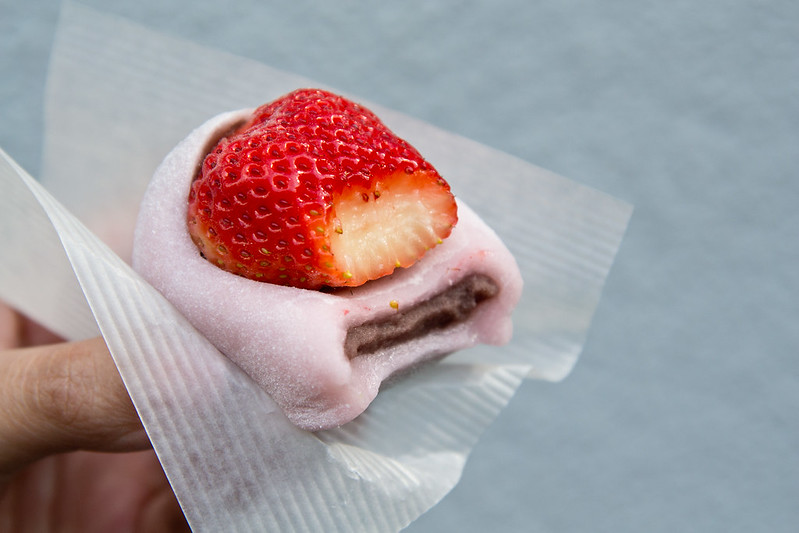 This treat has all the things I love in it: red bean, mocha and a fresh strawberry to top it off. The combination was so good. Although I had this treat a couple of times around Japan, it was this found spotted in Nishiki Market in Kyoto that left me wanting more. 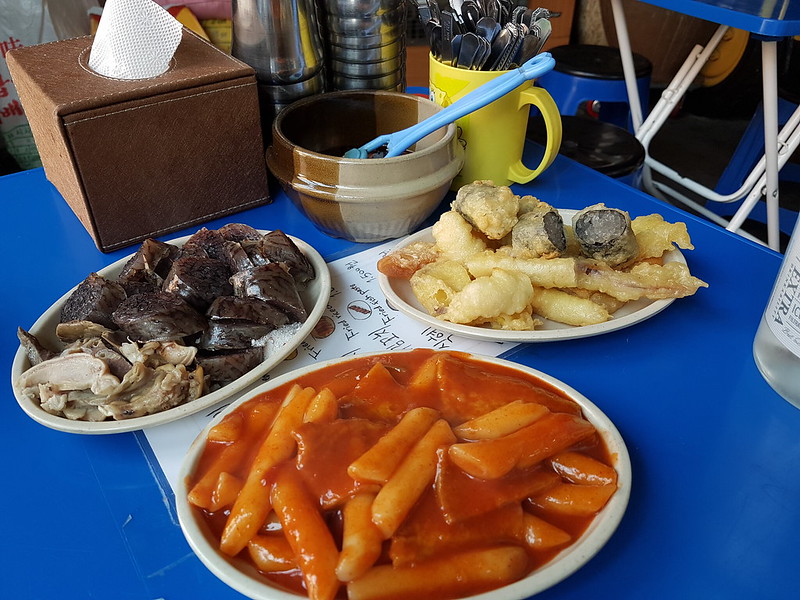 This was one of the first meals I had a Seoul. While wandering around Bukchon Hanok Village, we ducked into a little stall to grab a bite. The only thing I recognized was the tteokbokki or spicy rice cake. We ended up also ordering “fried stuff” because of the mystery of it all and the lady taking the order recommended that we try out what turned out to be Korean blood sausage (sundae). While the sundae is definitely an acquired taste, I thoroughly enjoyed the other two dishes. The fried stuff was exactly that – a variety of vegetables, seafood and more of that blood sausage fried. The tteokbokki, one of my favourite Korean dishes, was super flavourful and yummy – better than any other one I’ve ever had.

A meal of side dishes at Sigol Bapsang in Seoul 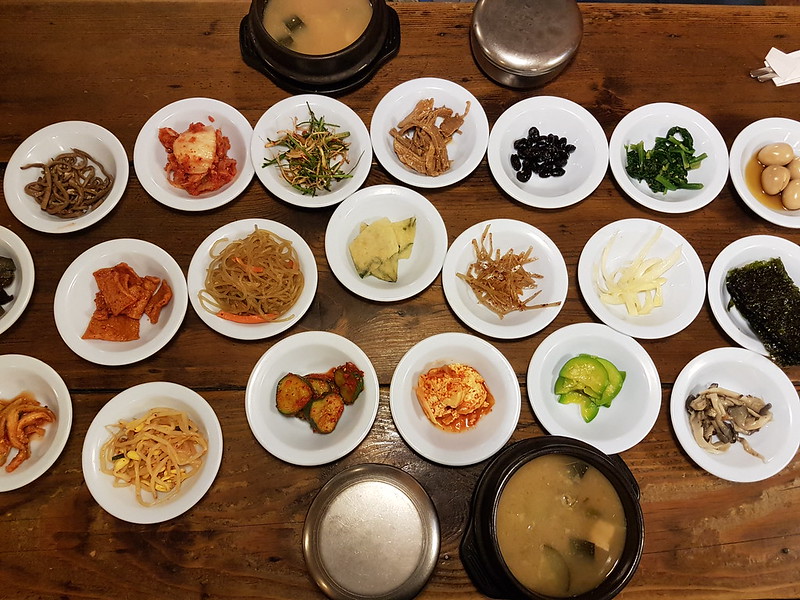 In Korean, with every meal, you’re served a variety of side dishes called banchan. These side dishes can range from kimchi to steamed vegetables to japchae (glass noodles) to potato salad. There is so much variety! This restaurant was well known for its huge variety of banchan that comes with its tofu soup and it did not disappoint. We had enough side dishes to cover the table! What we didn’t realize is we would have gotten the same amount of banchan even if we had only ordered one portion. We could have gotten another dish to try for the same amount for the soup. If you go, be sure to do that so you can try some other things and save a little money as well! 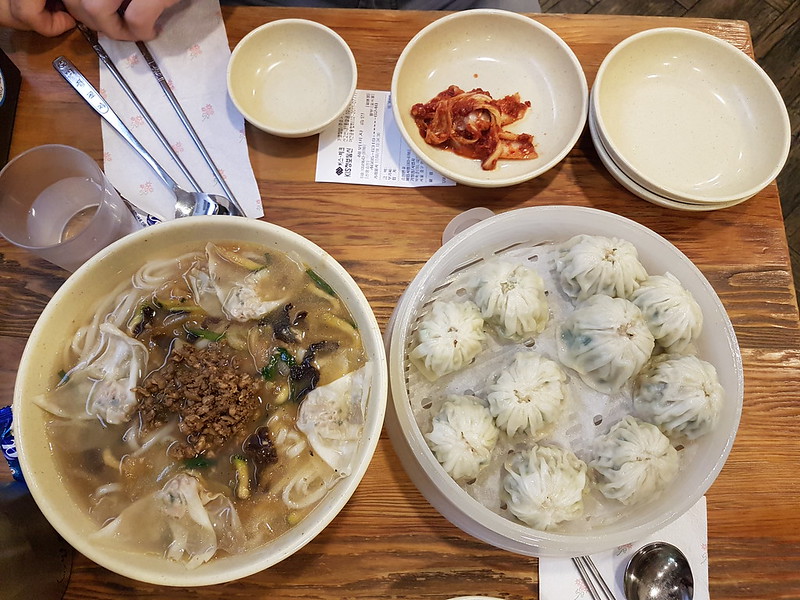 I have always associated hand cutting noodles with China (specifically Shanxi province in the north), but seeing South Korea’s proximity to China it makes sense. This restaurant actually has two locations and lines are long at both. However, they’re really efficient at seating people and we didn’t have to wait too long in line. Once we ordered our food, it all came quickly and swiftly. We ordered a set of steamed dumplings and a bowl of the cut noodles. Aside from the kimchi, I was so thrilled that nothing was spicy! Instead, everything was super flavourful. I enjoyed the texture of the noodles. The broth was tasty and warmed us right up from the chilly spring day. 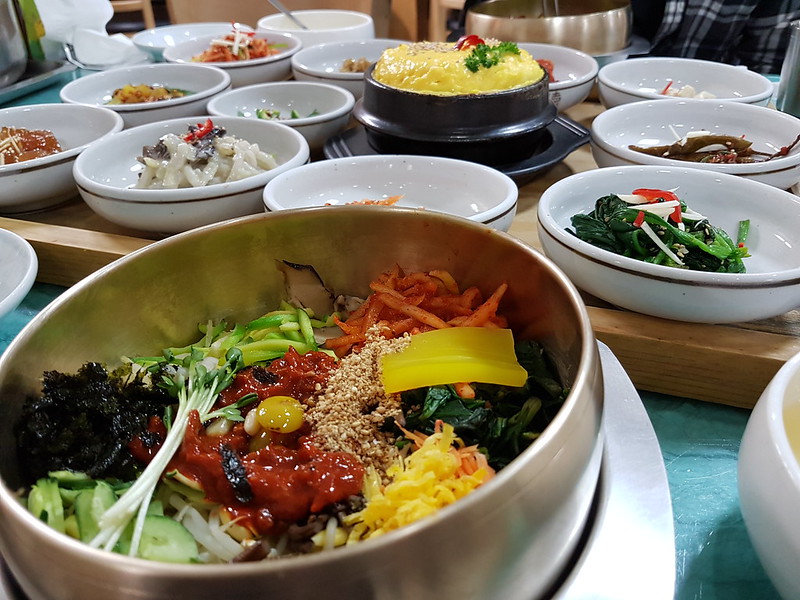 They say bibimbap, literally “mixed rice” in Korean, originated from the city of Jeonju. Rice is topped with a variety of vegetables and sauce in a stone bowl. Before eating, you’re supposed to mix everything together. At the recommendation of our hostel owner, we sought out a restaurant famous for their bibimbap. Our meal came with a variety of banchan as well which made the experience so much more flavourful. I just wish there was less gochujang, Korean chili paste, topping my bibimbap. Not even halfway through my meal, my mouth was on fire. 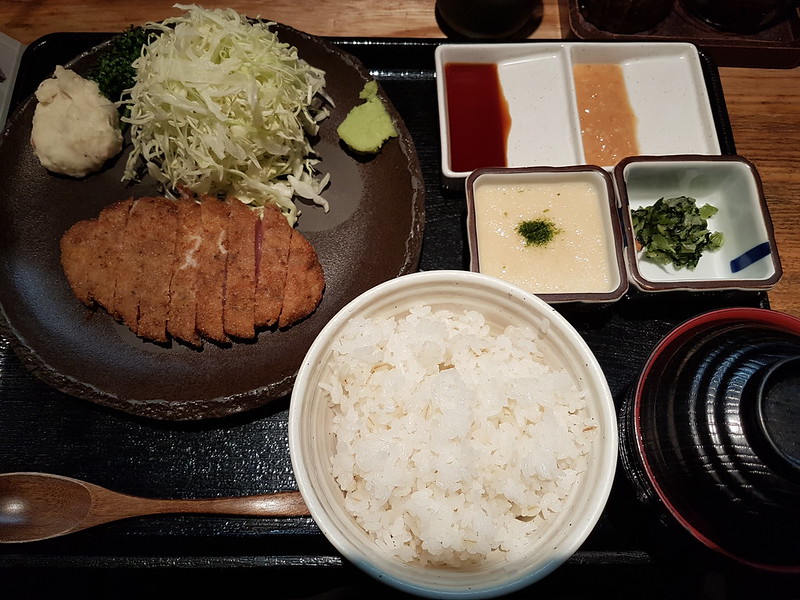 I’ve heard of tonkatsu, pork cutlet lightly battered and deep-fried, but I had never heard of gyukatsu before. This is a similar dish, but made with beef. The beef is cooked rare and you have your own individual cooking element served with you meal to finish the meat to your liking. The novelty and the interactive nature of this meal made it one of the highlights of my time in Tokyo.

Tempura at Tenmatsu in Tokyo 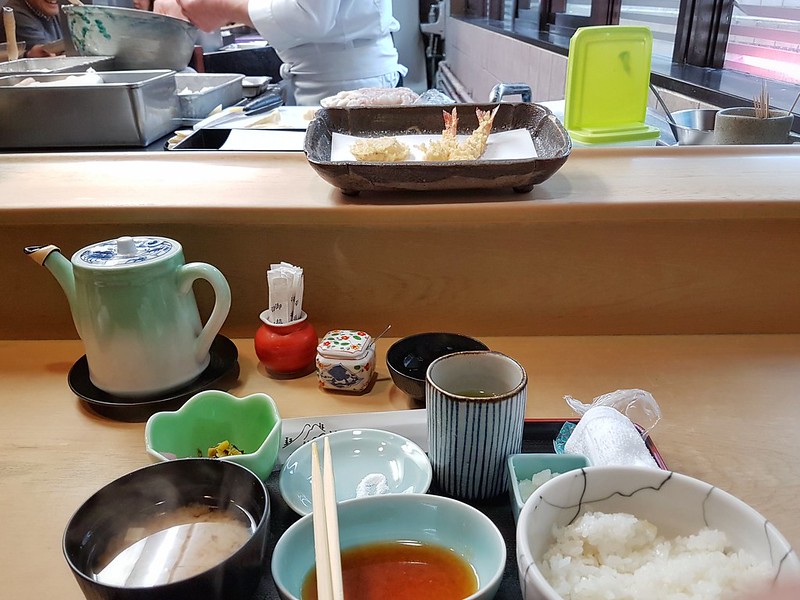 I love tempura. It’s one of my favourite Japanese dishes (but to be fair, I love all Japanese food). On my previous visit to Japan, I didn’t have an opportunity to try out a really good tempura restaurant so this was high on my list of things to taste. Most of the time, when I’ve had tempura, they were all served together on a dish, but this restaurant I found in Ginza, served it piece by piece. People filed in as soon as the restaurant opened and it was like an omakase experience, but with tempura. Never have I had such lightly battered and fried tempura. It was so fresh. The meal was served with rice and miso soup as well. Because you’re sitting at the bar, you can watch the chef at work. Such a cool experience. 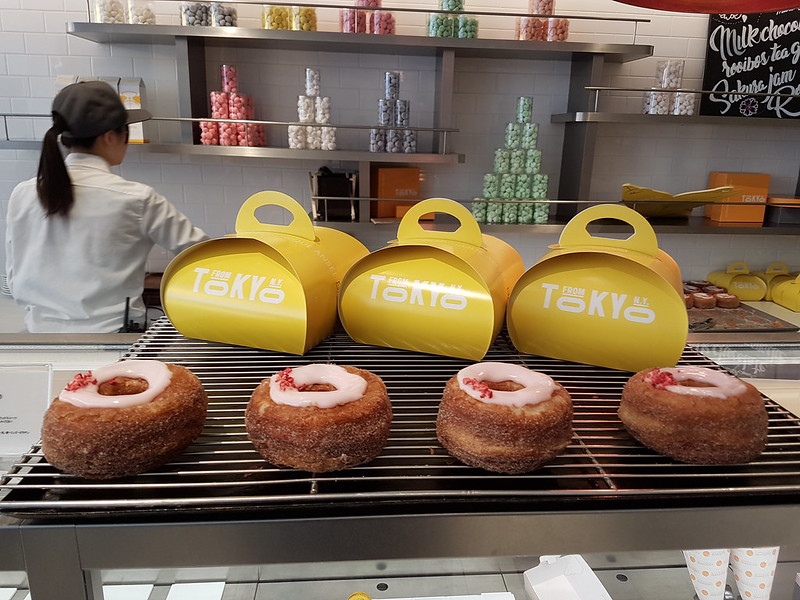 The craze for Dominique Ansel’s creations is strong with the internet filling with buzz whenever he comes up with some new creation, but the one that started it all was the cronut – a mix between a crossiant and doughnut. When I found out there was a branch in Tokyo, I had to go seek it out. Surprisingly, there wasn’t much of a line. Despite visiting during the late afternoon, there were still plenty of cronuts available. The one I had was a special sakura rooibos edition of the cronut. It was filled with sakura (cherry blossom) jam and milk chocolate ganache infused with Rooibos tea. It was incredibly sweet and way too much for one person in a single sitting.

Stand up bar sushi in Tokyo

I’m glad I didn’t find out about this place until the very end of my trip or else I likely would have eaten nothing else. I visited this sushi bar as a part of my Shibuya food tour with Arigato Food Tours. The restaurant has taken away most of the features that make a restaurant a restaurant and replaced it with one long, standing room only bar. Pieces of nigiri start at 100 yen for two pieces making this an incredibly affordable place to grab a meal. I was really pleased with the quality of fish and enjoyed every bite I was served. 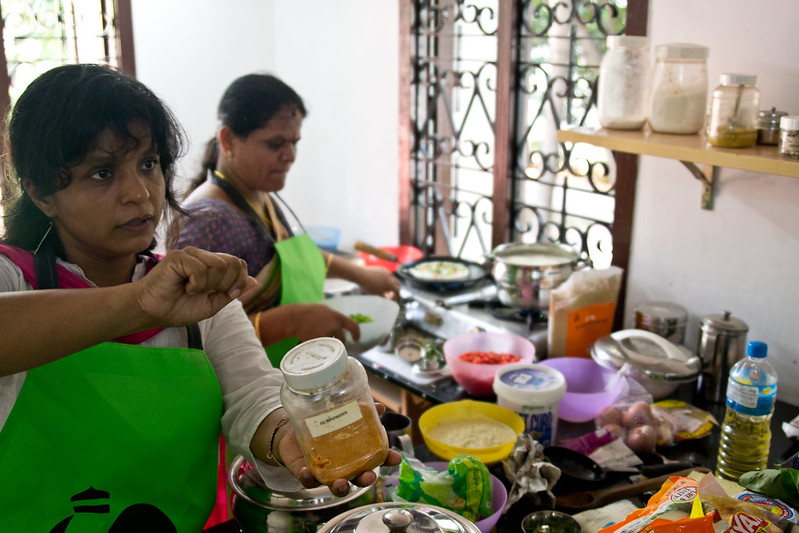 While in Chennai for my friend’s wedding, she arranged a cooking class for my other friends and me. Indian food is so different north to south, east to west. It was fascinating to see everything come together in a meal, earn about the unique spices and how they use them. Everything looked so delicious, but because I was still coming off my illness I wasn’t in the best place to be enjoying it all. That said, I tried to have a taste of everything. At least I have a bunch of recipes I can try at home. 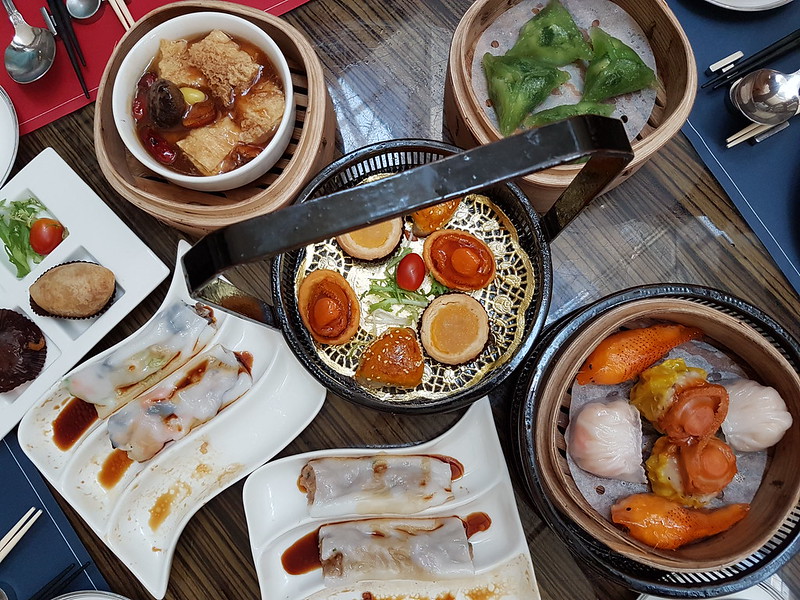 After a week of not eating much in India due to illness, I was so happy to be able to eat something I knew wasn’t going to make me sick. I only had a couple short hours in Hong Kong, but my parents and I meet up with family in the airport for some dim sum. This was fancy dim sum full of delicate and beautifully presented items. I was sad that I wasn’t able to stay longer in Hong Kong. 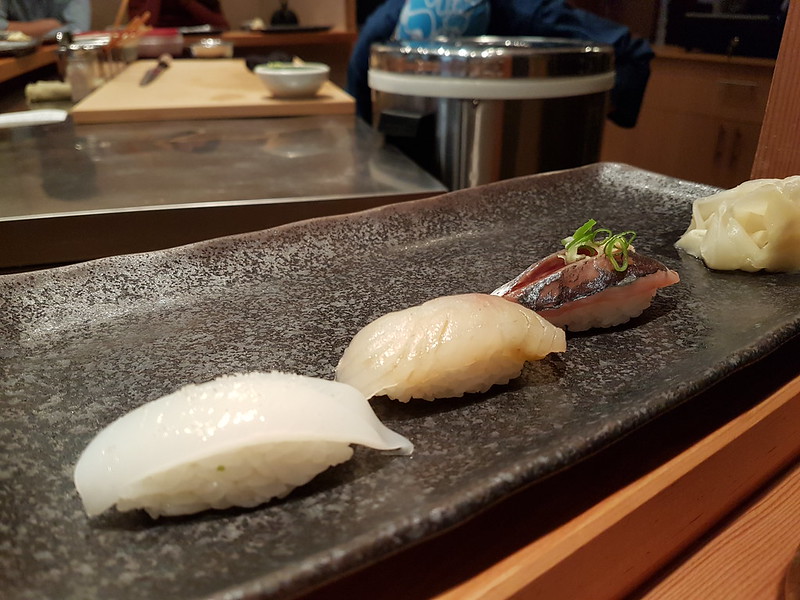 While I was in Japan, I didn’t get a chance to make a reservation for an omakase experience (in any case I would rather share that experience with someone else). Omakase means “I’ll leave it up to you” and leaves the chef to choose what to serve based on what fresh and available. We enjoyed a number of nigiri pieces that I had never had before from horse mackerel to striped jack. It was all very delicious. The whole experience felt very authentic down to the tiny L-shaped bar the chef was serving from and made me miss Japan even more.

Filet Mignon at Saltlik in Calgary 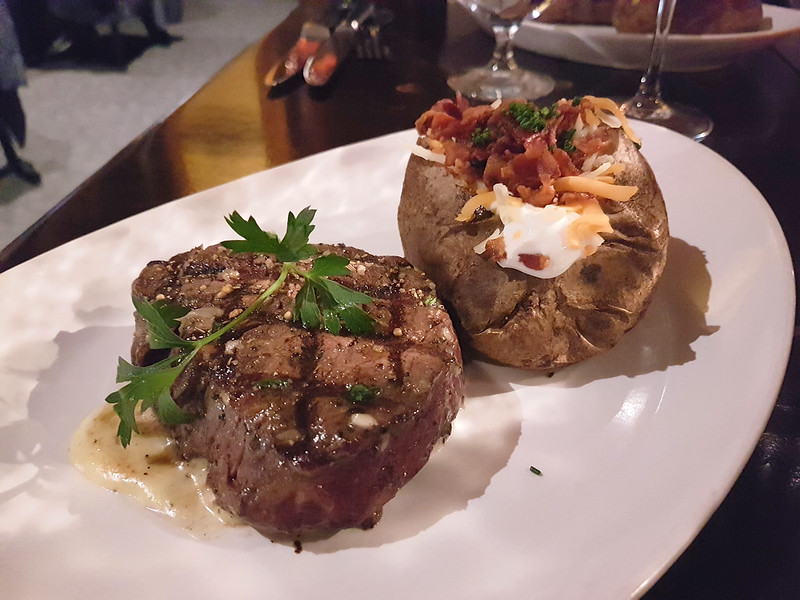 In October, I went to Calgary for a work trip and while there, a coworker and I went out to enjoy some famous Alberta beef. What followed was one of the most flavourful and tender steaks I’ve ever had. Because Alberta is beef central in Canada, the steak only set me back $40 which is a lot more affordable than anywhere else in the country. I don’t eat a lot of steak due to cost, but this filet mignon with Bearnaise sauce was fantastic. I’d definitely hop on another plane to have another one.

Tonkatsu at Katsuten in Calgary 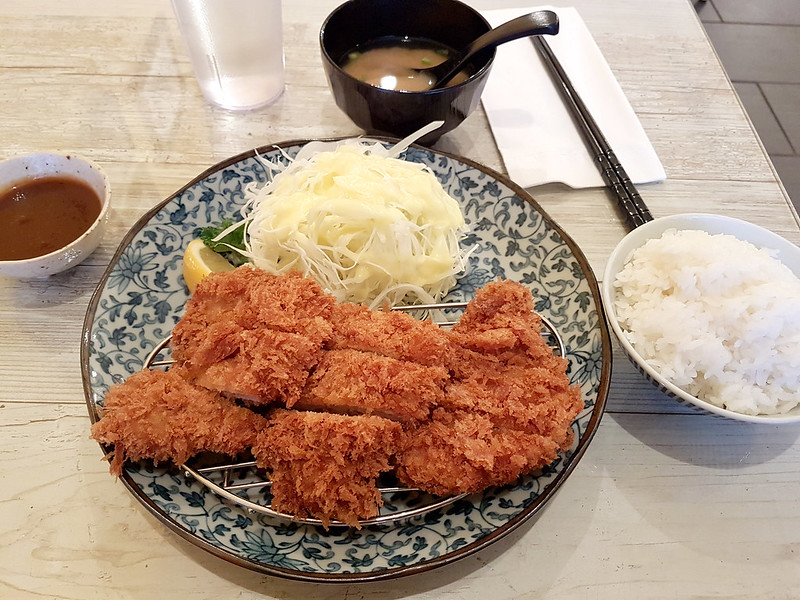 Yes, another Japanese meal. I definitely love Japanese food in all shapes and forms. When I visited Calgary, I didn’t expect them to have much in terms of Asian food and mainly thought of beef, beef and more beef. However, I was pleasantly surprised by the food scene in Calgary, and especially by this place which specializes in katsu. Served next to a bed of cabbage, the katsu was so tender and flavourful. The entire experience felt very authentic. I wish this place was in Vancouver so I can have it whenever I want!

So there you have it – the best of everything I ate in my travels and around Vancouver in 2017. It’s so focused on Japanese food and makes it pretty clear what my favourite type of cuisine is right? Here’s to another year of good eating in 2018!

What have been some of your most memorable meals in 2017?