You are here: Home / Inspiration / 7 Dream Places I Can’t Get Out of My Mind
Some posts on this site contain affiliate links, meaning if you book or buy something through one of these links, I may earn a small commission (at no extra cost to you!). You can read my full disclosure policy here.

Being a part time traveler, I’m in a constant state of flux, alternating between trip planning and daydreaming about places that I want to go explore. Right now I’m in the middle of a daydream phase. While I’ve been able to go on a handful of trips in recent months to Portland, San Francisco and Tofino, none of these places are new to me.

I’m really looking forward to exploring places completely foreign and different. There is something so exciting about going somewhere you’ve never been before. But until then, I’ll have to dream. Here are the top places currently on my mind.

When I was living in Budapest, I had a trip planned to do a mini-tour of Spain visiting a handful of cities including Madrid, Seville and Barcelona. However, life always has some way of mixing things up and I wasn’t able to go on the trip at the last minute. One of my really good friends lives in Madrid and I would love to go visit her. I’m a big architecture fiend and being able to see all of Gaudi’s work in Barcelona would be amazing as well. Not to mention eating all the tapas that I can get my hands on!

Growing up, I always loved a good underdog story which is why The Mighty Ducks movie series was one I regularly watched and re-watched. One scene in the second movie of the series (D2: The Mighty Ducks) was especially memorable as the coach of the US team went out with a trainer on the opposing team (Iceland):

For some reason, that quote always stuck with me and what the character says is absolutely true. Iceland is beautiful. With stunning waterfalls, geysers, and national parks to explore, the beauty of Iceland is calling my name. I can’t wait to soak in the Blue Lagoon, go chase the Northern Lights and drive the Golden Circle. Icelandic Air has recently started flying from Vancouver and offer long layover options in Iceland. It’s only a matter of time before I take them up on this offer. Perhaps on the way to Spain? 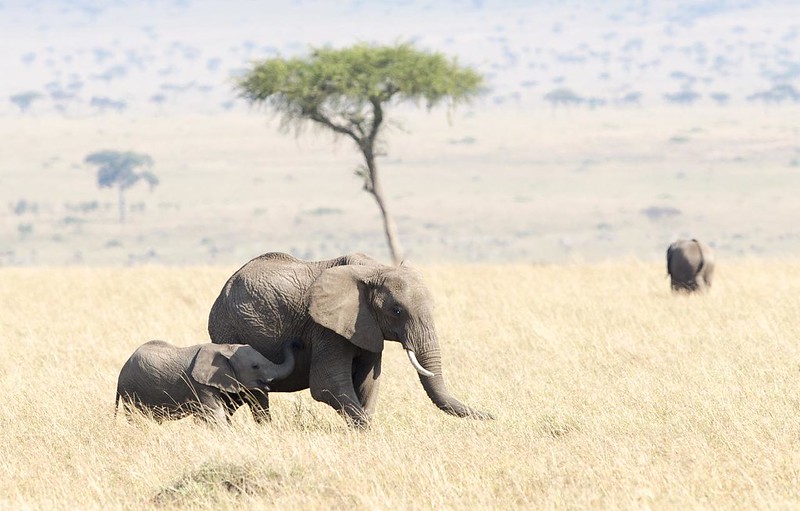 Elephants in Masai Mara in Kenya // Photo: Christopher Michel (Check out the rest of his shots – stunning!)

Going to Africa was never high on my places to explore list when I was growing up, but all that changed in when a past boyfriend went to Kenya and Tanzania with his family. When he came back he had these fantastic tales of majestic animals spotted on his safari, the beautiful landscape and amazing people that he had met. I wanted to experience it all for myself. That said, I’m open to any African nation where I’d be able to go on a safari!

I’m a major Lord of the Rings fan and I would love to see the country where it was filmed. I long to wander through Hobbiton, explore the Weta workshops where props and costumes were made, and walk into Mordor. Not to mention, the whole country is simply stunning. I met a bunch of people from New Zealand when I was in Budapest, plus half the team I was working with was from there, and they’ve all managed to convince me that I’ll need a month to thoroughly explore what this country has to offer.

My reasons for wanting to go to Vietnam are purely for gluttonous reasons. Simply: I love noodles and hot, steaming bowls of noodle soup are calling my name. Pho, Bún Bò Huế, rice noodles, thick noodles – you name it, I want it. And then there are the spring rolls, banh mi sandwiches, rice dishes, and Vietnamese pancakes to be had. Between all that eating I’ll try to make time to explore Hanoi’s Old Quarter, the beaches of Nha Trang, the cute streets of Hoi An, the rice terraces of Sapa, and history in Ho Chi Minh City.

It’s pretty incredible that within the United States there is so much diversity in one country. Aside from a visit to Disneyworld in Florida and the airport in Dallas, I haven’t spent much time in the south. New Orleans, with its French influence, would be a fascinating place to visit. Wandering through the French quarter, experiencing Mardi Gras, and relaxing to jazz music with a cocktail in hand is what makes The Big Easy unique. I dream of sinking my teeth into a freshly fried beignet at Café du Monde, chowing down on a po-boy and exploring the Cajun and Creole food scene in the city. Someone will have to roll me home!

I purposely left this one last because I’m actually doing it later this year! My friend and I snagged tickets during a flight sale and will be spending a couple weeks wandering around the land of the rising sun. For the longest time, Japan has completely fascinated me. It has such a unique culture, almost untouched considering today’s modern age and globalization. Not to mention the FOOD. I’m looking forward to getting my fill of sushi, sashimi, and ramen.

Not surprisingly for me, many of my dream destinations revolve around food and unique things that I can eat along my travels. It was hard narrowing it down to just a few top places though. The simple truth is that I want to go everywhere at some point. Hopefully I’ll be able to make these trips happen soon rather than later!

What are some of your dream destinations? How do you pick where you want to go?

« Keeping It Weird in Austin, Texas
Five Must Visit Museums of Boston »