You are here: Home / Destinations / Surprises and First Impressions of India
Some posts on this site contain affiliate links, meaning if you book or buy something through one of these links, I may earn a small commission (at no extra cost to you!). You can read my full disclosure policy here.

I was really apprehensive about going to India. I thought that I would hate it. Based on everything I’ve seen about the country and heard from others, in my head, I was totally expecting the worse.

But you know what? It wasn’t as terrible as my head made it out to be ahead of time.

Instead, I was pleasantly surprised by my time in India. Sure, I had my moments of WTF and pain (more about this later), but overall, I’m glad I went and saw it for myself. That’s the whole point of travel, isn’t it? To open your mind and heart to new experiences and culture. And to learn about these things firsthand and be able to have your own opinion based on your own experiences. 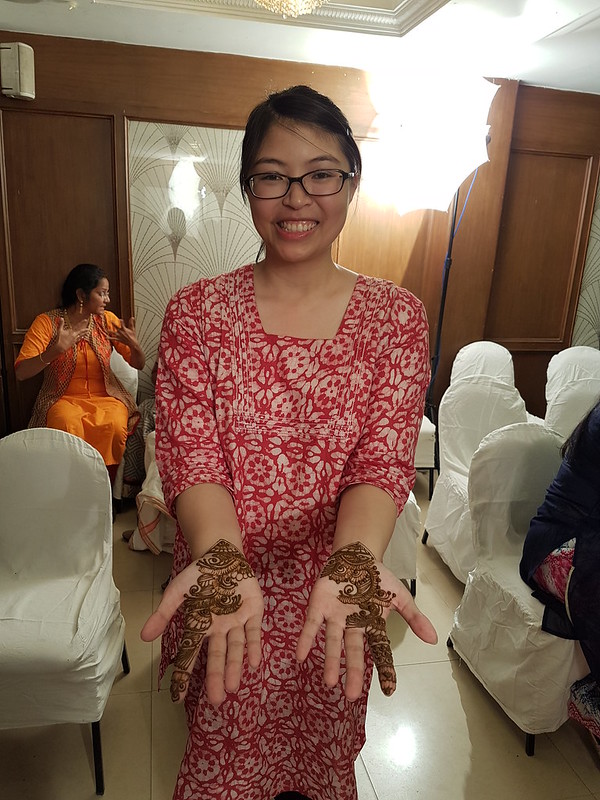 Getting my Mehdi done for my friend’s wedding.

India is just so completely different to anything else that I’ve ever known or seen. It was so eye opening and I feel like I learned so much about myself and the way I travel, even though it was such a short trip. With that said, w=here are some immediate impressions and thoughts I had during my time in India:

It’s much greener than I thought it would be 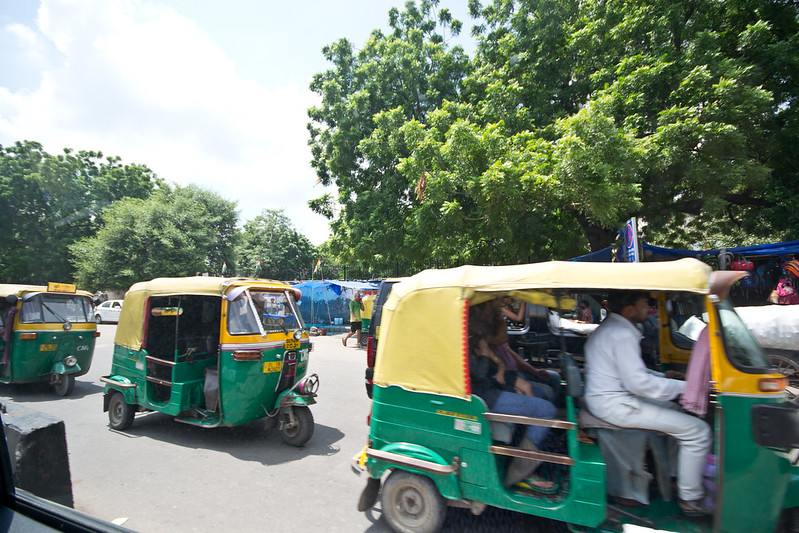 So many trees and bushes lined the streets of New Delhi.

Being such a hot country, I thought that much of it would be like the prairies or deserts of North America. Not so at all. Everywhere I went, I was able to spot lush greenery. Especially in New Delhi. Trees lined the roads we were driving along and we visited numerous parks that were overflowing with flora. Even when we were driving between New Delhi and Agra, the land we were passing by was quite green and in many ways reminded me of the farmland and scenery I see outside my window when road tripping at home.

There really are cows that roam the street 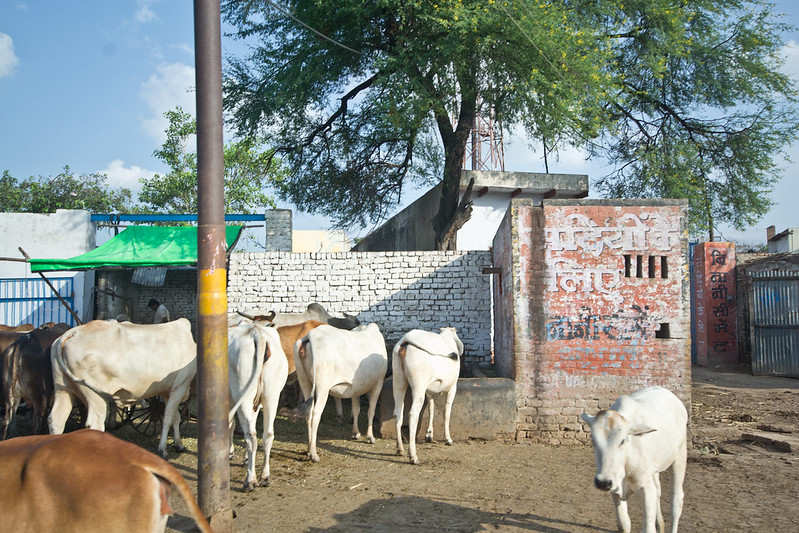 Cows by the side of the road getting fed

I had heard about this, but until I saw it with my own eyes, I found it so hard to believe. Hindus consider the cow sacred and allow them to roam freely on the streets. Traffic zip around them, people walk next to them and the cows don’t have a care in the world. It’s like they know they can get away with anything and that people won’t hurt them. I saw so many cows just hanging out in the middle of the street, staring down traffic and not budging even if a horn is blaring at them. Also, the consumption of beef is quite rare and in some states even illegal. When trying to seek out a Subway sandwich to feed my ailing stomach, I was amused to see that many items were made from lamb or chicken instead of beef or pork (due to India’s Muslim population). 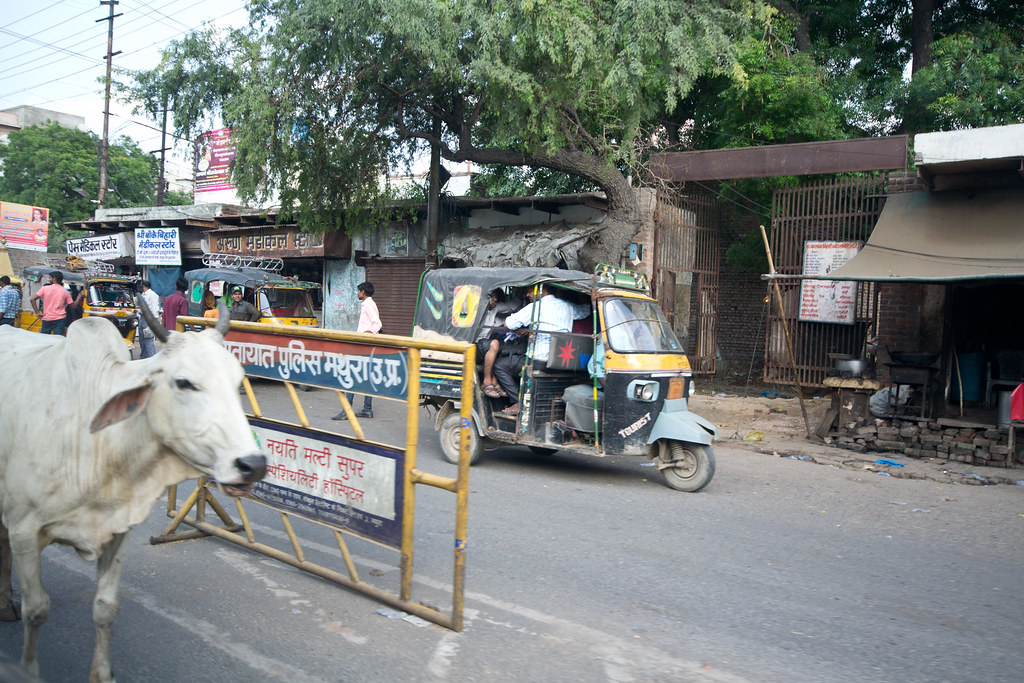 A cow without a care in the world in Vrindavan

The novelty of spotting a cow shopping or roaming on the road was never lost on me much to the amusement of my family’s guide. Every time I spotted one, I’d pointed the fact that yes, there was a cow on the street. They really didn’t care if they were blocking traffic or slowing people down. They’re so accustomed to people and automobiles, they just keep on doing whatever it is they’re doing without a care in the world. If only we could all live our lives like that!

Religion is a large part of life 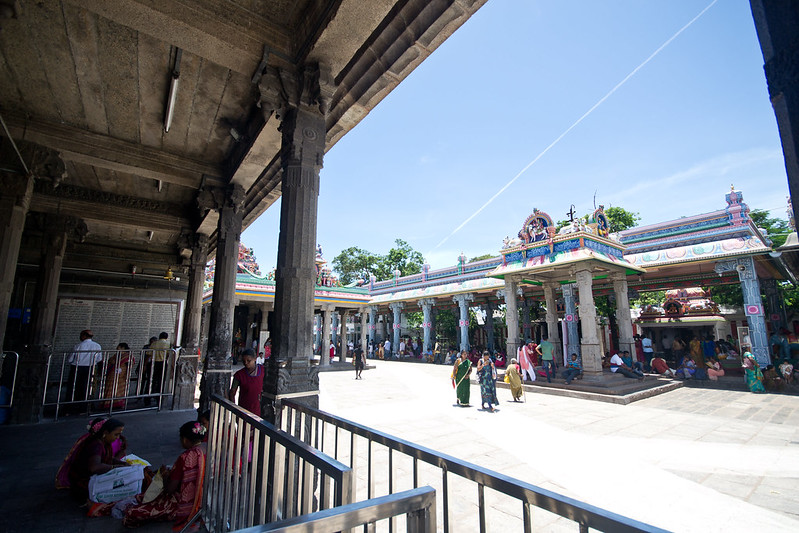 Busy day at the temple in Chennai

With a population of 1.3 billion people, I know this statement can’t be true for everyone in India, but from my visits to various temples and places of worship as a tourist, it seems like religion plays a huge role in many people’s lives. From what my tour guides were telling us, it seemed like so much of daily life is wrapped up around religious activities. Often the temples themselves do a lot to foster that community as well so I can understand why it is the way it is. 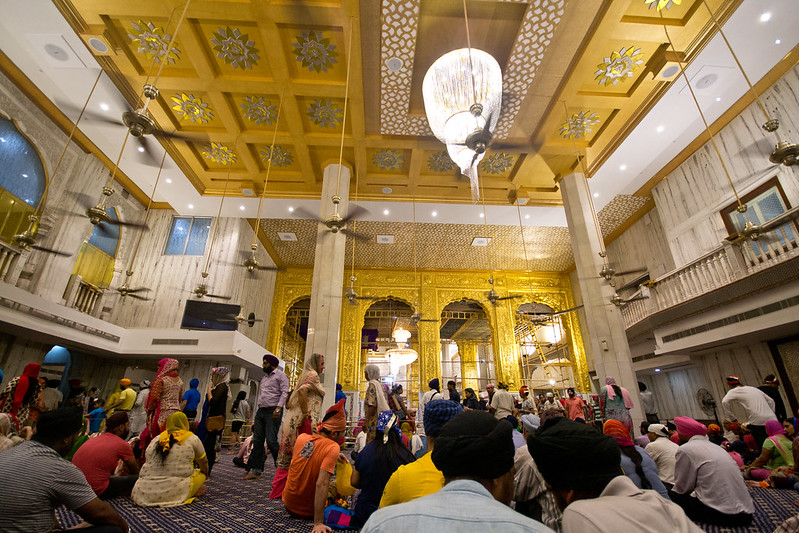 The Sikh temple in New Delhi was packed at night when we visited.

Looking for something to do? Go to the temple. Looking for a place to relax? Go to the temple. Want to reconnect with the family? Go to the temple. No matter what time I visited – early in the morning, in the middle of the day, late at night – there were always people there and even more so during evenings and weekends. Coming from a mostly secular country, this was really fascinating to observe and learn more about. Mark Twain said it best: “India has two million gods, and worships them all. In religion all other countries are paupers; India is the only millionaire.” 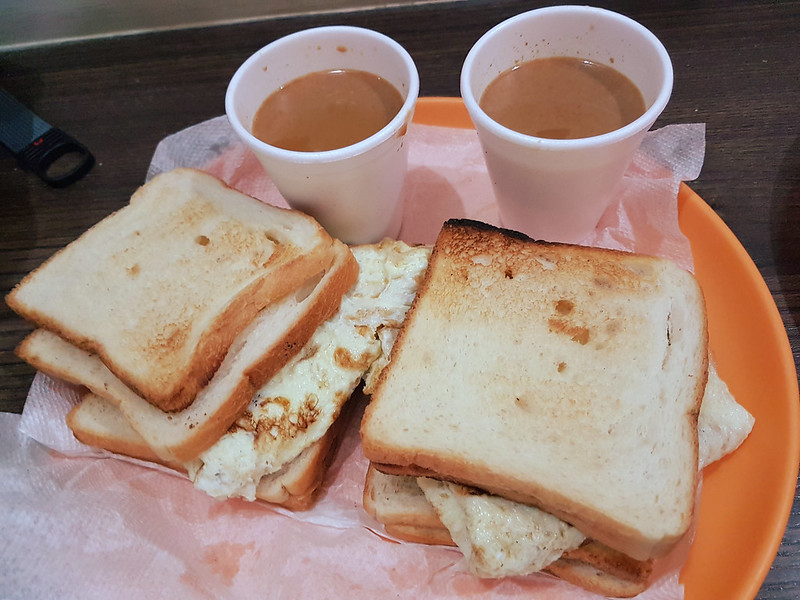 The offending too sweet tea with our breakfast

Our first morning in New Delhi, we ordered breakfast from our hotel. Tea, toast, omelettes. Simple enough right? Until we took a sip of the tea. It was the sweetest tea I’ve ever had. Even sweeter than the Hong Kong style milk tea I love so which is made from sweetened condensed milk. It was nearly undrinkable. Our guide told us about a tea where there is so much sugar in it, the spoon used to stir it can stand up straight in the cup. I’m going to guess it’s probably this khade chammach wali chai found in Lucknow. We learned our lesson and always asked for sugar and milk separate with our tea for the rest of the trip. 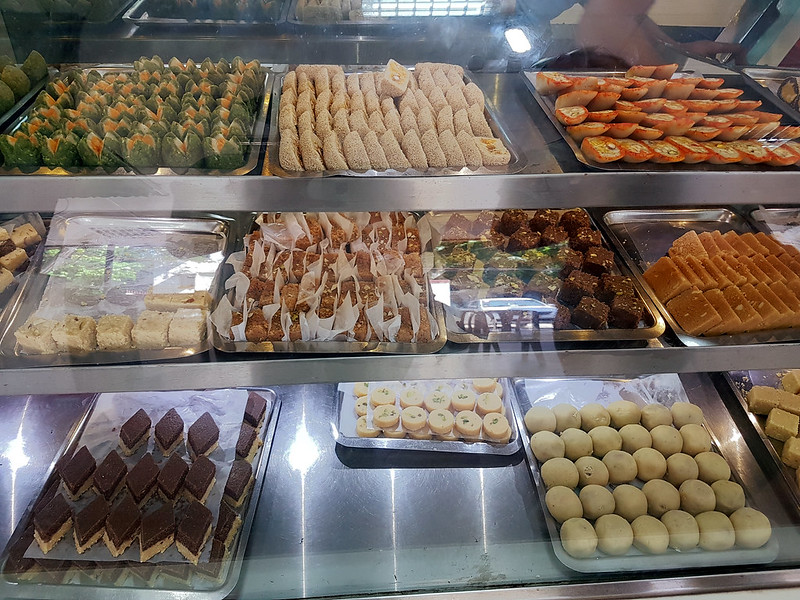 A selection of sweets at the neighbourhood bakery

It wasn’t only just the tea that was incredibly sweet. Anything we ate that was supposed to be sweet was just so sweet which is so surprising considering the North American diet has so much hidden sugar. But considering India was one of the first to consume sugar and figured out how to crystallize it from sugarcane, why should I even be surprised?

The depth of history 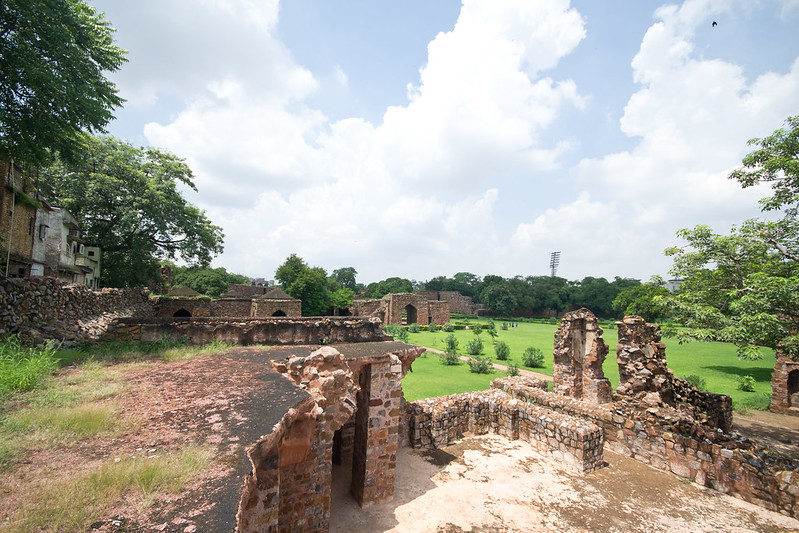 Overlooking Feroz Shah Kotla – a fortress that dates back to 1354

This may be another one of those, why are you even surprised by that, items. One of the reasons why I like to travel is so that I can explore the cultures and the history of the places I visit. Even though I’ve been to a lot of places with long histories, none of them really seem to compare to India. There just seems to be so much in the past that you can learn about and explore. So many ruins, temples, and other historical sites, that at one point or another were important in the development and growth of the country. Especially coming from a country like Canada, which just celebrated 150 years of its existence, history of this length is really difficult for me to wrap my head around.

In the West, you don’t really get a chance to learn about these things. Sure, I took social studies and history classes, but it was mostly about the USA or Europe. In my International Baccalaureate (IB) classes, we touched briefly on the history of China and Latin America as well, but the rest of the world isn’t really covered at all in our curriculum. So being able to see this history in person was great.

Just how many people there are 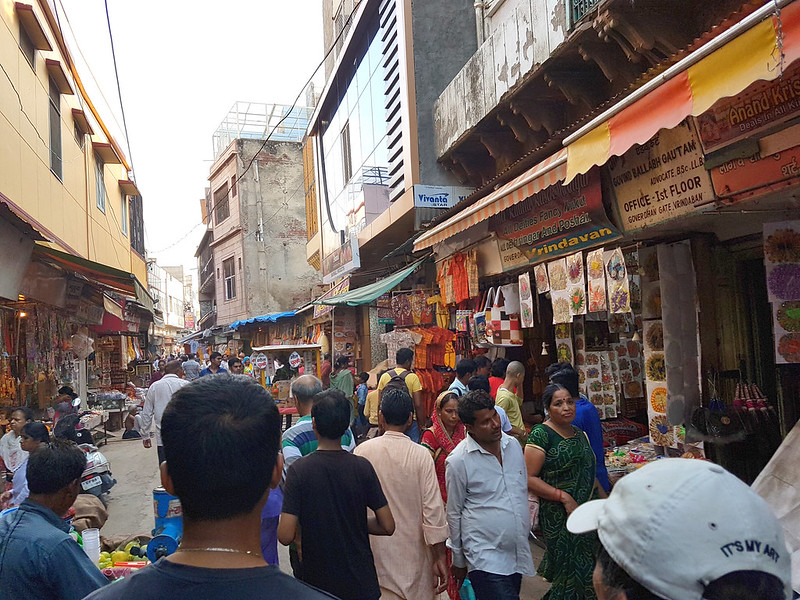 Wandering through the market streets of Vrindavan

I know this really shouldn’t come as a surprise given the population of India, but I was surprised by just how many people there are. It seems like everywhere we went there were people. Even if we went places late at night or early in the morning, there were people. We couldn’t escape them. Canada is such a huge country and we have such a small population that is so spread out, it was so different to constantly have people around.

So there you have it. Some of my first impressions and thoughts on my trip to India. I loved seeing one of my good friends get married and to reconnect with my group of girlfriends from Budapest – that alone made the trip worth it. Everything else I was able to experience in India was just the icing on the cake. While I won’t be rushing to go back anytime soon, I’d definitely be open to revisiting – except maybe when it’s not blazing hot. Now that I know what to expect and how to better prepare for a great experience, there is so much more to see!

Have you been to India? What were your immediate thoughts on the country?